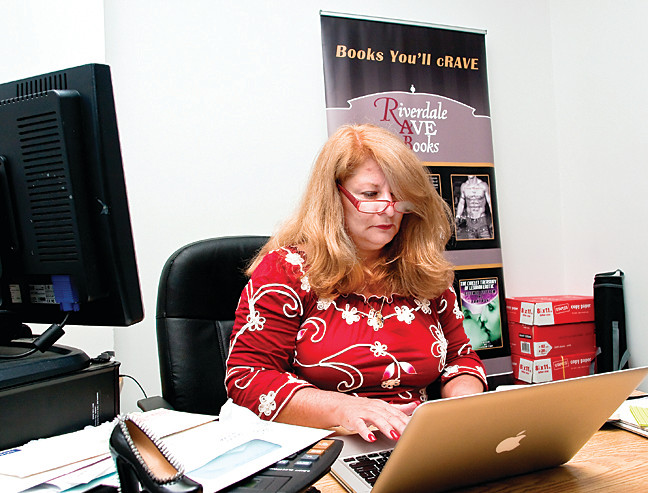 But with names like Hot for Winter: A Christmas Menage and Jockboys, Riverdale Avenue Books’ steamy sensations have surely left a few flushed cheeks along the way.

After working in downtown New York publishing, Ms. Perkins, 54, launched a literary agency and began editing Ravenous Romance’s manuscripts in 1987, and Mr. Weise, 47, started a company devoted to LGBT literature called Magnus Books in 2010. With the proliferation of e-books changing their industry, the two joined forces to create a company in December that releases digital, audio and print books from various genres.

Ms. Perkins, who has lived in Riverdale for two decades, said she snatched up space in 5676 Riverdale Ave. because it once housed Baen Books, a science fiction, fantasy and horror publishing company, and she sought to continue to use the office as a place for publishing.

After noticing that several publishing companies she admired were named after the streets in their addresses, Ms. Perkins and Mr. Weise decided to name their company Riverdale Avenue Books.

“It has tradition,” said Ms. Perkins. “And I like putting Riverdale on the map.”

During its first eight months, Riverdale Avenue Books released a spinoff of the blockbuster Fifty Shades of Grey titled 50 Shades of Gay, which catapulted to the top of Amazon’s best selling list for gay erotica in February. The book was an alternate for the Book-of-the-Month Club, a mail-order organization that has supplied generations of Americans with classic reads. This summer the company was lauded again when the Lifestyle Mirror magazine included Spank Me Mr. Darcy, an eroticized take on Pride and Prejudice, in its list of the 11 best beach reads.

While its amorous titles have received the most accolades, Riverdale Avenue Books publishes other genres.

Some of the stories they put out are sobering, highlighting topics often overlooked in the literary world. Mr. Weise said they have reprinted Read My Lips, one of the primary texts in modern transgender memoir literature, and are currently working on an anthology about violence experienced in the gay community.

“We do have an anthology on gay men and prostate cancer, which is the first book of its kind,” said Mr. Weise, who is the editorial director of Magnus Books, which he launched in 2010 and then incorporated into Riverdale Avenue Books. “It fills an important area.”

The company’s emphasis on e-books has allowed them to publish titles much more quickly, editing and publishing books in weeks, rather than the 18 months it typically takes to finish a traditional book.

“In a year and a half, what’s popular and selling now might not be popular,” said Mr. Weise, who has authored four books, mostly on the Civil Rights Movement. “They can take down Defense of Marriage Act (DOMA) and I can go to a journalist and say, ‘I want you to take two weeks and give me 30, 40 thousand words, whatever you can do.’ And we can have that up in a month. In the old days that would have been impossible.”

Only recently, with the success of E.L. James’ Fifty Shades of Grey, has she seen so many people publicly share her passion for erotica. Ms. Perkins said erotica has always been profitable, but now it’s much more so.

“I really think it’s terrific to have women’s sexuality part of the every day discourse because male sexuality has been part of the discourse every day for my entire adult life,” said Ms. Perkins, who has written four books and edited several erotica anthologies. “We grew up with ‘Penthouse’ and ‘Playboy’ and it was like, “Well yes, that’s for men.’ … Now, the men have to go, ‘Well there’s E.L. James and that’s for women.’”

Perhaps the day is approaching when Ms. Perkins will no longer feel obliged to host her monthly erotica readings, known as Between the Covers, at the Happy Endings Lounge in the East Village, where she has gathered fans of the genre for the past two years. After all, the New York City Public Library system gave its adult summer reading initiative the same name last year.