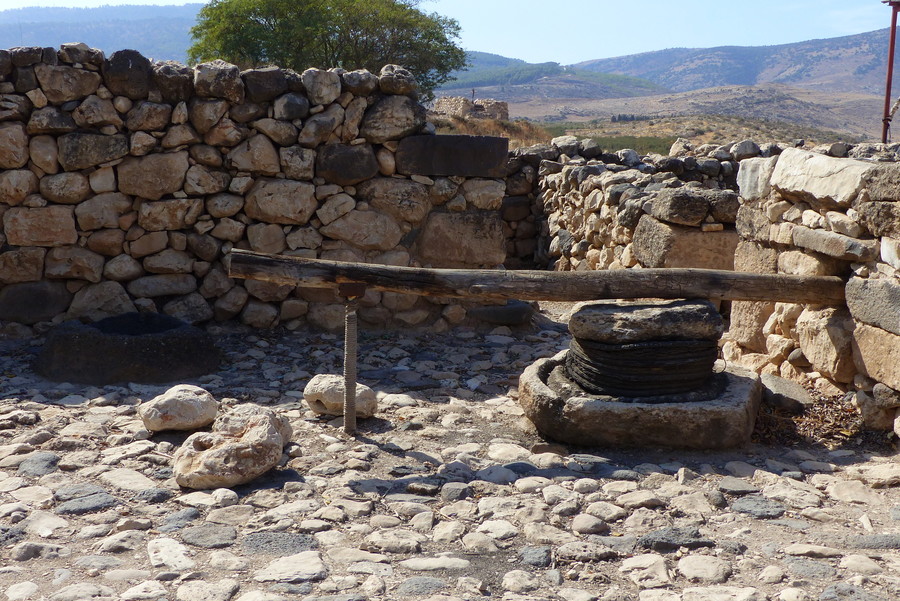 An oil press from the eighth century BCE at the Hazor excavation site in Israel.
Sura Jeselsohn
By Sura Jeselsohn

Over the years, the Metropolitan Museum of Art has hosted several Van Gogh exhibitions. I particularly remember the magnificent fields and trees from the 1986 exhibition entitled “Van Gogh in Saint-Rémy and Auvers.”

One especially glorious painting was called “The Olive Orchard.” Apparently, Van Gogh was not the only artist enchanted by olive trees; they fascinated European painters from El Greco to Monet and Americans including John Singer Sargent and William Merritt Chase.

For many years, we come to Israel for the holiday of Sukkot — the Harvest Festival. The weather in Israel is generally milder than in New York and the entire country is caught up in a holiday mood.

Nothing in my New York garden qualifies for a real harvest. However, we have the opportunity to participate in an olive harvest – a masik – while we are in Israel during this season. You can always tell the importance of an event when a culture has a specific word for it and it alone. The word masik applies exclusively to the harvesting of olives.

We return yearly to a hillside orchard planted by the Drs. Amy and Michael Rosenbluh.

In their professional lives, the MIT-trained Michael is chairman of the physics department at Bar Ilan University; his specialty is light and its interaction with matter. Amy works as laboratory and production director for Izun Pharma, Ltd. — a research company that develops medical devices and pharmaceuticals to treat inflammatory and chronic wound conditions.

The orchard grows two different species of olive trees, the Barnea, developed at the Volcani Institute in Israel — a research institute for dealing with Israel’s agricultural and water issues — and the Tzouri. The Barnea was chosen because it has a high oil yield, and its milder taste is more appealing to Western palates. It does, however, require irrigation. The Tzouri has a larger, rounder fruit, yielding a more pungent oil but it does not require additional water. This combination guarantees the Rosenbluhs a more reliable harvest and a unique blend of oil bouquets.

Last week we went to the Rosenbluhs to participate once again in the masik. Tarpaulins were laid underneath the trees and the lower branches were stripped by hand of their fruit – which starts off green, ripening to an eggplant purple and finally to black.

The olives are stripped from their branches, gathered up and poured into burlap bags for ultimate processing. Their oil has found a ready market as the boutique brand “Tzuf Olive.”

The life of an olive farmer is not easy, however. Olives are subject to several diseases and pests including the olive fly, peacock spot fungus and the olive moth.

Since the olives are being grown organically, there are limited methods available to control these pests. Feral pigs are also a terrible problem. They are drawn to the orchard primarily for the water provided by the irrigation. In the process they uproot new saplings, chew up young trees and destroy irrigation hoses.

Yesterday we went to Tel Hazor, which is an enormous excavation of layered Canaanite and Israelite cities in the Galilee. We had been there before and I had strong memories of the extensive and impressive water system, which I wanted to revisit. The water system – built by the Jewish King Ahab - was indeed as impressive as I remembered, with 148-foot shaft dug through basalt.  There was, also, a Canaanite ceremonial palace and layered remnants of a huge city that housed up to 15,000 people and existed for 1000 years.

Why bring up Hazor now? Ancient olive presses are found in excavations all over Israel. In Hazor, they had a particularly well-preserved press that clearly illuminated the process. The olives were first crushed in a basalt basin. Then they were placed in woven reed baskets and set atop the press bed. Pressure was exerted by a beam from which stone weights were suspended. Finally, the oil was collected in a jar buried in the courtyard floor.