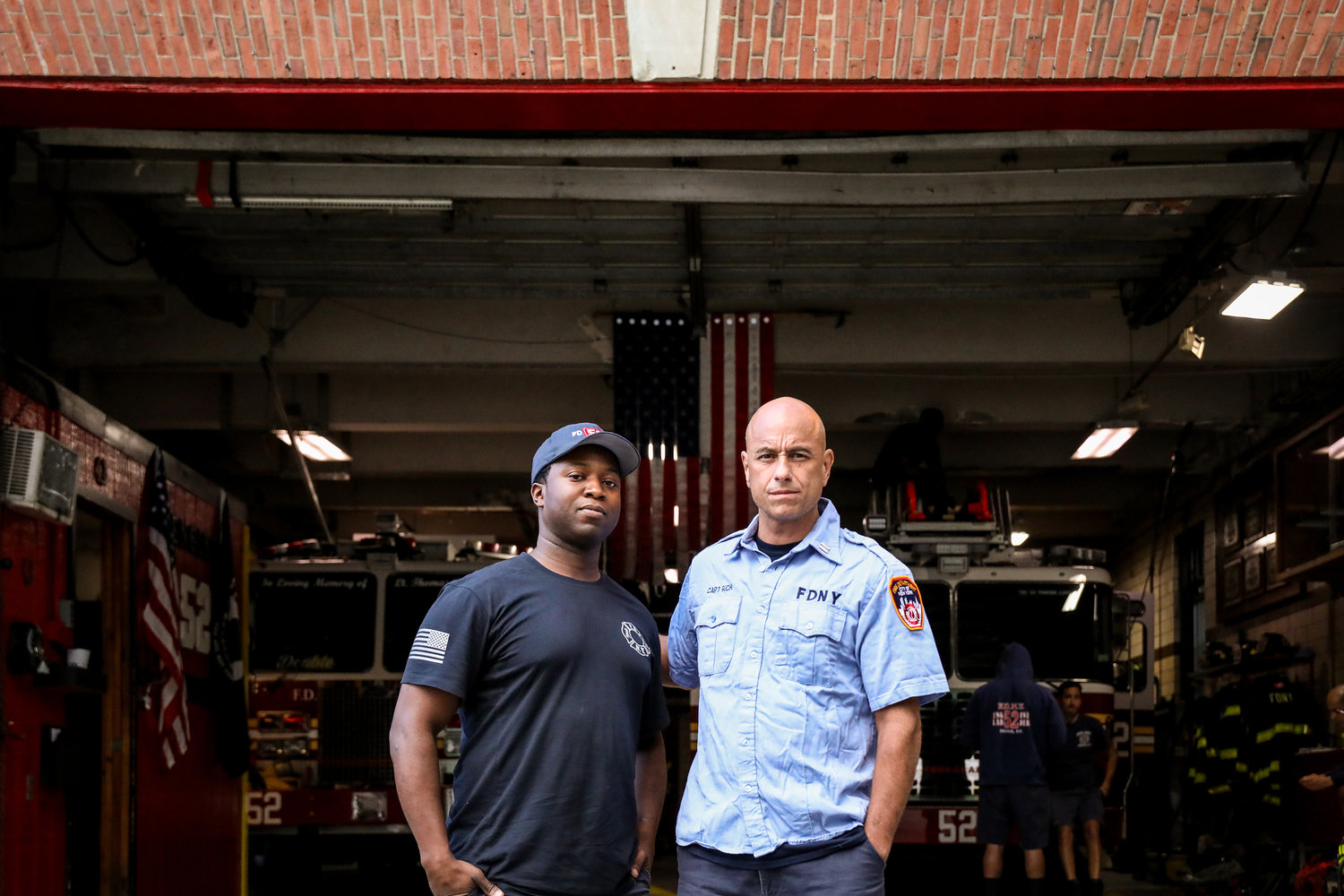 Jonathan Gilliam, left, and Capt. Anthony Rich stand outside the Ladder 52 firehouse. Both have led similar career paths leading them to the New York Fire Department, yet they have different memories of Sept. 11, 2001.
JOSEPH DE LA CRUZ
By JOSEPH DE LA CRUZ

For many alive and of age on Sept. 11, 2001, the memories of what happened that day are as clear as a crystal.

But few more than first responders like Capt. Anthony Rich of the New York Fire Department’s Ladder 52, who can relive each moment of that day with so much clarity.

“That morning, I wasn’t at work,” he said. “I actually was home with my wife that day. I was getting ready to go out and lay some tile for a friend of mine in church and that didn’t happen.”

As soon as American Airlines Flight 11 crashed into the north tower at 8:46 a.m., the fire department recalled everyone. But Rich — who professes to not being a big television watcher — says he didn’t even know what happened until a neighbor caught him up that morning.

Unfortunately, an explosion at the World Trade Center was nothing new. Just eight years before, a truck bomb exploded in the parking garage beneath the north tower, intended to cause one tower to topple into the other.

Rich’s brother worked for a Wall Street firm at the time, and was one of more than 50,000 who were evacuated from the building after that lunchtime terrorist attack. He still worked there in 2001, so naturally, Rich called his brother to make sure he was safe.

After that, Rich gathered his family as well as his nieces and nephews from school, dropping them all of with his sister-in-law.

It wasn’t until all that was done Rich realized the day would be anything but normal.

“I remember getting in my car and jumping on the Belt Parkway, which was empty because the cops weren’t letting anybody on,” he said. “I remember that stuck out as being strange that day.”

Rich was allowed access after flashing his badge. He raced to Engine 210 in Brooklyn’s Fort Green neighborhood, grabbed his gear, and then waited for a bus to take him and his fellow firefighters into lower Manhattan.

By the time they arrived, both towers had already collapsed. The 23-year veteran and the rest of Engine 210 ultimately witnessed 7 World Trade Center collapse more than eight hours after the first plane had crashed.

“My brain didn’t allow me to think that it was a building falling down,” Rich said. “What I thought was because everything is on fire, there’s smoke everywhere. So I just thought that winds maybe took some smoke from behind and” blew it off of the building.

“In fact, I had a particle — a rock or a piece of concrete or something — hit me in my eye as it collapsed.”

On that day in 2001, Rich had only been with the fire department for four years. He would spend the next two days working at Ground Zero during the initial rescue and recovery operations.

“It took a lot out of you, but you had a lot of adrenaline too,” he recalled. “What I remember thinking was, ‘Man, I never realized my helmet was so heavy.’ Wearing that helmet for that long was a lot.”

Fortunately, no one from Engine 210 was lost that day, according to Rich. But the same couldn’t be said for 343 other members of the New York Fire Department, who lost their lives running into the buildings when everyone else was running out, intent on saving as many lives as possible that day.

Reflecting on the days after the attack, Rich said he was fortunate not to have lost any close family members or friends. Still, dealing with the events of Sept. 11, and the days after, is not easy for him to deal with. Even 20 years later.

“I was angry, that’s how it was for me,” he said. “My wife would tell me that I was angry in a way that she didn’t really recognize for a while after that. But that went away eventually.”

But not everyone has the detailed recollections that day of Rich — even at Ladder 52. For others, the events of Sept. 11 are a vague and distant memory.

“I believe I was in school,” said Jonathan Gilliam, another firefighter at the Henry Hudson Parkway station. “I mean, I remember it being on the news, but that was about it.”

Gilliam was just 11 years old in 2001, living in South Carolina. Still, even with much more limited exposure from hundreds of miles away, Gilliam knew it would become a day that would change the nation forever.

Especially these days, at 31 — the events of 9/11 have a far greater meaning for Gilliam now that he wears the uniform.

Gilliam joined the fire department just over two years ago. Before that, he was a first responder of a different sort — working under the fire department’s umbrella, but as an EMS technician. It was a career path he pursed for nearly a decade.

But the draw of fighting fires was something Gilliam said he couldn’t resist, because he thought it was cool and likened the experience of putting on a fire equipment to putting on a cape — like a superhero.

“You know, they say when you find a job you love, it’s not really a job,” Gilliam said. “Well, this is what that is. I love it here.”

While he points to his experience on the job as being a driving factor to his newly found sense of greater importance 9/11 has for him, Gilliam also cites another encounter that had a significant impact for him.

“I remember visiting the 9/11 Memorial and hearing the transmissions from that day,” he said. “It gave me a sense of understanding of what they went through, like I was living in their shoes.

“I’ve also heard the stories from one guy who works here about what he had to deal with that day. I think that’s also had an impact on me, hearing his account of what happened.”

While many of the firefighters who were on duty 20 years ago may have retired, there are still more than enough seasoned veterans who were living witnesses to the tragedy of that day, Gilliam said. Hearing those stories, for him, is important — even when it’s not the anniversary of the attacks.

“You know I always listen to the guys who’ve been here for a while,” Gilliam said. “When they talk, you just have to take it in.”