Few people knew what a coronavirus was at the start of 2020. Now we can't escape it 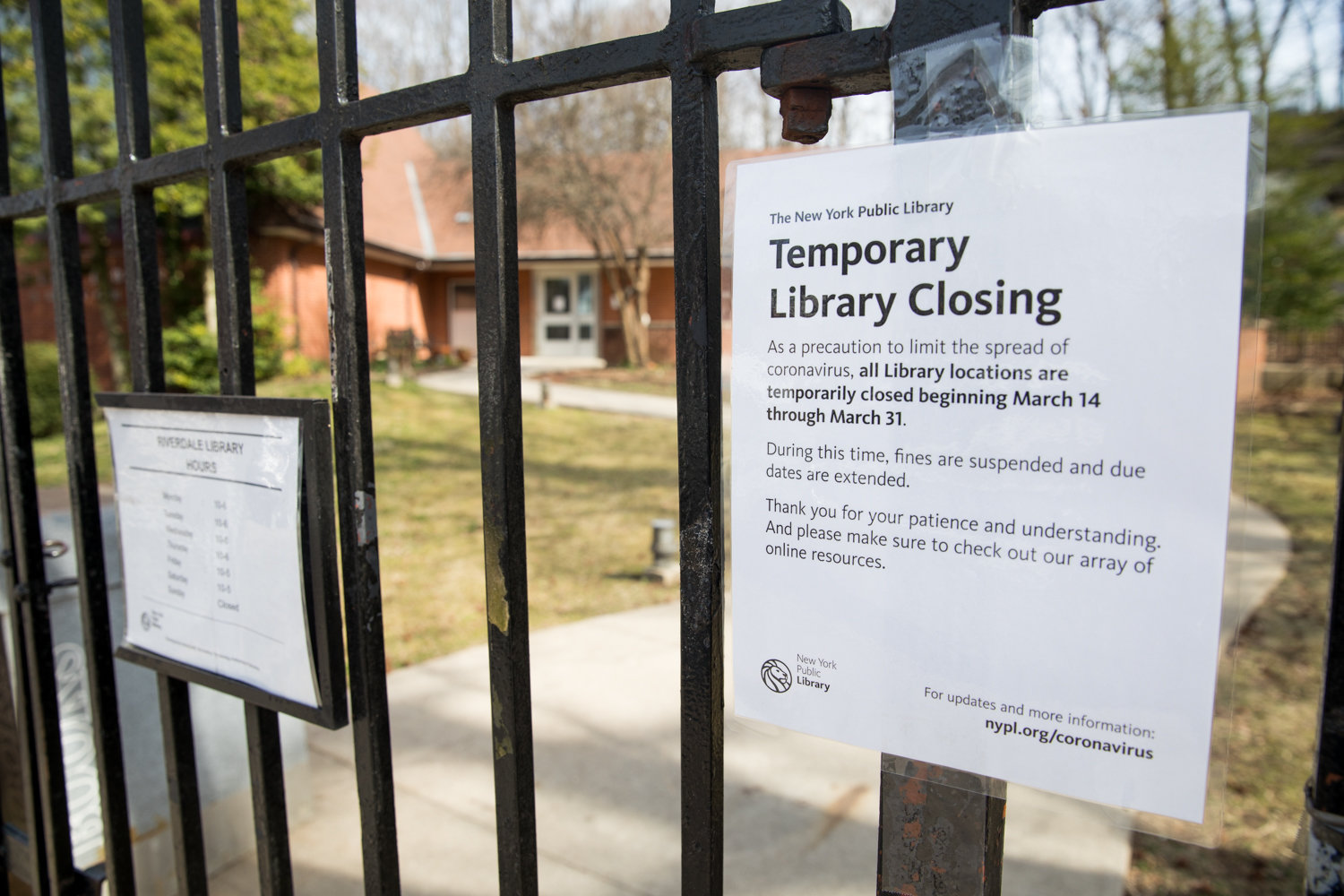 A sign announces the temporary closure of the Riverdale Library in response to the coronavirus outbreak.
JULIUS CONSTANTINE MOTAL / File 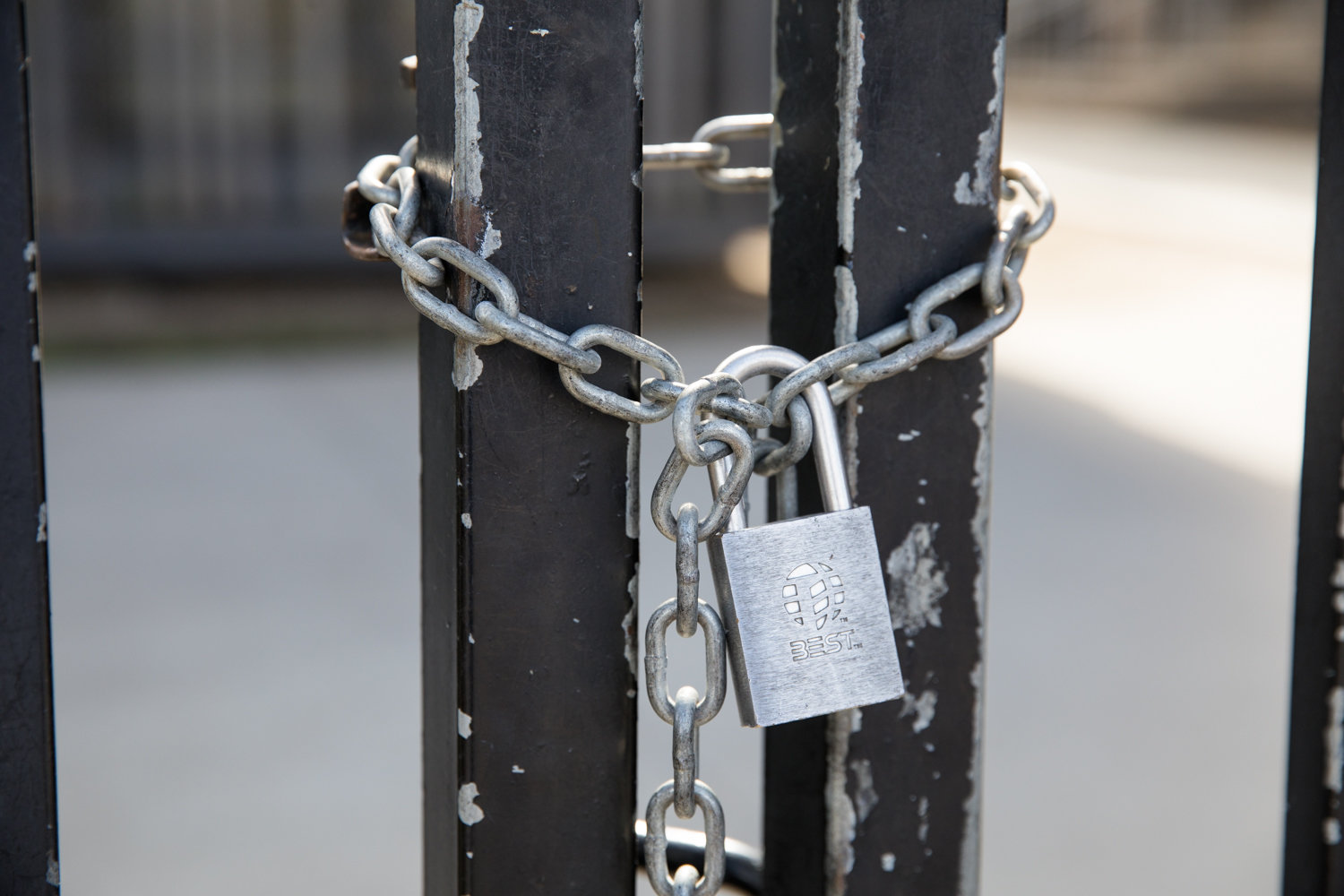 A lock and chain seals off a gate to Lehman College days after the campus was closed in response to the coronavirus outbreak.
JULIUS CONSTANTINE MOTAL / File
Previous Next
By MICHAEL HINMAN

She was a Manhattan health care worker who recently returned from Iran.

He was a New Rochelle lawyer who worked in Manhattan.

Everyday people leading everyday lives. But what they carried inside them was no everyday virus. And there was just no way they could know how it would change not just their home, but the world.

This was how our knowledge of the coronavirus pandemic started in New York at the beginning of March 2020. Later, however, we would learn that it wasn’t the actual start of COVID-19’s invasion into our state and country.

These were simply the first confirmed cases of a virus many of us were convinced would never make it to the shores of the United States. Yet, more than 365 days later, SARS-CoV-2 is still here, with nearly 29 million confirmed cases. And more than 525,000 deaths.

On March 3, 2020, Salanter Akiba Riverdale closed both its academy and high school becoming two of the first schools in the country to shut down because of the coronavirus. One of its high school students was the daughter of that New Rochelle lawyer, and she, too, would become an early positive case.

The hope at the time was that SAR could reopen its doors on March 16, just after the Purim holiday. Days later, however, some of the community’s other elite schools — Horace Mann, Riverdale Country and Ethical Culture Fieldston — shuttered their campuses as well. And by then it was anyone’s guess when these schools would welcome students again.

Then-Councilman Andrew Cohen paid very close attention to what was happening around SAR at the time, and in the surrounding neighborhoods.

“There are a meaningful number of people who have connections with SAR who could have also had other contact in the community,” Cohen told The Riverdale Press at the time. “I am not clear how many of them have been tested, but we are trying to get that information.

“I do believe that as the test becomes more widely available, it’s going to be determined that we have more people with it.”

And Cohen was absolutely right, as we would indeed find out later.

Businesses struggle, both then and now

Schools may have closed first, but restaurants weren’t far behind.

That meant every other table would be empty — an early attempt to create social distance. But New York City restaurants typically aren’t known for the amount of space they have, and that was a serious concern of David Lindsay, co-owner of the Kingsbridge Social Club, not far from Broadway and West 238th Street.

“We’re doing whatever we can to make people as comfortable as possible,” he said at the time. “So we haven’t seen a huge downturn. But I think that it’s still too early to figure out what is actually going to happen next.”

Lindsay didn’t wait long. Less than 48 hours later, all restaurants, cafes and bars were shut down. Restaurants could still deliver, and customers could even pick up. But sitting down to get something to eat? That’s a luxury many would not experience again for months.

Too many restaurants simply weren’t set up for that kind of service. And instead of offering delivery or takeout, simply shut down. Some would come back, others never would.

“We just didn’t want to take the risk any more of a customer not knowing they have it, bring it in, and then spreading it to the staff, and the staff spreading it to their families,” said Jason Farciert, owner of Frida Tacos on Mosholu Avenue. “For the well-being of the staff and the community, I just had to close.”

Buunni Coffee, still a pretty new store on Riverdale Avenue, struggled to adapt to the new normal. Businesses like this were forced to shut down, but with very little information on how such businesses could survive.

“A lot of people are talking about help for small businesses,” Buunni co-owner Sarina Prabasi said at the time. “But everything that we’ve read so far has not really been directly helpful.”

With no business revenue, paying bills — like rent — would become impossible. Yet, at that point, commercial eviction wasn’t even yet off the table.

“Ideally, we not only want not to be evicted, but we also want to reopen at some point,” Prabasi said. “And if we owe four months of back rent, that’s very unlikely that we will reopen.”

Prabasi’s words were ultimately prophetic. While she was able to renegotiate leases for other locations, the landlord of her Riverdale Avenue store just wouldn’t budge beyond the break they provided her over the peak of the pandemic.

A glimmer of hope

As society shut down, especially society in New York City, some key services fought to remain open. One of them was the Kingsbridge Heights Community Center.

“Walking in here, it’s a really creepy and eerie feeling,” Roz Rodriguez, a program coordinator for the Kingsbridge Terrace organization, said at the time. “If you come here on a regular day, there’s a lot of noise. You hear kids laughing. It’s really, really busy.”

Also quiet? New York City’s playgrounds. That move, according to Mayor Bill de Blasio, was because people visiting the playgrounds weren’t doing enough to stay away from each other as coronavirus cases peaked.

Yet, not all was lost. The shutdown — as drastic a step it was — seemed to work. “Flattening the curve” became a reality, and coronavirus cases, as well as hospital visits, were starting to plauteau.

By late April, however, there were more than 2.5 million confirmed cases of the virus around the world, and some 815,000 in the United States.

Still, life has found a way to continue on. Today, there are three vaccines slowly making the rounds, first inoculating our most vulnerable. The hope, at least from the Biden administration, is that enough vaccine will be available to protect every American adult by the end of May.

SAR — once seen as the original ground zero of the pandemic — has become a beacon of hope, especially for those looking to find the vaccine. Through the school’s chesed program — the Hebrew word for “kindness” — many like Ben and Carin Dachs finally have a chance to see their grandchildren again.

“We’ve been avoiding them specifically because of our age,” Ben told The Press last month, soon after he and Carin received their second dose of the vaccine.

“We really miss our kids, but certainly our grandkids. And Zoom and other virtual stuff just doesn’t cut it.”