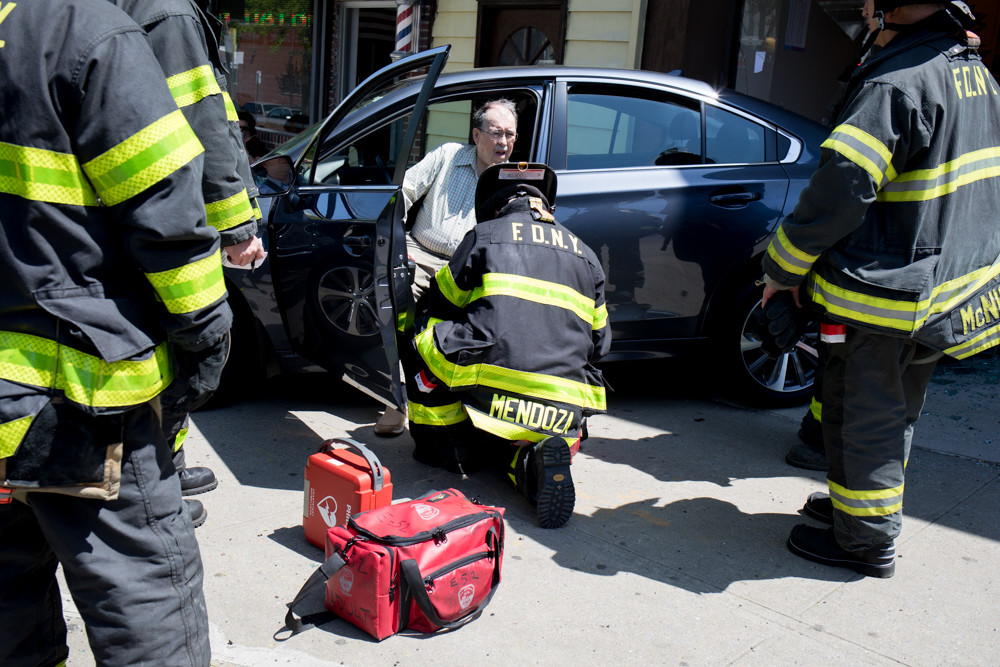 A firefighter helps the 82-year-old driver of a Subaru that crashed into the Kumon Math and Reading Center's North Riverdale location around lunchtime May 9. The man, whose name hadn’t been released as of last Monday, reportedly thought he had his foot on the break, but actually had it on the accelerator, police said, reversing his car straight into the storefront.
JULIUS CONSTANTINE MOTAL 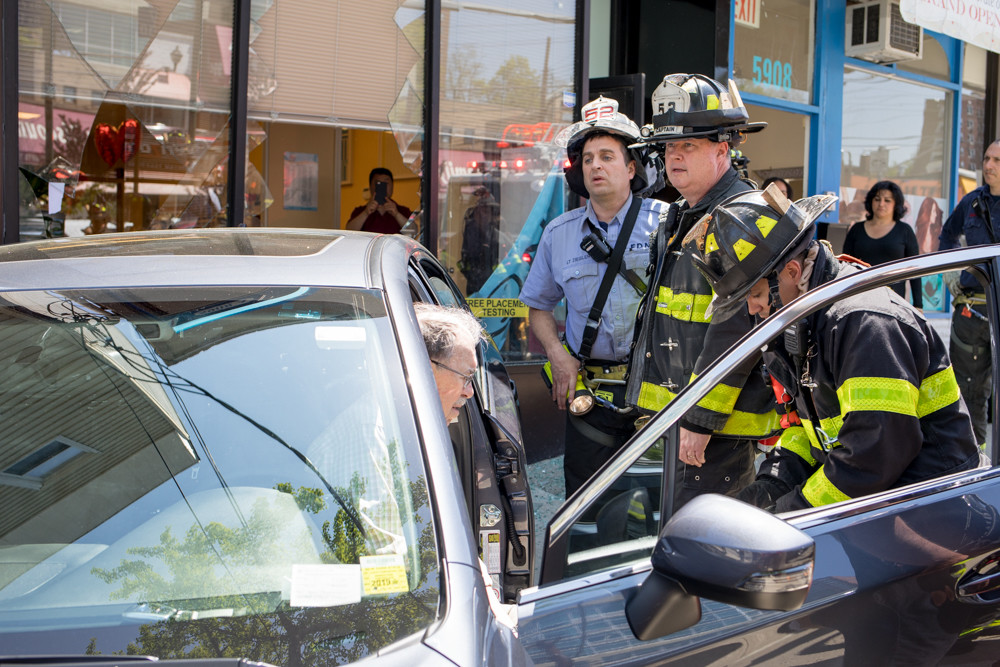 The fire and police departments respond to an accident where a car crashed into the Kumon Math and Reading Center's North Riverdale location near West 259th Street around lunchtime May 9. Police reported no injuries.
JULIUS CONSTANTINE MOTAL 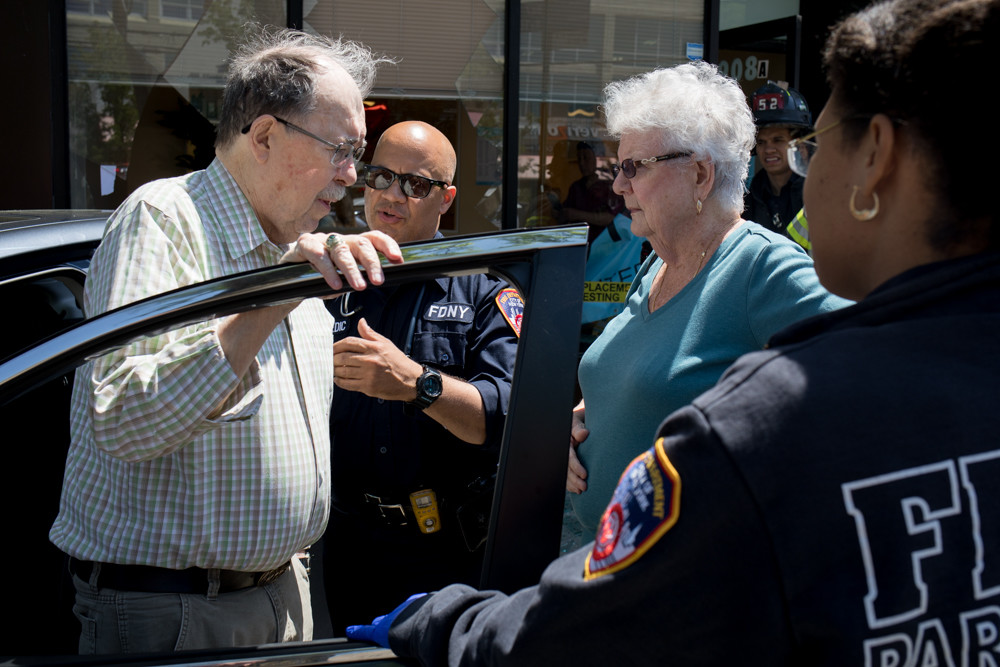 The 82-year-old Subaru driver that plowed into the Kumon Math and Reading Center at 5908A Riverdale Ave., around lunchtime May 9, gets out of his car. Police reported no injuries, and the car wasn’t towed.
JULIUS CONSTANTINE MOTAL 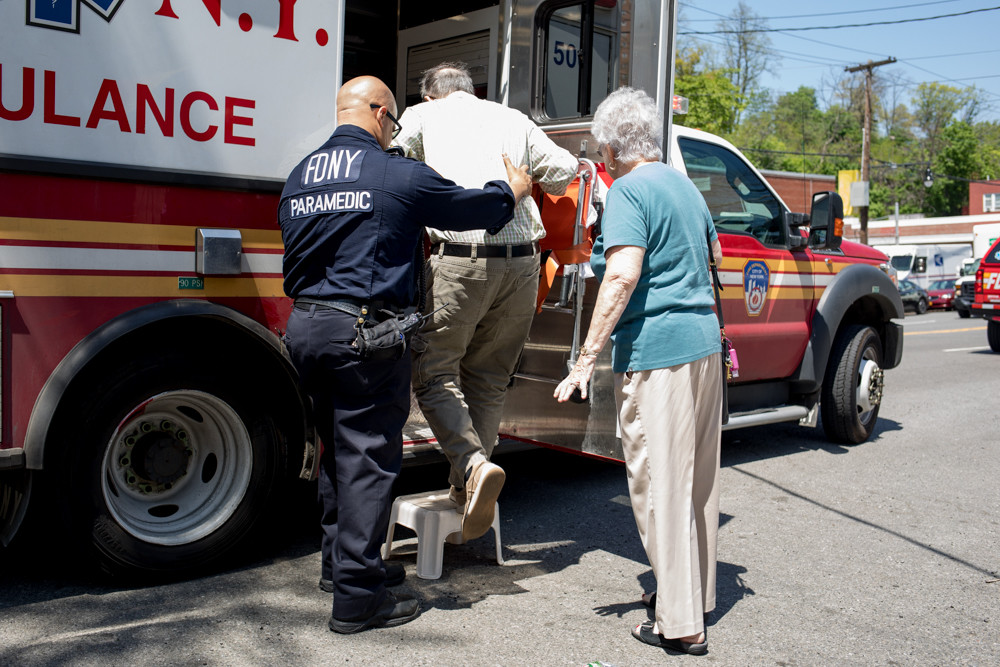 A paramedic helps the 82-year-old driver of a Subaru that plowed into the North Riverdale Kumon Math and Reading Center May 9 into an ambulance. The driver narrowly missed instructor Claire Kim, who said she’d stepped outside to check the mail right when the Subaru slammed into her storefront.
JULIUS CONSTANTINE MOTAL 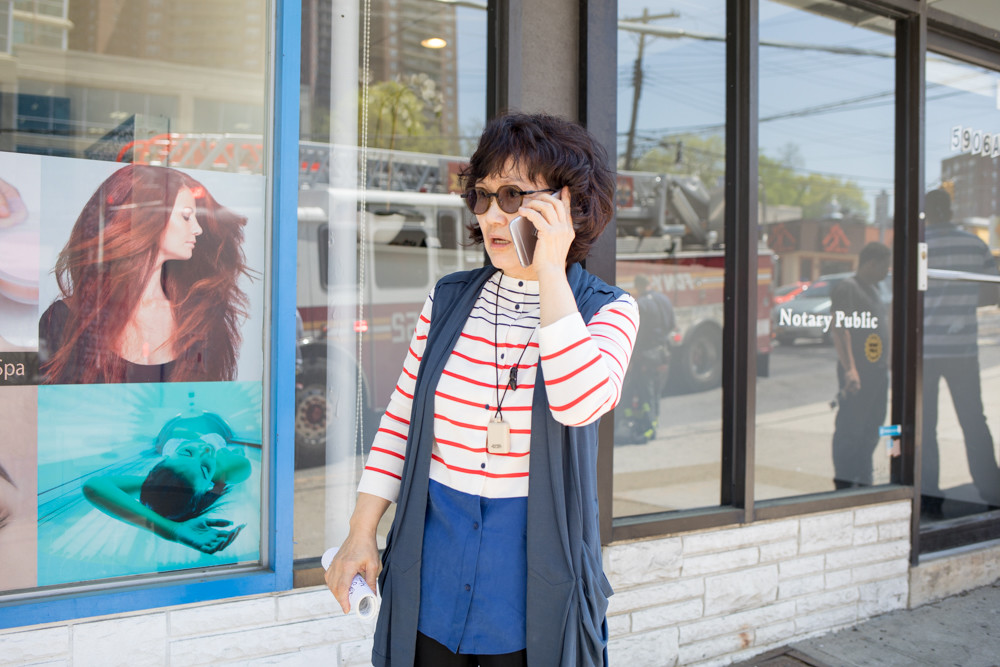 Claire Kim, an instructor who runs the Kumon Math and Reading Center's North Riverdale franchise, talks on the phone after a car crashed into the center, last Wednesday, May 9, narrowly missing Kim as she checked the mail. ‘I was so surprised,’ Kim said. ‘I was scared.’
JULIUS CONSTANTINE MOTAL 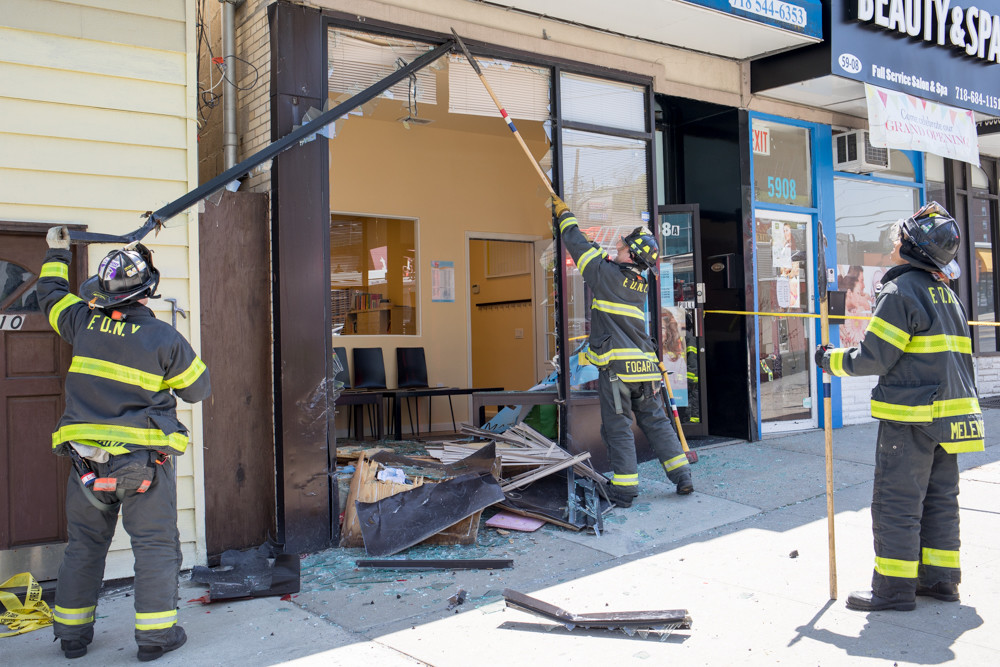 Firefighters clear debris from where a car rammed into the Kumon Math and Reading Center's North Riverdale location around lunchtime May 9. Instructor Claire Kim, who runs the center, said she canceled a class for safety the day after the collision, but held a makeup session the following Saturday.
JULIUS CONSTANTINE MOTAL
Previous Next
By ZAK KOSTRO

Jagged shards of glass were scattered across the sidewalk, crunching under the boots of police officers and firefighters.

The scene was the new Kumon Math and Reading Center at 5908A Riverdale Ave., just north of West 259th Street, around lunchtime May 9, the storefront’s windows shattered.

There were no reported injuries, police from the 50th Precinct said.

The rear end of the 82-year-old man’s charcoal gray Subaru was badly damaged, shedding large segments like long-stewed meat falling off the bone. The driver — who police have yet to identify — wore a button-down shirt and glasses. He sat in the car, door open and seemingly stunned with firefighters and paramedics hovering around him.

“How you feeling?” one asked. The guy blinked but didn’t immediately respond.

The driver reportedly was headed toward the Sunoco gas station up the street when someone asked him to back up, according to police. But the man mixed up the pedals, thinking he had is foot on the break. He accelerated in reverse, ramming straight into the learning center.

The official police account differs a bit from that given by a police officer and firefighter on the scene last Wednesday, who said the driver thought he had the car in drive, but when he put his foot on the accelerator, drove backward into the learning center.

A blue awning with white letters reading “Sky View Pediatrics” still hangs above the Kumon center’s front door, because Claire Kim — a certified instructor with the company who runs the North Riverdale franchise — just opened the location a month ago.

Yet on the day of the collision, Kim probably was thinking less about awnings and more about what could have been a life-or-death experience. She’d stepped outside to check the mail just as the Subaru plowed into the storefront, barely missing her.

Michael Ibbott also was at the wrong place at the wrong time. The Florida-based national education director for the Nelly De Vuyst skin care brand said he was visiting the nearby Agnes’ Beauty and Spa to teach spa employees about the company’s products when the Subaru slammed into the building.

“I heard the thud,” Ibbott said.

“It felt like somebody with a very large bottom just fell on the floor. Scary, though. Luckily, nobody was really injured.”

Paramedics helped the driver amble over to an ambulance. Firefighters, meanwhile, removed remaining shards of broken glass from in front of the storefront, hacking away at the metal structure that once held it in place.

Outside the ambulance, a stout police officer with close-cropped hair wearing reflective biker shades tore big chunks of broken bumper from the back of the car.

Firefighters cordoned off the broken glass-covered patch of concrete in front of the store with yellow tape.

A police officer drove the damaged car down the block, where one of the rear lights blinked continuously. The other was completely smashed.

Kim’s husband, Sung Kim, said he was driving west on 259th Street passing the Riverdale Steak House, transporting boxes of candy, pencils and other supplies to the learning center, when he turned right onto Riverdale Avenue and came upon the ghastly scene.

“I was amazed,” Sung said. “My wife was standing by the door. She’s very lucky.”

“I think it will cost a lot of money,” he said. “But insurance will take care of the damage.”

By the following Monday, however, the front window had been boarded up. Inside the waiting room, the front area smelled of freshly cut timber. Kim didn’t appear perturbed, pointing out one of the windowpanes had already been replaced.

Besides, she had students to teach.

Kim currently has more than 40 students enrolled at the center, some of them walk-ins. It was business as usual Monday, with Kim rushing around preparing for her first arrivals at 3 p.m. Sung was hunched over a desk toward the back of the room, helping out on a day they could’ve used more assistants.

She had to cancel a class the day after the crash, but held a make-up session Saturday.

Kim also temporarily closed the waiting room following the accident, but Monday it appeared inviting enough, with chairs set up, a plant sitting in the corner.

“It’s OK,” she said. “It’s a small thing. The window was broken, and that’s basically it.”