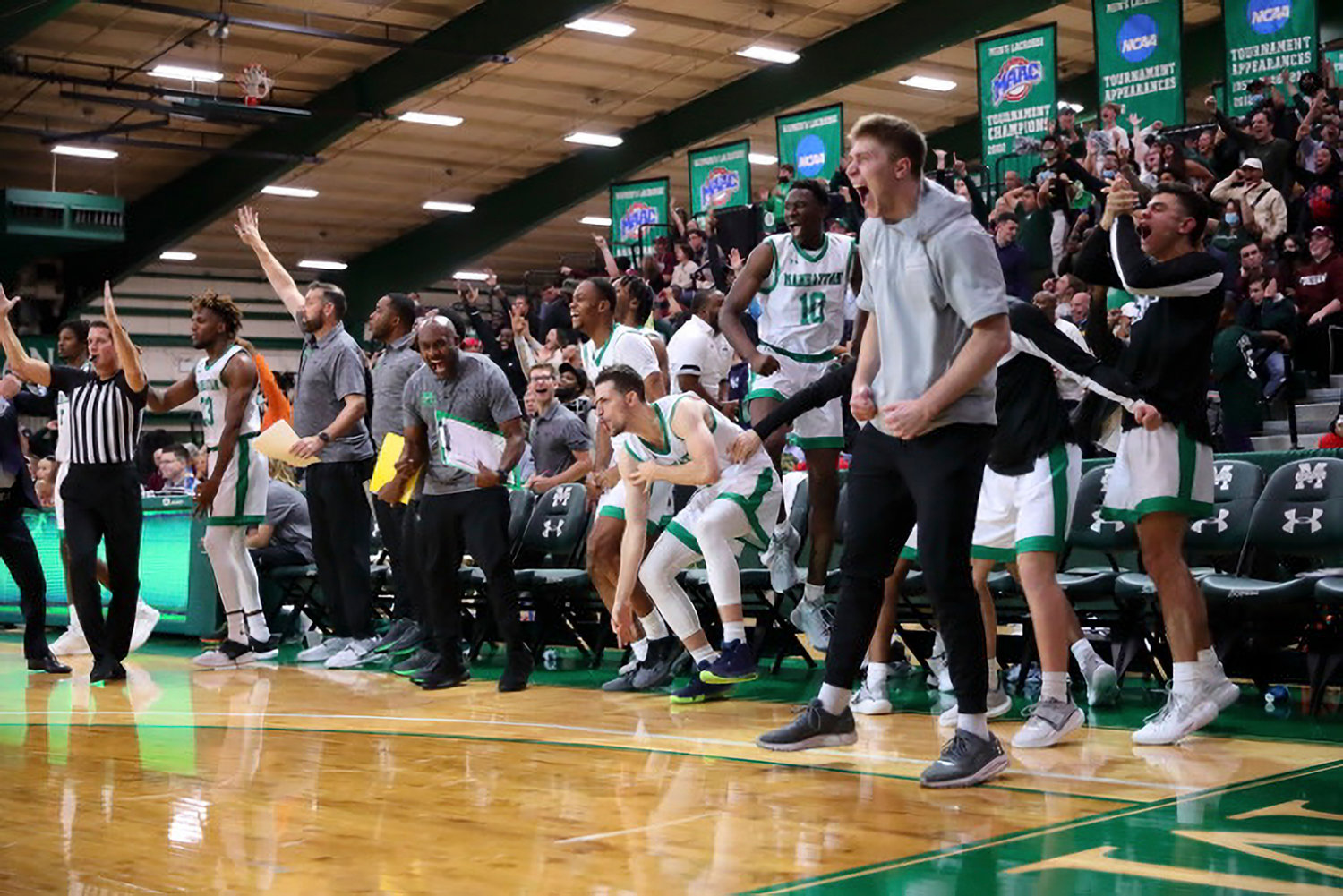 Jaspers men’s basketball team celebrates winning the 2021 Battle of the Bronx rivalry game against Fordham. This year the game will be played because Fordham had no room on its schedule.
GoJaspers.com
By Caroline McCarthy

The longtime basketball rivalry between Manhattan College and Fordham men’s basketball is taking a timeout this season due to what the Rams call “scheduling” issues.

The Jaspers’ and Rams’ athletic departments released a joint statement on Sept. 12 announcing the schools will not participate in what would have been the 109th installment of the rivalry game this season.

The Battle of the Bronx originated in the 1911-12 NCAA basketball season when the Jaspers beat the Rams by one point during the Jaspers’ 12-6  season.

Their 20-19 win that year sparked a century-long rivalry that has only paused twice before in its history; once for WWII and once for COVID.

Since its start, the game has become a major event for the Bronx schools.

Stands are usually filled to the top, T-shirt cannons are shot off and tensions run high. It is one of the few times in a season that the small MAAC Manhattan College sees such energy in Draddy Gymnasium.

“While we are disappointed that we will not be playing the long-standing series this year, we are looking forward to both programs resuming competition next year and in the future,” said Fordhamn’s Ed Kull and Manhattan’s Marianne Reilly, athletic directors for their respective schools.

The location of the game alternates annually. Last year, the Jaspers had an exciting 66-60 win on their home court at Draddy, with their only lead over the Rams came in the final 34 seconds of the game.

The statement then announced that Manhattan and Fordham will enter into a long-term contract after this year to ensure the tradition continues. This caused speculation from fans as it suggested both teams were not willingly participating in the tradition.

According to Reilly, it was Fordham who called off the Battle of the Bronx this year. Being it was their year to host the Battle of the Bronx, Fordham’s staff was responsible for finding a suitable date to play. The Rams are scheduled to have 20 of their 31 games at Rose Hill this season, with no availability to add Manhattan to their schedule.

“From our perspective, if you’ve got that many home games and you’ve got game guarantees, and we don’t know for sure, but we’re speculating, you can move those games around if you really want to,” Reilly told the Quadrangle, Manhattan College’s student newspaper.

The Jaspers did not meet The Patriot League’s Rams in the 2020 season due to COVID-19, but had a steady collection of victories the past five years.