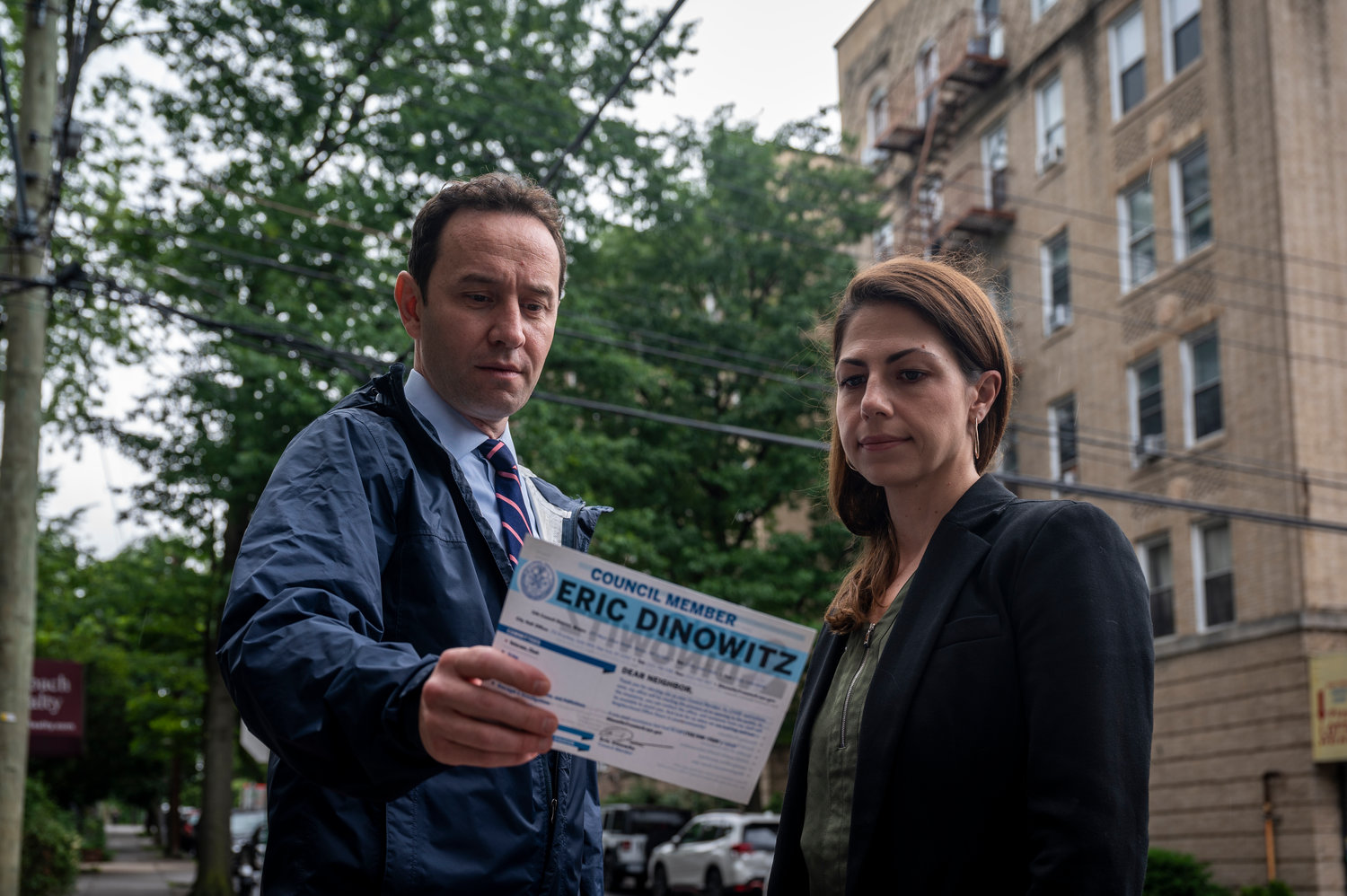 Dan Padernacht and Abigail Martin, both candidates seeking the Democratic nomination for the local city council seat, said they were surprised — and appalled — to see Councilman Eric Dinowitz use taxpayer money to send out what they say looks a lot like a political mailer. Such correspondence is technically illegal under city election law, but lawmakers have gutted that provision over the year, essentially allowing Dinowitz free reign to use his office this way.
HIRAM ALEJANDRO DURÃN 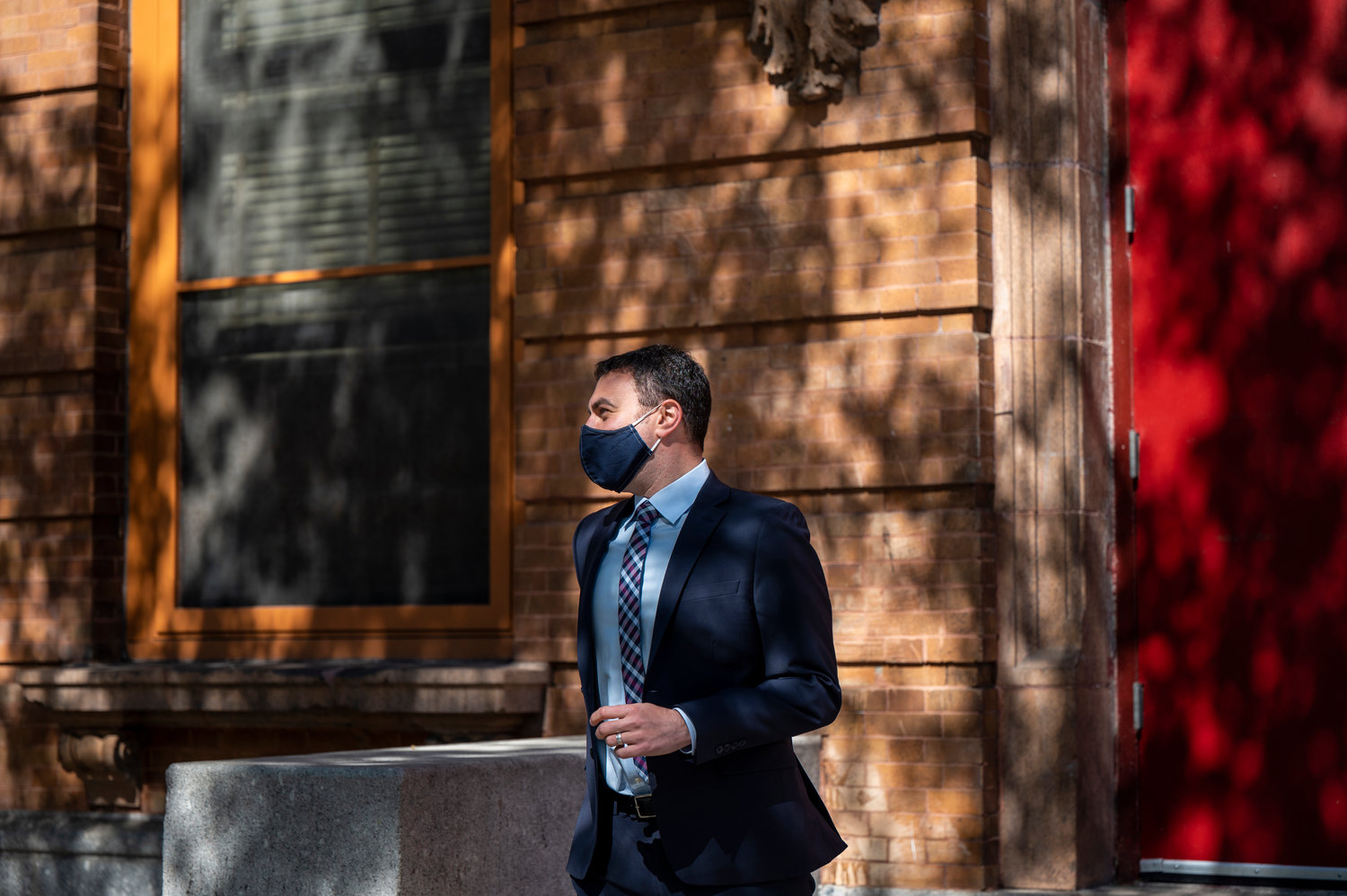 Councilman Eric Dinowitz is taking some new fire from some of his challengers after he used his office to send out a mass mailing with his name and photo emblazoned on it. Such correspondence so close to an election is technically illegal under city law, but the campaign finance board said it approved the mailing.
HIRAM ALEJANDRO DURÃN/ File
Previous Next

Are you campaigning? Are you here as a councilman? It’s a blurry line.”
ABIGAIL MARTIN
By MICHAEL HINMAN

On a morning when temperatures were a bit unseasonably cool, many visited their mailbox and likely found it crammed with election material from races ranging from city council to city comptroller to mayor.

It makes sense. Friday was the start of early voting in New York City, leading up to Tuesday’s primary election. If this isn’t the time to get bombarded with campaign literature, then when?

But many may have noticed one postcard that wasn’t exactly like the others. It had “ERIC DINOWITZ” in huge bold letters, dominating both sides, and even included an equally large picture of the councilman. But this wasn’t a card asking voters to cast their ballot in Dinowitz’s favor at the polls — this was a mailing directly from his council office, sharing the fact he’s here, and he’s ready to serve.

Any other time, such correspondence might be welcome to many. But here? Just a couple weeks before voters would decide if he’ll keep that seat past December? Dinowitz abused his office, at least two of his primary challengers claim, and he charged taxpayers to do it.

“There’s no doubt in my mind that this was meant to campaign,” said Dan Padernacht, who has been running for this city council seat slightly longer than Dinowitz, dating back to 2018. “Races like this are all about name recognition. And if somebody sees your name a certain amount of time, then they are more likely going to choose you when they go to vote.”

Dinowitz already has significant name recognition in his council district, primarily because of his father, longtime Assemblyman Jeffrey Dinowitz. Adding the mailer can only help, not hurt.

But there is one small problem with what the councilman did over the weekend. At least according to city elections law, Dinowitz is not supposed to use any taxpayer money this close to an election that could essentially be construed as campaign material. Even if he’s not openly campaigning in the material.

The law bans any sitting councilman or elected official to distribute mass literature within 90 days of an election they are competing in. Dinowitz sent out his mailer just 12 days before polls close — and right at the very beginning of early voting.

When first reached about this on Monday, a spokesperson for the city’s campaign finance board said they could not comment on specific incidents, or whether a complaint has been filed or not. However, they did say that the city’s “campaign finance program encourages candidates to run for city office on the basis of small contributions. And one of the things they agree to is to abide by a spending limit.

“In terms of the principles behind this part of the law, it’s to make sure all candidates are on equal footing when it comes to spending money.”

Violating the “blackout” as it’s called could be punishable by fines of up to $10,000 for each violation, or even criminal misdemeanor charges. Yet, Dinowitz isn’t expected to face any of that because the campaign finance board seemingly reversed its position a short time later, saying the mailing was within the law and had even received approval from the campaign finance board itself.

Lorenzo Manzano, a spokesman for Dinowitz’s council office, confirmed that approval saying it was granted because it was “ordinary correspondence” between the councilman and his constituents.

“We had this ready to go for a while, but before we did anything else, we awaited approval from CFB and got it,” Manzano said.

Dinowitz himself did not respond directly to reporter inquiries about this mailing as he was out at the early voting sites campaigning, despite what is typically normal business hours.

And that’s another issue that seems to be overlooked by the campaign finance board, said Abigail Martin, another primary challenger to Dinowitz.

“It’s a really blurry line when you’re doing outdoor office hours and doing outdoor food drives on council hours during the day, and during normal business hours,” Martin said. “Are you campaigning? Are you here as a councilman? It’s a blurry line. And again, I think that’s what happens when one family has too much political power.”

One example Martin pointed out was the candidate forum filmed last weekend at the Saturday farmers market near DeWitt Clinton High School hosted by BronxNet and The Riverdale Press. Dinowitz set up a table at the market as a councilman, but then would walk away from it, put on a campaign button, and switch hats to his role as a candidate — not making it clear whether he was at Clinton as a councilman or as a candidate for his seat.

In fact, a 2007 advisory opinion from the campaign finance board’s legal counsel said even distributing flyers at a table violated the “blackout” laws if you were a sitting councilman. In fact, an advisory opinion from the year before defined the intent of the “blackout” law as one that creates a “more level playing field in local elections by limiting an officeholder’s use of public resources for mass mailings in the months preceding an election.”

Yet, the city council has amended this law so many times, it virtually no longer has much teeth. Something Sue Ellen Dodell, formerly general counsel to the campaign finance board, could agree with.

“Although the (Dinowitz) mailer appears to fit within an exception in the charter for ‘ordinary communications’ with constituents, it provides an unfair advantage for Councilman Dinowitz to use taxpayer funds for such purposes.”

Padernacht, on the other hand, doesn’t accept how the campaign finance board is interpreting the law. For him, if this law isn’t meant to block the kind of mailer Dinowitz sent out that cost taxpayers thousands of dollars, then what would it block?

A spokesman for council Speaker Corey Johnson — who has endorsed Dinowitz for his seat — said primarily newsletters and such that highlight what the councilman has been doing in the district would not be allowed, but that is a decision ultimately left up to the campaign finance board, and is not decided at the city council level. Dinowitz’s card, on the other hand, simply provided what services the councilman’s office provided and how to reach him. All under his prominently displayed name and picture.

Padernacht hinted this might not end here. In fact, he’s considering challenging the campaign finance board’s interpretation of the law — potentially in front of a judge.

“I think that this is something that is the perfect case to challenge CFB’s determination on a mass communication,” Padernacht said. “You don’t get more egregious than using taxpayer funds to mail out a promotional piece about yourself that arrives the first day of early voting.

“And even if by some far-reaching interpretation, an agency determines that this is indeed legal, it’s definitely not ethical.”