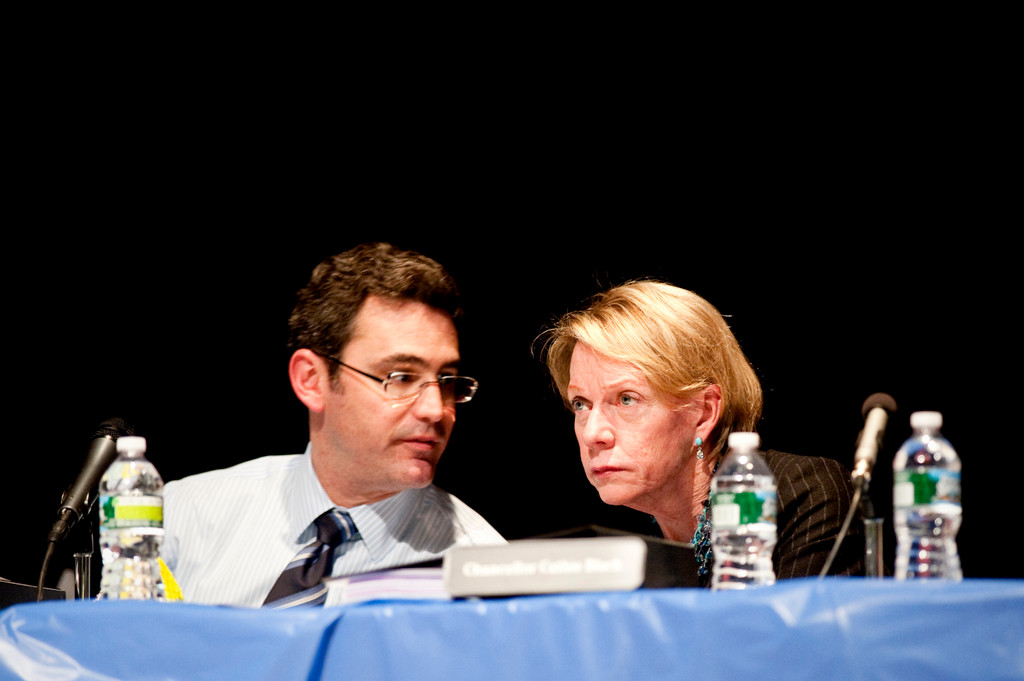 Members of the Panel for Education Policy at the meeting held at Brooklyn Technical High School in Ft. Greene on Jan. 3.
Karsten Moran/THE RIVERDALE PRESS
By Nikki Dowling

Some of the people charged with deciding the fate of John F. Kennedy High School don’t even know where it is.

The 13-member Panel for Educational Policy, which votes on major changes to school utilization, decided in favor of the Department of Education’s proposal to phase-out JFK by 2014.

But most PEP members interviewed the day before, the day of and the Monday after the vote couldn’t answer basic questions about JFK and admitted they hadn’t been given enough information — or done enough research — to make an informed decision.

“The mayor gets what he wants. It’s just as simple as that. He has the numbers,” Brooklyn representative Gbubemi Okotieuro said in a phone interview on Monday. He and other borough representatives — Monica Major (Bronx), Dmytro Fedkowskyj (Queens) and Patrick Sullivan (Manhattan) — voted to keep JFK open. Staten Island representative Joan Correale was absent.

Of the four borough representatives who voted on Friday, only Ms. Major, who was interviewed around 4 p.m. the day before the vote, said she had been to Kennedy. Mr. Sullivan and Mr. Fedkowskyj, who were interviewed the day before the vote at around 3:30 p.m., and Mr. Okotieuro, who was interviewed on Monday, couldn’t say anything specific about JFK and didn’t even know where in the Bronx it is located. Only Mr. Sullivan recognized the name Anthony Rotunno, the school’s former principal who made headlines across the City when he was charged with allowing the theft of student-raised funds.

The Press also contacted two of the mayor-appointed PEP members by phone the day of the vote. Linda Lausell Bryant refused to answer questions when she was told they would pertain specifically to Kennedy. When asked, Ms. Bryant said she knew where Kennedy is located but would not name the place. Philip A. Berry also refused to answer questions and quickly hung up the phone.