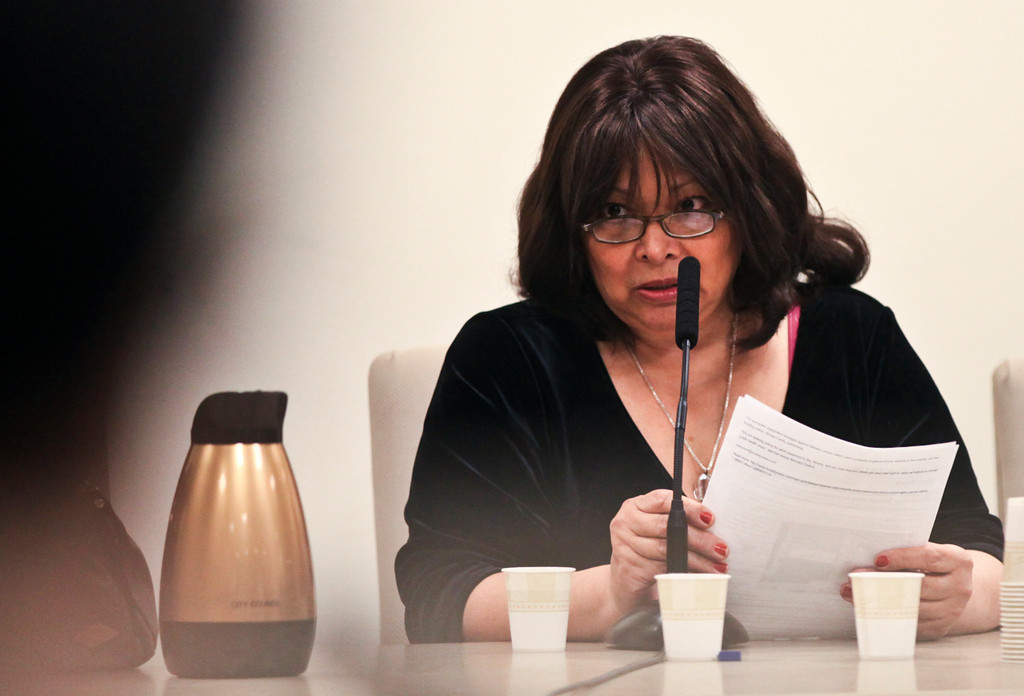 Adaline Higgins, a parent of former PS 51 students, gives testimony to the City Council on Dec.15 about the adverse affect the toxins in the school had on her children during a family engagement hearing.
RIVERDALE PRESS / BYRON SMITH
By Nikki Dowling

Only two were allowed to speak, taking the stand just 10 minutes before the meeting was set to adjourn.

“You’ve asked me to assess ‘How is the NYC DOE doing in terms of Parent Engagement?’” reads former parent Kelly King Lewis’ testimony, which she did not get to say aloud. “The New York City Department of Education gets an ‘F’ in Parent Engagement when it comes to building contamination of PS 51-Bronx New School.”

Adaline Walker-Santiago cried as she spoke.

“This is the scariest thing you could be telling me,” she testified, referring to the contamination. She added that, although mostly silent, her children, now in their 20s, have asked her, “‘Does this mean I’m gonna die soon?’”

Three of Ms. Walker-Santiago’s children attended the Bronx New School, PS 51. When 18 years later they learned that the place where they learned to read and write had once been a light-making factory and contained a carcinogen, she said they shut down and refused to discuss it.

They have that in common with Schools Chancellor Dennis Walcott, who has not yet met with former and current parents as he promised in August. And with DOE officials, who have not met requests to create a medical registry to track former and current students and staffers.

Department of Education officials confirmed in February that levels of TCE exceeding state guidelines were present in the school’s former location, at 3200 Jerome Ave., particularly in the air of the cafeteria and basement. But the DOE did not alert the PS 51 community until August, making it too late to test for the chemical, which leaves the system in a matter of weeks. The school was moved to 695 E. 182nd St. in time for the start of the new school year.

When Mr. Walcott met with parents on Aug. 18 at the Bronx High School of Science, he promised to make a master list so former and current parents would be kept abreast of PS 51 developments and to hold additional meetings going forward. As of Dec. 15, Ms. Walker-Santiago said she had not received a single mailing about the contamination.

On Sept. 28, the Northwest Bronx Community and Clergy Coalition and PS 51 families submitted a formal request to Mr. Walcott, asking him for a meeting.

NWBCCC organizer Allison Manuel said on Oct. 7, Jesse Mojica, executive director of the Division of Family and Community Engagement, called her to say the chancellor would not be meeting with families, as he had fulfilled his obligation.

Less than a week later, current and former PS 51 families held a press conference at the Bronx High School of Business, requesting yet again that the chancellor meet with families.

At that meeting, Mr. Walcott said, “I have not turned down any request to meet with parents,” and said he would schedule a meeting within two weeks.

And he did — but he only sat down with members of the Parents’ Association.

“Clearly, the meeting the Chancellor arraigned was NOT with the parent body (composed of both current and former parents) that had made the original meeting request,” Ms. Manuel wrote in an e-mail. “This meeting took place without informing or inviting any former PS 51 parents.”

Ms. Manuel says that a subsequent e-mail request to the chancellor went unanswered.

But the DOE may soon be forced to reckon with the contamination.

Rhonda Rivera, 50, who has worked as a teacher’s aide at the Bronx New School, PS 51 since 1993, filed a lawsuit on Dec. 9, claiming that working at the toxic site gave her cancer. The DOE is not named in that lawsuit. And Ms. Walker-Santiago said she is planning to contact the New York Lawyers for the Public Interest to discuss legal recourse.