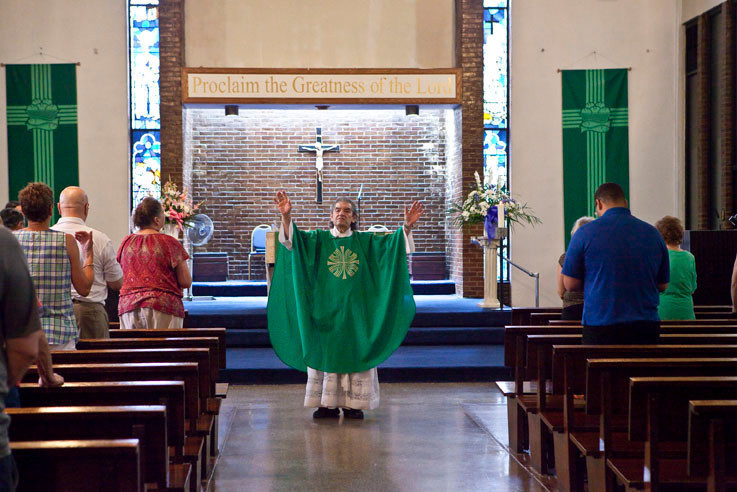 Father James Villa concludes a mass at the Church of the Visitation of the Blessed Virgin Mary in August 2012.
Marisol Díaz/The Riverdale Press
By Maya Rajamani

Parishioners at two local churches are fighting the Roman Catholic Archdiocese of New York’s recommendations to close one church and reduce the number of Mass times at another.

The Archdiocese has recommended Church of the Visitation on Van Cortlandt Park South for closure. St. Gabriel’s Church on Arlington Avenue, meanwhile, would have to eliminate its weekday masses.

“We were all devastated,” said Visitation bookkeeper Jennifer Hudson, who has been a parishioner at the church since 1993.

Both parishes have until Sunday, June 8 to send a response back to the Archdiocese, which is carrying out restructuring efforts through its “Making All Things New” initiative. Reverend Monsignor Robert Larkin, the pastor at Visitation, said the Archdiocese will make its final decisions in September, after a board of 40 members reviews the responses.

In addition to the formal responses, parishioners at both churches have begun letter-writing campaigns asking the Archdiocese to reconsider its recommendations.

“We want to make sure that they know we don’t agree with their recommendation,” said Rev. Larkin, who has been Visitation’s pastor for the past 23 years. Along with the campaigns at both churches, Visitation has circulated petitions calling for the Archdiocese to reconsider its preliminary decision during the review process.

Ms. Hudson said the response to the call for letter-writing has been overwhelmingly positive.

“Just from speaking to people, the activity that is being generated is astounding,” she said.

While both parishes have parochial schools affiliated with them, the schools’ statuses will not be affected by Archdiocese decisions regarding the two churches.

In 2007, the Archdiocese closed 21 parishes around the city, in spite of parishioner protests. In recent years, the Archdiocese has struggled with financial difficulties, a dwindling number of new priests and low attendance at some of its parishes.