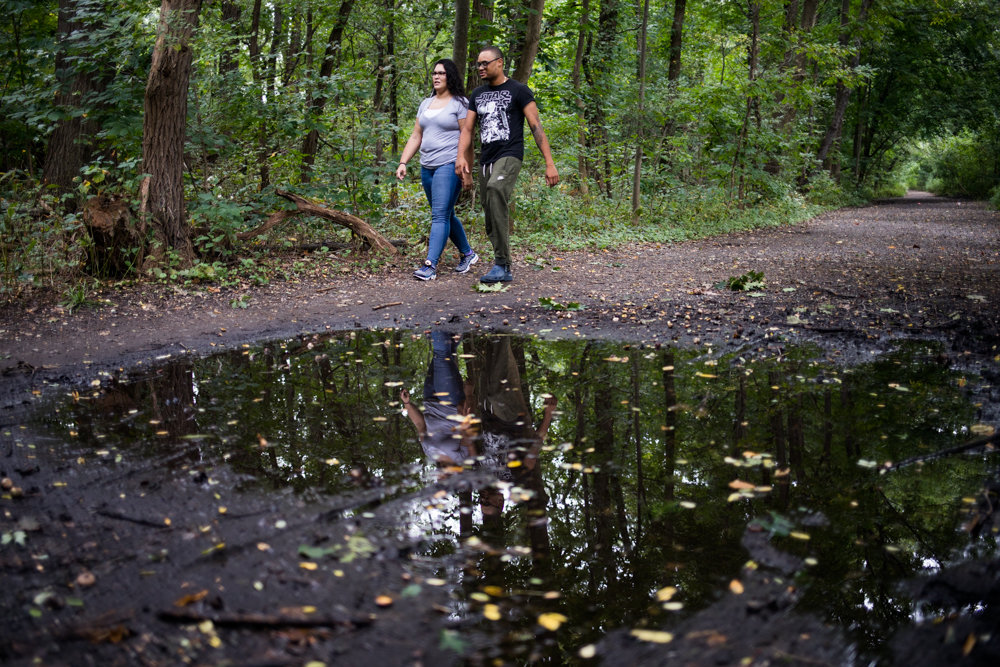 Toni Seguinot and Adam Woodley walk alongside a puddle on the Old Putnam Trail in Van Cortlandt Park. A plan is in place — and funding secured — to pave a portion of the trail extending from the northern region of the park to the bottom of Van Cortlandt Lake. But both Seguinot and Woodley, who walk the trail at least once a week, feel it would diminish the park’s natural beauty.
JULIUS CONSTANTINE MOTAL 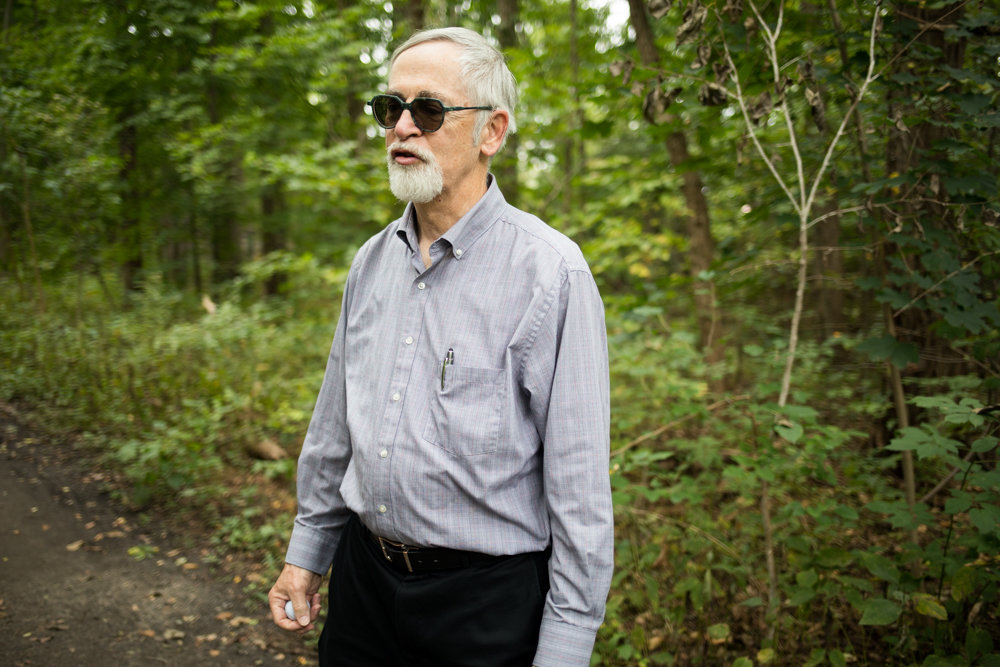 Manhattan College professor William Merriman has trotted along the Old Putnam Trail in Van Cortlandt Park three times a week for 30 years. He opposes a plan to pave a large section of the trail, preferring instead a soft surface. ‘I feel like when I’m walking here, I’m in the country.’
JULIUS CONSTANTINE MOTAL 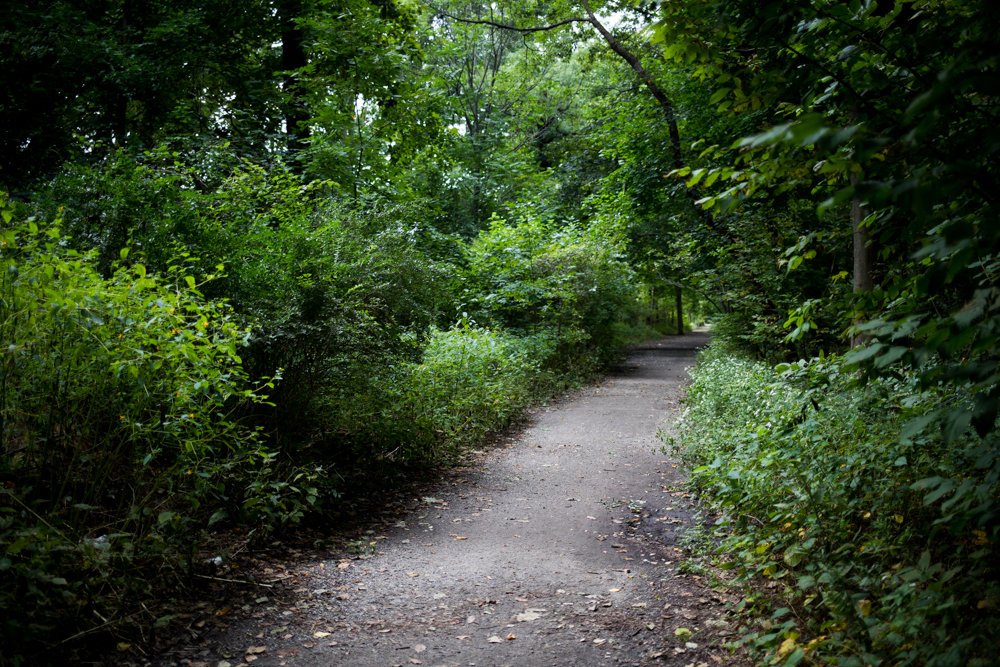 A long strip of the Old Putnam Trail in Van Cortlandt Park could be covered in asphalt in the not-too-distant future if city parks officials have their way. But some residents who frequent the trail fear paving it could threaten its ambiance as a respite from the churn of urban life beyond Vannie’s boundaries.
JULIUS CONSTANTINE MOTAL
Previous Next
By ZAK KOSTRO

It could be a smoother ride for cyclists, but more jarring on joggers’ joints. Yet, that’s not on the mind of city parks department officials who believe their plan to pave more than a mile of the Putnam Trail will make it more accessible to all.

The trail is a vital north-south corridor through Van Cortlandt Park running along the abandoned Putnam Railway. It’s always been more of a dirt and gravel trail, but the addition of a layer of asphalt could happen quite soon, Community Board 8 parks and recreation committee chair Bob Bender said.

“It’s funded. It’s going to happen,” Bender said. “There is a plan in place. There are pages and pages of construction drawings.”

But paving over the trail won’t be easy. That portion of the park is wetland, falling under the jurisdiction of the state’s environmental conservation department. What that means, Bender said, are piles and piles of restrictions work crews will have to follow.

The idea of paving the trail was first proposed in 2013, but failed under scrutiny of some residents and community leaders. The city’s parks department finally developed a plan Bender’s committee, at least, liked, who voted to approve paving in 2016.

Among the main paving goals expressed at the time were to make the trail compliant with the Americans with Disabilities Act, providing universal access to the greenway for all visitors. The plan has changed since past iterations, but it’s also generated what former CB8 chair Robert Fanuzzi called “the longest-running debate and conflict in our area.”

“At times it was spectacular,” Fanuzzi said. “Scenes of hundreds of people, demonstrations, disruptive community board meetings. I never saw an issue that so passionately divided our community. It was very hard-fought.”

Still, despite its polemical history, it appears to be moving forward.

Grace Industries will manage the project, said Chris Syrett, director of green infrastructure and design for the parks department.

“We feel that they’re a good contractor for this job because they’re skilled, they’re large, they have the capacity — which you don’t always get with low-bid contractors,” Syrett said at the September parks and recreation committee meeting.

The plan is to pave the trail from the park’s northern reaches down to the southern end of Van Cortlandt Lake, Syrett said — not quite the entire length, partly because of an existing bike path at the lake’s southern end allowing cyclists to segue from there to the Putnam greenway.

Unpaved, the trail is anywhere from eight to 10 feet wide, Syrett said, and would remain that width once paved, with a two-foot planted strip on each side seeded with woodland native species — a mix of grasses and wild flowers.

The construction budget for the project is $2.7 million, a combination of city dollars and state transportation department funding, Syrett said. It would take about a year to complete, requiring asphalt to be laid between April and November and plantings to take place in spring or fall.

Even with construction set to begin any day now, there are still some critics who caution against the risk of it compromising what they see as a rare escape from urban overload just beyond Vannie’s borders. Tibbett’s Wetlands, which the trail runs through, is the largest remaining freshwater wetland in the Bronx, said Christina Taylor, executive director of Friends of Van Cortlandt Park.

But Syrett says the parks department is working closely with the contractor to keep those concerns from becoming an actual problem.

“We’re sensitive to the fact that it’s adjacent to some wetlands and that it travels through a sensitive area,” Syrett said. “We have our in-house ecologist and forestry restoration specialist who will be monitoring the work very closely to ensure that the work is done sensitively, and avoid any disruption to the wetlands and to breeding bird areas.”

But Syrett had some bad news: The trail probably will be closed during construction.

Still, even with these avowed precautions, some residents remain skeptical. William Merriman has jogged the trail around three times a week for 30 years.

“I prefer to have the soft surface,” said Merriman, a professor at Manhattan College’s School of Education and Health.

“Besides that, I feel like when I’m walking here, I’m in the country. And I wouldn’t want to have a sidewalk-type thing here. I feel like I’m getting away from everything.”

Suzanne Corber, who’s lived in Riverdale nearly two decades, opposes paving, fearing it could threaten what she describes as “a rare experience” for urbanites.

“To many people, it’s almost a spiritual experience going through that area of the park and using that trail,” Corber said. “It has a historical resonance to it, and the feeling of it is really unmatched to other areas in the park, or other parks.”

But it appears as though she and Merriman could soon find themselves pounding a different surface. While Bender views paving as a last resort, he’s past fighting for alternative options like a rock-dust surface, which can be ADA-accessible, but “would never happen.”