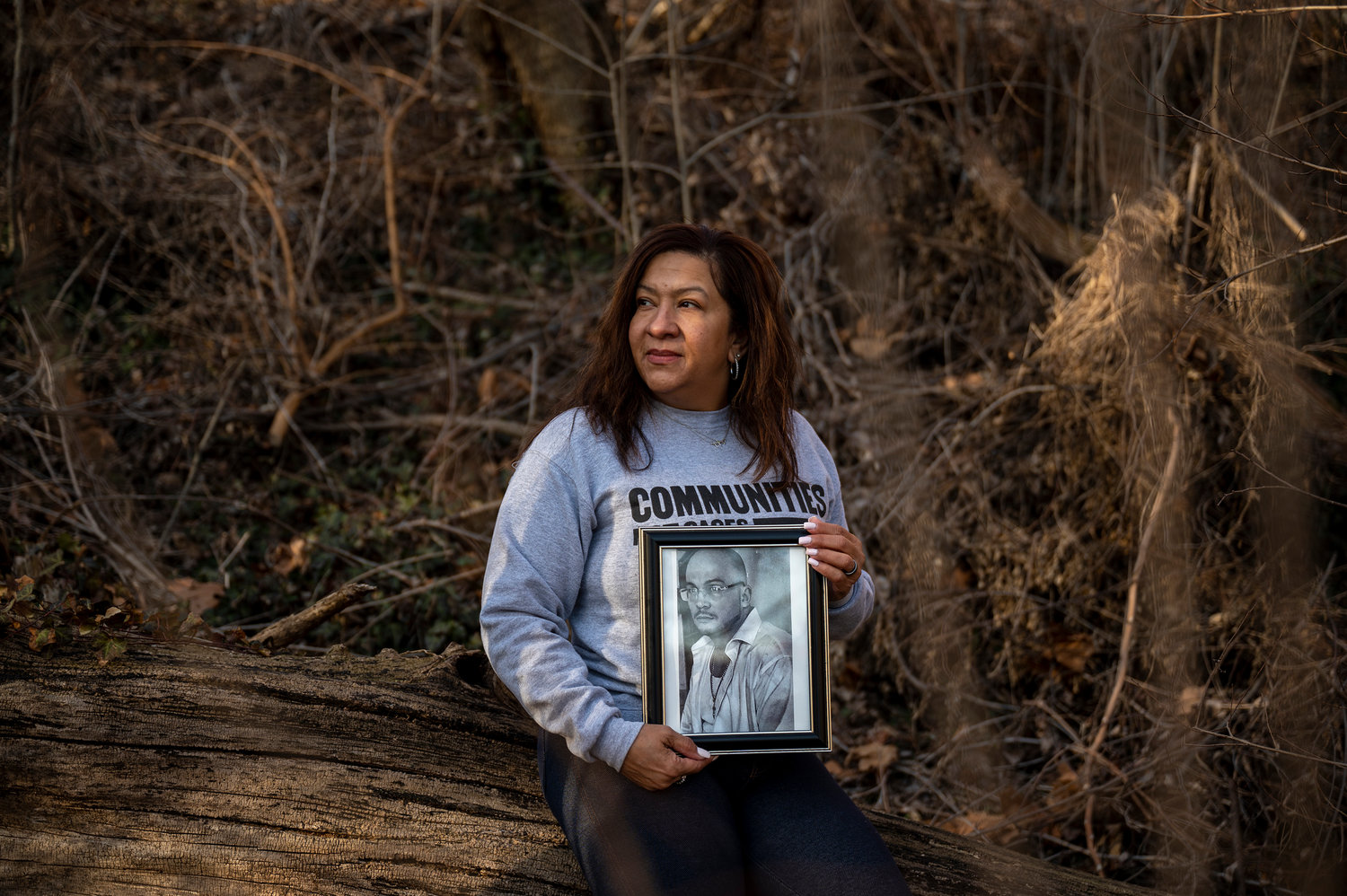 Jeannie Colon holds a picture of her husband, Jose, who has spent the last two decades behind bars. Jose is one of thousands of prisoners who could see a better chance of being released from prison if a pair of bills aimed at reforming the state’s parole system was signed into law. But not all lawmakers — like Assemblyman Jeffrey Dinowitz — are convinced.
Hiram Alejandro Durán

It's just saying that when someone goes before the parole board, they will be judged holistically for who they are today.”
TeAna Taylor
By SACHI McCLENDON

Jose Colon was just 17 years old when he was charged with murder. By the time he was 19, a judge sent Jose to prison for at least the next 30 years, if not the rest of his life.

Now 40, the teenager Jose once was is a faded memory, according to wife Jeannie. But he’s done anything but rot.

Jose is now a certified paralegal. He’s completed a number of rehabilitation programs. He survived cancer. And now he’s a clerk in the prison’s education department.

Jose is even working toward a bachelor’s degree. And, of course, he tied the knot with Jeannie.

“He’s done everything that he can possibly do to change himself and try to give back,” his wife said. “The nature of the crime is never going to change, but he as a person can definitely change.”

Jose still has seven years before he’s even eligible for parole. Even when he does get that hearing sometime toward the end of this decade, Jose’s chances of being released from Sing Sing Correctional Facility are grim, given the current laws surrounding parole. If he were to go in front of the board today, “I believe he would be denied parole,” Jeannie said, solemnly.

But there are two bills in front of state lawmakers that could change all of that. The first, known as the Fair and Timely Parole Act, would direct parole board’s to pay less attention to the nature of a particular crime, instead focusing on what a prisoner has done following their incarceration. The second bill would give certain prisoners older than 55 a better chance of not dying behind bars.

They are two bills championed by RAPP — Release Aging People in Prison. And Jeannie Colon knows all about them, working as RAPP’s Bronx community leader.

Yet turning these bills into law might be more difficult than these prisoners achieving parole. Some lawmakers — like Assemblyman Jeffrey Dinowitz — haven’t quite shared the same enthusiasm for these reforms.

In fact, the debate over parole reform has spilled into the pages of The Riverdale Press where supporters of the legislation and Dinowitz have sparred over the merits of the twin bills through a series of Point of View opinion pieces. Jessica Woolford — one of two people looking to unseat the Assemblyman in the upcoming summer primary — backs both bills.

The Fair and Timely Parole Act is intended to restructure how parole is granted, ensuring a board tasked with deciding whether to release a prisoner considers primarily that person’s conduct while incarcerated. In other words, the board could no longer deny parole solely based on the crime. Instead to deny release, the board would have to demonstrate why a prisoner poses an increased risk of breaking the law if they were sent back out into the world.

TeAna Taylor also works for RAPP, motivated to secure her father’s release from prison. She argues this sort of legislation is long overdue.

“It’s just saying that when someone goes before the parole board, they will be judged holistically for who they are today,” Taylor said. That includes “the nature of their crime, including any letters of support or opposition by the victim or any other community members, as well as everything they’ve done since incarcerated to really transform and rehabilitate themselves for the better.”

The second bill — the Elder Parole Act — would grant a hearing before the parole board for those 55 and older, and who have served at least 15 years of their sentence. If release is denied, the board must schedule another hearing within two years, and provide the prisoner a written justification for its decision.

This bill comes after a recent report out of the state comptroller’s office found that the number of prisoners over 50 has grown marginally since 2008 — even as the total prison population has been cut in half. As of March 2021, nearly a quarter of those in prison are older than 50.

Despite those troubling numbers, Assemblyman Dinowitz — while not explicitly against the bills — gave them less than a full-throated endorsement. At least in their current form.

“The fact is that anyone who receives a prison sentence long enough to qualify for elder parole has been convicted of an extremely serious crime,” the lawmaker wrote in a Feb. 24 Point of View. “Many of my colleagues — including myself — have very serious concerns that the elder parole bill does not address the type of crime in any way.”

“If you go up and shoot a cop in the head deliberately, and you’re sentenced to life without parole,” Dinowitz said, “yeah, I would carve that out.”

While Dinowitz won’t say how he’d vote on either of these bills in their current form, he insisted he’s not pushing against them. But that probably wouldn’t matter anyway. At least as far as the Assemblyman is concerned, there simply is not enough support among his colleagues in Albany.

“This is just a political reality,” Dinowitz said. “We don’t typically bring bills to the floor of the Assembly unless we know we have the votes to pass it. I guarantee you, there aren’t enough votes to pass it.”

But that’s where an elected official like Dinowitz should lead the charge — at least as far as Woolford is concerned.

“I know that there is support in the community and that electeds are supposed to go to work for us,” she said. “Once I’m in Albany, I see it as my responsibility to make sure that we’re centering these victims, and the survivors, and also the families of incarcerated elders and folks across the spectrum.”

Yet while politicians consider these bills, Jose Colon sits in Sing Sing, while back in the Bronx, his wife Jeannie contemplates what their life would be like together if he were finally released.

“When he comes home, I’m going to have to share him with the world. And, that’s going to be another hurdle for me, because I have him all to myself right now,” she said with a laugh.