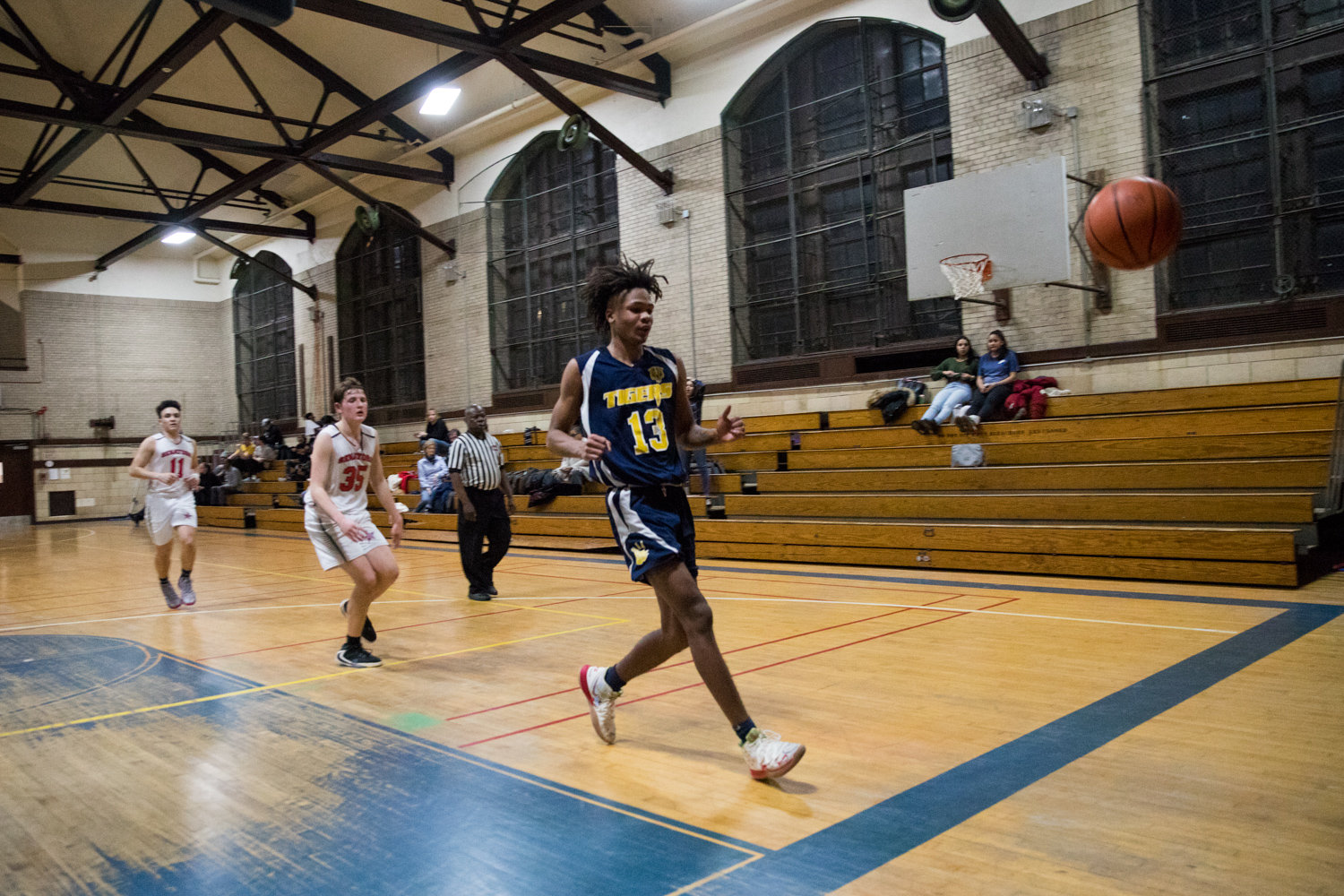 Riverdale/Kingsbridge Academy’s Kai Parris loses the ball out of bounds, but that was about the only thing not going his way as he scored 28 points in a convincing victory over American Studies.
JULIUS CONSTANTINE MOTAL 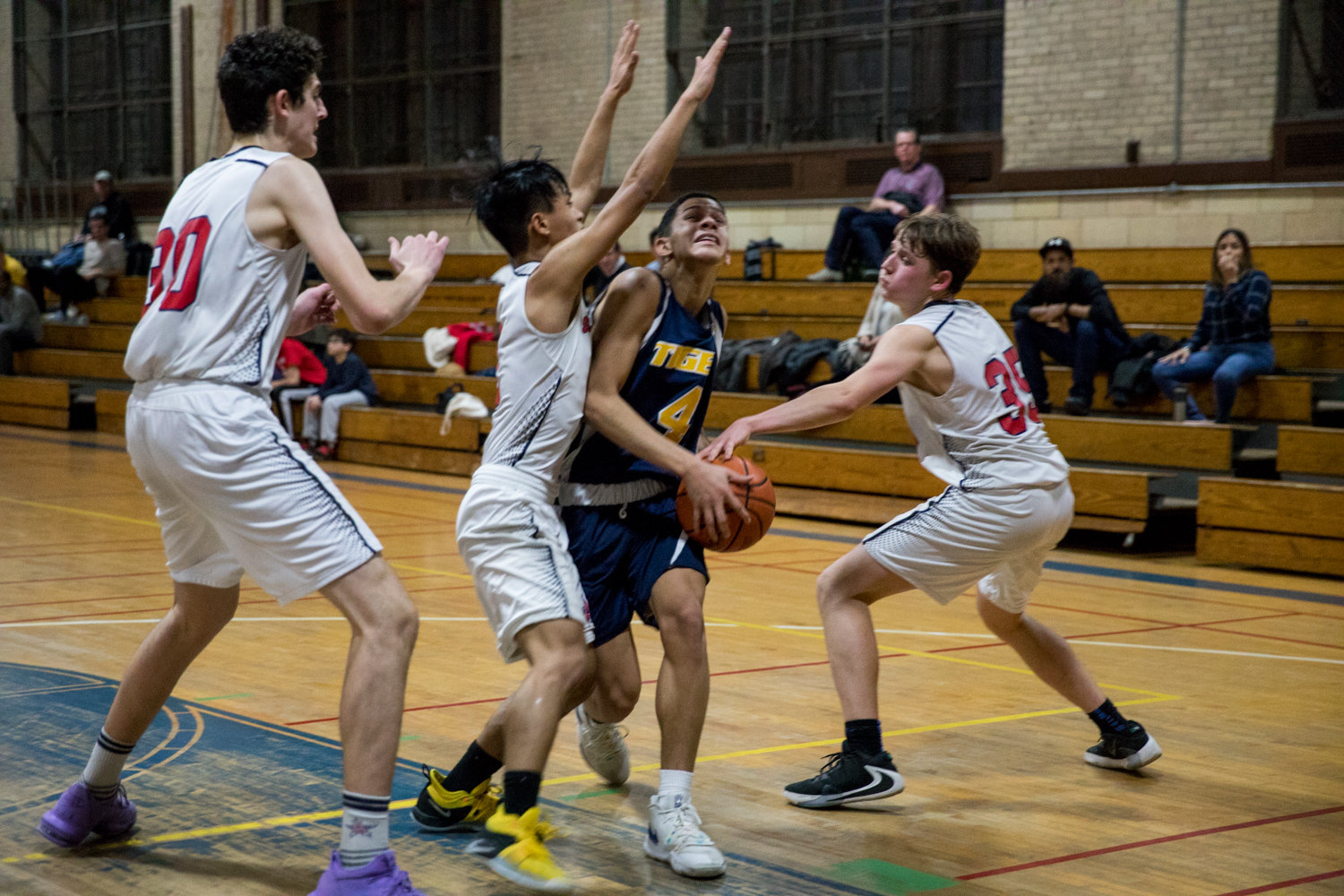 Riverdale/Kingsbridge Academy’s Ethan Bonet slices through a pair of American Studies’ defenders during the Tigers’ 49-38 win over the Senators. Bonet finished with 12 points and 16 rebounds.
JULIUS CONSTANTINE MOTAL
Previous Next
By SEAN BRENNAN

It was a season-saving victory for Riverdale/Kingsbridge Academy — and a season-crushing defeat for American Studies.

Both the Tigers and Senators came into last week’s battle at Lehman College in desperate need of a victory in order to keep their flickering playoff hopes alive. Both teams sat squarely on the postseason bubble with RKA, owning a 5-6 record, having only slightly more wiggle room than American Studies, which entered the game toting a 4-7 mark.

And with the regular season schedule dwindling down to a precious few games — and a .500 or better record needed for a postseason berth — it was a case of now or never for both teams.

But American Studies had no answer for Kai Parris as the Tigers’ senior scored a game-high 28 points, allowing RKA to roll to a 49-38 victory. That evened their record at 6-6, while American Studies dropped to 4-8, mathematically eliminating the Senators from the postseason hunt.

“We felt coming into this game that if we won this one, we’d be in the playoffs,” RKA head coach Cole Benack said. “We’re 6-6 now, so if we win two out of our next three, we’re in the playoffs.”

The Tigers have games against Tuitt, Marie Curie and the Academy for Language & Technology remaining on their schedule — teams they defeated the first time they faced them, routing both Curie and ALT.

RKA led just 22-21 at the half, but opened things up in the third quarter. Parris scored 11 of the Tigers’ first 14 points in the period, with the last of those coming on an emphatic dunk that gave RKA a 36-26 lead. RKA’s advantage ballooned to 47-30 by the middle of the fourth quarter, and American Studies never got closer than 11 points the rest of the way.

“We came into this game thinking of it as a must-win game,” said Parris, who logged a combined 69 points in RKA’s two games against the Senators this season. “It was close at halftime, but we just started pressing them and they turned it over a lot, and we went on a crazy run after that.”

What also came out of the win for RKA was the recognition of senior Ethan Bonet as Parris’ capable sidekick. Bonet finished with 12 points and 16 rebounds in the victory.

“Ethan’s got a great basketball IQ, probably one of the highest on the team,” Benack said. “He’s a great wingman for Kai, and his shot has come a long way. I think of him as the guy at our helm. He directs our offense.”

Bonet loves his role as a player who can fill up a stat sheet in many ways.

“I just want to be that second option when the pressure is on Kai and they double-team him,” Bonet said. “I just step up. I like having the pressure on me, because if it becomes hard on him, then it’s up to me.”

It’s not new news that Bonet is his right-hand man, Parris said.

“Ethan has always been my wingman,” Parris said. “We play well together. He knows what I do, he knows how to get me the ball in my spots. He knows what he’s doing out there. He can rebound, dribble, pass, shoot the ball, and get to the basket. He can do everything.”

And that duo just proved to be too much for American Studies to handle as they will now play out the remainder of their schedule with nothing left to battle for but pride.

“It’s frustrating because there was so much promise to this season,” Senators’ head coach Michael Hamlett said. “We had some injuries this year, and there was a stretch of games where we lost several games by four (points). One rebound, one possession, if some had gone our way…”

Senators’ senior Troy McLean sat slumped in the bleachers after the game, his head bowed, left to think of what might have been. His basketball career now essentially over with only a few meaningless games left to be played.

“We just lost our confidence and we couldn’t get it back in time.”