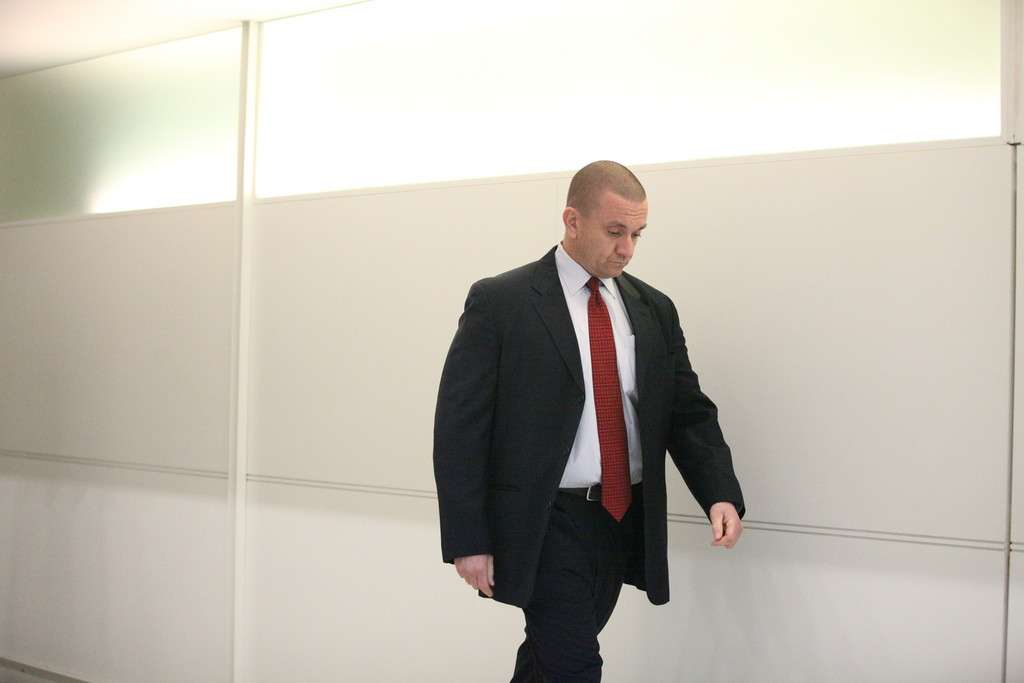 Detective Kevin Spellman arrives for the start of his trial at Bronx Criminal Court on November 21, 2011.
Byron Smith
By Graham Kates

Supporters of a former detective accused of killing a Kingsbridge woman in a drunk driving crash lined up at the entrance to a catering room at Rory Dolan’s restaurant and bar on Jan. 7, waiting their turns to deposit contributions in a large white box.

The so-called 10-13 party — named for the dispatcher radio code signaling that a police officer needs assistance — was for Kevin Spellman, who is charged with vehicular homicide in the 2009 death of 66-year-old Drane Nikac.

On the morning of the incident, Mr. Spellman was driving his government-issued Chevy sedan on his way home from a night of drinking when he struck Ms. Nikac, according to police.

The 10-13 event came less than a month after Mr. Spellman’s former attorney, Robert Brunetti, asked to be removed from the case. Mr. Spellman replaced Mr. Brunetti with Peter Brill, a Long Island-based attorney with expertise in drunk driving cases, who is also employed by the Detectives Endowment Association.

When asked about the party, Rosemarie Arnold, an attorney representing the family of Ms. Nikac in a civil suit against the city, said the family was aware of it and finds it “disgraceful.”

“One would think that a police officer would be embarrassed to participate in such a fund raiser, because … you would think that he would be an embarrassment to his fellow officers and the police force as a whole,” Ms. Arnold said.

The 10-13 fund raisers are typically reserved for police injured in the line of duty or for cops whose families are struggling with medical bills.

SideGig.com, a police services and fund raisers clearinghouse, lists upcoming 10-13s in New York, which include a party for a recently retired cop suffering from a Sept. 11-related sickness; a benefit concert for the family of Peter Figoski, who was killed while responding to a Brooklyn burglary in December; and a fund raiser for the cancer-stricken 5-year-old son of two NYPD retirees.

“We had that happen once at my precinct [in Queens], where a guy got in trouble for drunk driving. A delegate brought up doing a 10-13 and people were like ‘no way, get out of here with that stuff,’” a police source said.