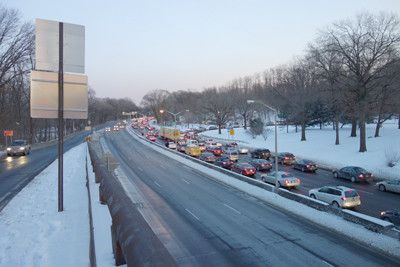 A pedestrian was killed late Thursday night on the Major Deegan Expressway, the first pedestrian to be killed on the thruway since early 2017.
File photo

The Bronx stretch of the Major Deegan Expressway has recorded its first pedestrian fatality in more than two years after a man apparently tried to cross the busy thruway Thursday night.

Police said the man — who was not identified pending family notification — was trying to cross the southbound lanes of the Major Deegan just before midnight on Thursday when he was hit by what witnesses described as a "dark-colored vehicle." The car drove off, leaving the man lying on the road, onyl to be almost immediately hit by a second vehicle — a 2010 Mazda sedan — which stopped at the scene.

The man was pronounced dead at the scene. There are no arrests, according to the New York Police Department, and officers are still investigating.

Two pedestrians were killed in separate incidents on the Major Deegan back in Spring 2017, beginning with the death of Victoria Hamann, 28, of the South Bronx in February 2017. She had been walking south along the West 230th Street exit when a car swerved to miss her, but was unsuccessful.

A month later, a 49-year-old woman was killed after she reportedly walked in the middle lane on the southbound side of the expressway in the early-morning hours.

Nearly 200 pedestrians were killed in New York City last year, according to officials, with Queens the deadliest.