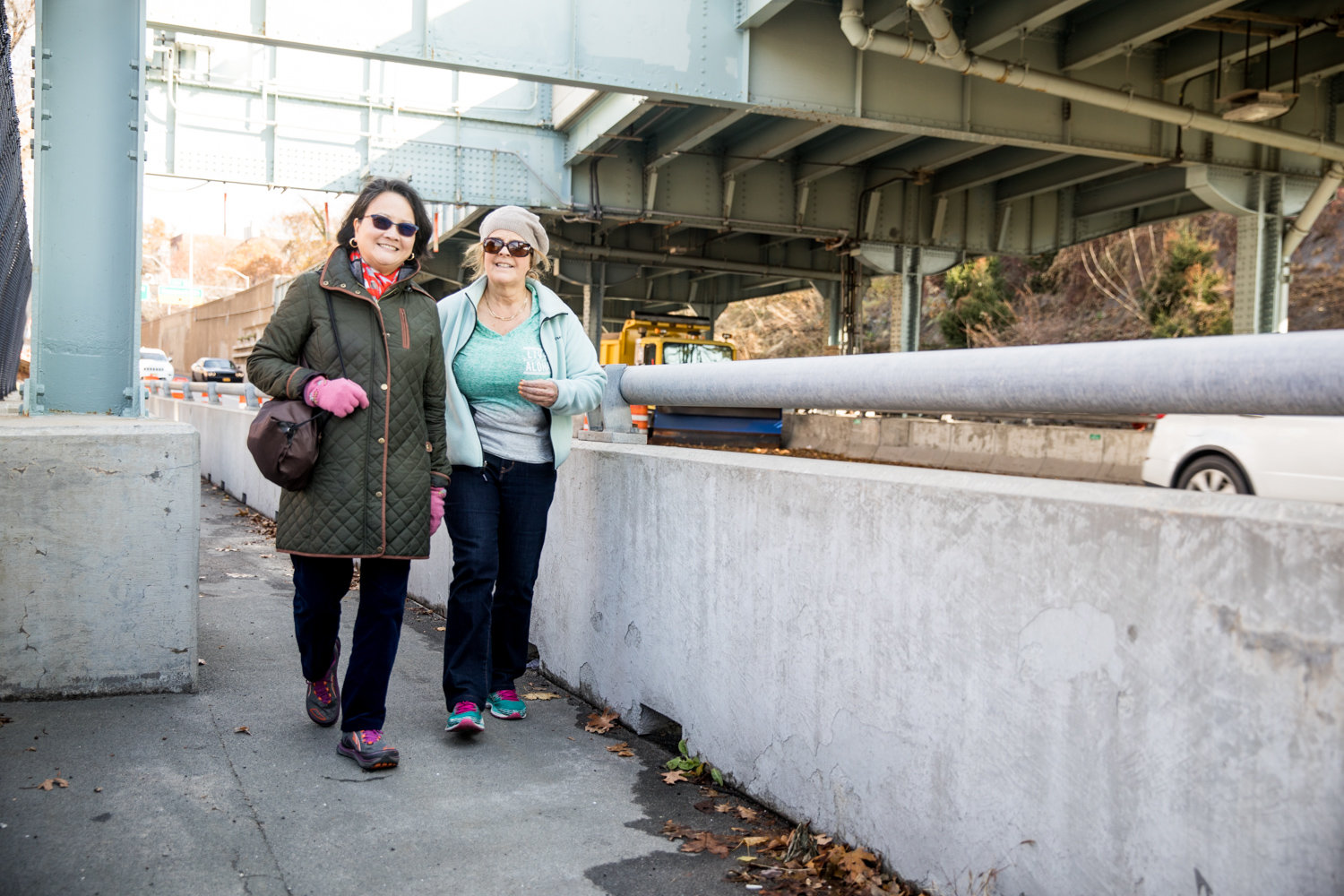 Sherrie Lem, left, and Melissa Schori walk toward Manhattan via the pedestrian walkway on the Henry Hudson Bridge. Lem and Schori are thrilled the walkway is open after being closed for more than a year.
JULIUS CONSTANTINE MOTAL 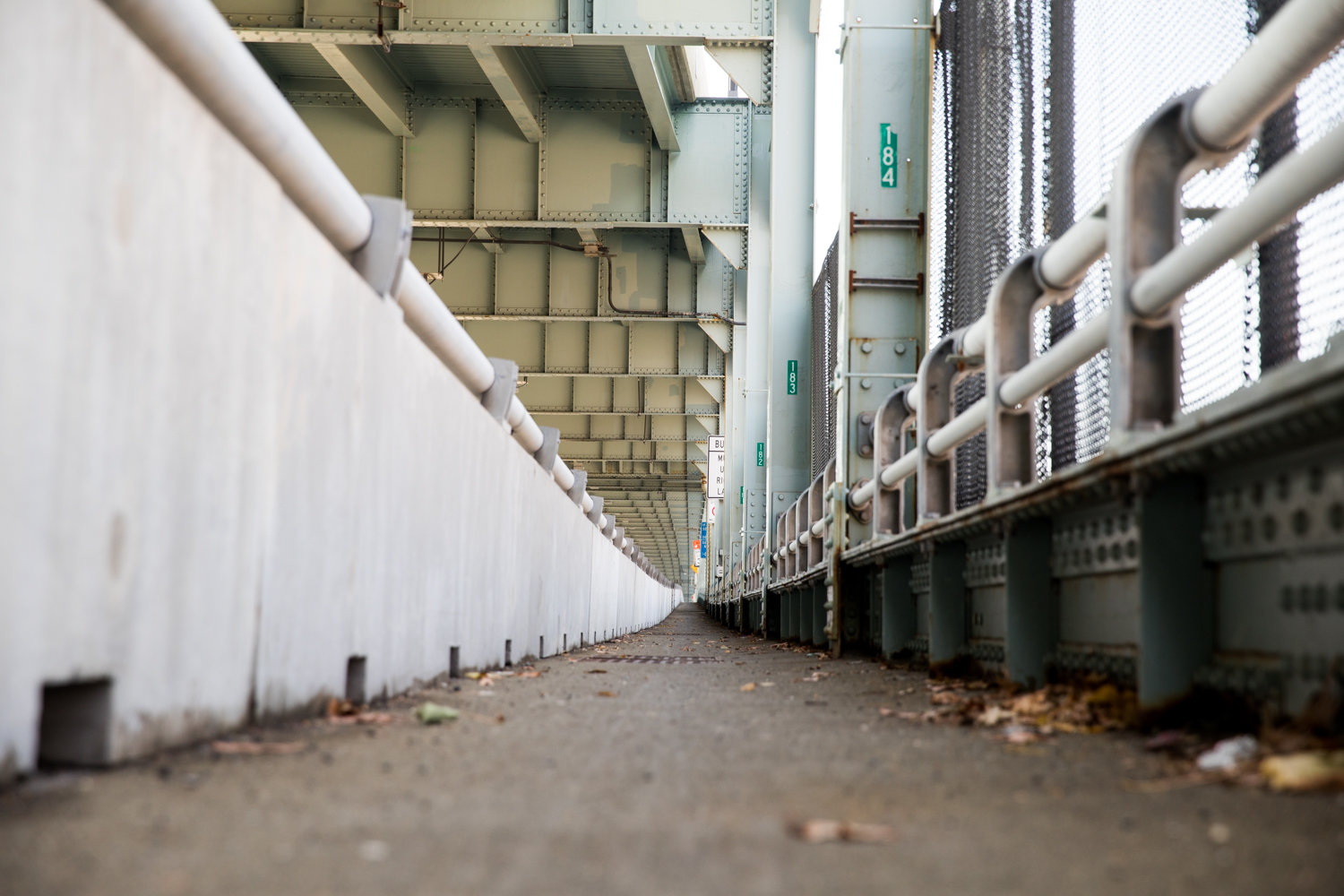 Those who prefer to walk between the Bronx and Manhattan by foot can rejoice now that the Henry Hudson Bridge’s pedestrian walkway has finally reopened.
JULIUS CONSTANTINE MOTAL 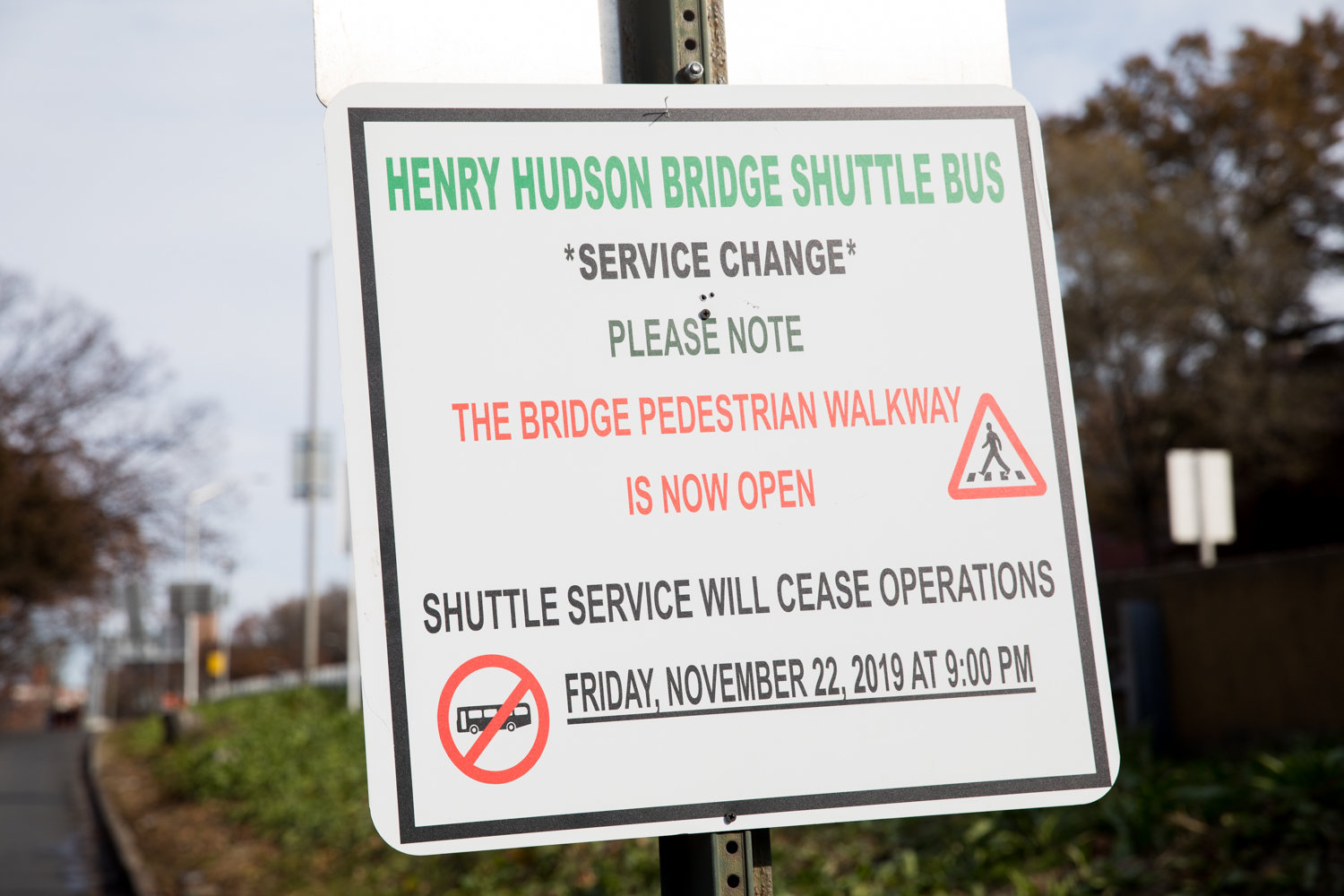 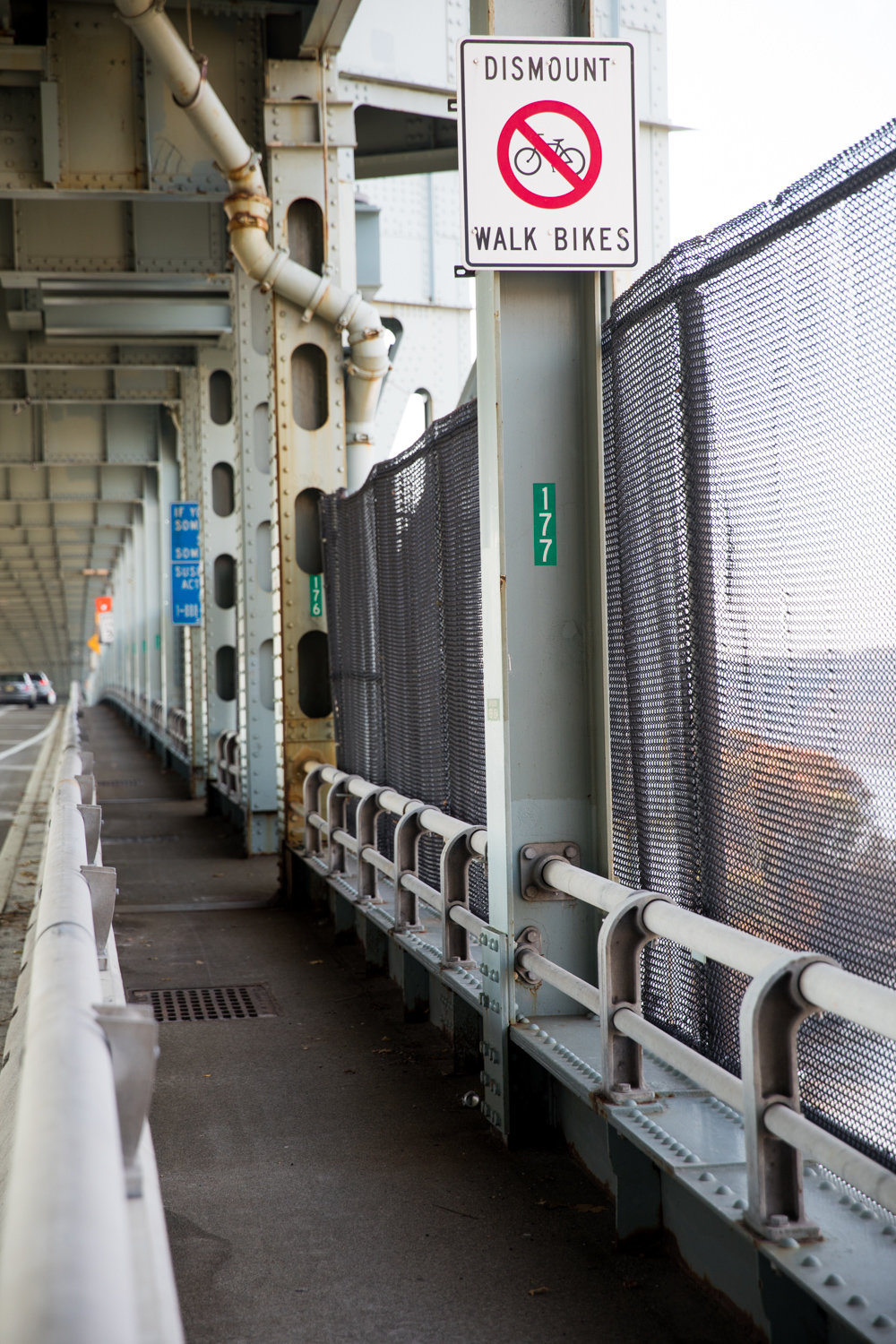 A sign along the Henry Hudson Bridge’s pedestrian walkway informs people that they need to walk their bikes rather than ride them along the path.
JULIUS CONSTANTINE MOTAL
Previous Next
By KIRSTYN BRENDLEN

A year and eight months after its initial closure, the pedestrian path on the Henry Hudson Bridge has finally re-opened to both feet and bicycles once again.

Construction on the bridge connecting the Bronx and Manhattan sides of the Spuyten Duvyil Creek has been ongoing since late 2017, with one southbound lower-level traffic lane closed for most of that time. The pedestrian path was shut down a few months later, drawing the ire of walkers and bikers who frequented the bridge along the Henry Hudson Parkway.

Officials with the Metropolitan Transportation Authority tried to make up for the lack of pedestrian access by providing a free shuttle across the bridge. But many saw little convenience in such a service, which typically ran just once every hour — long enough that someone could have walked back and forth on the bridge three times while waiting to catch the shuttle.

The MTA shut down that shuttle Nov. 22, just in time for the original path to re-open. While the wait to get pedestrian access to the Henry Hudson Bridge may have seemed eternal, it was actually all done ahead of schedule, according to Dan Padernacht, chair of Community Board 8’s traffic and transportation committee.

“They estimated it would take around 18 months or so (for) the work they needed to get done,” Padernacht said. Instead, it was a couple months faster.

The re-opening couldn’t have come soon enough for Padernacht, who presided over many meetings during the past year or so where pedestrians protested the closures. The MTA maintained it was simply unsafe for the path to remain open during the $86 million facelift that not only removed physical tollbooths from the roads, but also reconstructed the bridge’s iconic steel arches that haven’t been touched too much since the bridge opened in the 1930s.

“Most people understood why it needed to be closed once they saw what work was going to be done by the MTA,” Padernacht said. “You would see that the lane where the pedestrian path is was being used by the MTA for equipment, and there was no way for any individual to use that path.”

David Gellman who lives near the bridge and is also a frequent cyclist, said that while he prefers to avoid the tourists that tend to frequent the parks on the Manhattan side of the bridge, he’s glad the pathway is open again. The Broadway Bridge, he said, was a dangerous alternative for cyclists who had to ride across it into Manhattan.

“Coincidentally I saw a friend biking by and his wheel got caught in the grate, and he flipped,” Gellman said. “It’s really awful.”

Now that the lower-level pathway is back open, Gellman has his sights set on a larger goal: Encouraging the MTA to re-open the upper level walkway, which was closed in 2010 after a previous bridge renovation.

Last year, when pedestrians and cyclists at traffic and transportation meetings were protesting the closure, Gellman was trying to convince the MTA to re-open the upper level pathway for the duration of the closure.

“It’s basically a piece of decking of the bridge separated from traffic with Jersey barriers,” he said. “There was a very similar situation in place on the upper deck for literally generations.”

Gellman estimated at the time that the free shuttle would cost the MTA around $20,000 each month, where the upper level path would have included a one-time construction.

“This has been like dealing with many state bureaucracies,” Gellman said. “What this needs is someone like the governor to say, ‘It makes sense, figure it out.’ We’re not talking about building a bridge for $475 million. We’re talking about dropping a bunch of Jersey barriers.”

As the MTA reached the end of its bridge renovation, Gellman hopes the authority will take up the cause of the upper-level pathway once more.

“We accept the fact that decades ago, Robert Moses decided to make a gash through Riverdale, and destroyed Riverdale Avenue, and plopped down the Henry Hudson Parkway,” Gellman said. “We tolerated it for generations. Part of the deal was we got two pedestrian paths, until a decade ago, when they said, ‘Ah, you don’t need two.’”

The lower-level pathway requires cyclists to dismount and walk their bikes across the span, mostly because the path is not wide enough for a bike and a pedestrian, or two bikes to pass each other safely.

The upper level pathway could even become part of a much larger project — the Empire Trail, the proposed 750-mile pathway intended to connect New York City to New York-Canada.

The project is meant to bring New Yorkers back to nature and connect the various parts of the state as one. It already travels through Van Cortlandt Park, along the currently closed Putnam Trail.

And, Gellman said, it’s currently set to cross the Broadway Bridge, which he described as “awful” for bicycles.

“This would be a very clean, safe way to get people onto the Riverside Park pathway,” he said of the Henry Hudson. “Going across the bridge, it has a direct connect to it.”

Gellman has presented his idea to MTA officials, to whom he described as not particularly interested. Gellman also tried to enlist the New York Metropolitan Transportation Council — which coordinates transportation projects in New York City, Long Island, and the lower Hudson Valley— but while not much has come of that, he is holding out some hope.

“They were interested,” Gellman said. “Polly Trottenberg, the commissioner, said she was interested, and would like to get some more information. She’s having her staff investigate it.”