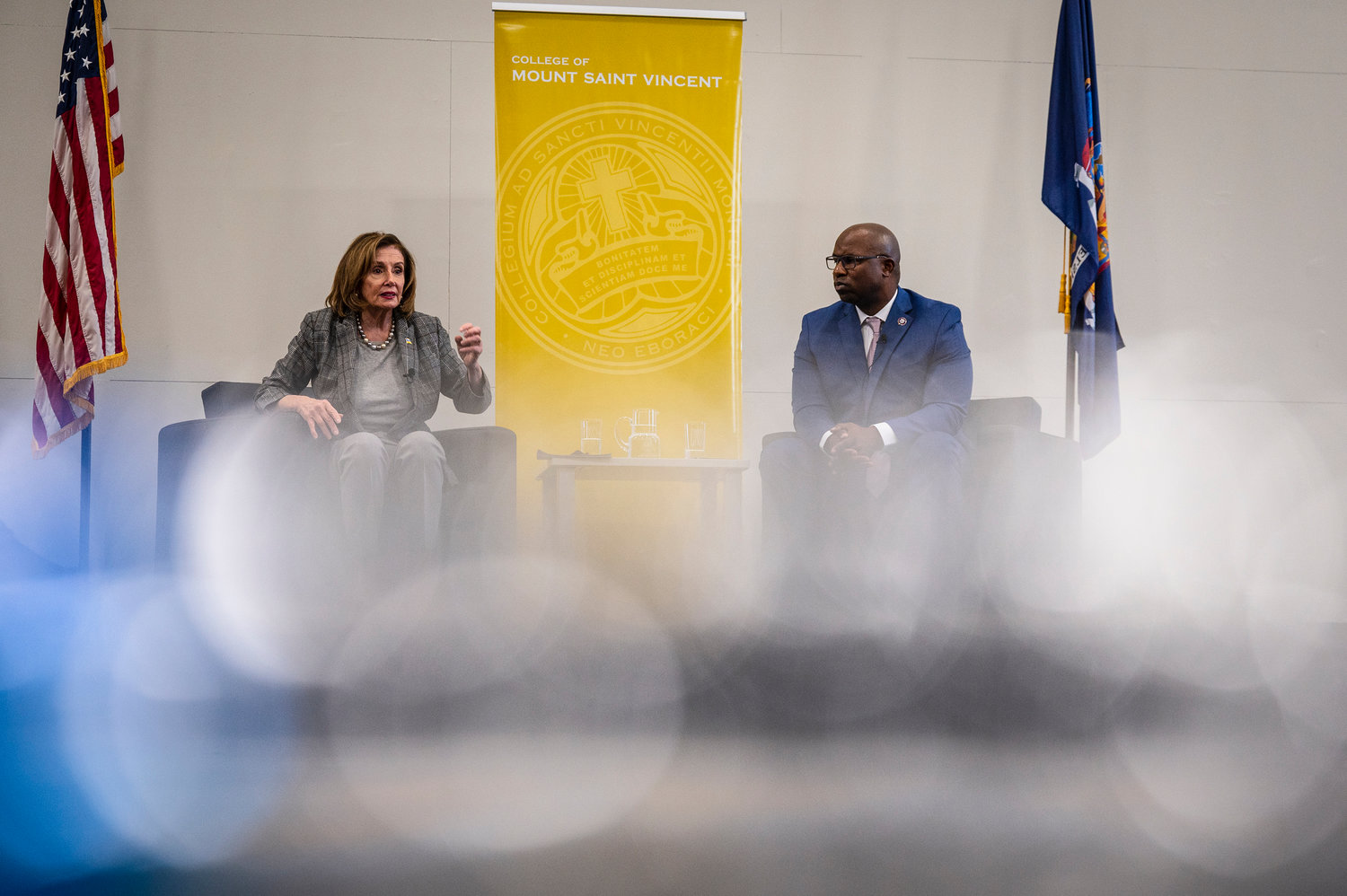 U.S. Rep. Jamaal Bowman and House Speaker Nancy Pelosi got together for a town hall meeting this past Monday at the College of Mount Saint Vincent. Donning a Ukrainian-flag lapel pin, Pelosi.
Hiram Alejandro DurÃ¡n 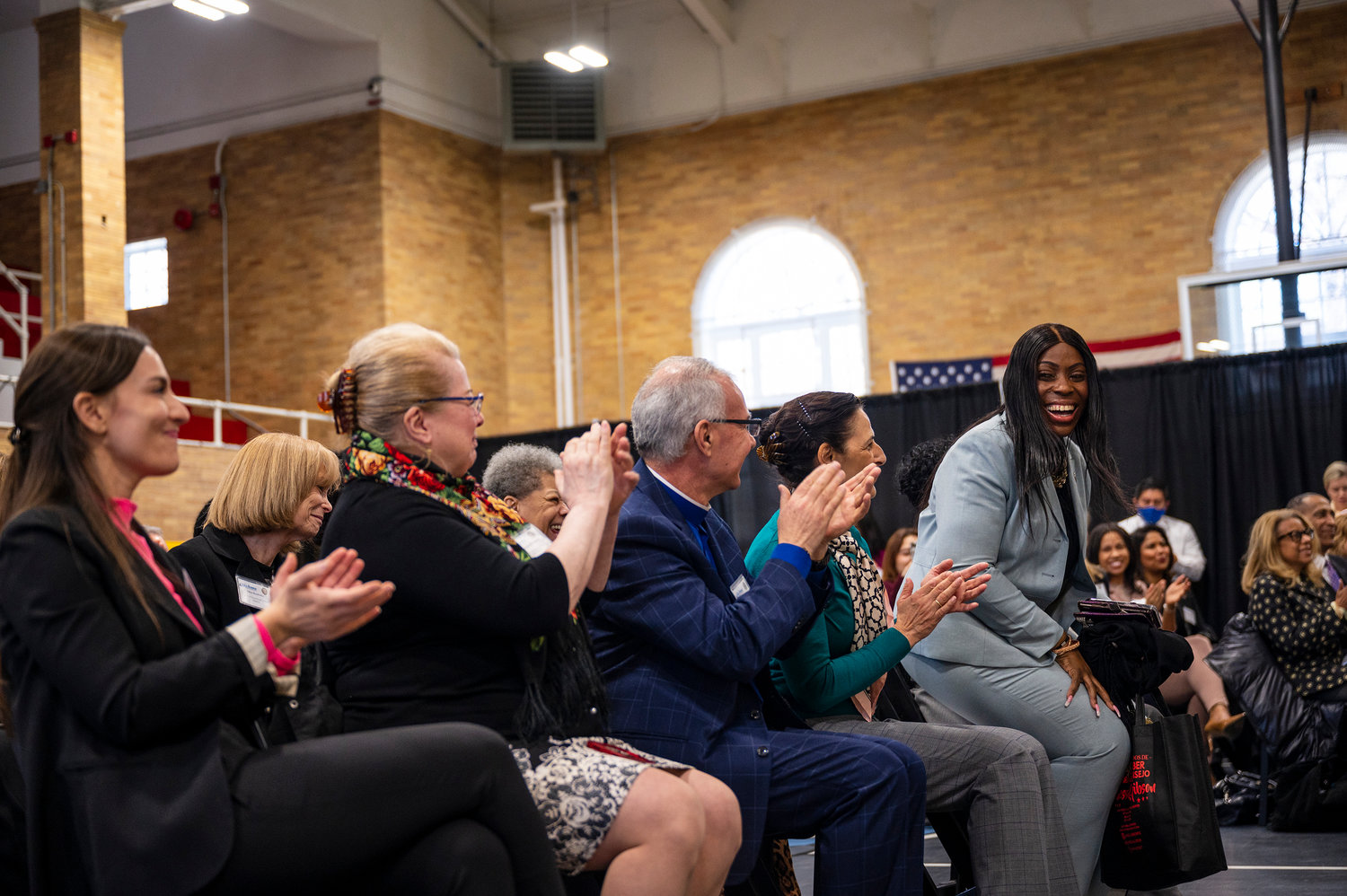 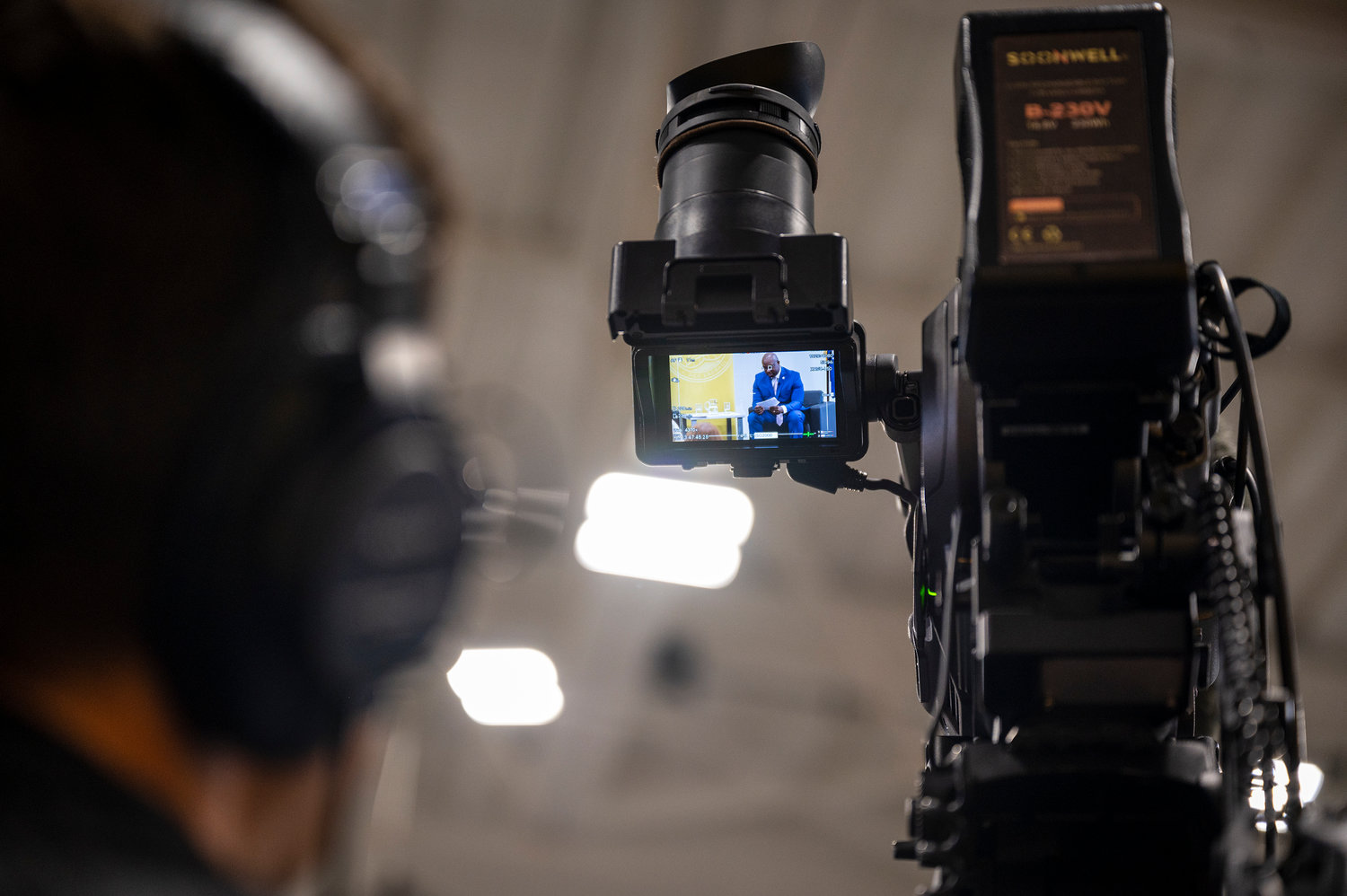 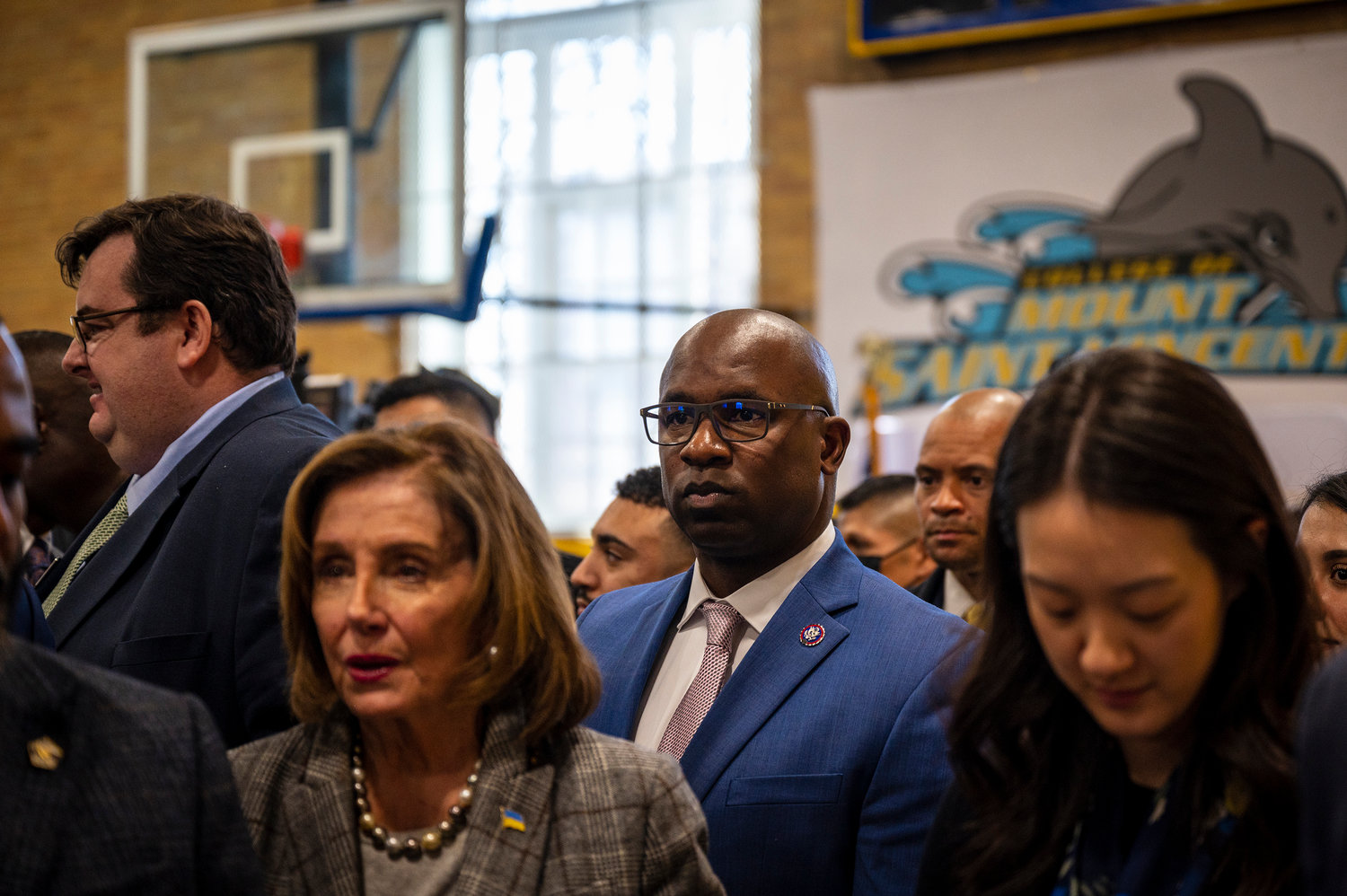 U.S. Rep. Jamaal Bowman takes a few minutes to talk with some of the invitees to his Monday town hall with House Speaker Nancy Pelosi at the College of Mount Saint Vincent.
Hiram Alejandro DurÃ¡n 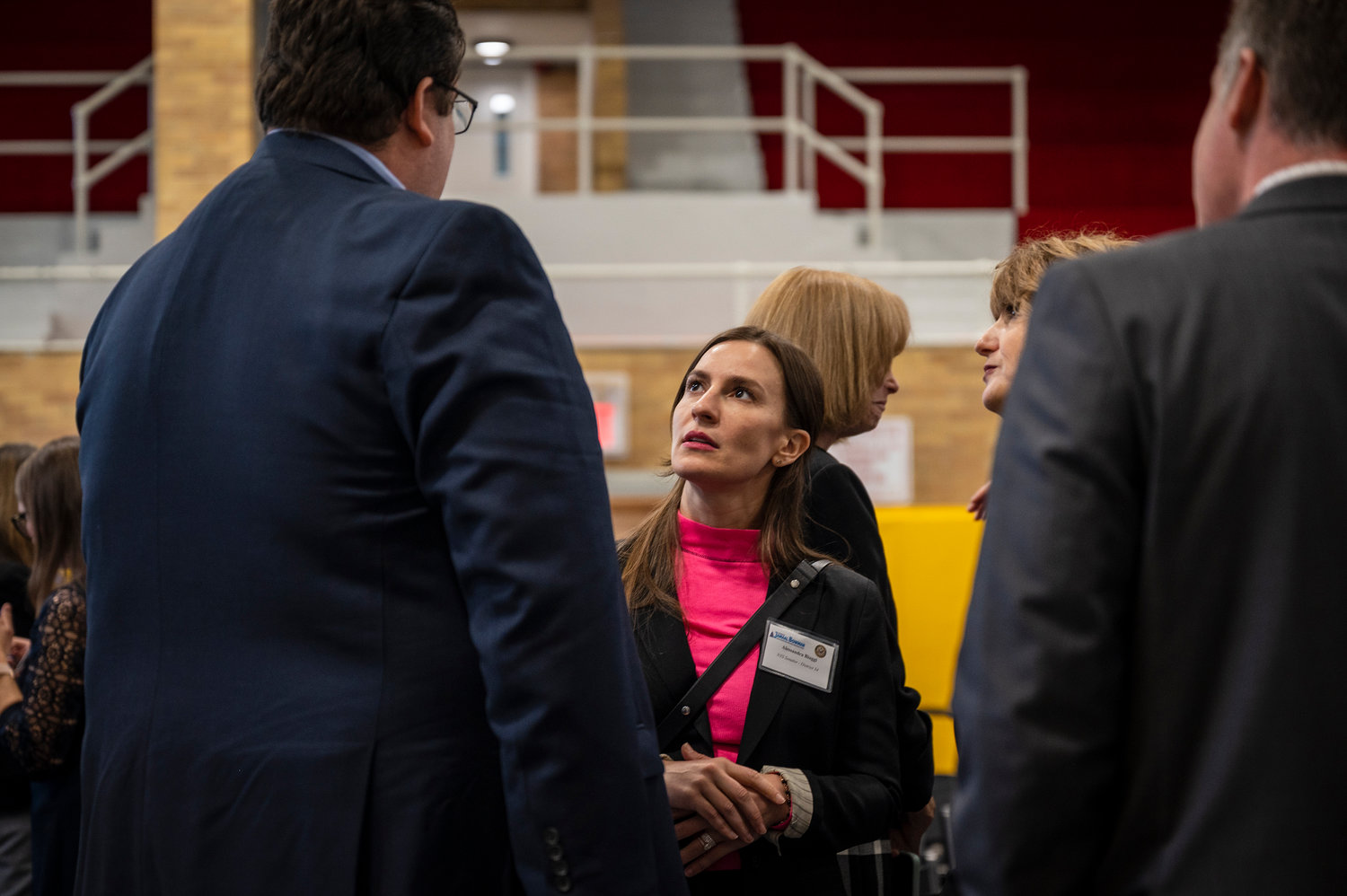 State Sen. Alessandra Biaggi — who is running for the congressional seat currently held by Tom Suozzi — was one of a number of local elected invited to U.S. Rep. Jamaal Bowman’s town hall with House Speaker Nancy Pelosi at the College of Mount Saint Vincent earlier this week.
Hiram Alejandro DurÃ¡n 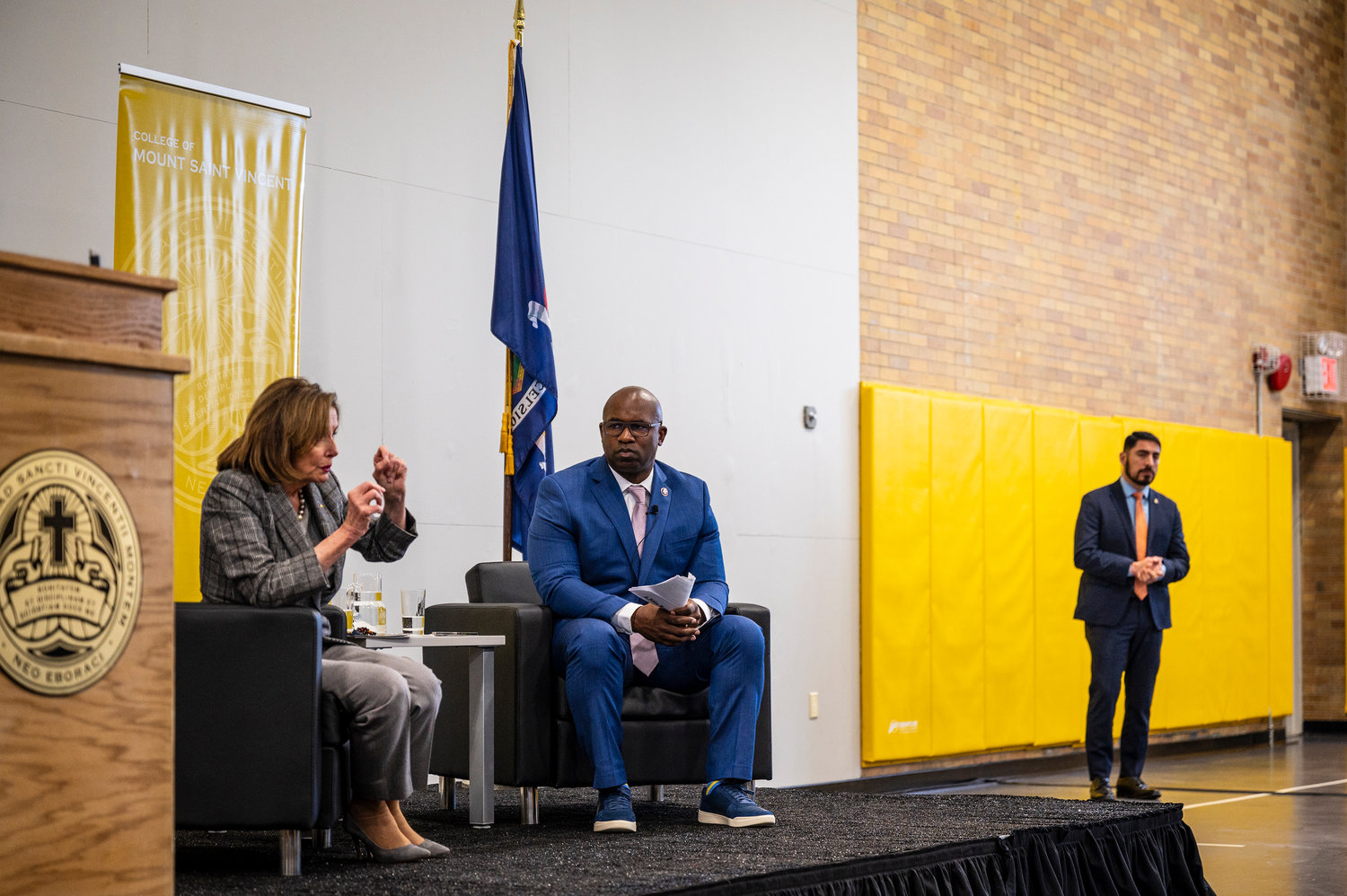 U.S. Rep. Jamaal Bowman and House Speaker Nancy Pelosi got together for a town hall meeting this past Monday at the College of Mount Saint Vincent. Donning a Ukrainian-flag lapel pin, Pelosi.
Hiram Alejandro Durán
Previous Next
By SACHI McCLENDON

House Speaker Nancy Pelosi stood side by side with U.S. Rep. Jamaal Bowman at Riverdale’s College of Mount Saint Vincent Monday for a half-hour “town hall” to discuss topics ranging from the Russian invasion of Ukraine to the speaker’s working relationship with the congressman.

Rather than answer questions directly from the public, like more-traditional town halls, Pelosi fielded questions solely prepared by Bowman.

Before the Q&A began, Bowman tried to brush away the notion that the Democratic party is beset by in-fighting. “Pelosi often refers to the party as a big tent. And it is a big tent. It captures the diversity of our country and it represents the true diversity of our country,” he said, adding that while they may disagree on legislation, Pelosi has never put a muzzle on him. “She’s never called me into the principal’s office and said, ’Jamaal, don’t do this. Jamaal, don’t do that’.”

Yet the two lawmakers have disagreed on legislative matters in the past. Last November, Bowman — who more often than not is aligned with the more progressive wing of the party — voted against Biden’s $1.2 trillion infrastructure bill after the party leadership wouldn’t vote on a larger spending bill at the same time. When asked later at the town hall about his no vote, Pelosi replied that she was upset — but she did so with a smile.

Pelosi also endorsed U.S. Rep. Eliot Engel, who lost to Bowman in the 2020 Democratic primary. Yet, in a show of statesmanship, Bowman appears to view all of that as water under the bridge. “There is going to be some conflict — that’s how democracy works. But Madame Speaker navigates it and leads it and encourages it and embraces it in a way that we all can learn from,” he said.

Pelosi, for her part, returned his compliment in kind. “Congressman Jamaal Bowman has been a relentless voice on Capitol Hill for working families in his New York community and across the nation,” Pelosi said in a statement announcing the event.

During the town hall, Pelosi made mention of the political battles she’s prepared to wage, with gun violence legislation being a top priority. “We are not going away until we pass this legislation.”

And, of course, Bowman asked about the Russian invasion of Ukraine. Pelosi, who wore a Ukrainian flag pin on her lapel, said that Ukrainian President Volodymyr Zelenskyy would be virtually addressing all of Congress on Wednesday.

While the duo was expected to discuss the many successes of the American Rescue Plan Act, the topic was not discussed at length.