Poet sings of sensual scenes from Riverdale to Reykjavik 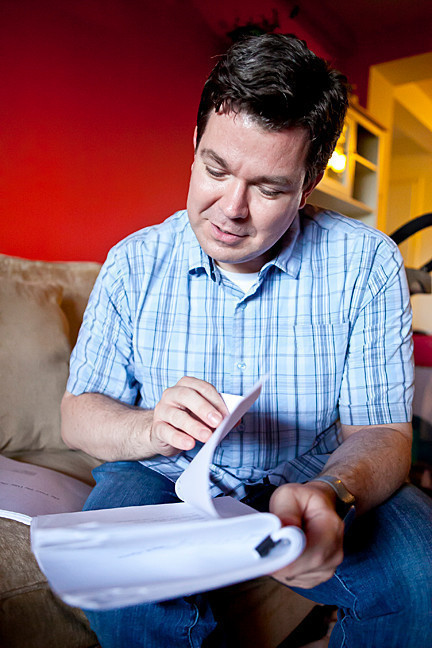 Matthew Thorburn, a Bronx Council on the Arts BRIO winner for poetry, at his home on June 20.
Marisol Díaz/The Riverdale Press
By Shant Shahrigian

In Matthew Thorburn’s first poetry project, he and other high school students in his native Michigan collaborated via e-mail with counterparts in Japan. At the end of the undertaking in 1991, schools in the U.S. and Japan published entries by students on both sides of the globe — an intimation of things to come for Mr. Thorburn.

Since then, scenes from Iceland, China and Japan, along with his home of Riverdale, have filled his four published books of poems. His latest effort, This Time Tomorrow, earned him a Bronx Recognizes Its Own (BRIO) award for artistic excellence from the Bronx Council on the Arts.

“It was this really interesting experience at places I really wanted to come back to, which I did through writing because I wouldn’t actually be able to go back to Iceland,” he said.

“In Reykjavik” evokes the mixed sense of wonder and being lost that travelling abroad can bring:

...Nothing feels familiar
enough. Nothing nods back. In a misty
drizzle we look for Ásmundur Sveinsson’s
studio-turned-museum and drive by
Einar Jónsson’s instead. “Did this happen
when they were alive, too?”

Mr. Thorburn, who works in communications for an international law firm in Manhattan, said he uses lunch breaks in midtown and spare moments in his Riverdale apartment to craft his freeform verse.

His book-length poem The Trees The Way The Light describes a year in Riverdale, with a few excursions to New Jersey and his in-laws’ native China. Mr. Thorburn, 40, is currently seeking a publisher for the work.

In the tradition of poets from Chaucer to T.S. Eliot, he starts his work off with a unique invocation of the spring. It and the rest of the poem are haunted by Mr. Thorburn’s feelings over his and his wife’s unborn daughter:

Winter’s so long I forget
what spring is like
until a weird crackle makes me
duck and look up...