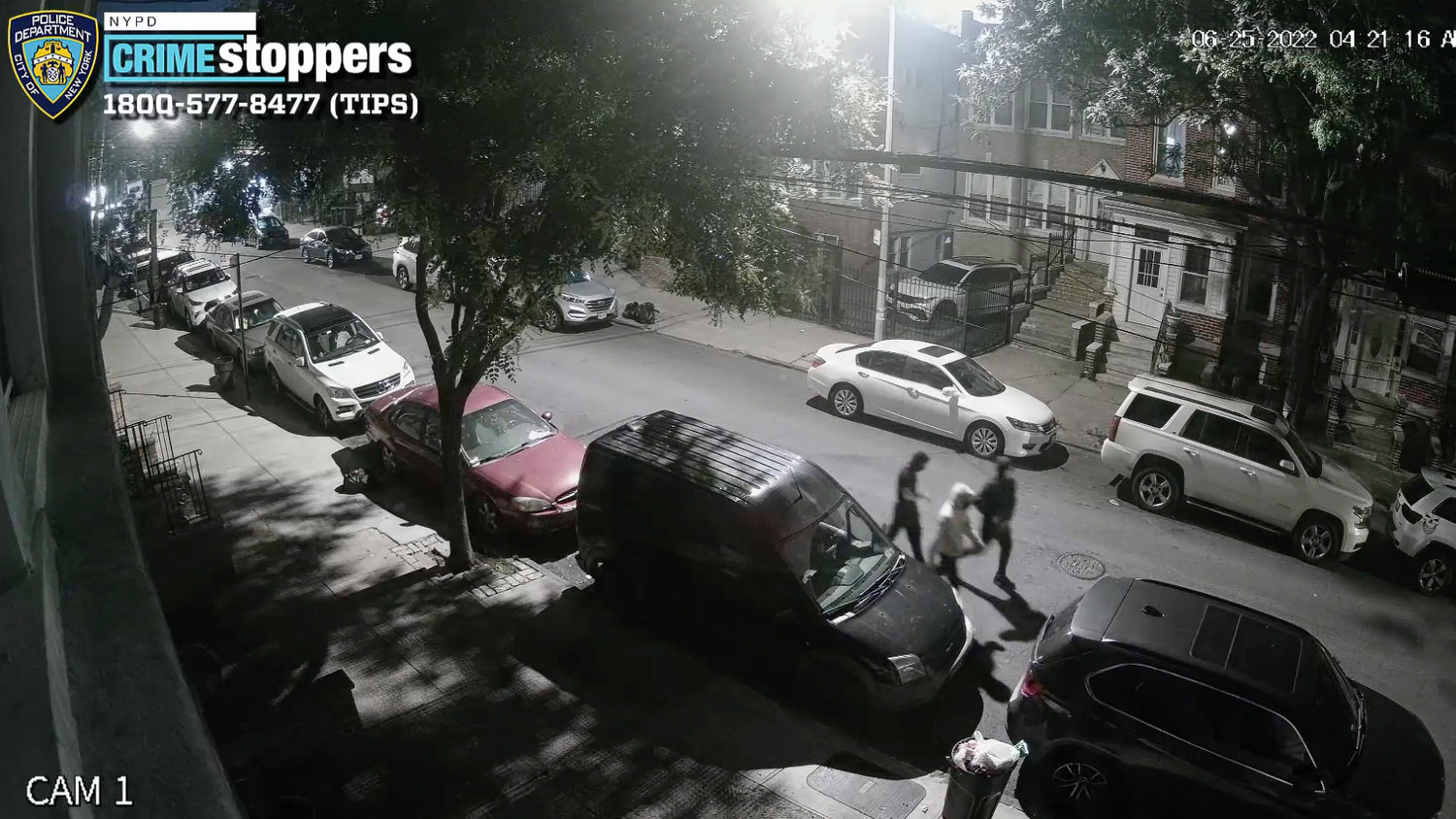 The three individuals pictured were being sought for a robbery in front of 130 West 230th Street that resulted in the death of a 51 year-old man on June 25. The three were arrested last weekend. They are Nickoles Rodriguez, 24, Kelvin O’Brien, 21, and Yean Santiago, 19.
Hiram Alejandro Durán
By Sachi McClendon

The New York Police Department has arrested three suspects wanted for beating a Kingsbridge Heights resident to death during a robbery in late June.

Nickoles Rodriguez, 24, Kelvin O’Brien, 21, and Yean Santiago, 19, were arrested over a two-day span last Friday and Saturday by 50th Precinct officers. They all  face several murder and robbery charges related to the attack.

Police responded to a robbery in progress in front of 130 W. 230th St., on June 25 at 6:15 a.m. Upon arrival, officers  found an unconscious man lying on the ground whose face had been badly beaten.

EMS transported the victim to St. Barnabas Hospital, where he was pronounced dead several days later on July 2. Investigators later identified the victim as 51-year-old Pedro Rodriguez, whose home was just a few feet away from the mugging. The NYPD said the two men, who share the same surname, did not know each other and are not thought to be related.

Video surveillance from around the time of the assault shows three men getting out of a Kia Optima with New Jersey license plates and walking over to where the victim had been standing at the time of the incident. Soon after, the video shows the men getting back into the car and driving off. Police reported that the car had last been spotted on West 207th Street in Manhattan later that day.

Police did not say, however, what the suspects stole from the victim at the time of the attack.

A second robbery occurred over the fourth of July weekend in central Riverdale. On the morning of July 2, a 23-year-old NYPD auxiliary officer was shot in the leg outside a 72-unit apartment building.

The preliminary investigation revealed three men in masks surrounded the victim outside of 3800 Independence Ave. around 4:30 a.m., shot him once in the leg and then stole his 2017 white Kawasaki motorcycle and cell phone.

Upon arrival, officers found the man wounded and EMS transported the victim to St. Barnabas Hospital in stable condition. No arrests have been made and the investigation is ongoing.

These two high-profile muggings have caused concern for certain people in the community.

Longtime Riverdale resident Susan Jacobs lives about five blocks away from the shooting. She said this most recent incident has shattered the sense of security and safety she feels in the neighborhood. “I never used to, but now I think about where I’m going,” she said. “I think about whether or not it’s going to be light out. I think about getting home. It’s a terrible feeling. It seems like everybody today has a gun. That may not be a true perception, but it’s what it feels like.”

Earlier this year, Jacobs had an even closer brush with violence. In March, she was at the Bronx County Hall of Justice for jury duty when a man shot two brothers around 7:20 p.m., leaving one dead and the other wounded in the leg.

“The first time I heard a live gunshot was when I was called for jury duty in March,” Jacobs said. “I was right there. It was probably the most frightening thing I have witnessed all year.”

The city saw a big spike in shootings over the Fourth of July weekend. According to the NYPD, there were 24 shootings with 31 victims — a 60 percent jump compared to last year’s holiday weekend.

On July 1, in the Bronx alone, two men were shot and killed within an hour of each other in separate incidents.

Then on July 4, three people were shot in Belmont, one of whom — a 62-year-old bystander — was killed right in front of his neighbors.

“This July 4 weekend was a critical reminder of the ongoing gun violence that has taken over our streets, taking lives and leaving far too many families mourning across our nation, our city, and right here in our Borough,” Bronx borough president Vanessa Gibson said in response to the shootings.

“We must continue to work at all levels of government to see immediate change and to stop the violence in our communities.”

That said, shootings across the city were down last month compared to June 2021, according to the NYPD’s latest crime statistics.

The NYPD attributes the 24 percent drop to its recent push to get guns off the street.

“The NYPD’s work to drive down gun violence in New York City is taking hold — with the number of shootings decreasing across all five boroughs,” police commissioner Keechant Sewell said in a press release.

“We are encouraged by this downward trend in gun violence as summer gets underway, but realize that we must remain focused on our critical public-safety mission — the lives of New Yorkers depend on it.”