Police believe they caught shul vandal, but what is next? 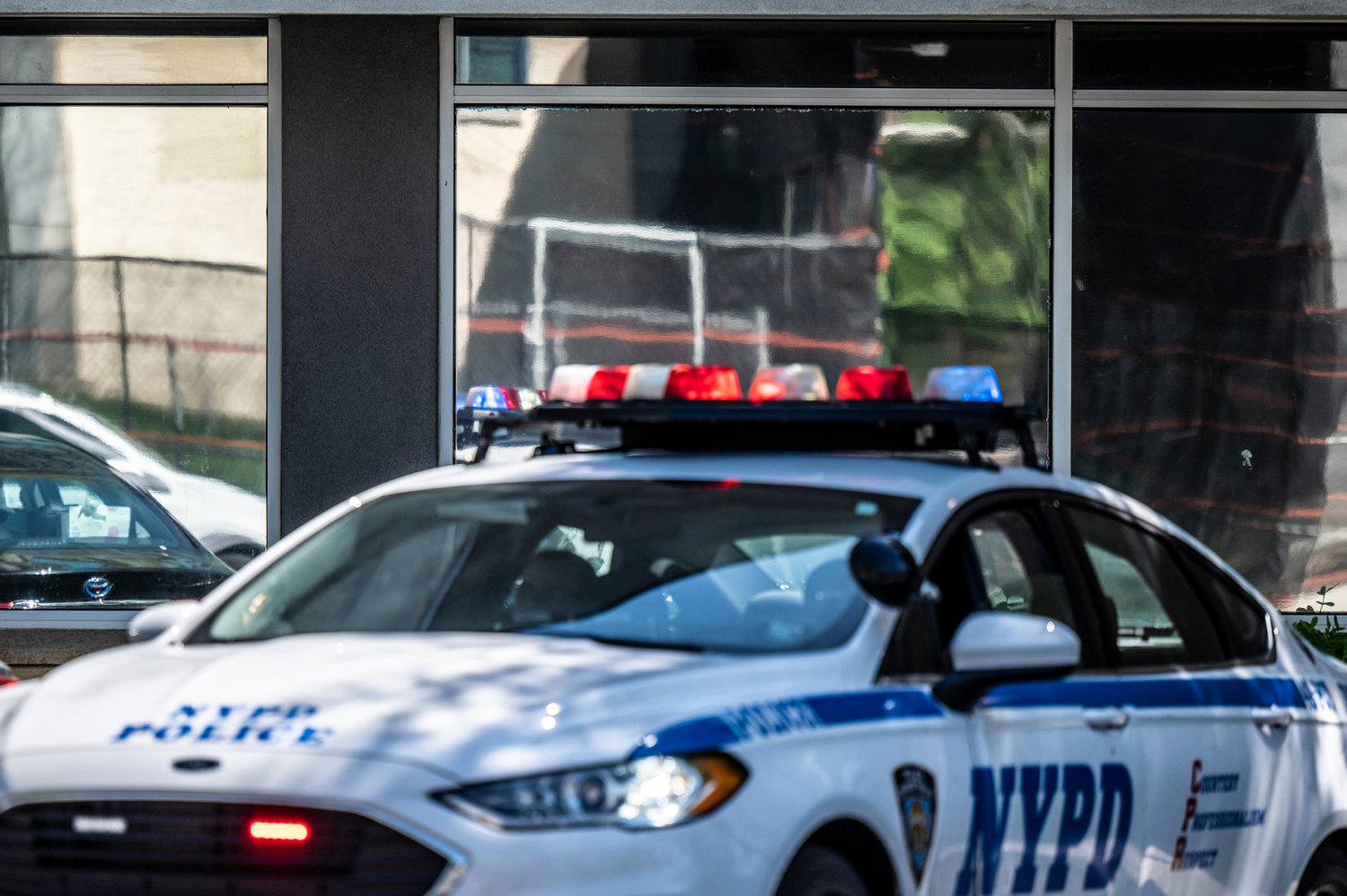 Police presence was increased along a stretch of the Henry Hudson Parkway after someone vandalized four synagogues in that area last month. The police arrested a man they believe is behind the crime spree. Now, community leaders try to repair the damage done to the synagogues and help neighbors put the emotional pieces back together.
HIRAM ALEJANDRO DURÃN/ File 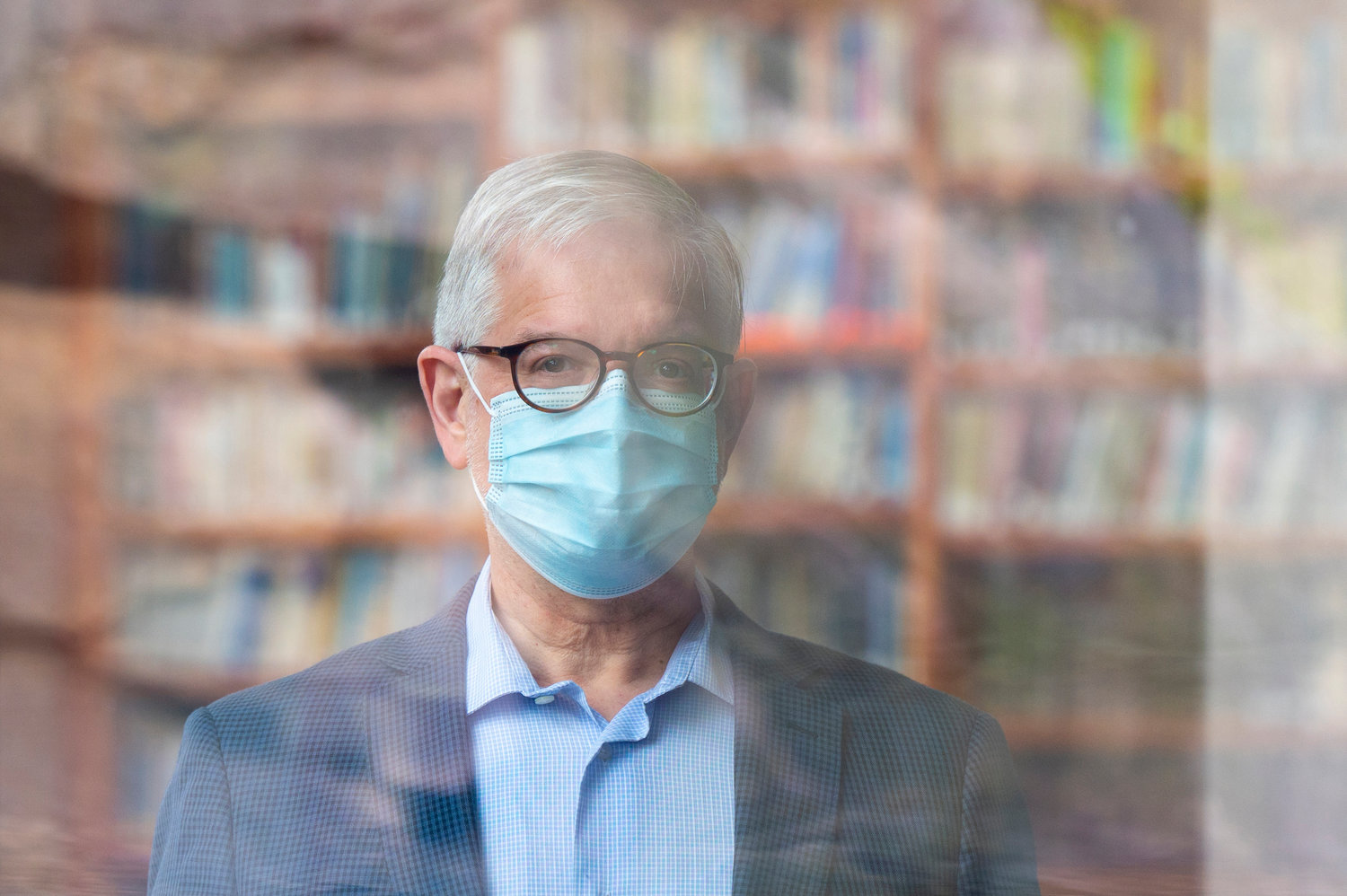 Rabbi Barry Dov Katz told his congregation they should ‘continue living proud and joyful Jewish lives’ in the wake of a string of synagogue vandalism attacks last month. A suspect was arrested last weekend, racking up more than 40 charges in connection with the attack, including many labeled as hate crimes.
HIRAM ALEJANDRO DURÁN/ File 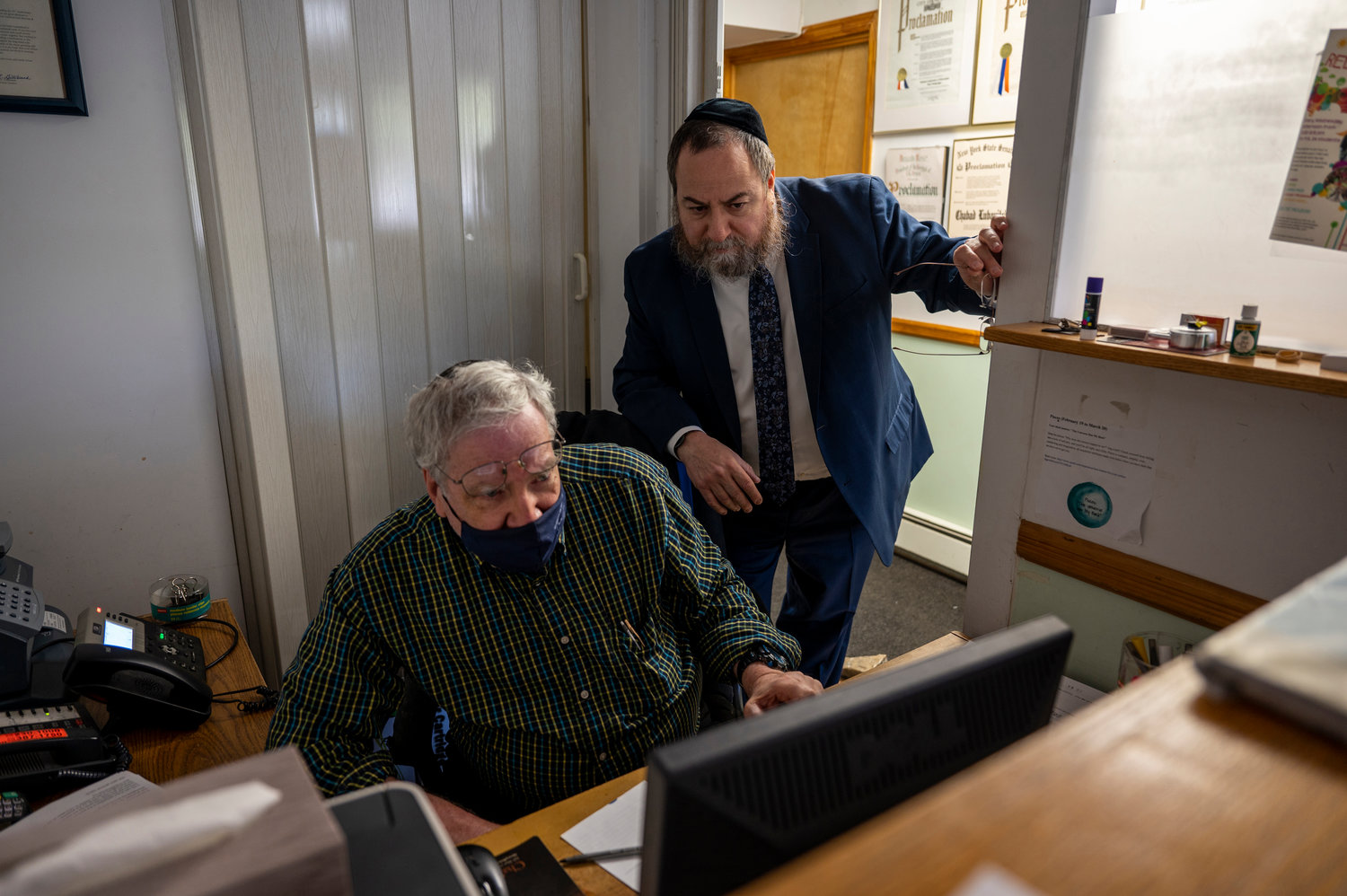 Police arrested a man last Saturday suspected of vandalizing Chabad Lubavitch of Riverdale and three other shuls last month. Now local leaders try to repair the damage and bring the community together in the wake of these attacks.
HIRAM ALEJANDRO DURÃN/ File 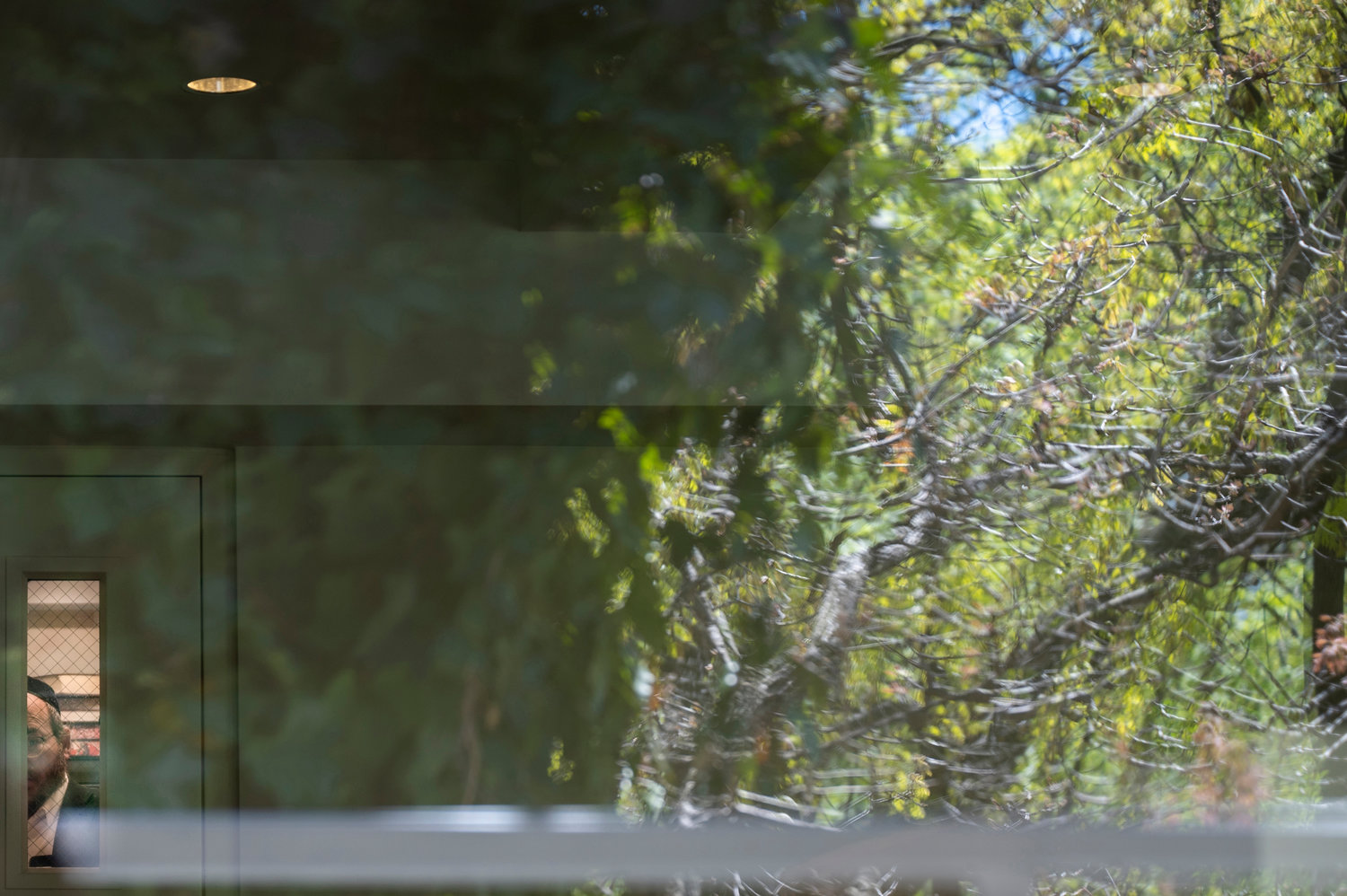 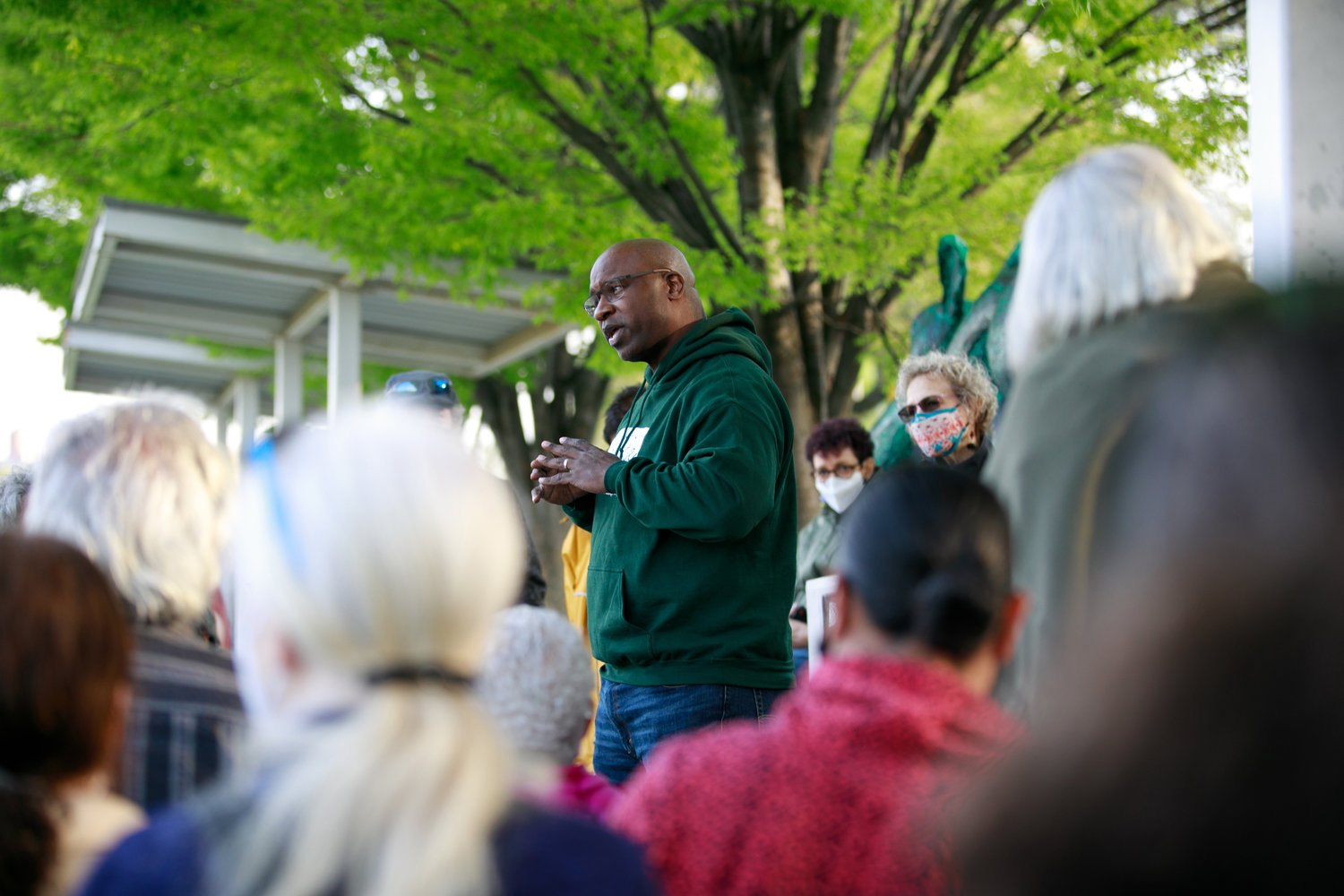 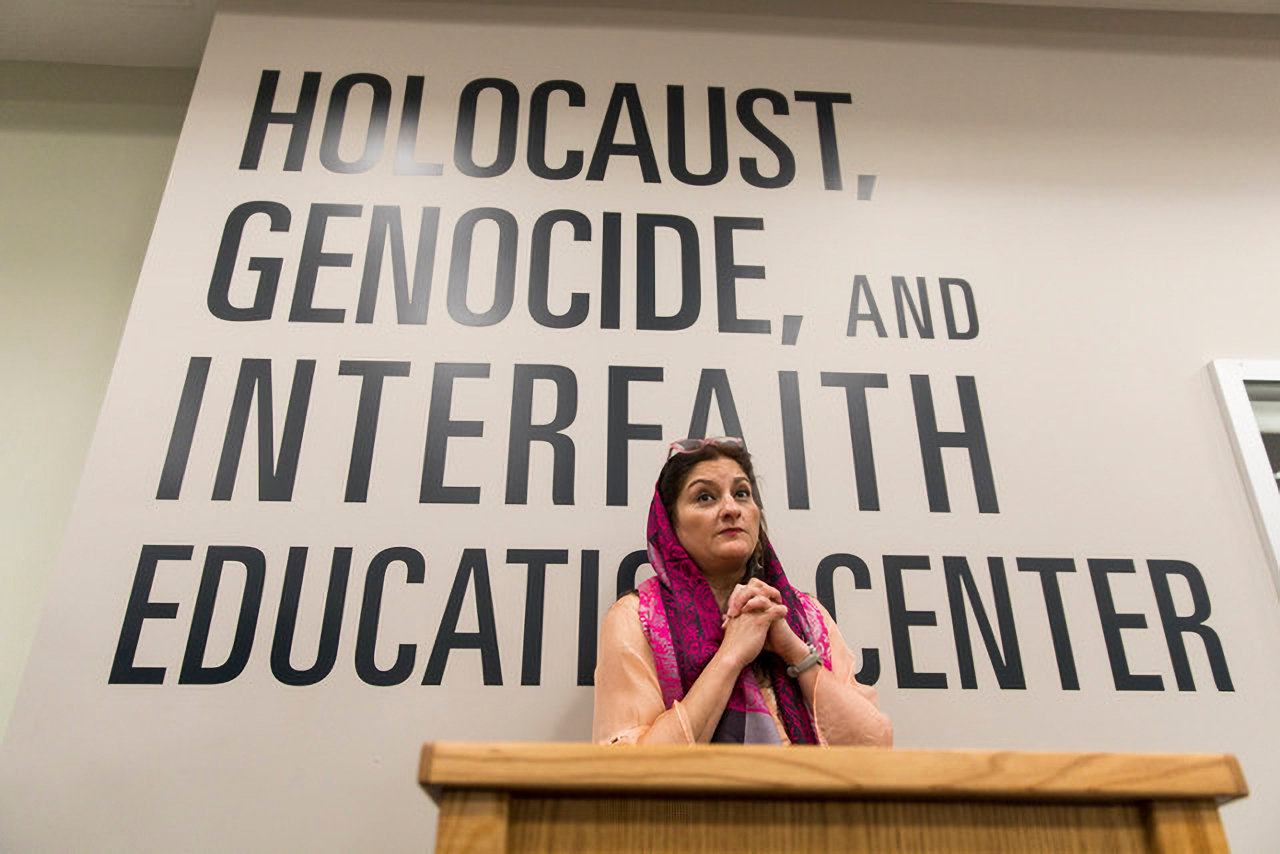 A man suspected of vandalizing four area synagogues in April was arrested last weekend. Mehnaz Afridi — who directs the Holocaust, Genocide & Interfaith Education Center at Manhattan College — is raising money to help those synagogues offset the cost of repairing the damage from the attacks.
JULIUS CONSTANTINE MOTAL/ File
Previous Next

‘This was a horrible attack that feels like a violation of our sacred place.’”
— Rabbi Barry Dov Katz
By ETHAN STARK-MILLER

How should a community come together in the wake of hatred and find a way to collectively heal?

That’s the question many in this corner of the Bronx are asking themselves after at least four synagogues along the Henry Hudson Parkway were targeted by a vandal last month.

That’s exactly what happened early Saturday morning when officers from the 50th Precinct arrested Jordan Burnette, 29. The New York Police Department’s Hate Crime Task Force believes Burnette — who lives at the Whitehall in Spuyten Duyvil — threw rocks and broke the windows at the synagogues and vehicles surrounding them, as well as damaging prayer books and even stealing a bicycle.

He racked up 42 charges in all, and many carry additional weight as hate crimes.

Burnette is free awaiting trial after a Bronx criminal court judge placed him on “supervised release.” That was after an earlier decision from a different judge ordered Burnette held on $20,000 cash bail, despite defense attorneys’ claims he couldn’t be held on bail under current state law.

Caught in the act?

Police say Burnette was in the midst of another synagogue rampage when they nabbed him for riding a bicycle against traffic on Delafield Avenue near West 246th Street in the very early morning hours of Saturday. Police believe Burnette stole that bicycle from the Conservative Synagogue Adath Israel of Riverdale on West 250th Street, not far from where they say he doused a pile of Jewish prayer books with hand sanitizer.

CSAIR had been targeted in rock-throwing attacks the weeks before, along with the Riverdale Jewish Center on Independence Avenue, Chabad Lubavitch of Riverdale on West 246th Street, and Young Israel of Riverdale on Henry Hudson Parkway East. Additionally, the windows of three cars were smashed on West 239th Street near The Moore Family Riverdale Counseling Center run by the Jewish Board of Family and Children’s Services.

Local electeds including Councilman Eric Dinowitz, his father Assemblyman Jeffrey Dinowitz, state Sen. Alessandra Biaggi and U.S. Rep. Jamaal Bowman, thanked the NYPD and Jewish leaders “who came together to stand up to this bigotry in our community” in a joint statement.

“We will continue to support efforts to ensure that all residents feel safe in their own neighborhoods,” they added.

CSAIR rabbi Barry Dov Katz had a clear message for his congregation following the vandalism spree.

“We are a strong community, and this was a horrible attack that feels like a violation of our sacred place,” he said. Still, Katz wanted his congregants to “continue living proud and joyful Jewish lives.

“So, that’s the response to hate. To people who might want you to not be who you are. To celebrate that.”

“Christians, Muslims and Jews … for sure in the area and beyond, have been incredibly supportive,” Katz said. They “reached out with offers of help and support, whatever we need. It’s been really heartwarming.”

One of those faith leaders lending her support is Mehnaz Afridi, who directs the Holocaust, Genocide & Interfaith Education Center at Manhattan College. Afridi quickly set up an online crowdfunding page to raise money for the targeted synagogues in hopes of offsetting the cost to repair the broken windows and doors.

Afridi, who is Muslim, felt the fundraiser was a good way to help the synagogues during her faith’s holiday of Ramadan, she said, especially since it’s a time that emphasizes social action.

“It’s symbolic to me that they’re windows and doors,” Afridi said. “Someone who is a person of faith like me, I believe that we have to open up our doors and our windows to our neighbors.”

With a goal of raising $8,000 to distribute evenly among the four shuls, Afridi already raised more than a third of it. Even some of her Manhattan College students have pitched in, she said.

“People who are not in this community took their time to give $5 or $10,” she said. “It doesn’t matter what you give, but it’s the whole idea.”

Afridi is considering a vigil or demonstration to show solidarity with the local Jewish community. It’s something she has experience doing after bringing together hundreds locally when the Tree of Life synagogue was attacked in Pittsburgh three years ago, killing 11 and injuring seven others.

Jennifer Scarlott, who runs the activist group North Bronx Racial Justice, put together her own rally soon after the attacks. While the original message was speaking out against police brutality, challenging anti-Semitism was included in the overall theme. Joining her were U.S. Rep. Bowman as well as city council candidate Mino Lora.

Another neighbor, Sasha Kesler, says it’s important to bring the community together during times like this. However, figuring out a way to do it can be complicated — especially after learning Burnette is actually a neighbor rather than an outsider.

… or, pulling them apart

Progressives weren’t the only ones rallying in support of the synagogues. A group of  conservative politicians led by former Brooklyn Assemblyman Dov Hikind gathered in front of the Riverdale Jewish Center at one point. He was joined by Long Island congressman Lee Zeldon and Guardian Angels founder Curtis Sliwa. They blamed the state’s reform of cash bail for the vandalism, and demanded lawmakers roll those laws back.

Hikind even described window breaking as the “night of broken glass,” invoking the history of Kristallnacht — when Nazis vandalized Jewish businesses in 1930s Europe.

Hikind isn’t free from scandal himself. He’s been criticized for using racist rhetoric and even wearing blackface to a Purim party when he was an Assemblyman. Eric Dinowitz decried this particular rally, calling it a “campaign stop” through his city council office.

“I am outraged that members of the Republican Party would engage in such blatant opportunism under the guise of supporting the Riverdale Jewish community,” Dinowitz said, in a statement through his council office spokesman. “I will work with anyone willing to take on the fight against anti-Semitism. However, (last week’s) press conference was nothing more than a dishonest attempt to push a conservative agenda.”

Not all Jewish leaders represent the Jewish community, Kesler said, and that goes for Hikind, especially when it comes to Jewish people of color. Still, she believes the community can rise above all of that and learn a great deal from what happened.

“This is an opportunity to really come together as a community and to talk about our experiences of anti-Semitism, our experiences of violence against our Jewish institutions,” Kesler said. “And to think through how we can envision new ways of responding that may actually work better.”

CORRECTION: Cash bail for Jordan Burnette had originally been set at $20,000 before being later overruled by another judge. A story in the May 6 edition listed the bond amount instead.