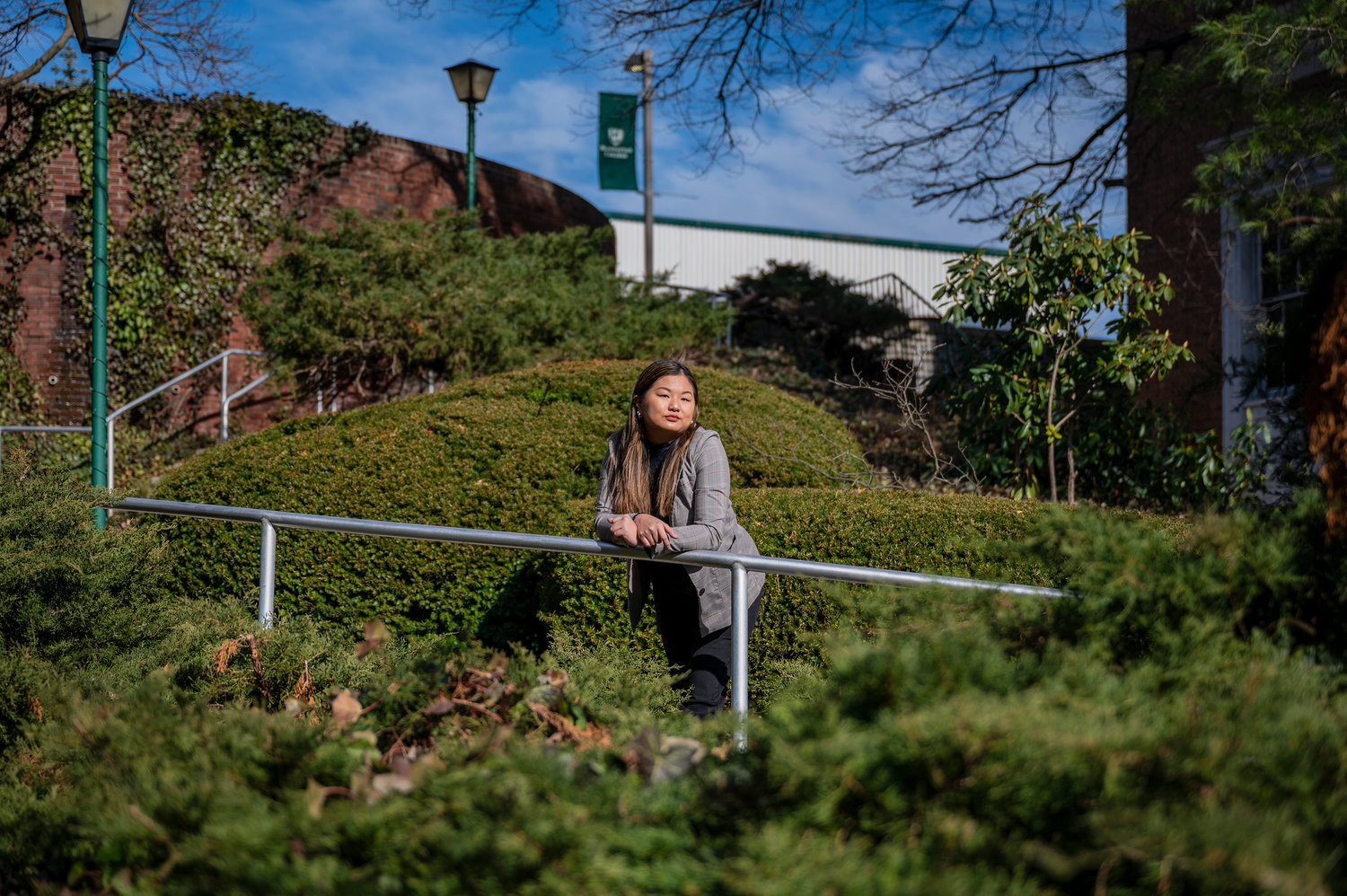 Rebecca Kranich spends her days studying communications and political science at Manhattan College. But this past week, she was one of a small group of students selected to participate in an online videoconference with Pope Francis. Except, in the end, not everyone had a chance to be included.
Hiram Alejandro Durán 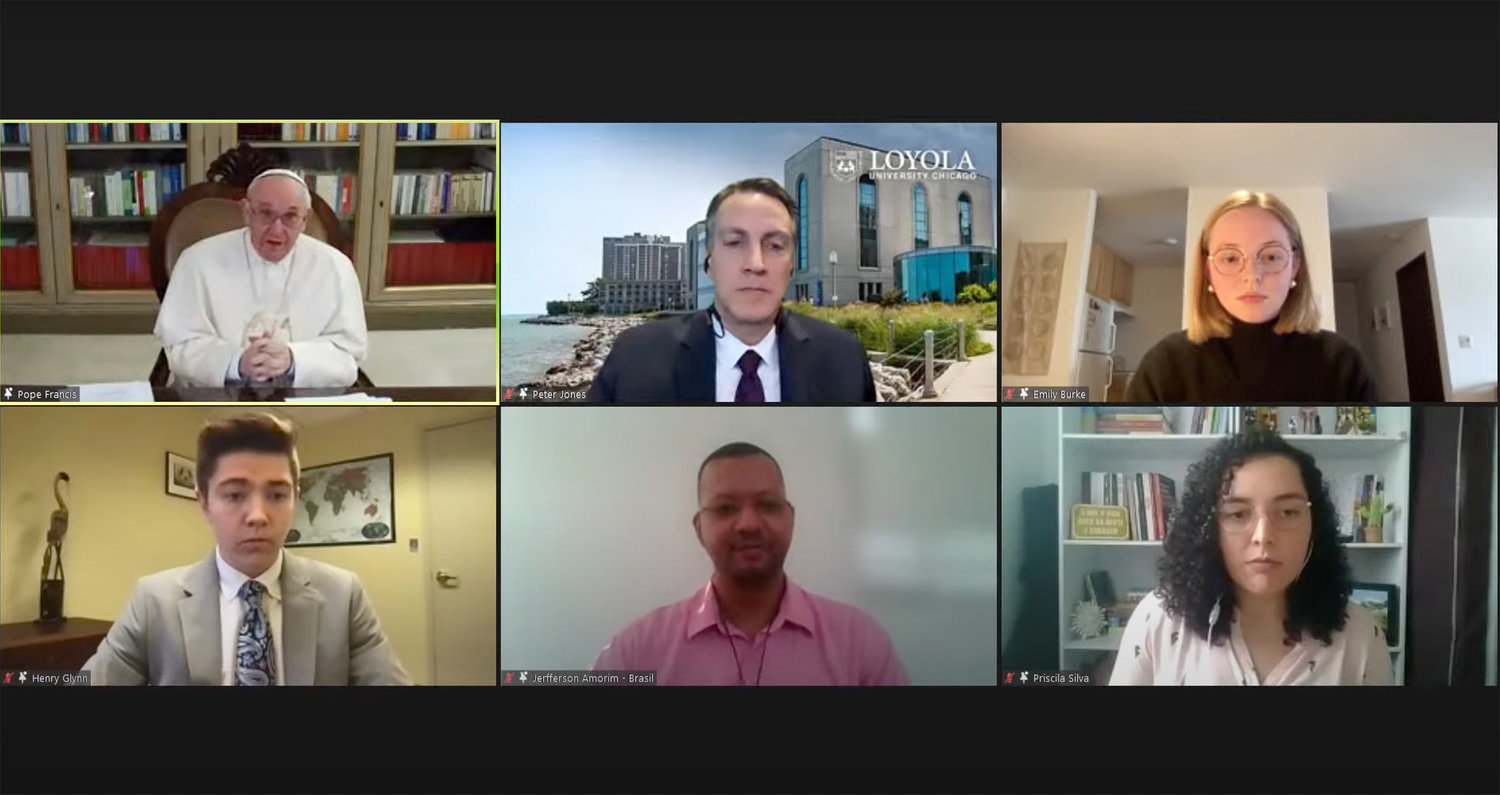 Loyola University Chicago hosted a online videoconference this past week that included Pope Francis and hand-picked college students from across the country. Peter Jones, top center, was one of those who participated. A member of Loyola’ Institute of Pastoral Studies, Jones teaches adults professional ministry, spiritual development, and faith-based leadership inside other professions.
Courtesy of Loyola University Chicago 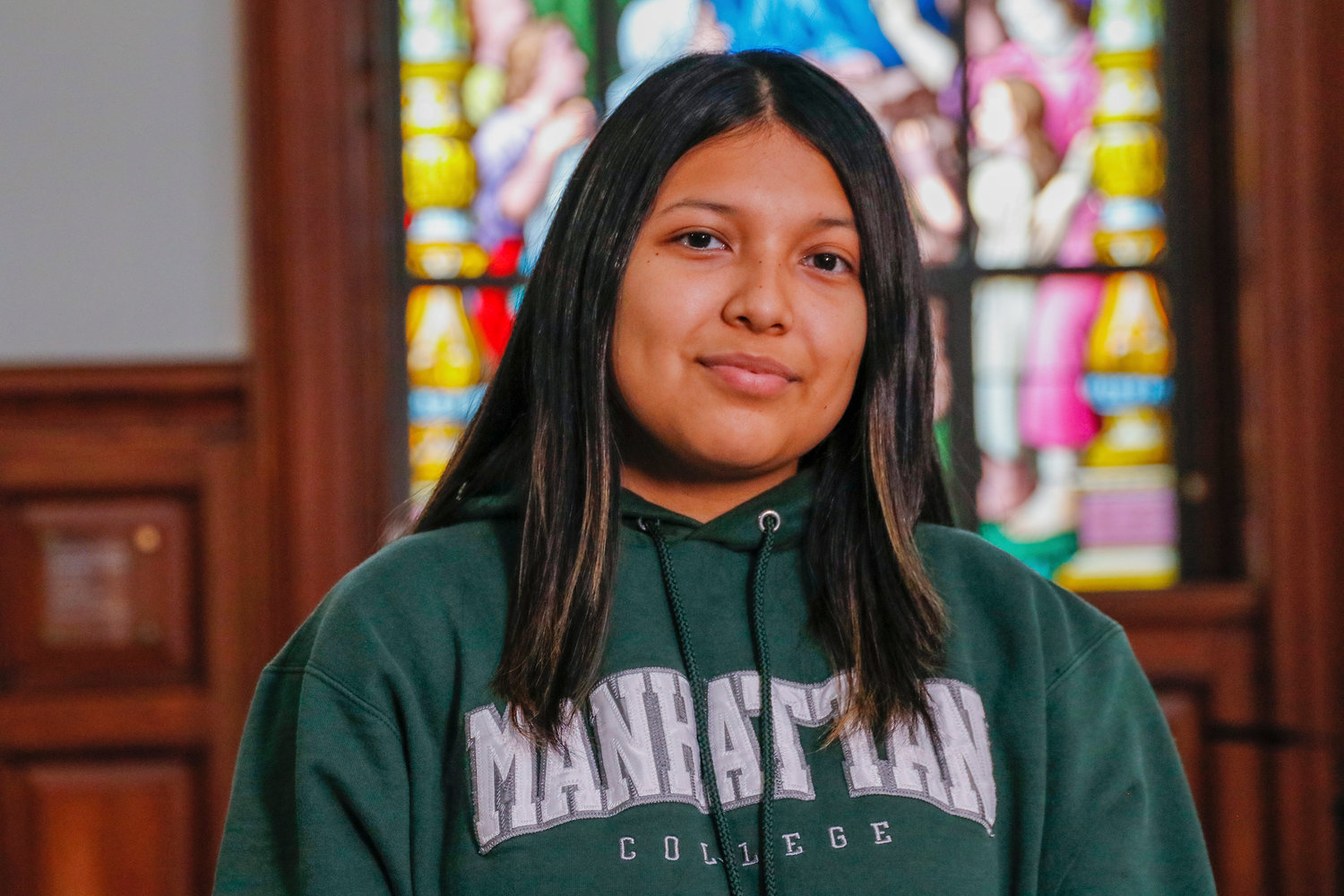 Doriz Yari a biology major at Manhattan College, was one of a small group of college students given a chance to join a video conference with Pope Francis this past week. Although the conference itself didn’t quite work out as organizers had hoped.
Courtesy of Manhattan College
Previous Next
By STACY DRIKS

Rebecca Kranich needed to rub the sleep out of her eyes. Or this was an elaborate piece of spam.

Yet, there it was, listed among the other subject lines in her email inbox, asking if she would like to have a “conversation with the pope?”

But it was indeed quite real. A communications and political science major, Kranich and another Manhattan College student, Doriz Yari, were invited to sit down with others liked them from around the globe and actually have a conversation with the spiritual leader of a billion-member worldwide organization.

Loyola University Chicago — one of the largest Catholic universities in the United States — invited 130 students from nearly 60 universities and more than 20 countries to join in a virtual conference with Pope Francis.

The meeting itself was separated into seven regions — with Manhattan College joining other institutions from the eastern part of the United States.

But as Kranich and Yari prepared for their big day, they got bad news: Too many students had been invited, and so some were not going to make the cut. Who could stay and who could go was left to those asked to sign in, with each region picking 10 to represent them in the online vide conference.

Both Manhattan College students made the cut, but they didn’t celebrate long. By that Wednesday afternoon, more cuts were needed, bringing the total list down to 16 from all the regions. The luck for both Kranich and Yari, unfortunately, had run out.

Instead, it was Eric Brazil and Ana Ruiz from the University of Georgetown representing this part of the country.

The last-minute changes hit Kranich hard. She had been preparing for this rare chance to converse with the pontiff since January. And then, just like that, it was gone.

“Doriz and I were sitting there wondering what was happening,” Kranich said. “I was confused.”

It wasn’t all gloom for those who missed out. They still had a chance for a photo op with the pope — even if it was a virtual one. They had a chance to click into an online video room, say their hellos, and snap a quick picture “with” the pope.

“I think some of the students who thought they’d be in the Zoom room, their feelings might have been hurt,” said Michael Murphy, director for Loyola Hank Center for the Catholic Intellectual Heritage in Chicago.

He had personally pushed to get more students involved, but ultimately wasn’t successful. Murphy had hoped the more faces the pope saw, the more excited Francis would be to speak with them.

Sure, Kranich had hoped for more, but she says she was still happy to be a part of it. And she wouldn’t even have had a chance if it wasn’t for the recommendation she received from Kevin Ahern, a religious studies professor at her Fieldson-area school.

The whole exercise was about “synodality,” Ahern said, an old form of decision-making, used primarily by bishops during the Catholic church’s first thousand years.

Those decisions were typically made after extensive conversations and finding ways to come to a consensus among the bishops, Ahern said — not the more democratically rooted decision-making processes of today.

Kranich “should be able to listen and articulate an opinion,” the professor said. “And I think that’s the type of skill sets that are needed for this type of synodality.”

The word, by the way, has roots in the phrase “walking together.”

“It really is one of the first things that Jesus did,” Murphy said. “People just started walking with him.”

Pope Francis, he added, “wants to walk with everybody.”

The hopes were that a meeting like the one these students were invited to could help ultimately change the inner workings of the Catholic church, and maybe even open the door to the modern world. The pope believed he could get closer to that goal by listening to many of the experiences of these students.

As each spoke, Francis jotted down notes, something that simply astonished Murphy. Here was a college student sitting in their dorm room sharing their experiences on their computer, and on the next screen, Pope Francis listening, and scribbling down everything they’re saying.

Kranich didn’t get a chance to speak, but she was happy her region brought up immigration with the pope — especially because of her personal experiences. Kranich was born in China, but adopted by an American family while still an infant. Still, even as early as she could remember, immersing herself in American culture was hard.

“I couldn’t even fathom coming here young adult, an adult, or even someone who is older,” Kranich said, “Imposter syndrome, suffering a lot of the mental toll that it takes leaving a culture and having to adjust to a new one.”

Understanding culture shock was one of the things Kranich wanted to focus on in the pope project as a way to make it unique.

Hate exists in many places, unfortunately — even within the Catholic community. Looking different was difficult enough. But being Asian in the midst of a pandemic that had its roots in a place like China made it all the harder.

Kranich’s parents still worry about her when she’s alone on the subway. They’ve even warned her that when she waits for a train, she needs to keep her back pushed up against a pillar.

Many sought to revolutionize the Catholic church in the 1960s, to help it keep pace with a world that was also rapidly modernizing. Kranichs parents grew up in the ‘70s with a more liberal social justice understanding of Catholicism. They witnessed changes and controversies — not too different from Murphy’s own experience.

“I don’t want to be delusional about it, you know? But there’s something in the air.”

Jimenez 'dons the stole' at Scranton