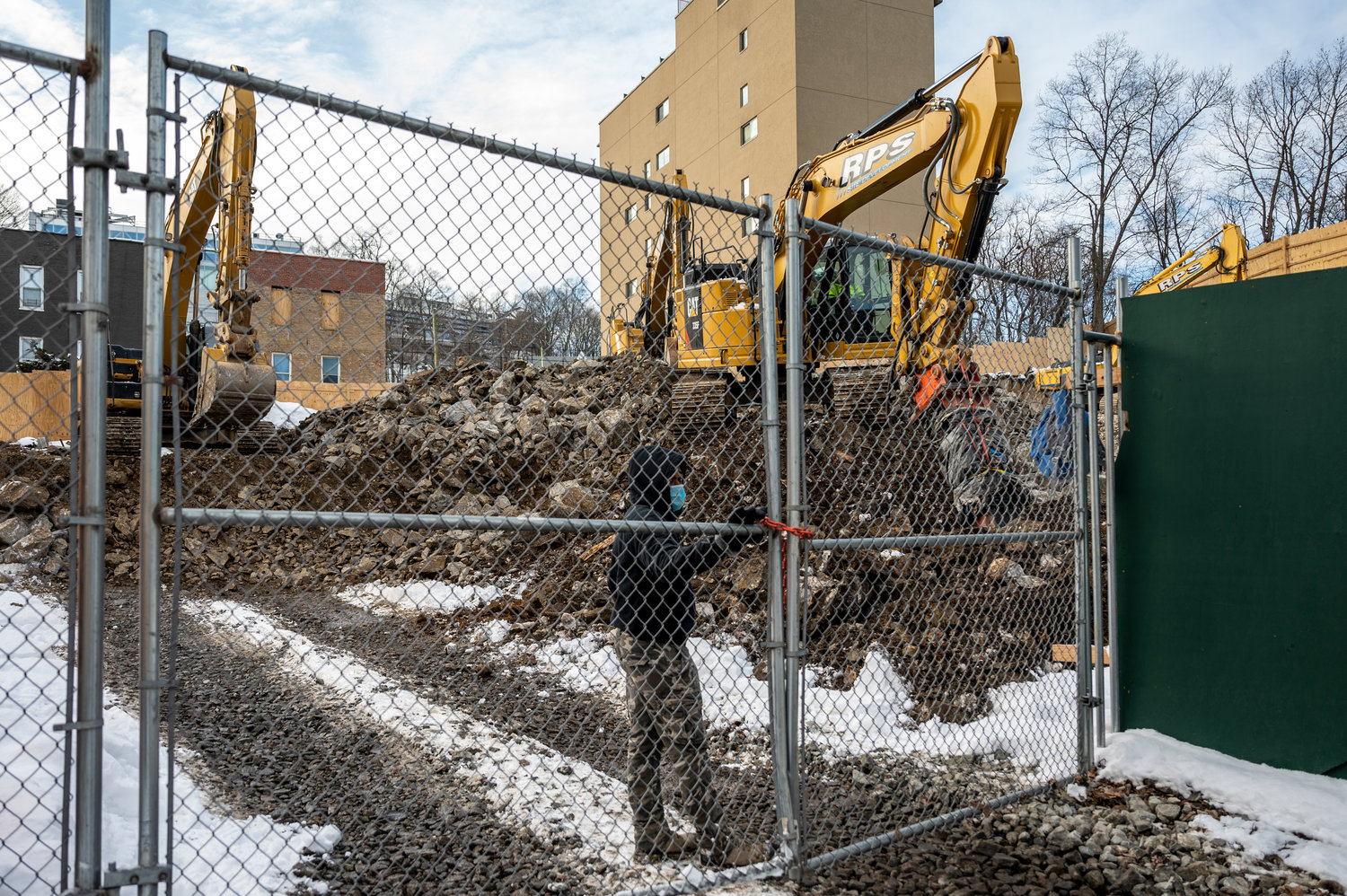 Rock chipping is expected to continue for some weeks at 5278 Post Road, where Stagg Group is erecting a seven-story residential building. Yet, for the most part, neighbors have offered few complaints.
HIRAM ALEJANDRO DURÁN 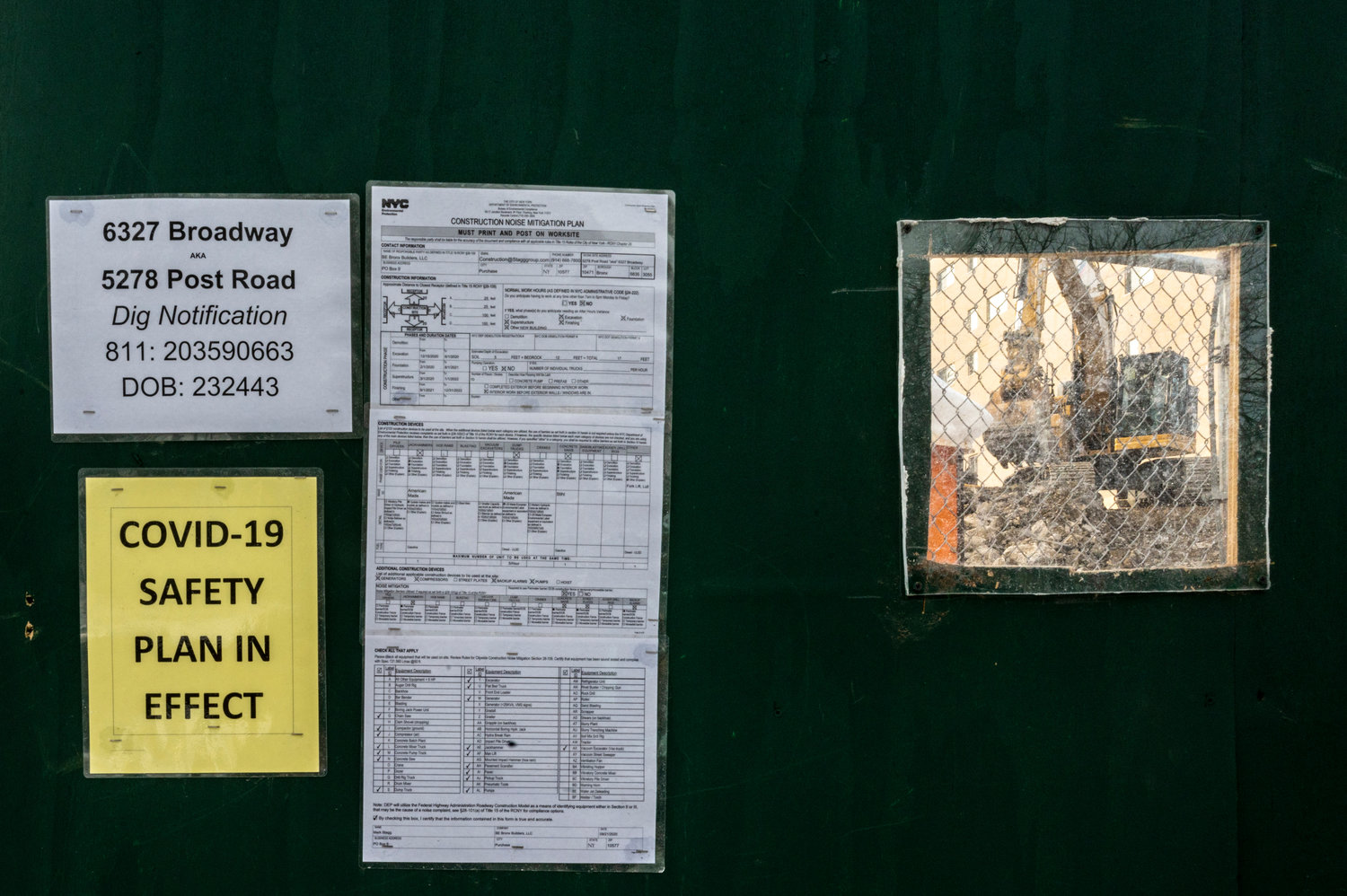 An excavator can be seen through the green construction walls along 5278 Post Road, where Stagg Group is constructing a new seven-story residential building that will stretch east to Broadway, near where it meets the Henry Hudson Parkway.
HIRAM ALEJANDRO DURÃN
Previous Next
Construction site
5278 Post Road
Bronx, NY 10471
View larger map
By MICHAEL HINMAN

There’s a lot of history along Post Road — from visits by iconic generals to its significance in keeping early New York connected with the rest of the country.

So it might be easy then to almost dismiss the rock excavation at 5278 Post Road almost as an archeological dig. But it’s not. Instead, Stagg Group is building a seven-story residential building on the site, and all that rock is just in the way.

“We have to level off the rock,” Jay Martino, Stagg’s senior construction vice president, told Community Board 8’s land use committee at a recent meeting. “We have to sort of take the top of that knob off to get to a point to see what’s going to come next.”

The rock chipping has been the source of some complaints by neighbors — but more because of claims it was being done off-hours, rather than a normal working day. And the geography on this part of Post Road, not far from where Broadway meets the Henry Hudson Parkway, is much different from Fort Independence Street near Kingsbridge Heights, where construction work a few years ago ricocheted loud jackhammering sounds all throughout the neighborhood.

So far, however, the Post Road rock chipping is wrapping up faster than expected.

“There are a lot of fissures in the rock,” Martino said. “The rock is breaking very easily right now. I don’t want to say something that may come back and bite me later on, but the rock is moving rapidly. We just know from our Fort Independence days that the rock formations at the surface vary from what we’re going to find 20 to 30 feet below grade as the rock hardens.”

Unlike significant rock formations up the hill toward the Hudson River, there are no laws on the books that would prevent any developer from removing rock from a construction site, according to land use chair Charles Moerdler.

“This is not part of a special natural area, and therefore, rock removal is not necessarily protected,” Moerdler said. “Unless there are other circumstances, such as jeopardy to adjacent buildings and the like.”

Stagg has insurance just in case any neighboring buildings are indeed impacted by the excavation work. But the development company has gone even further than that.

“We have seismic monitors and optical monitors on the adjacent buildings,” Martino said. “We’ve also done pre-construction surveys. But everything is monitored, and reports go directly to our engineer on a regular basis.”

This particular lot has been targeted for development for a number of years. Originally, a pair of developers — Petra Broadway and Destem Realty — had plans to construct a nine-story building on the site, and was hoping the existence of the rock there would earn them some sympathy from the city’s standards and appeals board to earn them a variance.

Board executive director Carlo Constanza — with the backing of a Moerdler-led community board — said no.

Petra and Destem then sold the property to a limited liability corporation controlled by Stagg for $7.9 million. Soon after, Stagg unveiled plans to build a seven-story structure on the site — well within what the property was zoned for. The as-of-right construction meant less red tape, and work began just a few months later.

Most of the complaints now seem to be centered around rock debris. Not the large chunks Stagg is hauling away on a regular basis, but instead particles small enough to float in the air.

“We have a lot of dust debris, like fine particles, that seems it’s all over our cars, and all over our backyard,” neighbor Scott Brewster said. “We’ve been having more allergy impact lately than normal. So my concern is that there is fine debris from this rock removal that is impacting our health and other things around us.”

By the time the land use committee met this month, snow had started to fall, so the rock dust hasn’t been much of an issue, Brewster said. But with chipping expected to carry on for some weeks — it’s possible it could be in the air once again.

The best way to solve that, Martino said, would be to spray down the dust with water when the air is drier.

“We’ll get that going,” he said. “I need to pull the hydrant permit so that we can use water from the hydrant. But we’ll pull that starting tomorrow. We’ll apply for that, and we’ll get it going immediately.”

Stagg also has erected some additional netting on top of the sidewalk shed along Broadway at the back of the property, which should allow the company to remove rock closer to the sidewalk.

“I’m not concerned of the danger. We’ve done this many, many times before, most recently in your community board at Fort Independence,” Martino said. “We think that we have taken the necessary precautions.”

In the meantime, Martino is encouraging any neighbors with issues about ongoing construction to reach out to Stagg directly, by emailing info@5278ptrd.com. The community board, however, still encourages problems to be reported to both 311, and to the board itself at (718) 884-7895.