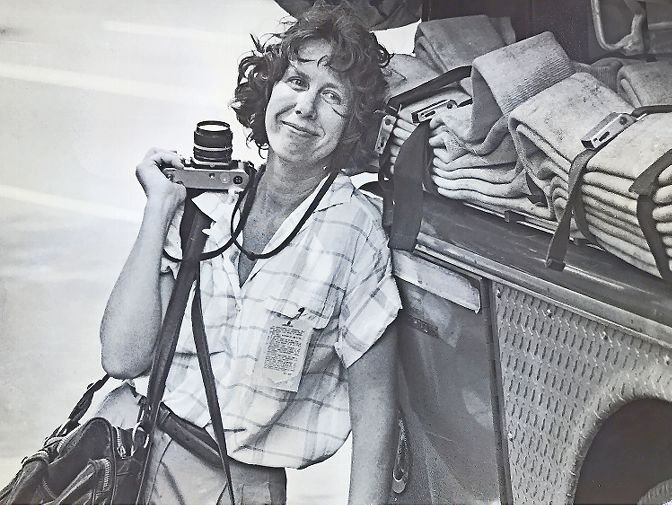 Gretchen McHugh’s photography work graced the pages of The Riverdale Press through the late 1980s and early 1990s. She moved upstate to Granville in 1993, and died Aug. 20 at 78.
JOHN VAN HORNE / File
STAFF REPORT

When the former Broadway offices of The Riverdale Press were firebombed in the early morning hours of Feb. 28, 1989, Gretchen McHugh — the newspaper’s chief photographer — was one of the first people on the scene. Her images that morning detailing firefighters’ work to put out the flames that ultimately gutted the newsroom would be republished again and again over the 30-plus years since the attack.

At the time, McHugh already was a published author, her “Hungry Hiker’s Book of Good Cooking” a staple for many venturing out on trails and journeys through nature. And she always loved the outdoors — a passion that pulled her out of New York City in the early 1990s and into the very rural escape of upstate.

At The Press, McHugh was not only the paper’s photographer, but was also a reporter and editor of the paper’s Lifestyle section, according to an obituary published in the Granville Sentinel. She was honored by the New York Press Association in 1989 as its photographer of the year, and also won for best feature story that same year.

When not at the newspaper, she taught English literature at Bronx Community College, or could be found sailing the Hudson River through Pete Seeger’s Clearwater Foundation. Many of her photos of life on the Hudson were featured in a 2004 exhibition in Glens Falls.

McHugh moved into a 200-year-old farmhouse in Granville — a village of about 6,700 people along New York’s border with Vermont — in 1993. She restored the house and farm, according to the Sentinel, and became active with tree farming groups. McHugh continued teaching, this time at what is now SUNY Adirondack in Queensbury, while also teaching piano lessons privately.

Born as Gretchen Ann Ruhl in Michigan, she learned to play piano while still quite young, eventually attending the Interlochen Center for the Arts and Aspen Music Festival and School in Colorado.

She is a 1963 graduate of Wellesley College in Massachusetts, and earned her master’s from the University of Michigan.

The family has asked for donations to be made in her memory to The Hudson River Sloop Clearwater, 724 Wolcott Ave., Beacon, N.Y., 12508.