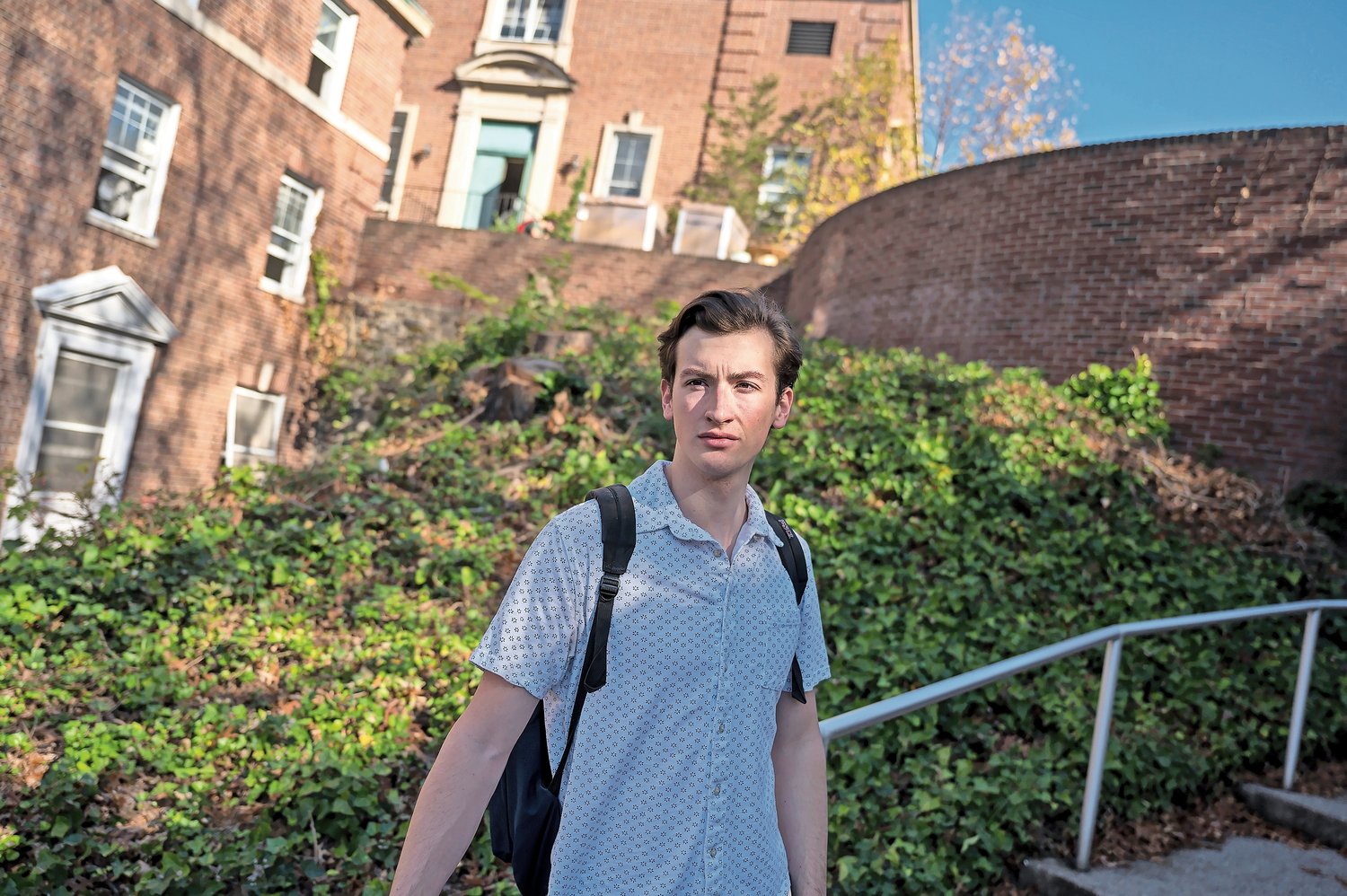 Michael Falco, a senior at Manhattan College, is inspired by the works of "The Strain" co-author Chuck Hogan, who spoke recently at the school.
Hiram Alejandro Durán 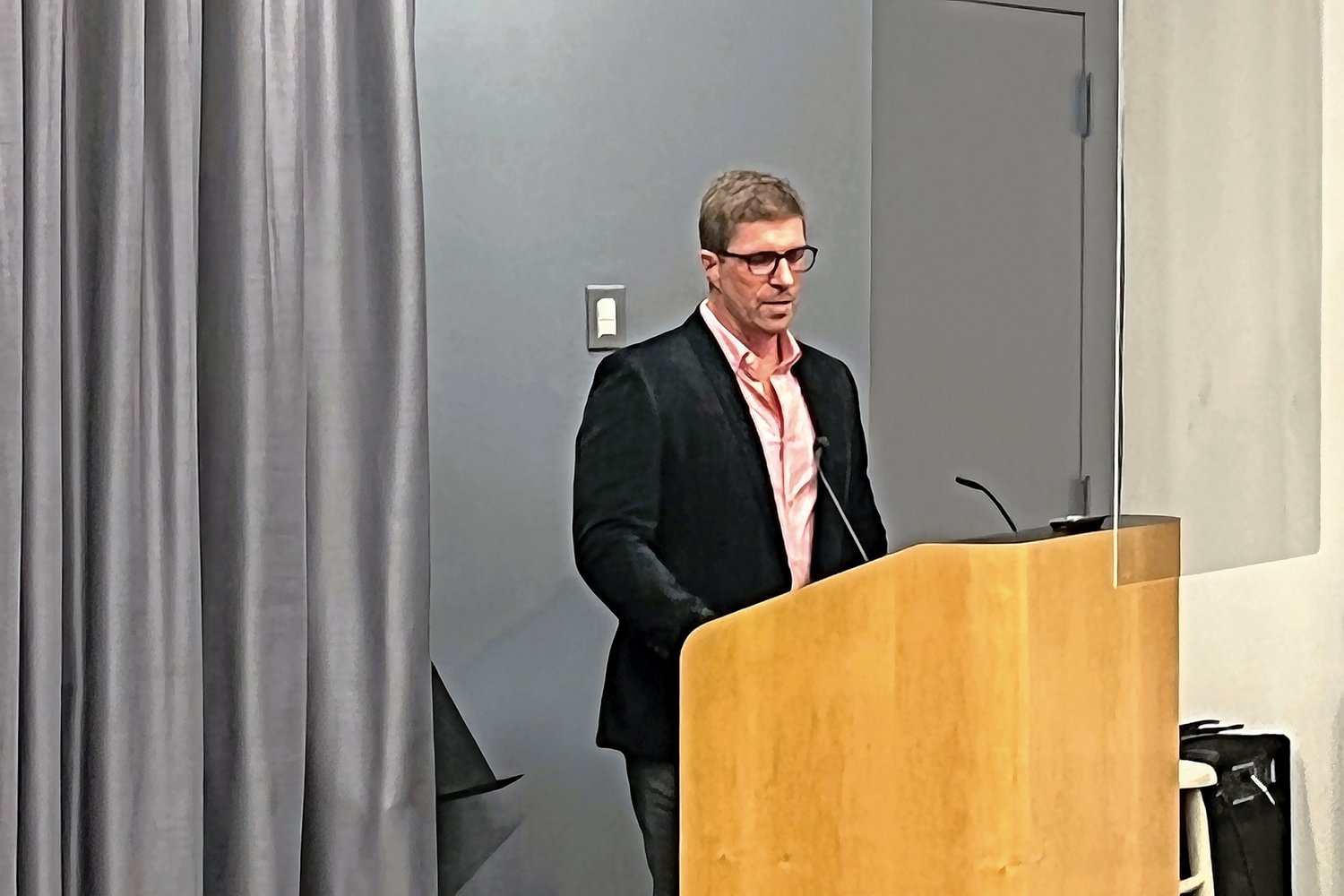 Manhattan College’s annual reading series returned on Oct. 13 with one of the co-authors of The New York Times bestselling novel ‘The Strain’ Chuck Hogan doing a reading.
Courtesy of Manhattan College
Previous Next

It almost seemed like running 10 marathons. Who could sit down for a year or three to write books?”
CHUCK HOGAN, author
By Stacy Driks

Manhattan College student Michael Falco is pursuing a career in film or novel writing. So meeting Chuck Hogan was right up his alley.

Hogan, a novelist, television producer, and screenwriter, was a special guest at the school for an ongoing major author reading series known as MARS.

“Seeing someone else who actually made it makes it a little more real,” said Falco, who is graduating in May.

Insight from a professional writer who won the Hammett Prize for literary excellence in crime writing and New York Times bestseller was enlightening for Falco.

That’s been the college’s goal since it launched MARS in 2010. It is the brainchild of David Eye, a visiting assistant professor of English, and Adam Koehler, chair of the English department.

It offers students and the community the opportunity to learn and benefit from writers, playwrights, screenwriters, and other mediums.

At the event Hogan read his vampire horror novel, “The Strain.” He co-wrote the book with Guillermo del Toro, a renowned thriller movie director who could not make it to the event. The book centers around a battle between man and vampire threatening humanity. It is the first installment of a trilogy.

Growing up, he never thought he would write novels.

“It almost seemed like running 10 marathons,” he said. “Who could sit down for a year or three years to write books?”

However, Hogan said he only wanted to tell stories, which is a creative way to write fiction.

“Oh, I’m a lifelong horror fan — I was a huge Stephen King fan since elementary school,” the future writer said.

Hogan is also a King fan and was heavily influenced by him. “The Strain” writer said King made a monumental impression on him. King is famously known for his supernatural, horror and science-fiction novels.

“The Shining,” starring Jack Nicholson, was based on King’s novel of the same name in 1977. Another film adaptation is the child-killing clown “It.”

“When I was growing up in the 20th century, when a horror movie was released with a rating like that — something that was gory or disgusting, I’m getting in there illegally,” Hogan said, which stirred up a laugh.

When he was younger, Hogan was always interested in horror and gory films of the 1980s. He was interested in them so much that he snuck into the theater a few times.

Falco admitted he did the same.

Maeve Adams, an English professor who oversaw the event, is one of two people who work on their social media strategies. Her responsibility was to live stream MARS on the social media platform Instagram.

She waved virtually with an emoji to the people who attended the live stream before she ended it.

“It was fascinating because the novel is about the pandemic — or epidemic, I guess because it’s written before COVID-19, and even though it necessarily isn’t about that, it’s about a city coming together, and we had just been through something very similar,” she said.

The part of the chapter/section he read was about an eclipse that happened shortly after the epidemic began. This excerpt Hogan read was not necessarily connected to the story of the disease of vampirism that was spreading as described in the book. Yet, it was filled with fear, curiosity, and hope.

The eclipse is actually one of the crucial developments to the plot. In the series, the skies above New York City grow completely dark covering the sky. The notable city lights go black as well.

Characters within the novel can only wait for something to happen.

The English professor has yet to read the book herself, yet she showed three episodes of the adapted television series to her class.

A part of her curriculum she teaches a unit based on vampires — not Count Dracula — and since the novel is closely related to the unit, her class attended the book reading.

“This was actually my first book reading,” Falco said.

While Falco didn’t know what to expect when he arrived to the event, he considered it a once-in-a-lifetime event as a student of film and writing.

“You know, insight into an actual writer and someone working in film into their kind of day-to-day where their projects come from was really enlightening,” Falco said.