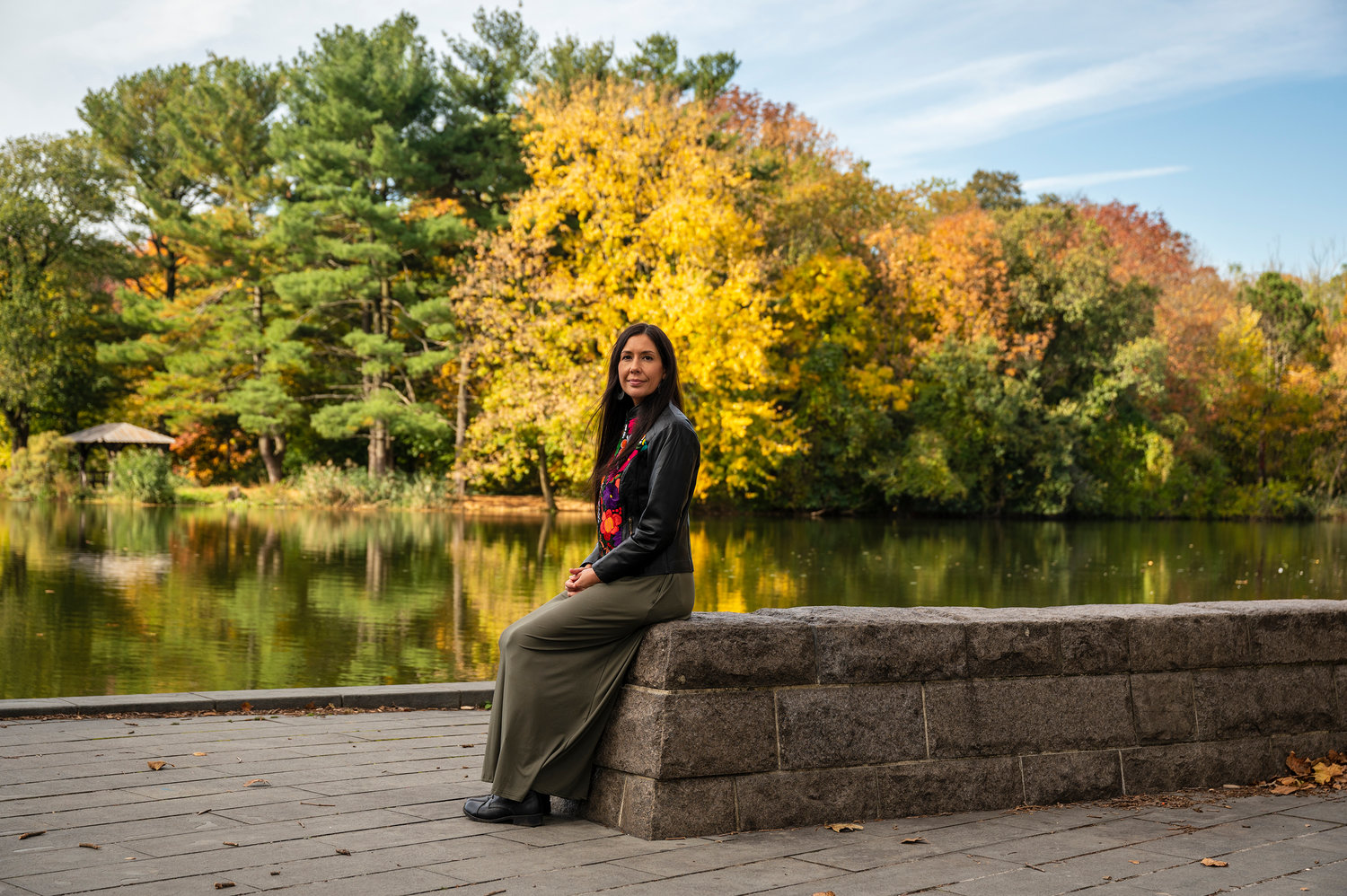 By day, Melissa Castillo Planas teaches English at Lehman College. But when she’s not spending time with her students — and she spends a lot of it with them — she’s publishing books of poetry. That includes her latest, ‘Chingona Rules,’ which was released back in September.
HIRAM ALEJANDRO DURÁN 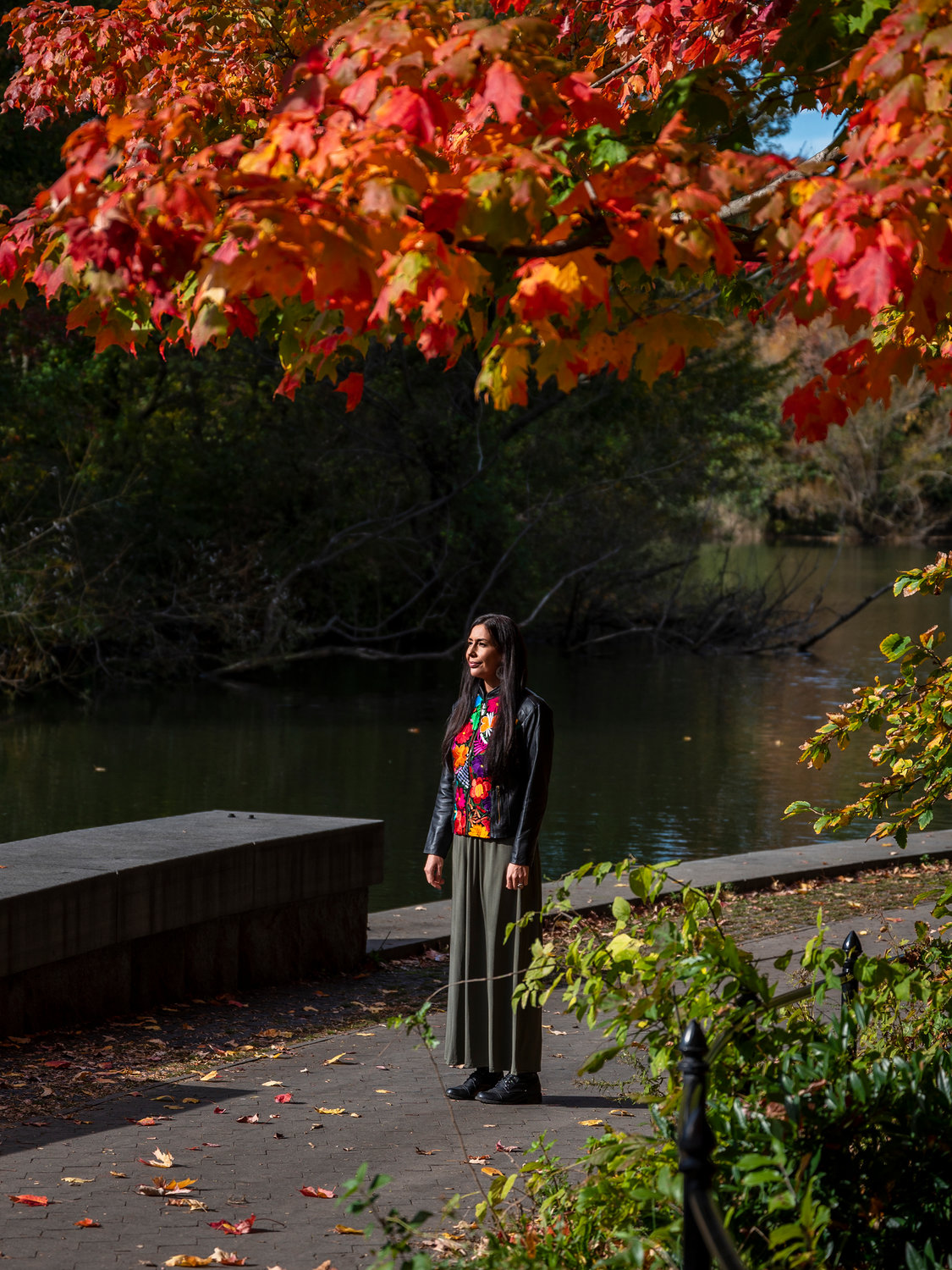 By day, Melissa Castillo Planas teaches English at Lehman College. But when she’s not spending time with her students — and she spends a lot of it with them — she’s publishing books of poetry. That includes her latest, ‘Chingona Rules,’ which was released back in September.
HIRAM ALEJANDRO DURÁN
By SARAH BELLE LIN

Words have power. But over whom?

That life-saving prose has now moved into her second book, “Chingona Rules,” allowing Castillo Planas to safely say she’s now in a better place. That means she doesn’t need to spend as much time on herself as she would on other people, as well as social and historical issues that interest her.

“I think this book is about controlling what you can control,” Castillo Planas said. “I learned where I would like to take my poetry in the future, which is that I might write less about myself. You can get to a certain place, a comfort in boldness and pride in yourself. But you still have to work at it.”

“Chingona Rules” is a “memoir-esque” book of poetry organized into 10 parts with thematic elements on family, Latina/Chicana identity, social commentary, mental health, love and heartbreak, and a whole section on artist Beyonce, “obviously, as all books should,” Castillo Planas said at a recent reading event with Lehman colleague and author Matt Caprioli.

In “My Body is a Scar” Castillo Planas thinks of “the spectacle of spectacular violence we are witnessing in our streets, Black deaths as painful as they are public, child murder as tragic as it is preventable, children stacked like fruit baskets, like Legos, a border turned containment.”

Having suffered from post-traumatic stress disorder, Castillo Planas reflects on the pursuit of happiness in “PTSD.” “Can you learn happiness when you can’t remember what it tastes like, when everything tastes like the bitter seed of the world’s nastiest fruit?”

It took months to write the final poem, “Chingona Rules” — of which the book’s name derives. Who are the rules written for? “I envision other younger Latinas,” Castillo Planas said. “Not that you have to be Latina to be chingona. Anyone can be chingona.”

Castillo Planas honors the long lineage of “hysterical, wild, stubborn, difficult women” she’s descended from. In “Mother Tongue,” she writes about her native language, “a memory I long to remember. My mother tongue is also my secret weapon; hidden and dulled from misuse, waiting to be sharpened.”

While the deep pride of her heritage takes center stage in her methodology, Castillo Planas says there’s shame and humiliation in coming to terms with her cultural identity, too. She admitted never throwing a quinceañera — the Latina version of a Sweet 16 celebration— because she was “too embarrassed to dance my culture” and “afraid to be different, public, proud.”

“Chingona Rules” instead has a lot to do with self-empowerment and being comfortable with the past to have a healthy present.

“Some of it was ‘un-doing’ my own feelings about things that you shouldn’t talk about,” Castillo Planas says, particularly “internal beliefs of being lesser. Being able to put it on paper and publish it is like, ‘Here it is. I don’t care what you think.’”

She credits the earrings — they read “chingona” in large letters — her cousin gifted her as a conduit to self-confidence.

Still, Castillo Planas isn’t fully comfortable with baring her heart and soul for the public to consume. But she takes some comfort in knowing recent movements around mental health and sexual abuse awareness have perhaps changed society for the better. She’s suffered from childhood trauma, eating disorders and abusive relationships.

“Some of those things I put in lockdown for 10 to 15 years, and didn’t acknowledge that it happened for a long time or talk to anybody about it for years,” Castillo Planas said. “I don’t actually like reading the mental health section, but a lot of people have found connections to them.”

There are still childhood memories she’s blocked out, although she can recall her literary career beginning when she was a “little fiction reader” making books.

As the Ithaca-raised writer grew, Castillo Planas “tried fiction, journalism, and then fiction again. And then I found poetry.”

From hundreds of poems, she organized 40 of them into “Chingona Rules.”  She recalled how half of the pile were poems Castillo Planas didn’t think she were ready, believing that “the poem isn’t complete until you’re able to dive deeper and do the work.”

Her first poetry book, “Coatlicue Eats the Apple” was a Mexico-takes-Big Apple that integrated her time spent in the halls of Ivy Leagues to the gritty streets of East Harlem, and back again. The title pays homage to Coatlicue, a goddess steeped in Mexican mythology who is androgynous — half-male/half-female — and simultaneously a creator and destroyer.

Humbly, Castillo Planas named some of her past and present students in the book’s acknowledgements. Known as “Dr. CP,” Castillo Planas is now in her fourth year teaching at Lehman, specializing in Latinx literature.

“They’ve seen me perform poetry,” she said of her students. “They were early readers (of ‘Chingona Rules’). Me and some of the students formed a poetry support chat group where we sent poems every day, and some of those poems ended up being in the book.”

Castillo Planas’ coursework, though, spans much larger across surveys of Latino literature, contemporary Latina writers, American literature, the Mexican experience in New York, composition, and immigration. As it stands, Lehman’s student population is around 55 percent Latinx.

Some of the most exciting contemporary poets Castillo Planas has taught in her class include Natalie Diaz, a Pulitzer Prize-winning Indigenous poet, as well as Elizabeth Acevedo, who writes in verse a lot, and José Olivarez, to find some humor.

“I tend to pick contemporary poets of color for a couple of reasons — the poets I pick are stunning, so that’s number one,” Castillo Planas said. “A lot of my students tend to have not been taught poetry by poets of color. It limits how well I think they can tell their stories. It’s not like they can’t learn anything about Keats or Edgar Allan Poe, but they also need some other models from more diverse backgrounds.”

Helping students with poetry has helped Castillo Planas reflect on her own work — a process at once engaging and cathartic.

“Writing them down was like letting them go,” she said. “Poetry is like therapy for me. I always tell my students to write in active voice — be an active participant.

“Language is so powerful.”