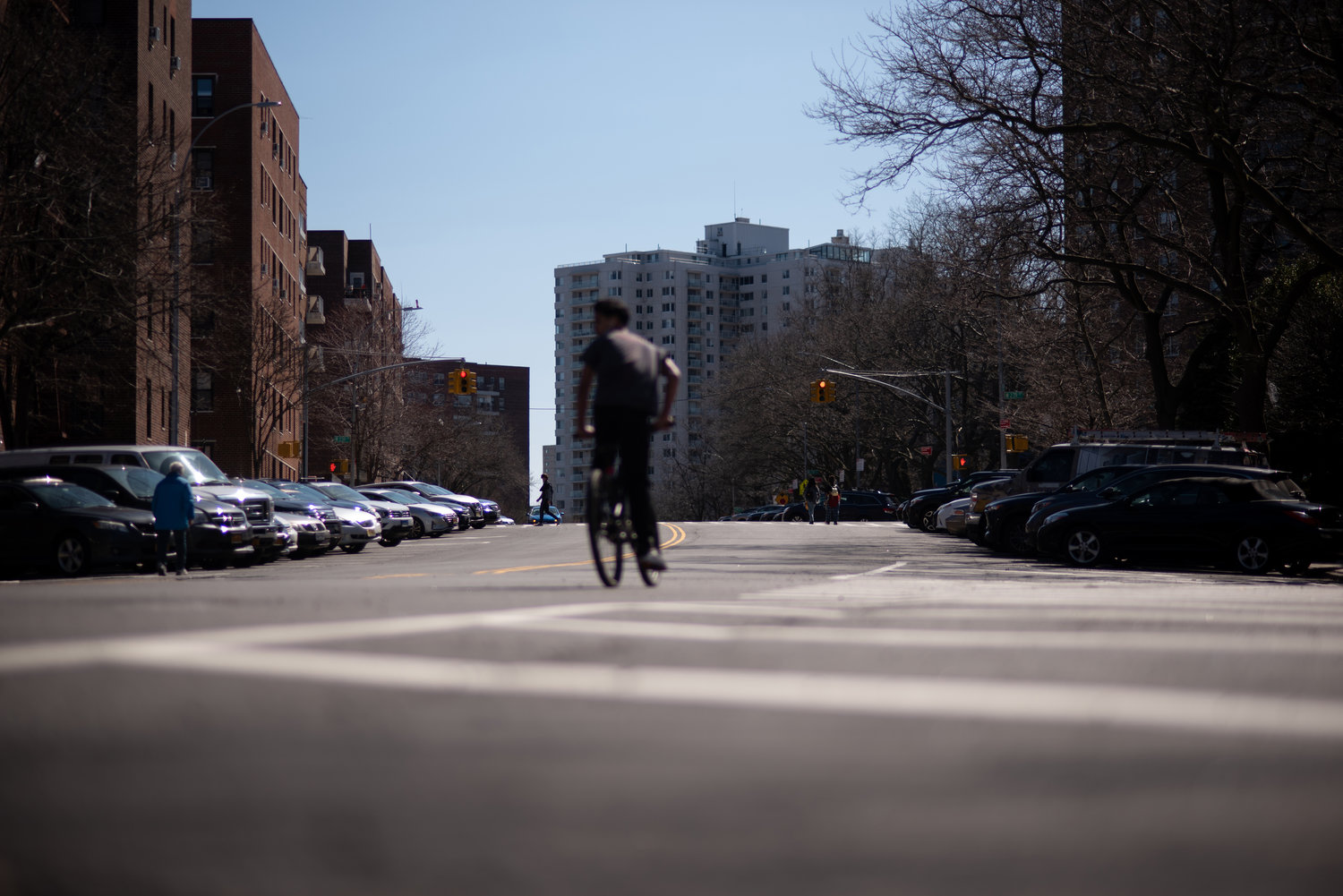 It seems bicycle lanes aren’t on the table anymore as part of a package of recommended changes to Independence Avenue in an effort to curb speeding traffic. Community Board 8’s traffic and transportation committee decided to remove many of the proposed flexible delineators from their list of suggestions as well after they, too, proved less than popular.
SKYLER REID 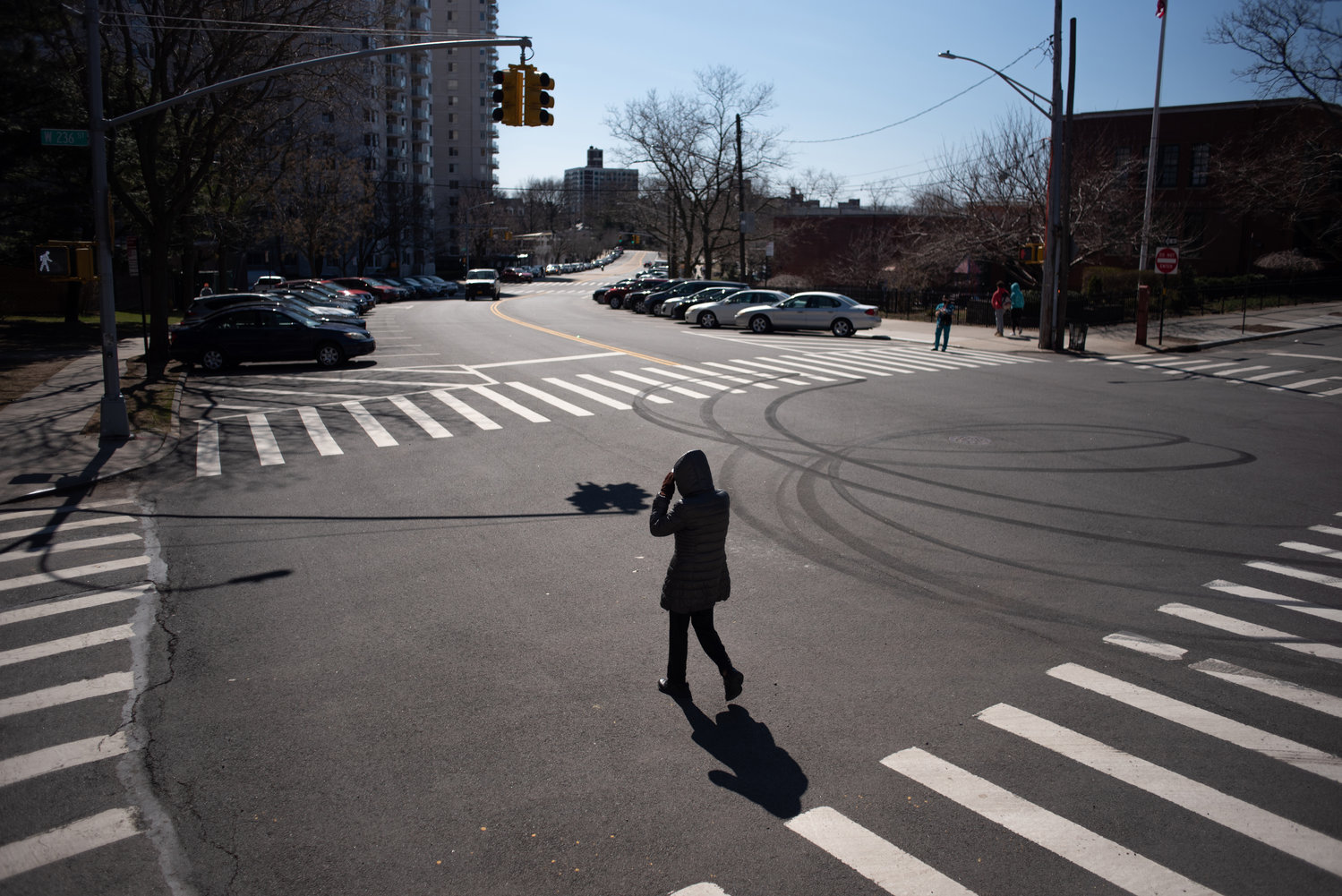 Independence Avenue has been the site of reckless driving complaints over the past several months. Yet, government response has been slow, especially from Community Board 8’s traffic and transportation committee, which had to revisit the problem once again after anonymous flyers were posted along the street claiming changes were coming that weren’t actually planned, or finalized.
SKYLER REID 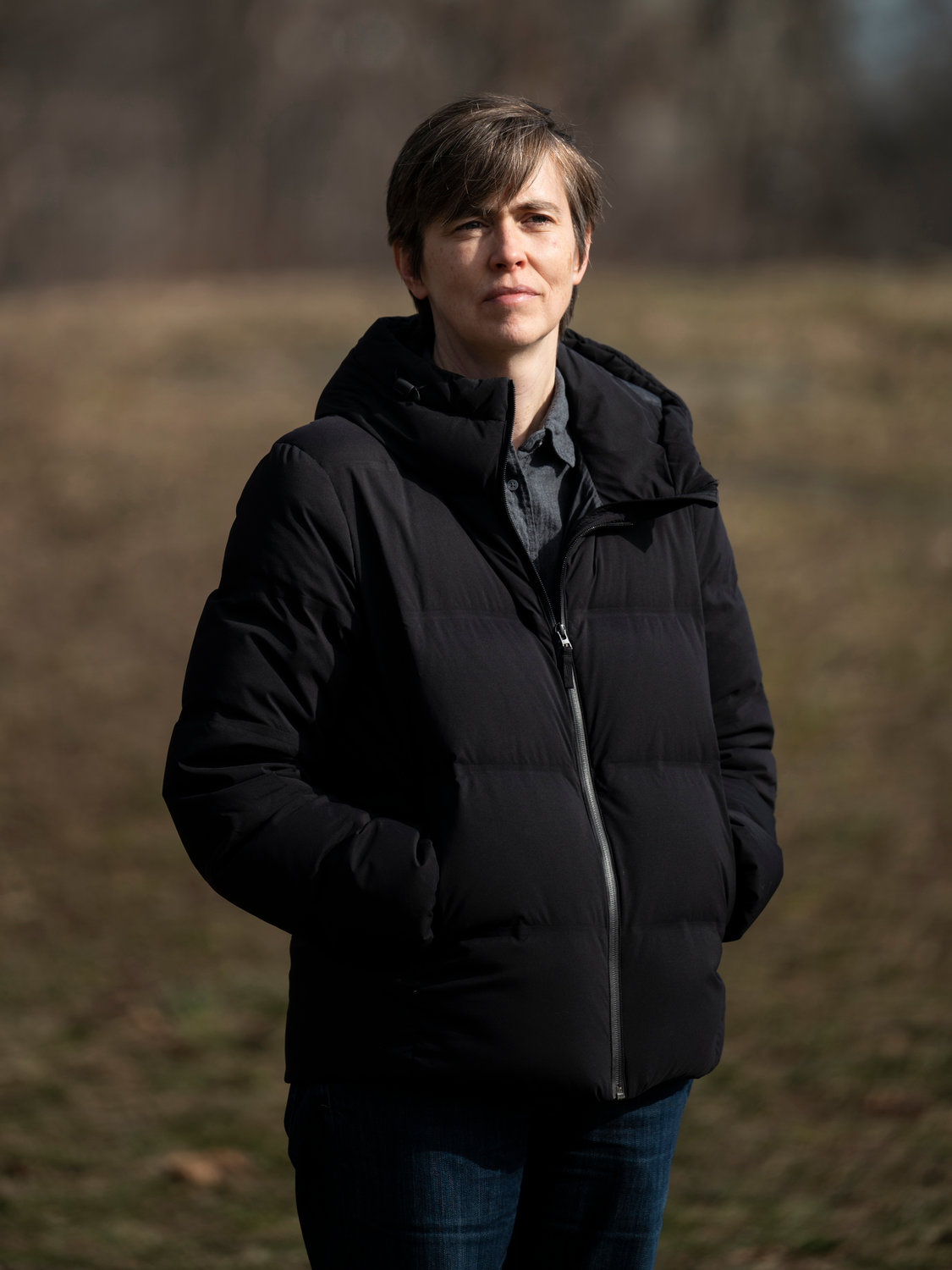 Deb Travis led a Community Board 8 working group tasked with drafting potential design changes to Independence Avenue that has proven to be reckless driving hotspots. But the endeavor has been slow-going since her group’s initial presentation to CB8’s traffic and transportation committee last December.
HIRAM ALEJANDRO DURÃN/ File 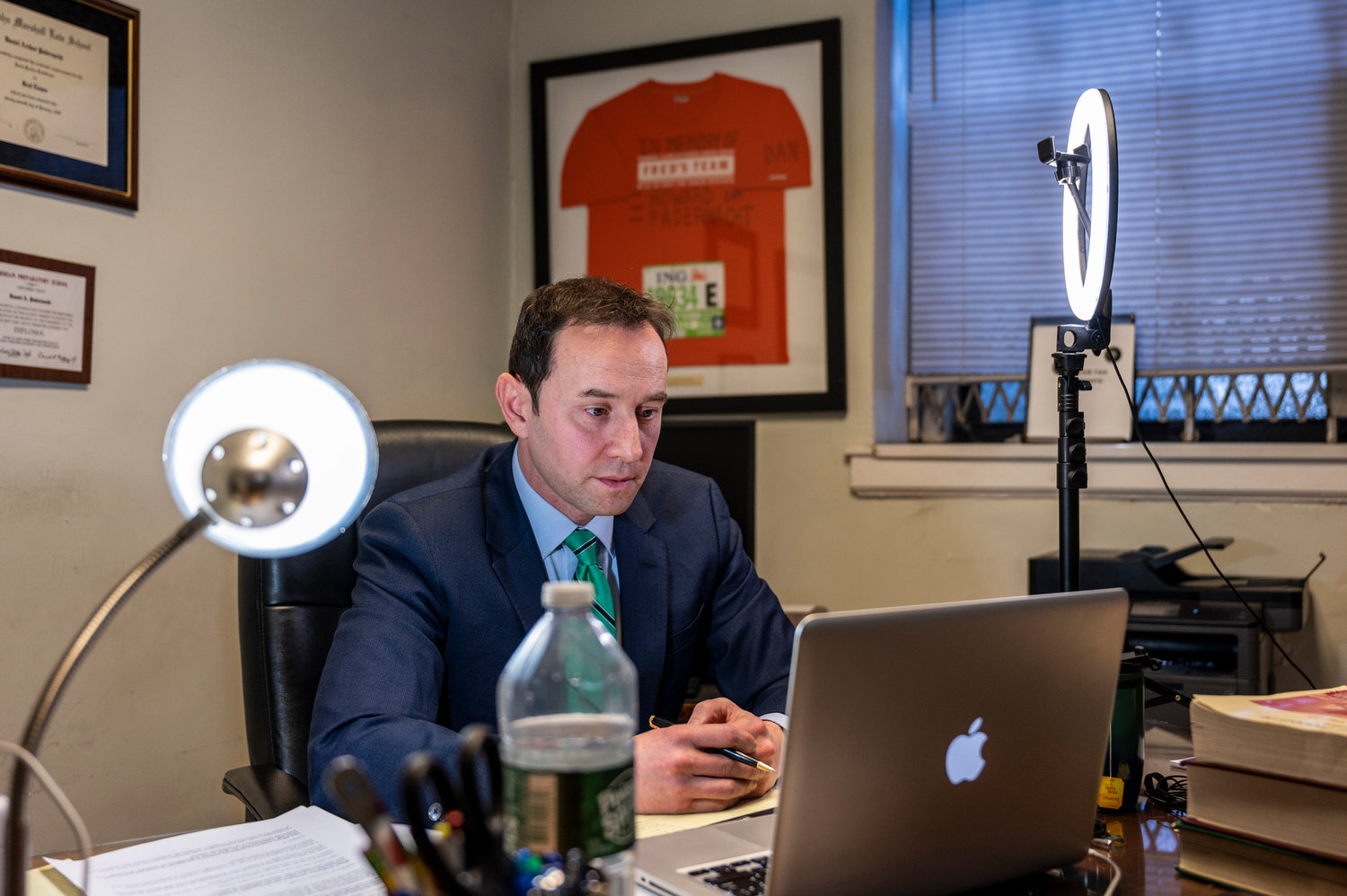 Dan Padernacht, who chairs Community Board 8’s traffic and transportation committee, once again listened to neighbors share opinions about a list of suggested changes a working group proposed to curb speeding on Independence Avenue. It was the second time this came in front of Padernacht’s committee after anonymous flyers posted along the street made what he described as false claims.
HIRAM ALEJANDRO DURAN/ File
Previous Next
By ROSE BRENNAN

Anonymous posting can be a nuisance. But when that anonymity migrates from the internet to the side of city streets, it can cause a bit more trouble — not to mention sending a project you’ve spent the better part of six months working on essentially back to square one.

Such was the case for Community Board 8’s traffic and transportation committee as spring arrived in New York City. Last summer, just as many were coming out of initial coronavirus pandemic lockdowns, complaints started piling up about drag racing and other reckless driving plaguing Independence Avenue on the west side of the Henry Hudson Parkway.

Although serving only in an advisory capacity, the committee formed a working group to brainstorm about how the city’s transportation department could calm down traffic there.

The working group quickly put a series of ideas together, presenting them to the traffic committee last December.

Those proposals like bicycle lanes and street narrowing were met with organized resistance from a large number of neighbors in that area, paring down most of the package to not much more than speed bumps, truffle paint and flexible delineators at select intersections.

Yet, even that was too much for one faceless community member who posted flyers along Independence claiming the committee had “approved” plans to “limit or block” areas in front of certain buildings and entrances to parking lots, as well as adding “unwanted” bicycle lanes along the street.

Those claims weren’t true, traffic committee chair Dan Padernacht said, especially since bike lanes were actually tabled “indefinitely” by the committee. But the full board decided his committee should revisit its ideas for Independence one more time. The result? A much smaller list of recommendations.

“This committee did not approve or put forward bike lanes to the full board, and I think that’s important to know because there are some communications out there suggesting the same,” Padernacht said during a regular traffic committee meeting last month. “What we said at our committee is that we’re indefinitely tabling it, and we’re not taking it up — not now, not in the foreseeable future — with this committee.”

Most of the focus during that March meeting was centered around one apartment building: 3901 Independence, a six-story brick co-op building just north of West 239th Street. Eric Kollin, one of more than a hundred tenants in the building, opposed many of the ideas the committee had ultimately moved forward, particularly flexible delineators at the nearby intersection.

He worried the number of cars between 3901 Independence and the neighboring Whitehall building further down the street could result in the delineators causing more problems than they would solve.

“It would impact the ability of ambulettes, Access-a-Rides and taxis from picking up elderly and disabled passengers outside our building,” Kollin said. “It would encourage Amazon, FedEx and other delivery trucks to double-park on this corner while delivering to our buildings. This would force drivers to go the wrong way in traffic to get around the double-parked cars, thus promoting accidents.”

As in months past, there seemed to be some division over whether the traffic and transportation committee should even be the body handling the issue of reckless driving on Independence. Terrence Moran, who also lives at 3901 Independence, believes it’s actually a public safety issue under the purview of the 50th Precinct.

But this was something the New York Police Department had already addressed in the past, Padernacht said. The precinct’s policy is not to wind up in high-speed chases through dense urban neighborhoods, like that along Independence.

Yet, it was actually more than that, said Ed Green, who chairs the community board’s public safety committee.

“The police simply don’t have the resources to have somebody sit on that particular corner all day and all night, or at a particular time,” he said. “They can’t park a cop on that corner to keep a few people away from doing that.”

Moran was also curious about car crash statistics in the surrounding area. The committee’s vice chair, Deb Travis, had those figures handy: seven pedestrian injuries, one bicyclist injury, four motorist injuries and 55 car crashes over the past five years.

Moran felt that wasn’t a lot, but committee member David Gellman noted it averaged to about one incident a month.

If bike lanes were the bête noire of January’s meeting, this time around, it seemed to be the flexible delineators proposed at the West 239th and West 240th street intersections of Independence. Kollin believed these delineators would detract from the neighborhood’s aesthetic appeal.

“It’s a much more open area,” Kollin said. “It’s urban, but it’s much more suburban in its look. Putting all this stuff on the floors kind of starts to break that up and starts to make it look a lot more urban.”

That apparently was enough for the traffic committee to scrap the delineators. In fact, the only substantial proposal that seemed to remain was to ask for a DOT study of the West 237th Street and Independence intersection. Some had suggested in the past the intersection could use a roundabout or a traffic signal.

The roundabout idea seemed to be off the table, but some support for a traffic signal remained, even if it was fleeting. The full community board will likely have to take that issue up before such a request is sent to DOT.

It might seem there’s not much to show for all the hours the traffic committee has spent on this particular project. But for Padernacht, it’s all in a day’s work.

“I would much rather be transparent and give the public a meaningful opportunity to comment on an issue,” he previously told The Riverdale Press. “For me, it’s just part of the process.”