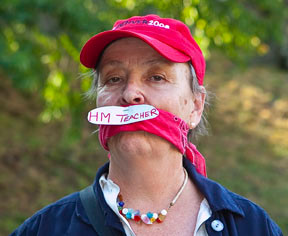 Former English teacher Joyce Fitzpatrick stands across the street from the school on Aug. 16, protesting the school's response to allegations of sexual abuse.
MARISOL DÍAZ/THE RIVERDALE PRESS
By Sarina Trangle

A dozen Horace Mann School alumni clustered near the front of the school Aug. 16, holding white candles and fliers, urging the school to abide by its motto: “Great is the truth and it prevails.”

The Horace Mann Action Coalition, formed after allegations surfaced that teachers had sexually abused students for decades, gathered outside the Alumni Council meeting to urge the school to apologize, acknowledge the sexual misconduct and spearhead an independent investigation into the claims.

Some of the protesters wore white T-shirts with a maroon and black Horace Mann Action Coalition logo on the front and the tagline “I survived Horace Mann” on the back. Attendees included classmates of the abused, parents of their peers, more recent alumni and a former teacher.

Joyce Fitzpatrick, the English Department chair at Horace Mann from 1975 to 1983, tied a red bandana into a mouth gag. She said she traveled from Portsmouth, N.H. because she worried non-disclosure agreements signed by current teachers may bar them from reporting misconduct.

Mr. Boynton said he hoped he and other coalition members would be invited into the meeting of the Alumni Council, which organizes fund raisers, educational and social events for graduates.

“The classy thing to do would be to say, ‘You know, what, this is a new era of openness. Everyone can come in and talk. These protesters outside obviously feel strongly about this, why don’t you come in,’” said Mr. Boynton, a professor at the Arthur L. Carter Journalism Institute at New York University. “That’s not what happened.”

Instead, members brought in a list of questions and reported back that most of the two-hour meeting consisted of alumni questioning Head of School Thomas Kelly and Board of Trustees Chairman Steven Freidman.