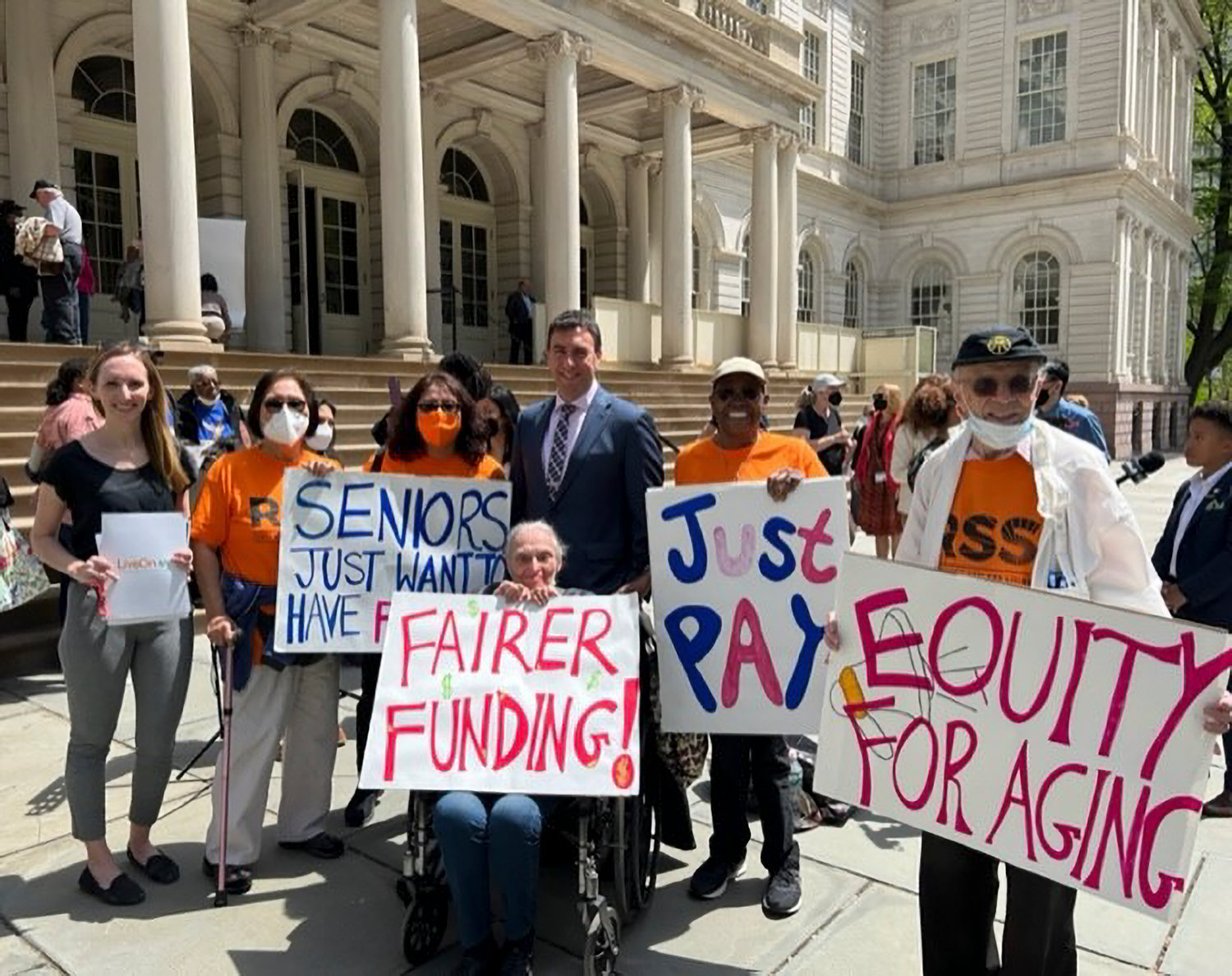 RSS-Riverdale Senior Services residents showed up at the steps of City Hall in Manhattan recently to protest for more funding for the city's aging department.
Courtesy of Margie Schustack/ RSS

Given the resources that are available, we and other providers do our best.”
JULIE DALTON, executive director, RSS
By JOSEPH DE LA CRUZ

Lee Chong is not happy with what she’s seen from Mayor Eric Adams’ $99.7 billion fiscal year 2023 proposed budget. Especially when it comes to her generation.

“I don’t know but in the realm of things,” Chong said. “I would think (we’re) very low on the totem pole.”

Chong, who regularly advocates for senior citizens like herself as chair of Riverdale Senior Services’ social action committee, fears the city’s aging department will suffer significantly as a smaller agency trying to cope with proposed funding cuts. And it’s not that such services were pristine before Adams started pushing his priorities — the agency already depends on center employees who are actually low-paid wage earners.

“The aging services sector and the amount of money that’s in the city’s budget is not a new issue,” said Julie Dalton, the executive director at RSS. “This advocacy (for senior citizen funding) has been going on for years, pre-pandemic.”

But it’s easy for senior issues to get overlooked, Dalton said, especially since funding for the aging department accounts for less than one half of 1 percent of the overall budget.

Adams’ executive budget has drawn criticism for budget cuts to some city agencies and a lack of funding for senior services. This year he set aside $478,7 million for the aging department, which is just $82,46 million less than the appropriated 2022 budget.

“From the budgetary standpoint, we as a provider, who get the majority of our funding from New York City — this is obviously an issue,” Dalton said. “So, the advocacy is just even stronger now, because of the challenges of COVID.”

One of those biggest challenges is balancing those who want to participate in virtual events in the comfort — and safety — of their own home, and those with an overwhelming desire to return to senior centers.

“Given the resources that are available, we and other providers do our best,” Dalton said. “I think the challenges we’re having now is that (certain) older adults do want to come back in-person to the older adult centers. What we try to do is serve people, however they want to be served —  whether in-person, online, or at a location in the community.”

Dalton stops short of saying such funding shortfalls are deliberate.

“An issue for us as providers is that there hasn’t been a cost-of-living adjustment since 2018,” Dalton said. “So that’s also a huge issue for providers. We’re not able to give our staff raises.”

Voters older than 50 were the only demographic to see more than a quarter of their population turn out for primary elections over the past couple years, according to an analysis report conducted by the New York City Finance Campaign Board.

“Seniors, just as (other) renters, are actually more reliable voters than other populations,” Chong said. “And that’s why I find it amazing.”

Chong was among those from RSS and other senior support organizations to attend a recent rally backed by Live on New York, one of the city’s largest advocacy associations for older adults.

It attracted some 200 seniors and aging service professionals, who all gathered on the steps of City Hall. They demanded officials direct more money to senior services. At also attracted a number of city lawmakers, including Councilman Eric Dinowitz, who serves on the chamber’s aging committee.

Live On has been hosting such rallies for nearly three decades, but this was the first physical gathering since the start of the pandemic.

The perception of many is that there was plenty of focus on older adults in the pandemic’s early days. Back then, the city made an effort to ensure there was food and housing for what was believed to be the population most vulnerable to the coronavirus.

But as the number of infected people has declined, so has the interest in prioritizing seniors, it would seem.

City council members have called on Adams to direct more money to a number of projects, including another $43 million to the city’s Youth Employment Program, $3.6 million for electronic waste collection, $250 million for new restrooms at city parks, $30 million for early childhood and special education pre-kindergarten centers, and $3 million for mental health assistance.

“I think it’s for all of us — the nonprofit sector and providers — to always try to look through things through what I call an aging lens,” Dalton said.

It’s a sentiment Chong urges others to do something about.