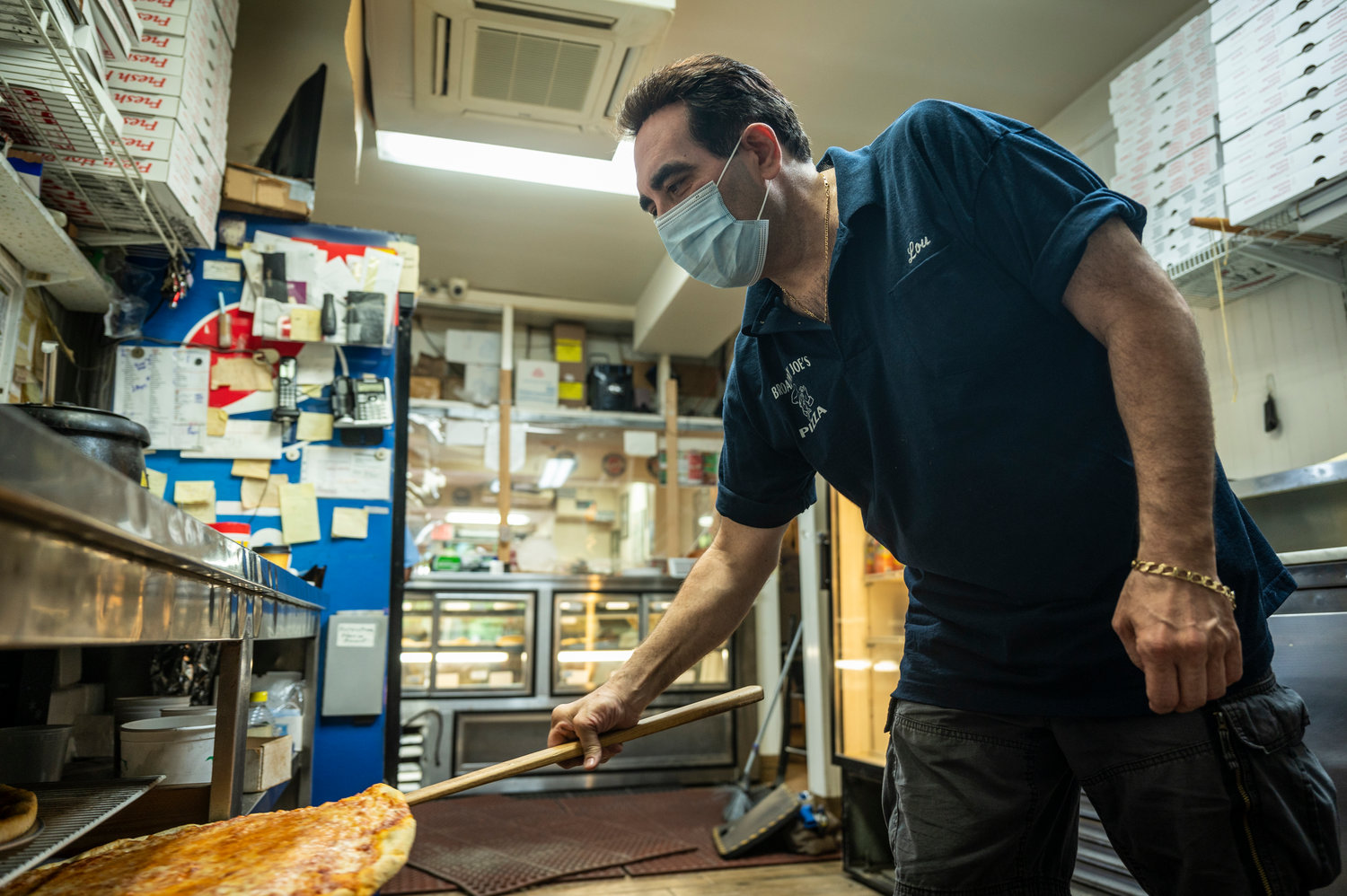 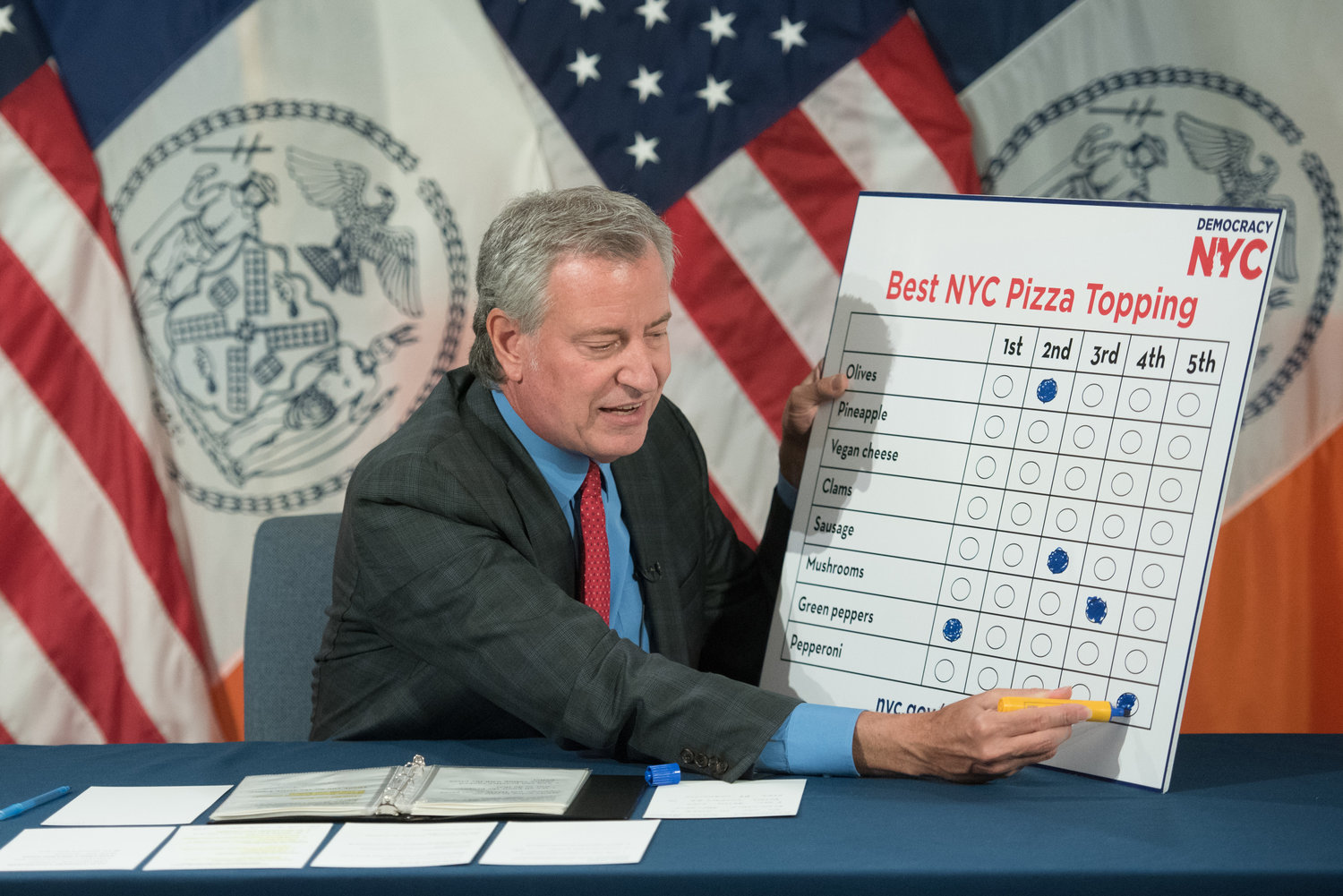 Mayor Bill de Blasio demonstrates ranked-choice voting by putting in order not political candidates for office, but instead favorite pizza toppings. It’s one way the mayor’s office hopes to educate voters about the new process.
Courtesy of Mayoral Photography 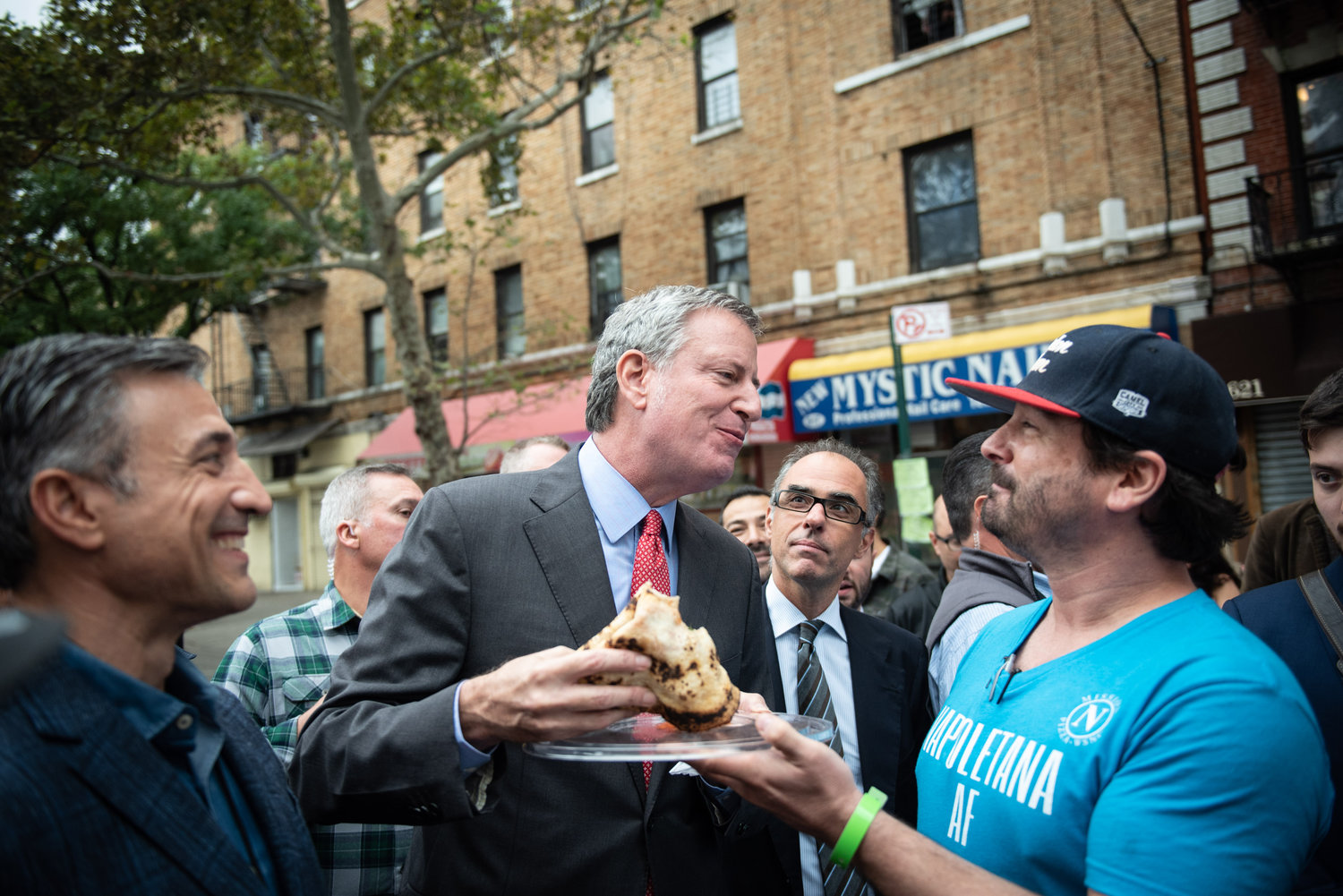 Mayor Bill de Blasio joins some of his constituents to eat a hot slice. The mayor is touting an online simulation designed to demonstrate ranked-choice voting by filling the ballot with favorite pizza toppings rather than political candidates.
Courtesy of Mayoral Photography
Previous Next
By JILLEEN BARRETT

Politics has a way of dividing people based on their unique experiences, specific identities, and simply the way they see the world. While this may increase tensions at the polls, there is one thing that can unite Republican, Democrat, Libertarian, and really any other political belief from all walks of life: a hot slice of New York pizza.

And it’s that very tomato sauced- and cheese-layered pie Mayor Bill de Blasio and his chief democracy officer, Laura Wood, hope will help voters understand the city’s new ballots when they visit the polls Tuesday. It’s a demonstration of a ranked-choice voting system not to decide who will fill what office, but instead on what pizza topping is best.

“This year, democracy gets an upgrade in New York City,” de Blasio told reporters. “But any new system takes time and practice to get it right. That’s why we’re calling on every New Yorker to rank their pizza toppings. It’s a fun, interactive way to demonstrate ranked-choice voting, and get New Yorkers excited to cast their ballot this year.”

And for this particular vote, you don’t even have to visit a polling site. Instead, it’s as simple as logging on to NYC.gov/VotePizza, and start ranking. Choices include olives, pineapple, clams, vegan cheese, pepperoni, sausage, mushrooms and green peppers.

“Ranked-choice voting will give New Yorkers more of a say in elections,” Wood said. “This year, as you are making your voting plan, make sure you are prepared to vote by practicing ranked-choice voting with our pizza topping challenge, and help spread the word by sharing the ballot with your family, friends and neighbors.”

de Blasio and Wood have recruited others in the mayor’s administration to vote. Jordan Stockdale, executive director of the Young Men’s Initiative — a city organization addressing disparities faced by young men of color — prefers sausage, peppers, onions, mushrooms and Canadian bacon — although he’ll have to write in a few of those, because they’re not on de Blasio’s ballot.

But what do actual pizza shop owners think, especially much closer to home here in the Bronx? Louis Porco owns Broadway Joe’s near the West 242nd Street stop of the 1 train. His pies commonly come with pepperoni, chicken and sausage.

Just down the road, the Kingsbridge Social Club near West 238th Street also cites pepperoni as a customer favorite, although the restaurant is home to an exclusive combo pizza with raw prosciutto as well as homemade spicy honey, according to sous chef Samantha Ortiz.

And while some of these toppings are not listed on de Blasio’s ballot, the choices that are there have already accumulated more than 15,000 votes in its first round as of Monday.

Some critics have said the new system is too complicated, or really doesn’t make any significant changes at the polls. Ranked-choice already has been used in several special election races this year, including one for Andrew Cohen’s former council seat in March.

The idea is that by asking voters to rank their choices, elected officials can be chosen by an actual majority rather than through whoever simply gets the most votes — even if it’s nowhere near an outright majority.

Ballots are initially counted with all the first-choice candidates.

If no winner achieves 50 percent of the vote, then precincts continue the count through elimination rounds, where the lowest vote-getters are tossed, and their ballots jump to the next highest-ranked available candidate.

This continues until just two candidates are left, with one crossing the 50 percent threshold.

Sean Dugar, the education campaign program director at voter education group Rank the Vote, says the new voting system not only allows the liberty to rank the candidates, but it also saves the city money. Through ranked-choice, there is no need for a run-off election, as voters make their choices known with a single trip to the polls.

“The city spends anywhere from $10 to $15 million on our run-off election,” Dugar said.

“And with ranked-choice voting, run-off elections have now been eliminated.”

Dugar believes ranking something like pizza toppings in the name of education can be both beneficial and entertaining. And it’s certainly helpful that some might be more passionate about pizza than a candidate for local office.

“New Yorkers love pizza,” Dugar said. “Being able to find something that’s catchy and fits in with the voters is great.”

But not everyone is convinced. Margaret Groarke, a political science professor at Manhattan College, does not feel de Blasio’s pizza ballot will encourage more people to vote. Still, she sees benefits to the new method — even if it might not provide the bump at turnout as some elections officials hope.

“I don’t think that there’s anything about ranked-choice voting that would make people more likely to show up,” Groarke said.

Groarke thinks when it comes to elections for people — as opposed to pizza — voters should consider their choices carefully and rank the candidates based on their personal senses of likability.

“The New York Times said the other day that people shouldn’t overthink ranked-choice voting, and I think that’s good advice,” she said. “People should rank a couple of candidates in the order that they liked them. People shouldn’t rank anybody that they wouldn’t like to see win. And that’s all there is to it.”