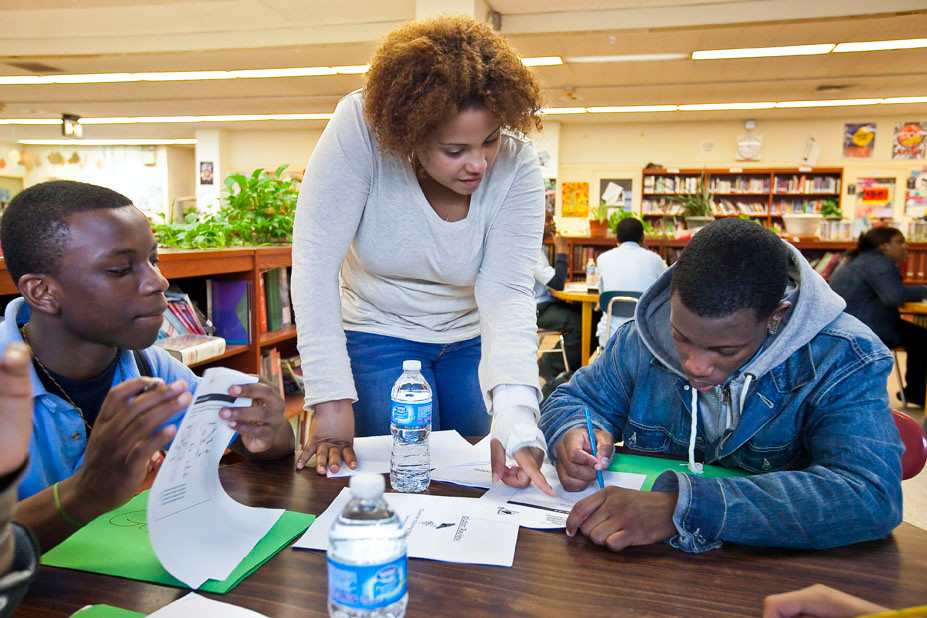 Jiamonte Johnson, 14, scanned the practice algebra test before him on May 9. The Kingsbridge freshman at New Vision Charter High School for Advanced Math and Science skipped the first question about the circumference of a pizza. He and the four students surrounding him at the library table calculated the age of two brothers with information from two equations. Jiamonte announced he would “graph out” the next problem.

Since Jiamonte began attending the weekly after-school Regents prep course on April 4, he said he’s seen his score on mock math Regents exams jump from 73 to 82.

“When I come down here, I get to practice what I learned upstairs … My math teacher is very good. But it’s hard to remember because he introduces one subject and then does one day of review. Then the next day, he introduces a new subject,” said Jiamonte. “I feel pretty excited for [the Regents] because ever since I came here, I’ve been doing pretty good.”

When the freshman class gets dismissed two-and-a-half hours early each Wednesday, Jiamonte and nearly 30 of his peers head to the library. They sit four or five to a table, collaboratively working through past exams in subjects like living environment and algebra. Students and staff from Manhattan College’s Optimal College Readiness Center point freshman in the right direction during the tests and review the answers at the end of the two-hour program.

Ruby Bermudez, the assistant director of the Optimal College Readiness Center, said the college partnered with Urban Ellis, the director of the New Marble Hill Tenants and Civic Association, to bring its college prep program onto the John F. Kennedy High School Campus. JFK, which will graduate its last class in 2014, was known for having a high dropout rate.

The Optimal College Readiness Center decided to work with students at one of the new charter schools inside JFK to help keep students on track. Mr. Ellis, who has spearheaded several academic programs for underserved youth since retiring, said he knew the consequences of dropping out first hand.

Sarina Trangle, School Desk, Jiamonte Johnson, New Vision Charter High School for Advanced Math and Science, regents, Manhattan College, Ruby Bermudez, Urban Ellis, Recalling the Holocaust Hundreds of freshmen and sophomores seated in the Marble Hill School for International Studies auditorium leaned forward, and watched Esther Bauer, 88, a Holocaust survivor living in Yonkers, walk to the front of the room. Gasps reverberated across the auditorium as Ms. Bauer began discussing how her life in Hamburg changed once Adolf Hitler came to power when she was 9. Ms. Bauer’s all-girl class at the Jewish school, where her father was the principal, dropped from 42 students to three that year. Soon, Ms. Bauer’s family was forced into barracks in Czechoslovakia, where she met her first husband. He was moved three days later, and Ms. Bauer agreed to follow him because she was told he was deployed to build another ghetto. Instead, she was brought to Auschwitz, one of the most notorious concentration camps. Ms. Bauer lived off a daily piece of bread and cup of coffee. Each night she was reminded of the threat of the gas chambers when she heard trucks drive screaming crowds to the showers and a stench wafted out. Later, Ms. Bauer was moved to a German camp where she and other girls “grabbed the grass and ate it because we were so terribly hungry” on their daily march to a 12-hour shift of building airplanes. Between the beatings and abuse, the only “act of sabotage” Ms. Bauer dared to commit was to make her piece of steel too short or too long since it was hidden under other parts of the airplane. Ms. Bauer was liberated and immigrated to New York. However, her first husband and parents died in concentration camps. “For the first 20 years, I couldn’t talk about it. For the next 20 years, nobody wanted to hear about it. Now I speak whenever I’m asked, ” Ms. Bauer said. “I tell them at the end that they have to see to it that this never happens again.” Students asked, and discovered, Ms. Bauer never got a number tattooed on her because in Auschwitz, “we were either supposed to be killed or taken out of camps to work.” She told them she had “no faith whatsoever” because “if there is a God who let this happen, I would kill myself.” Yet, she said she never lost the will to live and learned that regardless of heritage, “there are good people and bad people.” Several students, including sophomore Leidy Pichardo said “having someone talk to you about it, helps you feel the pain” and understand the Holocaust in a way that books can’t. Abraham Alawe, a sophomore, said he was grateful to hear Ms. Bauer speak, especially because “he had a connection to the Holocaust.” His grandfather in Morocco was drafted into the French Army, where he was captured for assisting Jews in World War II. Abraham’s grandpa managed to escape by crawling through a sewage pipe, but died shortly after that. Bomb threat at Science Staff at the Bronx High School of Science received an anonymous e-mail early May 9 stating that a bomb would explode inside the school if exams weren’t canceled. Police were called at about 8:47 a.m. Officers worked with school safety task force agents to interview personnel and check the perimeter of the high school. Students were not evacuated during the investigation. Officials determined the school was safe later that afternoon. Police had not made an arrest as of press time. Area schools rank nationally The High School of American Studies at Lehman College placed 42nd among nearly 22, 000 public high schools studied nationwide for the U.S. News & World Report’s annual Best High School raking released May 8. The High School of American Studies was ranked the sixth best high school statewide. The study named the Bronx High School of Science the 63rd best school nationwide and the 10th best among its New York peers. Mexican studies at Lehman Lehman College launched what university officials said was the first Mexican Studies Institute on the East Coast with a May 11 conference on health among Mexican immigrants in America. Lehman President Ricardo Fernndez said the college was eager to unveil the institute to the quarter of New York’s 350, 000 Mexican population that lives in the Bronx. “Lehman College is proud to provide a home for this important CUNY initiative, which will focus on both academics and service, providing a hub for research and advocacy projects throughout the university and region, ” Mr. Fernndez said in a press release, Tiana Roman, Marble Hill School for International Studies, Esther Bauer, Holocaust, Bronx High School of Science, bomb scare, American Studies at Lehman College, Mexican studies.
Page 1 / 4