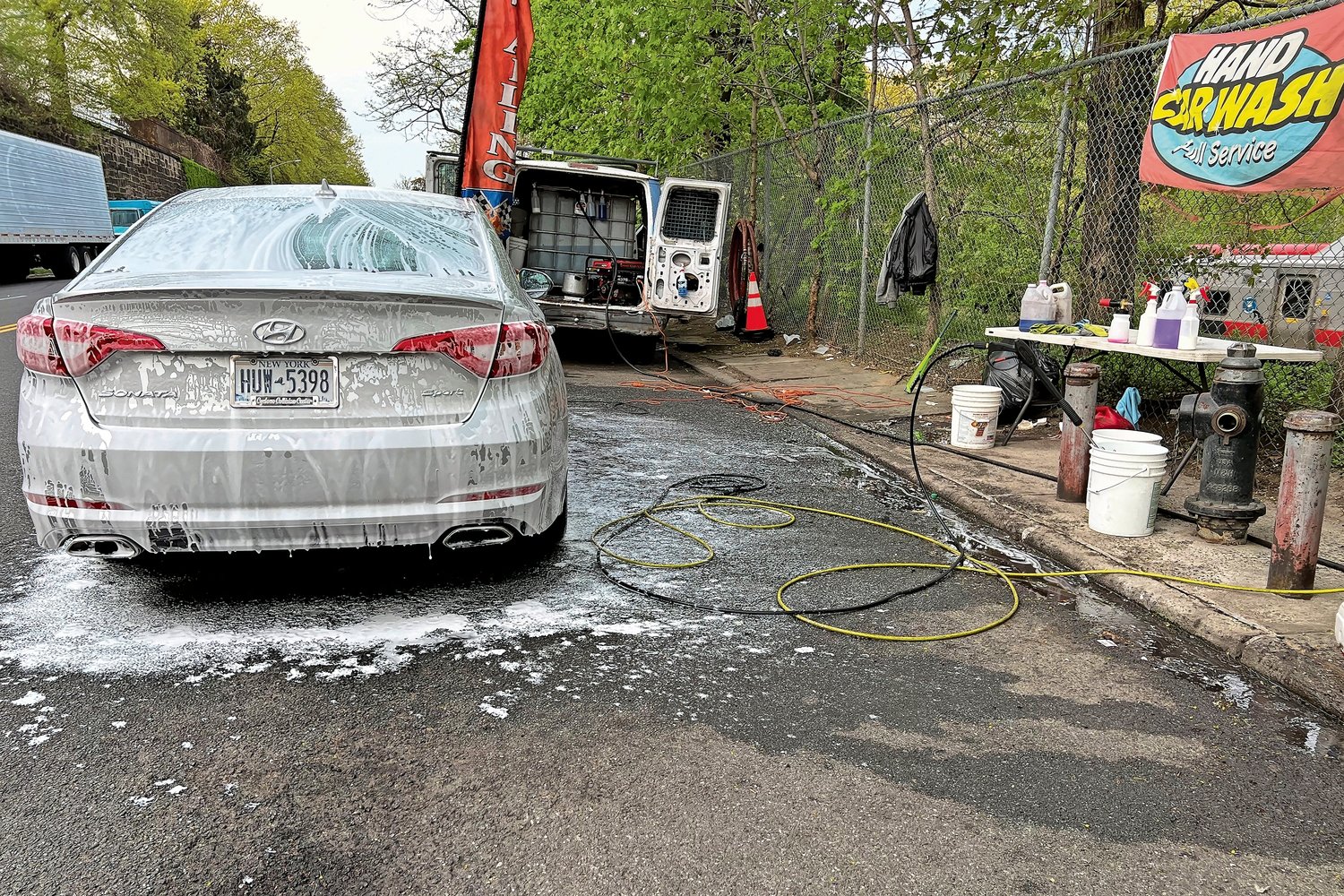 This mobile car wash is one of the many such businesses on Webster Avenue, but Latoya Stewart said it has been here the longest. For the past two years, an increase in mobile car washes has interrupted the quality of life for residents between East Gun Hill Road and East 233rd Street.
STACY DRIKS 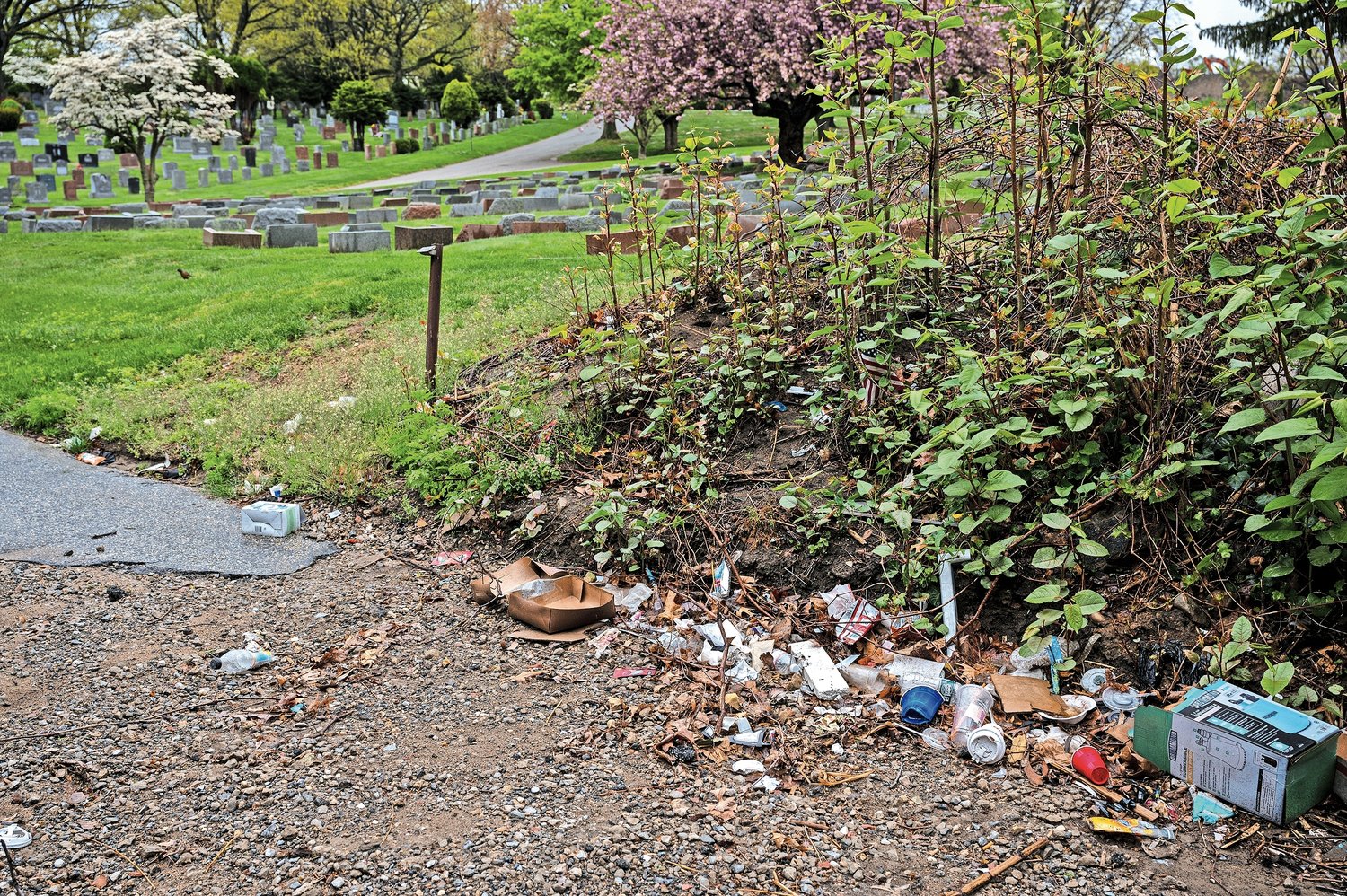 Trash tossed into Woodlawn Cemetery from Webster Ave on Wednesday May 4, 2022.
Hiram Alejandro Durán
Previous Next
By STACY DRIKS

Latoya Stewart looked outside her window on Webster Avenue on Thursday afternoon and saw a mobile car wash stationed across the street. Without thinking twice, she left to confront the owners of the vehicle, who were ready for business.

“Nothing about this is right,” Stewart told the workers. “I don’t want to look out of my window and see you wash a car.”

She left without a response from the workers.

For Stewart, who has lived between East Gun Hill Road and East 233rd Street the past four years, it started with one guy two years ago. “Now, they are all here,” she said.

A potential customer sees the van, pulls up, and the person running the car wash gets to work. This particular car wash charges at least $10 for a basic wash. Compared to a brick-and-motor car wash, it can be seen as a good deal for most drivers. Depending on the day and weather, there can be 15 mobile car washes set up, according to neighbors.

Councilman Eric Dinowitz and his father Assemblyman Jeffrey Dinowitz, who represents Webster Avenue where the car washes are located, visited the street on April 29 to see the situation firsthand. Other agencies such as the sanitation department, the 47th Precinct, and the consumer worker protection department came along.

“That’s why they (workers) cleaned the place! All the garbage and vans were gone; I thought it was finally over,” Stewart said.

Workers took a “vacation day” as the agencies explored the commercial zone that borders Stewart’s apartment. Residents have complained about dumping and run-off of cleaning products and wastewater.

“Based on the information we got from the Department of Consumer Worker Protection, none of the car washes that we’ve gone by have permits,” the councilman said. “According to police, some of the vehicles don’t even have VIN.”

Consumer Worker Protection told The Riverdale Press that they could not look up if they are licensed without knowing the specific business, such as names or owners.

“Operating a mobile car wash without a license is illegal, and we are exploring additional enforcement opportunities in this area,” said spokesperson Laura Feyer of the consumer protection department.

Stewart sent her first complaint via 311 last year. After repeated complaints, she felt that the city service line didn’t take her messages seriously.

When she reached the sanitation department on Twitter regarding the dumping, the department quickly looked into it. With discretionary city funds that councilman Dinowitz administered, the department operated motorized litter patrols in the area.

“We will impound any vehicle involved in illegal dumping, and we are increasingly using cameras to help enforce this law,” said sanitation department spokesman Vincent Gragnani.

New sanitation commissioner Jessica Tisch aims to clean the streets in early July through the “Clean Curb Pilot.” The pilot will test methods for getting garbage off the streets. The program is designed to clear out rodents, improve aesthetics and take back parts of city streetscape.

“My goal isn’t just to pick up the trash after it’s dumped,” the councilman said. “My goal is to bring together different city agencies to ensure that we fix the problem so that the illegal dumping doesn’t occur in the first place.”

Stewart believes that the councilman is fighting for her neighborhood for his district’s own benefit.

“I’d rather not wait until it happens in other parts of the district, the main concern we’re getting is on Webster,” the councilman said. “But it could happen on White Plains Road, on a Van Cortlandt Park South, or on Independence Avenue.”

The Assemblyman’s office has received reports of multiple car washes along Broadway. However, those did not seem to turn into long-term operations.

“Rich neighborhoods lose property value if the neighborhood is not clean,” Stewart said, “When (certain) people want things done, they take care of their people.”

Since mobile car washes can take up two parking spaces, Stewart believes many of her neighbors with cars have to find spots farther away from their homes. Many will even double-park outside their homes and get tickets while the car washes are not fined.

“There’s a sense of fairness that that’s not there,” the councilman said. “Why are certain businesses required to pay to pay rent and taxes and abide by rules? “An unlicensed carwash is able to skirt the rules and benefit from breaking the rules.”

But more importantly, it’s a safety issue. If the fire hydrants are left open and they leave the water running, that could significantly affect the water pressure, the councilman said.

If firefighters need to use a hydrant, they won’t be able to do so because mobile car washes are tapping into the city’s water supply near the hydrants.

Stewart said she already has one foot out the door and will eventually follow her neighbor, who is packing to leave for another apartment in the Bronx.