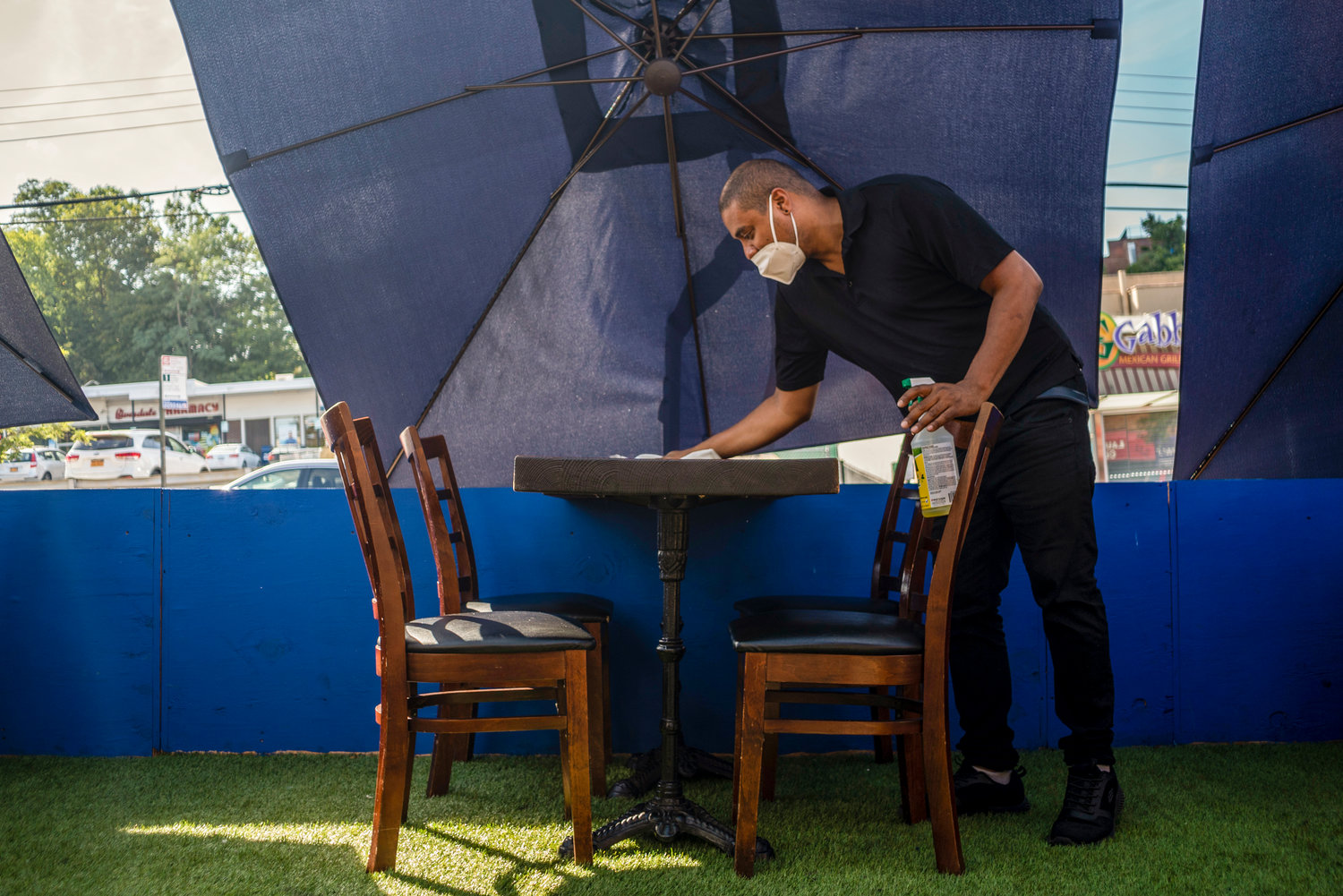 City officials say outdoor dining has helped more than 11,000 restaurants across the city during the coronavirus pandemic. If the program is made permanent, those same officials say they hope to make the process easier for eateries to take advantage of. Still, some Community Board 8 leaders like Charles Moerdler worries about long-term effects of such a program.
HIRAM ALEJANDRO DURÃN/ File 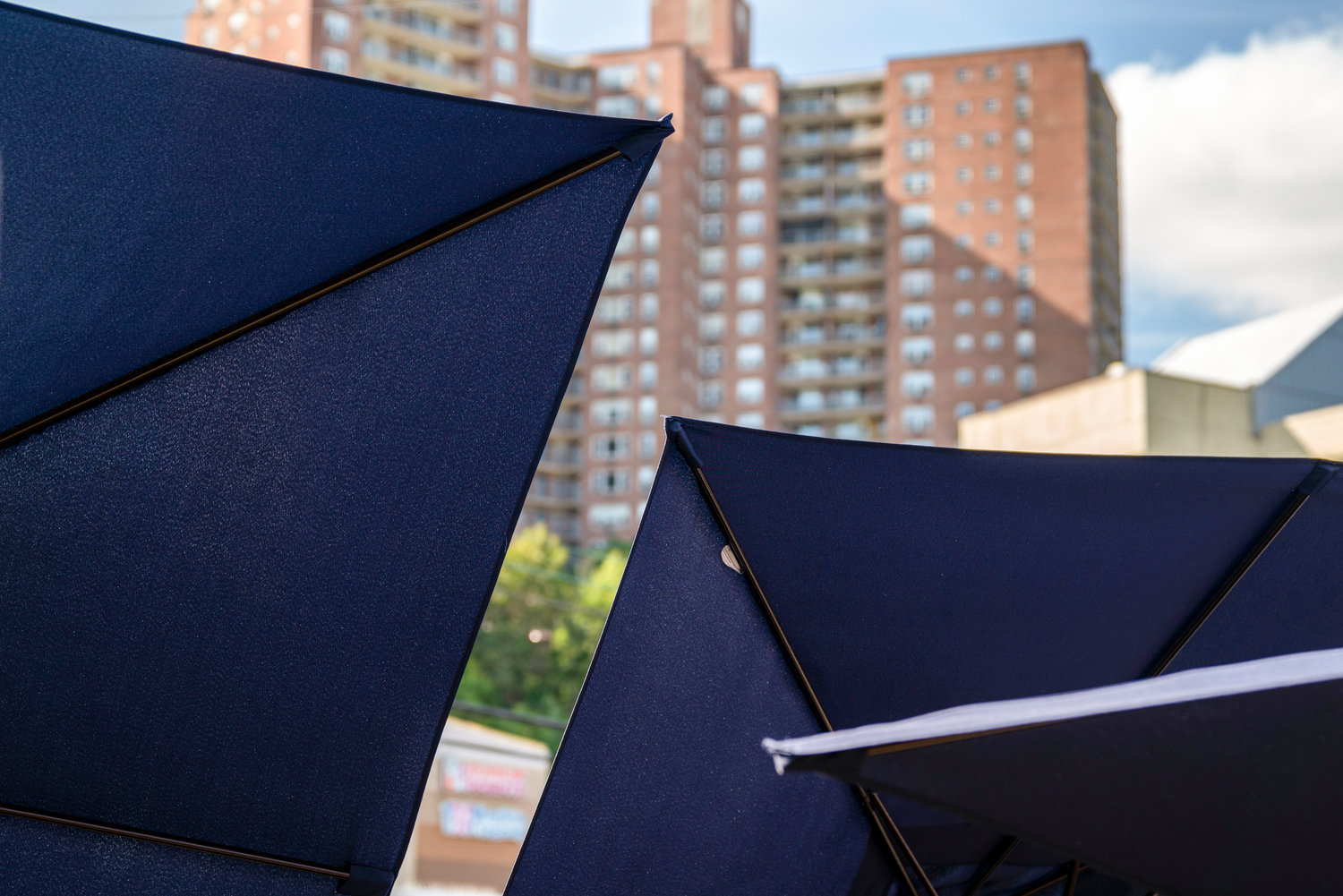 Structures for outdoor dining can be as simple as umbrellas on tabletops, or wood builds that require no permit or municipal oversight. A common sight since the start of the coronavirus pandemic, the city’s transportation department is exploring the possibility of making such offerings permanent.
HIRAM ALEJANDRO DURÃN/ File 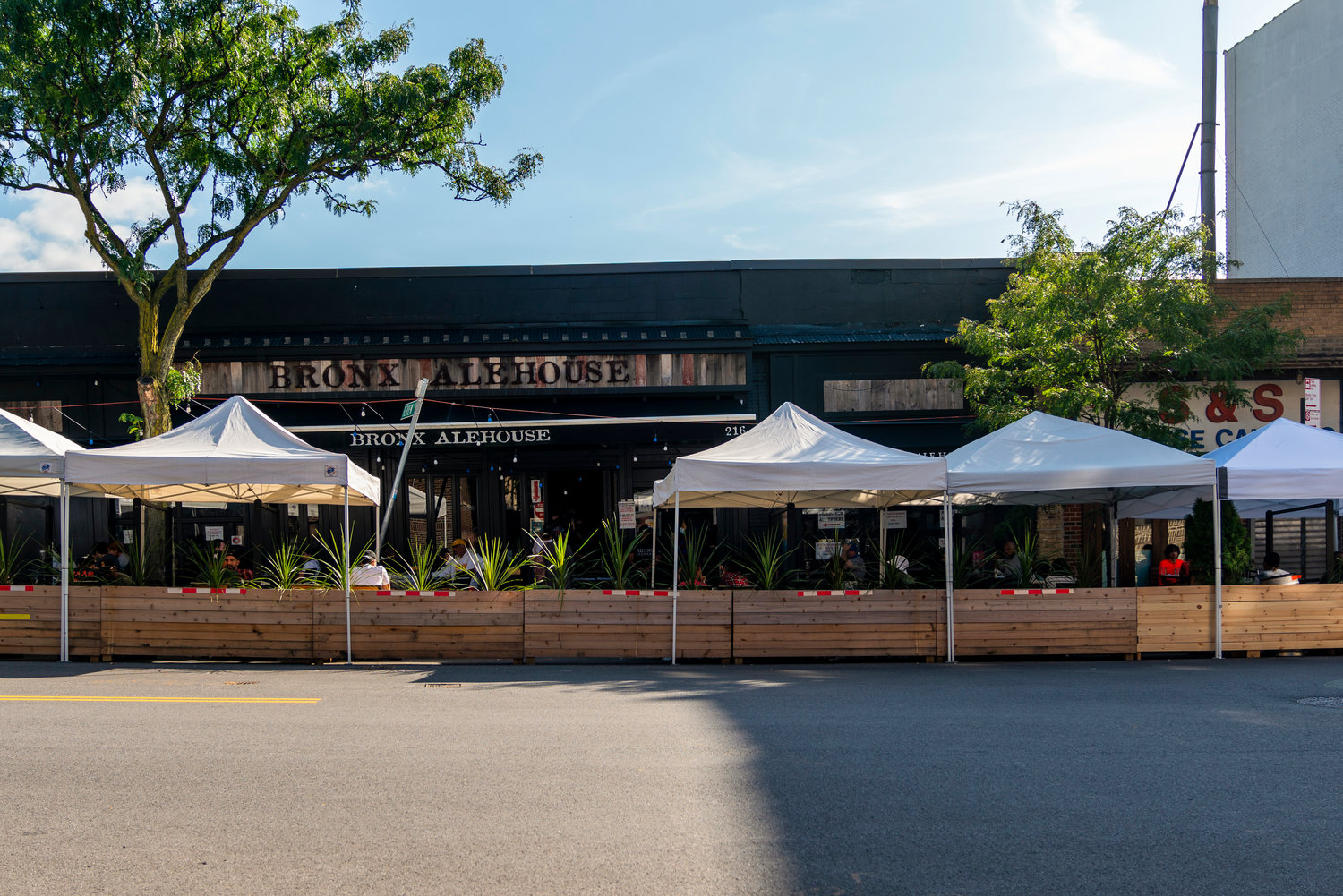 Bronx Alehouse has extended its outdoor dining to West 238th Street, something they started doing in the early days of the coronavirus pandemic. But such structures could become part of the longer-term city landscape if the transportation department succeeds in making them permanent.
HIRAM ALEJANDRO DURÃN / File 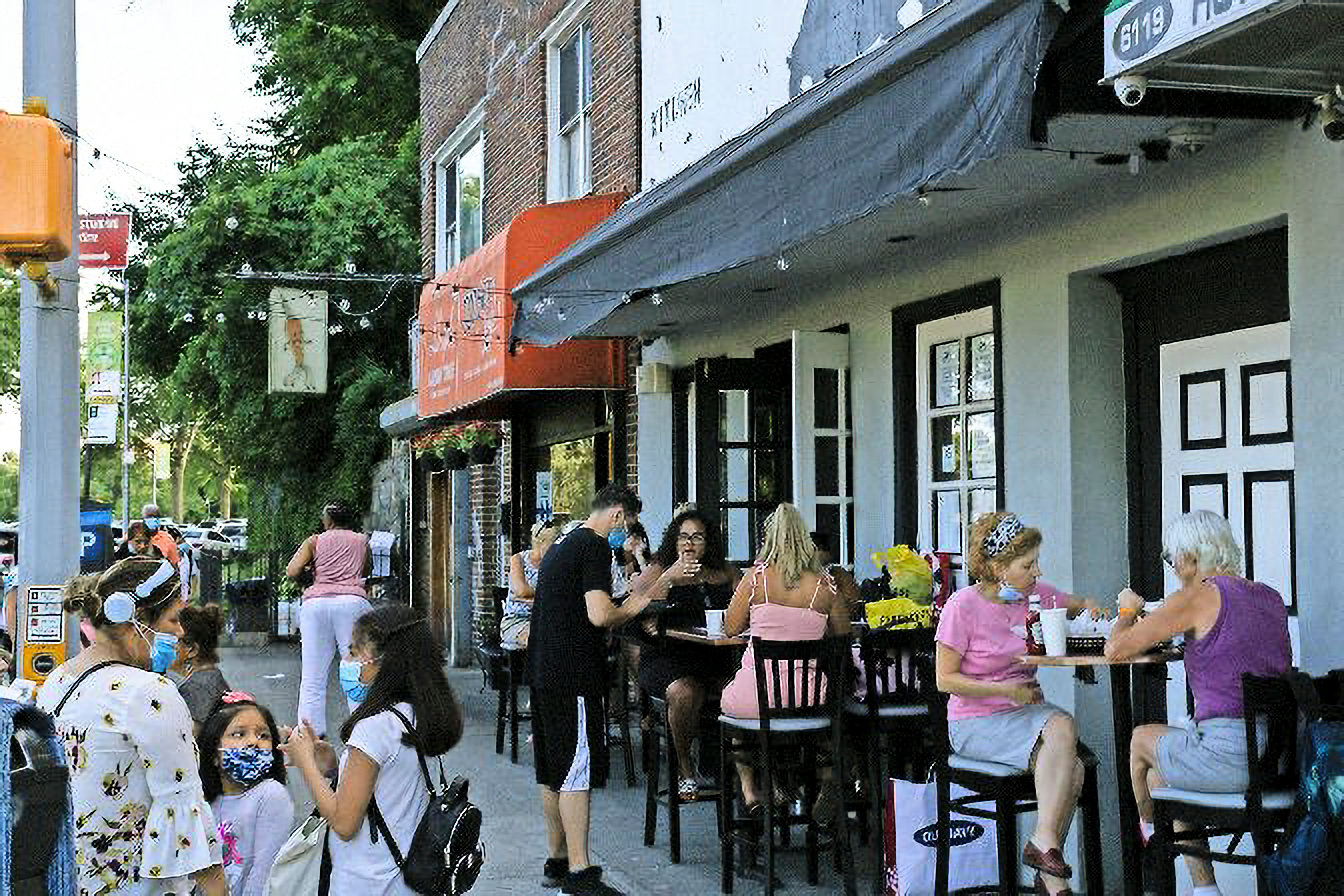 The city’s transportation department is now exploring whether to make outdoor dining a permanent part of the city’s business districts. That’s not as easy as the agency might think, Community Board 8 land use chair Charles Moerdler warns.
NOAH BENUS/ File 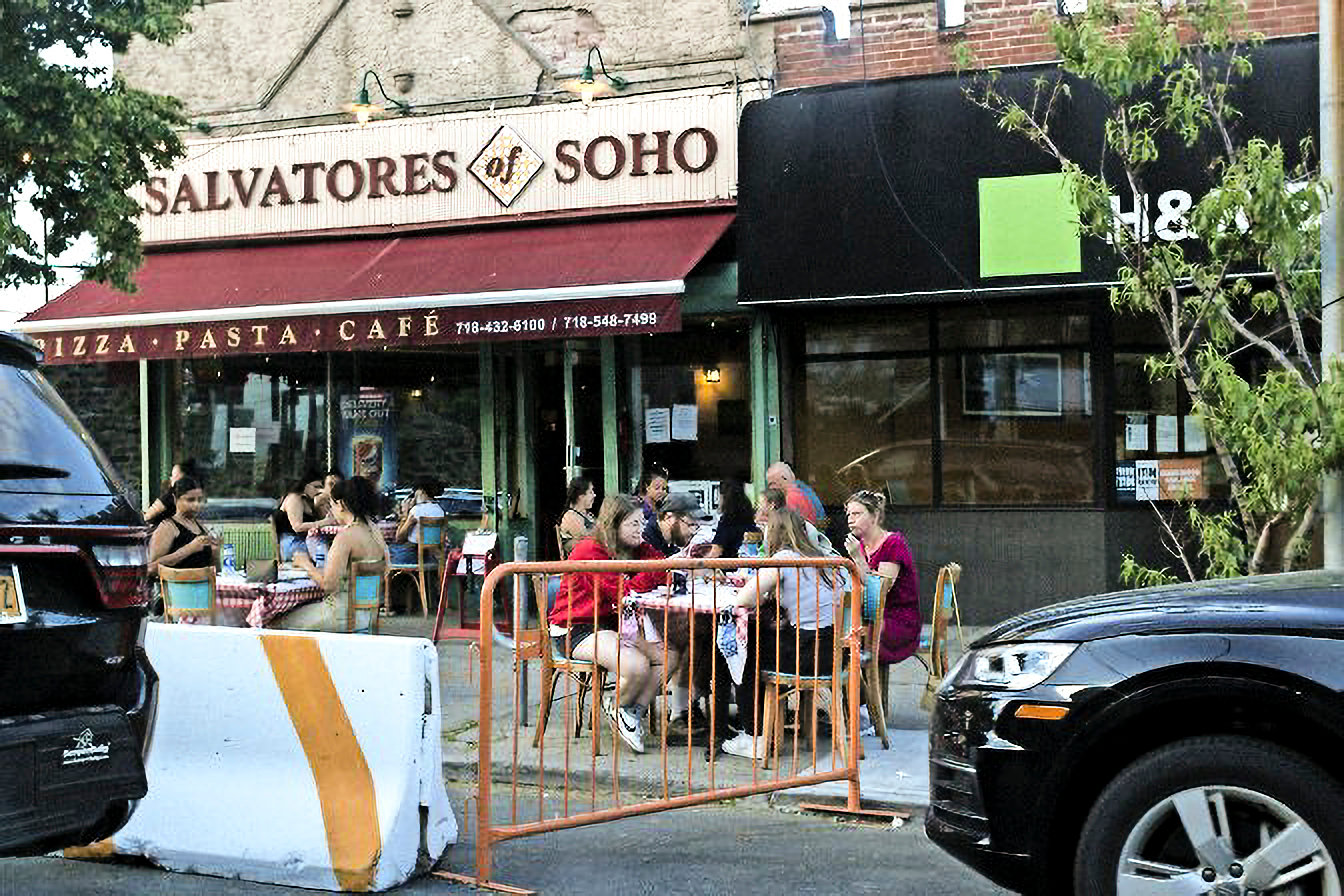 Community Board 8 leaders like land use chair Charles Moerdler says there isn’t much oversight in the city’s outdoor dining program. While that might have had minimal issues during the coronavirus pandemic, that’s something that could become real trouble if the program were to be made permanent.
NOAH BENUS/ File
Previous Next
Support journalism

Unless you’ve been locked down under a rock over the past 18 months, you may have noticed the city’s streets and sidewalks have been breached by outdoor diners.

While New York City always has had outdoor dining, the trend exploded when public health officials required restaurants to close indoor dining as a way to curb the spread of the coronavirus.

That allowed restaurants to not only commandeer sidewalks, but streets, too. In fact, some 11,000 restaurants are now participating, or have in the past. That, Bronx transportation commissioner Nivardo Lopez said, has saved upward of 100,000 restaurant industry jobs.

“By many accounts, the program has been a lifesaver,” Nivardo told Community Board 8’s land use committee earlier this month — “not just to the restaurant industry, but also to the city, which has seen the sort of impact that outdoor dining can (have on our) streets and sidewalks, and sort of bring those streets and sidewalks to life.”

Now the city’s transportation department is exploring making such dining options permanent. To do this, Lopez said, the city will need to remove some of the restrictive language in its zoning laws officials believe discourage businesses owners from applying for sidewalk use permits in the first place.

Despite some challenges, the city has seen success from the outdoor dining program, Lopez said — specifically because no location was off-limits, the process was free and easy to access, and sidewalks provided more space than some establishments could accommodate otherwise.

However, Lopez did acknowledge there are still concerns of how much impact the outdoor dining was having on the rest of the non-dining city. One of those concerns was for the disabled community and the trouble some have had mobilizing around certain areas due to the lack of sidewalk space.

“We think the introduction of the roadway option is a tremendous new opportunity for restaurants, especially those who may have narrow sidewalks,” Lopez said. “But we also recognize that there’s been a lot of challenges and a lot of complaints with the roadway seating.”

One of those complaints came from the New York Fire Department, which says its trucks sometimes have difficulty navigating turns on corners and being able to spot safety signs due to the obstruction of roadway eateries.

The current program, as it is, would last until a permanent program was established — something Lopez estimated would likely happen by 2023. Charles Moerdler, chair of the land use committee, said more thought has to go into the program before DOT can consider any permanent implementation.

“There are no known design criteria,” Moerdler said. “And there are no two sidewalk/roadway cafes that bear resemblance in terms of structural concerns. Some of them are so weak and badly constructed that one car taps it, and the whole thing goes down, as we saw on (West) 256th Street and Riverdale Avenue.”

Moerdler is referring to an outdoor dining area in front of Connaughton’s Riverdale Steak House, which was destroyed last winter after a car reportedly skidded out of control in the snowy intersection and collided with the structure, collapsing its roof. The incident happened late at night, so no one was inside the structure when it collapsed.

Moerdler also took issue with the DOT’s plan to leave the outdoor dining structures up during the wintertime when clearing streets of snow is a much higher priority.

“So now we’re going to have the situation of snow, accumulated snow, sanitation piling up snow, the roadway café and” sidewalk cafes, he said. “There is a disregard of transportation on the vehicular side.”

The city would require restaurant owners to take down outdoor dining structures between November and March, Lopez said, but added certain exceptions would be made for owners who filed hardship waivers.

But who would oversee all this, Moerdler asked? There wasn’t enough accountability in the proposed program for his liking.

“This is self-certification,” Moerdler said “An architect or an owner of one of these sidewalk places can certify it on his own without an architect or an engineer attesting to its appropriateness in terms of architectural design or safety.”

Moerdler loves the idea of sidewalk cafés, but had had issues with safety there, as well. But city officials are well aware of these concerns, Lopez said. They don’t expect there to be issues going forward as part of a more permanent program.

All enforcement would be housed under the transportation department through a dedicated unit, Lopez added.

“This sort of system now,” he said, “where we just issue warnings and then eventually issue a cease-and-desist, will be replaced by a system of fines and removals.”

The original outdoor café program was administered by the city’s consumer and worker protection department, but was said to include a complicated application process for restaurants.

If the city has its way, a permanent outdoor dining program would be administered by the DOT. Right now, Lopez said, eateries can more easily apply for extensions under the temporary program to maintain dining on nearby sidewalks and roadways.

Moerdler believes the city is rushing its outdoor dining plan, blinding officials to potential problems down the road.

The temporary program remains in effect while New York City tries to avoid a major delta variant outbreak in the ongoing coronavirus public health crisis. But even if the pandemic itself finally comes to an end at some point in the near future, officials said they expect to see the temporary outdoor dining continue until at least next year.