Reversal a win for reservoir neighbors, loss for city

The Jerome Park Reservoir’s north basin is partially full now after widespread outcry by community members who railed against the environmental protection department’s plan to keep that basin drained. In a victory for neighbors surrounding it, the State Historic Preservation Office withdrew its endorsement of DEP’s plans for the reservoir.
JULIUS CONSTANTINE MOTAL 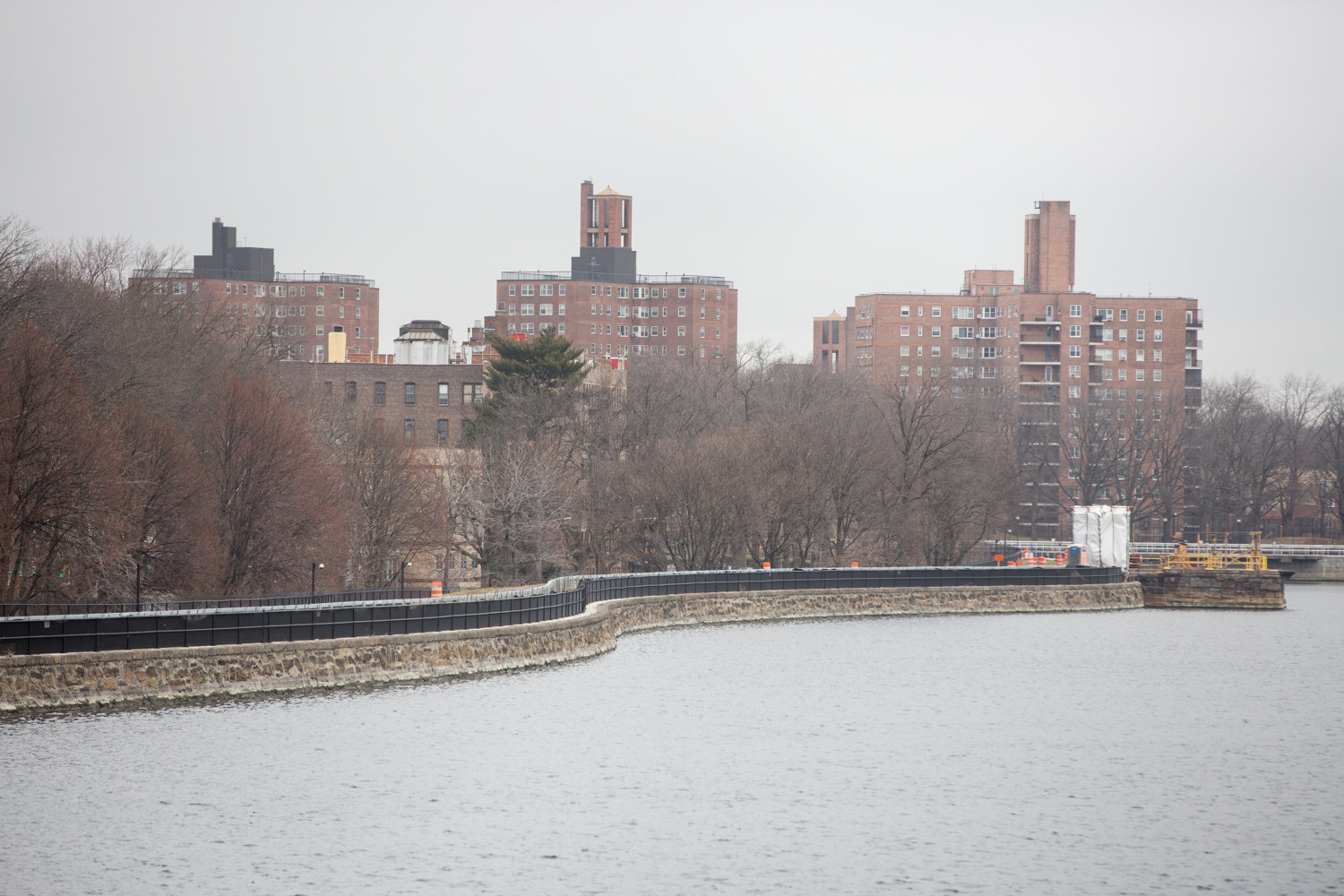 If residents near the Jerome Park Reservoir could have it their way, both massive water basins would be full year round. A recent decision by the State Historic Preservation Office may mean those neighbors may their wish. Without the state agency’s nod, the project’s future — including plans to leave one of the basins partially full permanently — is in question.
JULIUS CONSTANTINE MOTAL 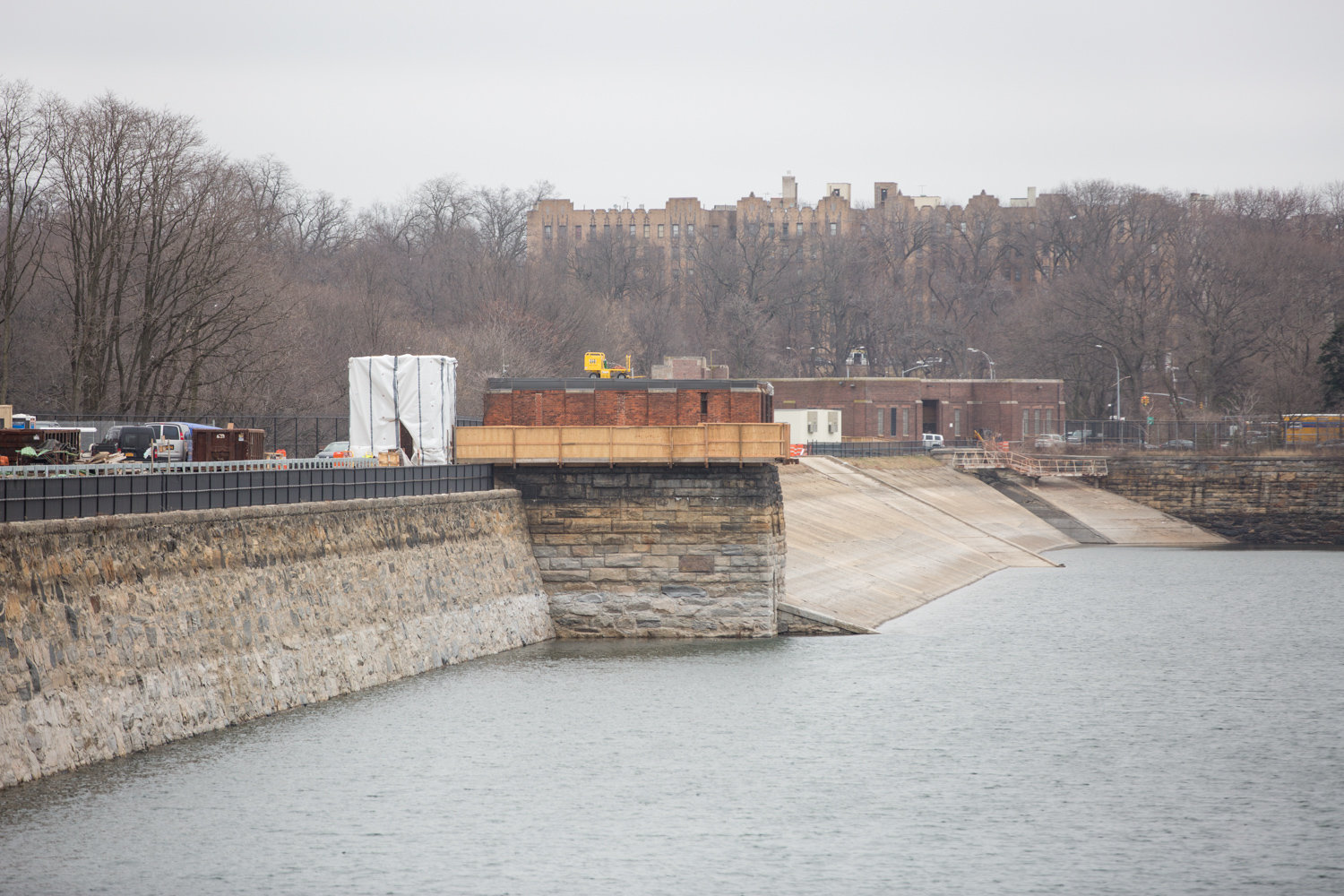 Neighbors of the Jerome Park Reservoir have scored a victory against DEP after the State Historic Preservation Office withdrew its endorsement of that city agency’s plans to spray concrete onto reservoir’s interior walls and keep the north basin mostly dry.
JULIUS CONSTANTINE MOTAL 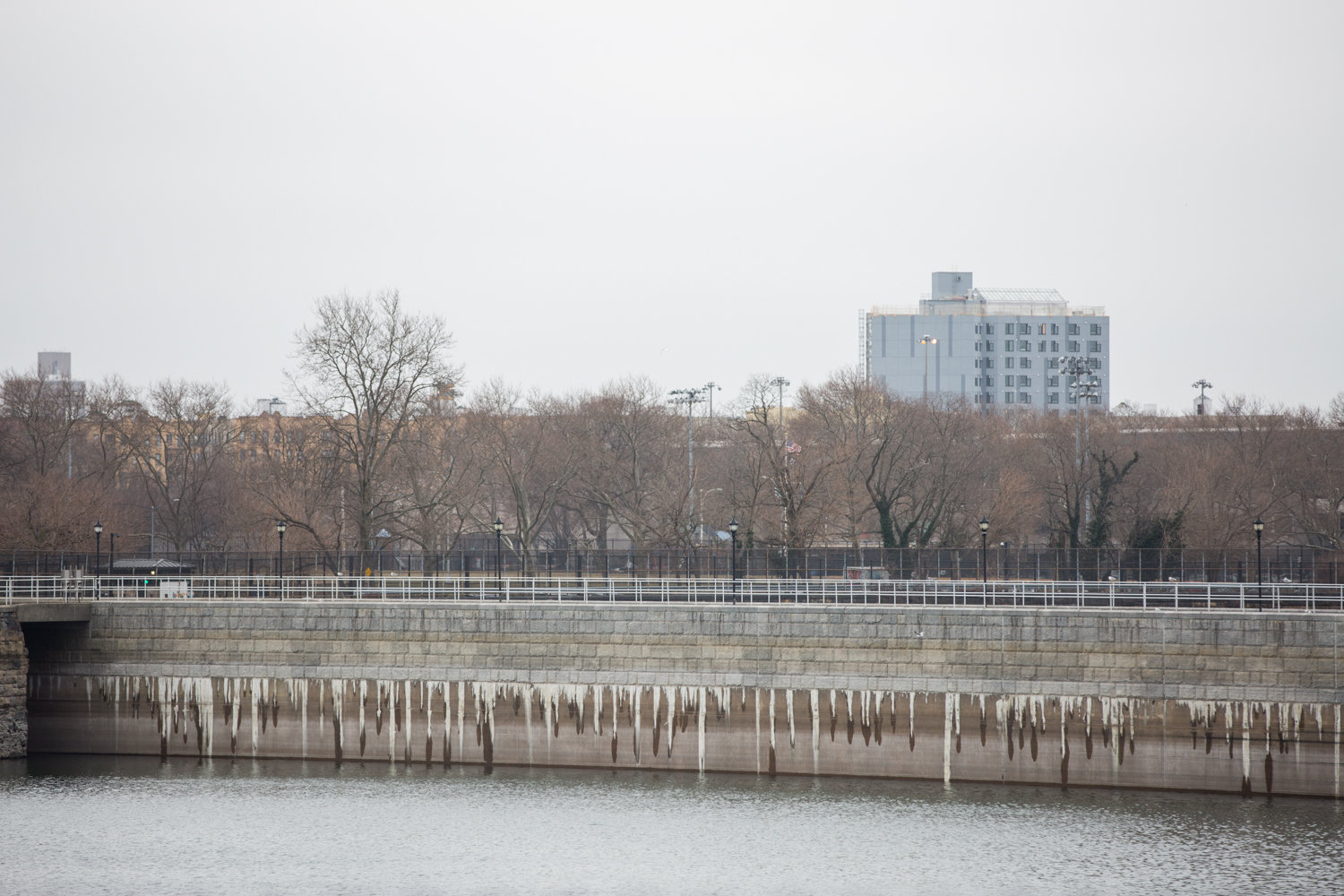 Jerome Park Reservoir’s status as a national historic site seems to have played a role in the ongoing dispute between DEP and neighbors furious over the agency’s plans for it. The State Historic Preservation Office withdrew its endorsement of DEP’s plans for the reservoir, meaning that long-term, both massive basins could be filled with water.
JULIUS CONSTANTINE MOTAL 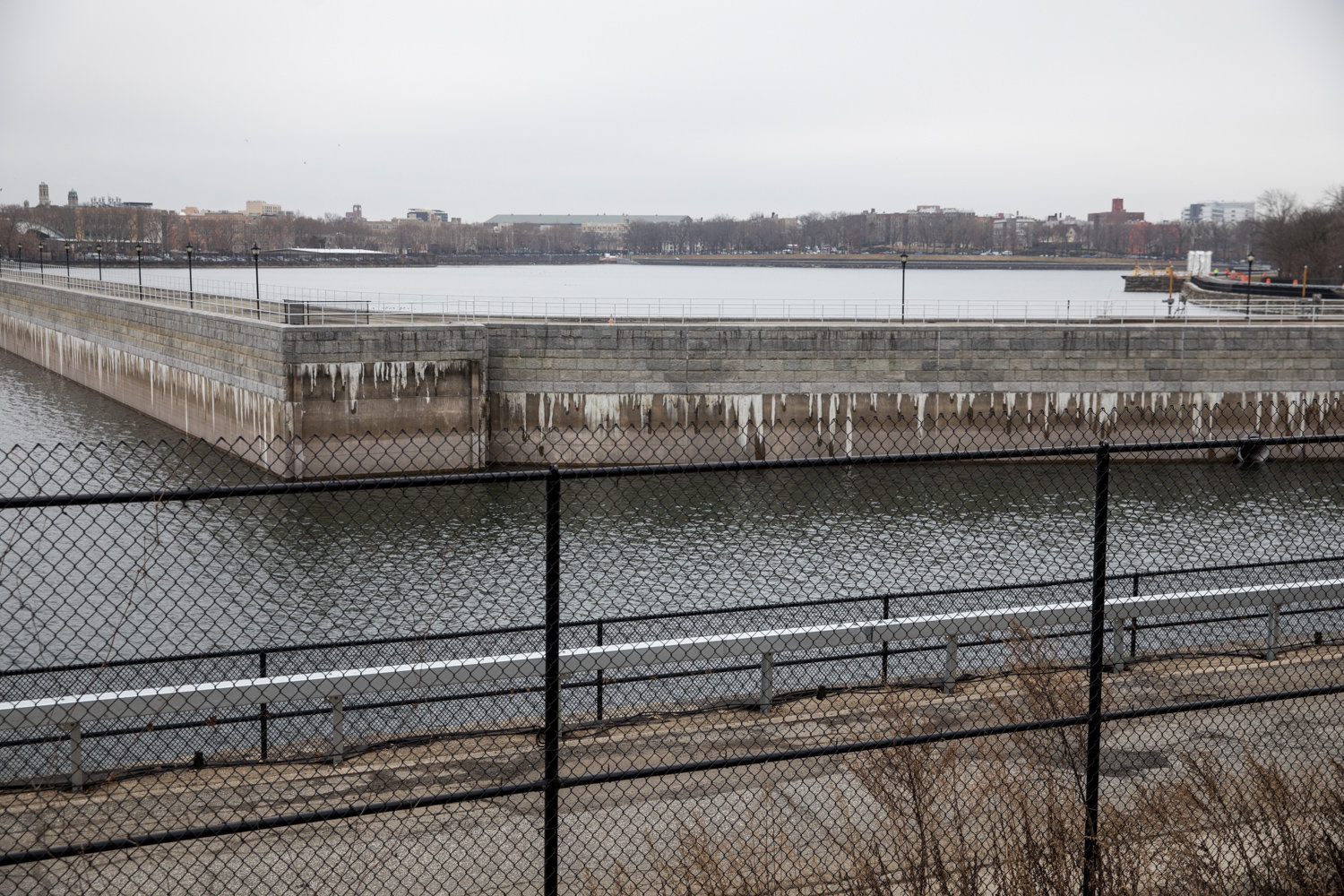 The Jerome Park Reservoir is an ongoing battleground between community members and DEP, although residents have notched a victory. The State Historic Preservation Office withdrew its endorsement of the agency’s project for the reservoir in a Feb. 13 letter.
JULIUS CONSTANTINE MOTAL
Previous Next
By HEATHER J. SMITH

The Jerome Park Reservoir saga continues. Last month, it looked like the north basin would stay full, countering plans by the city’s environmental protection department to leave it empty on a permanent basis. But the skepticism of neighbors living around the massive man-made body of water that separates Kingsbridge Heights from Norwood seems to have rung true, at least through one key state agency.

After public outcry became too loud, a DEP spokesman said last month the city would relent and keep at least some water in the north basin to maintain a nice view for neighbors. Some thought it was the end to their struggles. Others waited for the official word.

That word came in early February when DEP sent a letter to Community Board 8, stating it would keep water there about as deep as a typical swimming pool. That didn’t sit well with those on other side of the fence who wanted nothing less than the full 30 feet of water depth the reservoir was built to accommodate.

But then the State Historic Preservation Office stepped in. Jerome Park Reservoir is a registered national historic site, and to maintain that status, any construction or rehabilitation project must preserve its historic value.

In a Feb. 13 letter to DEP, the historic preservation office said it “failed to consider the larger impacts that this project scope might have on” other historic sites nearby, like DeWitt Clinton High School and the Amalgamated Houses — both eligible for inclusion in historic registers.

The DEP first approached the state historical agency in 2015 with plans to construct a barrier intended to keep birds away, as well as repairs on the reservoir’s east interior wall. State officials had no issues with that work, or even some of the future plan revisions over the next four years.

When DEP submitted plans to use sprayed concrete on the east wall instead of restoring the stonework last May, the city agency also included plans to keep the north basin dry.

Yet, that was still fine at the state level, with the historical agency finding of no significant impact. But the community wasn’t having that. Elected officials, neighborhood groups, Lehman College and the various schools surrounding the reservoir all pled with the state historical agency to revise its findings.

It seemed to have worked as state officials reversed their earlier opinion, and now concluded DEP’s plan would have an adverse effect on the neighborhoods around the reservoir.

But there’s another element to the change. In its letter to DEP, the state agency said it is uncertain how the city approached the project with respect to federal historic preservation law that prohibits use of federal money to adversely alter historic sites. If money used for the project came through the state health department, the state historical agency asked for more information on DEP’s process to follow federal guidelines.

Those federal guidelines could be what halts the reservoir project until the city can fully rework its construction plan, Bronx Council for Environmental Quality founder Karen Argenti said.

“If they don’t like the (historical agency) letter, then they could get back all the federal money that they use to do whatever they did,” she said. “They’ve accepted the federal money, so they have to accept what the state said in terms of re-evaluating things.”

The particular federal law could also require the city to restore and maintain the reservoir in a way that preserves its historical value, Argenti added. That would mean the city couldn’t use spray concrete on the walls, and it can’t drastically alter it to suit its use for emergencies at the Croton facility.

“I’d also like to see DEP’s master plan,” Argenti said. “Do they have a maintenance schedule? Because that would mean that we don’t have to worry about the reservoir’s walls falling apart.”

Calls to a DEP spokesman were not returned.

Locals celebrated the state’s reversal as a victory in a fight to preserve the reservoir that’s already spanned two decades.

A statement from Assemblyman Jeffrey Dinowitz’s office hailed the announcement as a breakthrough for neighbors who feel that city had ignored their concerns. And while it was a victory, the statement didn’t rule out DEP reviving the proposals, albeit in a different form.

Others believe the state’s stance and the possibility of federal rules coming into play will encourage the city to be more open with the community.

“I believe (DEP) are now forced to proceed with a new, more public-facing review process because of this decision,” said CB8 environment and sanitation committee chair Robert Fanuzzi. “I believe that the modified negative declaration had absented them from moral review. And I believe that this puts them back in a more rigorous public review.”