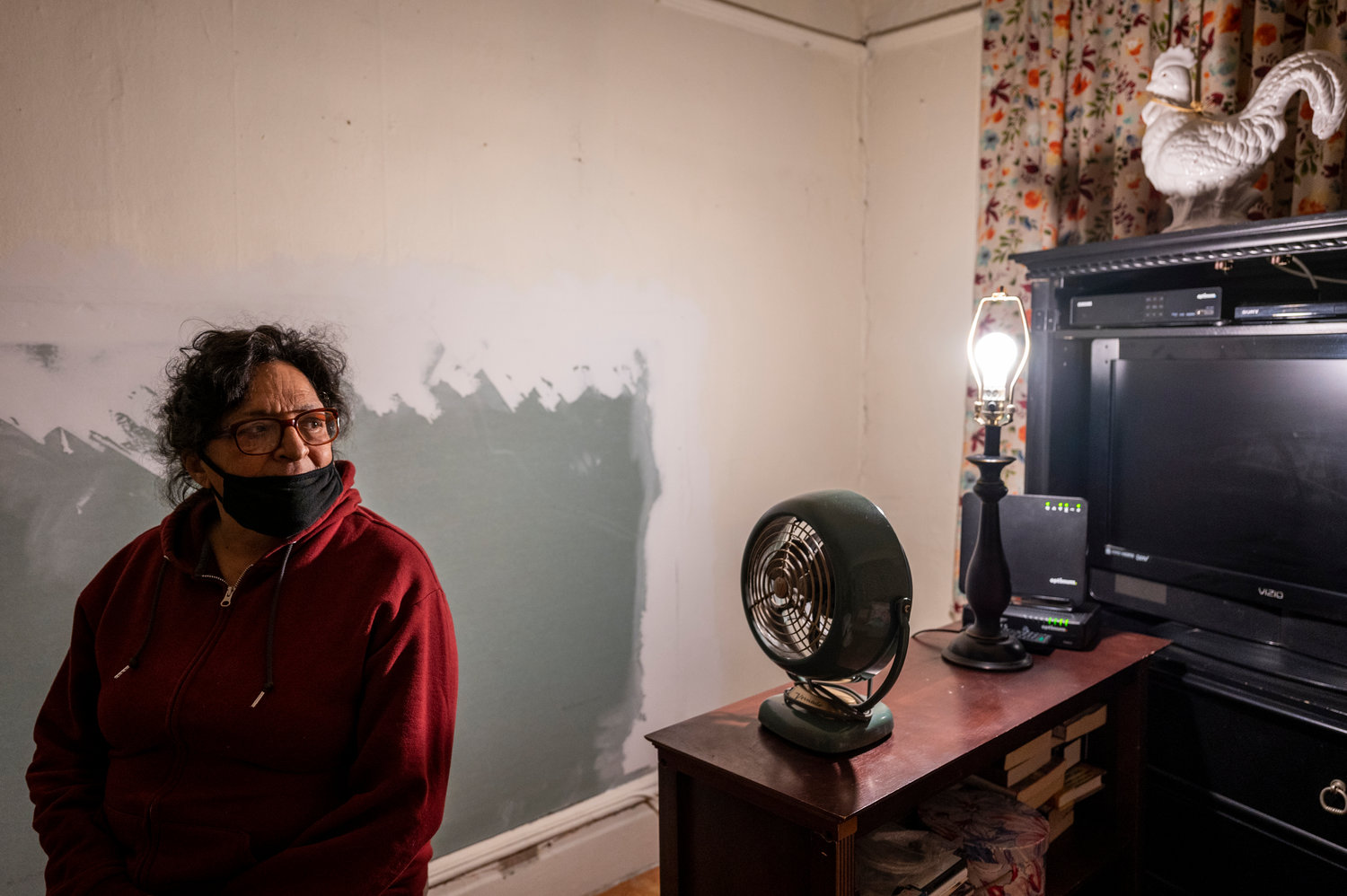 Regina Hall has lived at 3801 Review Place for 50 years, but says over the last few years, unwelcome guests from the rodent family have joined her. Even when a new landlord took over, Hall says the mouse infestation only got worse.
HIRAM ALEJANDRO DURÁN 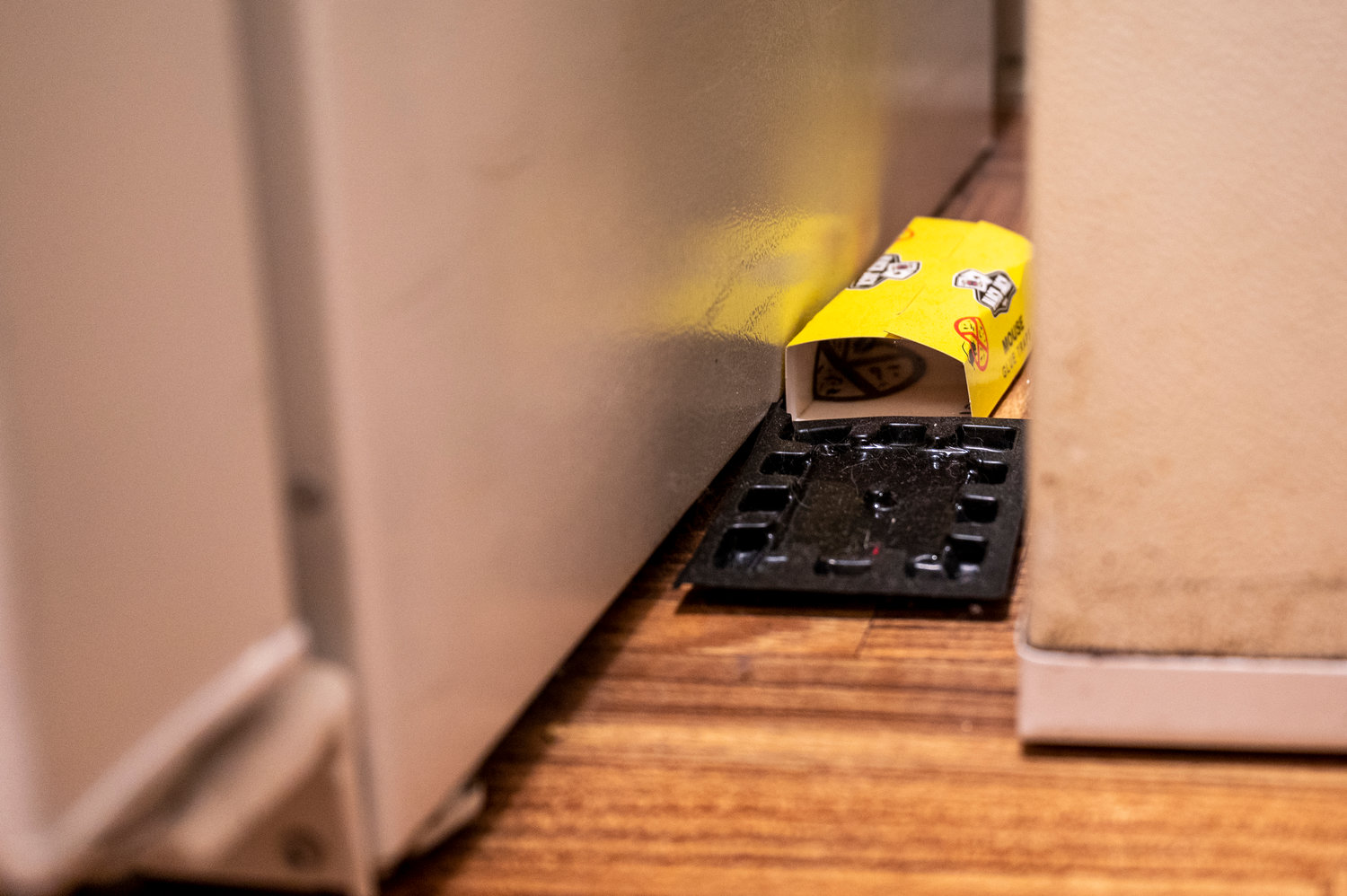 Because of a mouse infestation in her apartment at 3801 Review Place, Regina Hall has littered her floor with glue traps. She says her landlord has done little to stave off the mice in her apartment, although another neighbor says the landlord recently took steps to clear rats out of the basement.
HIRAM ALEJANDRO DURÁN 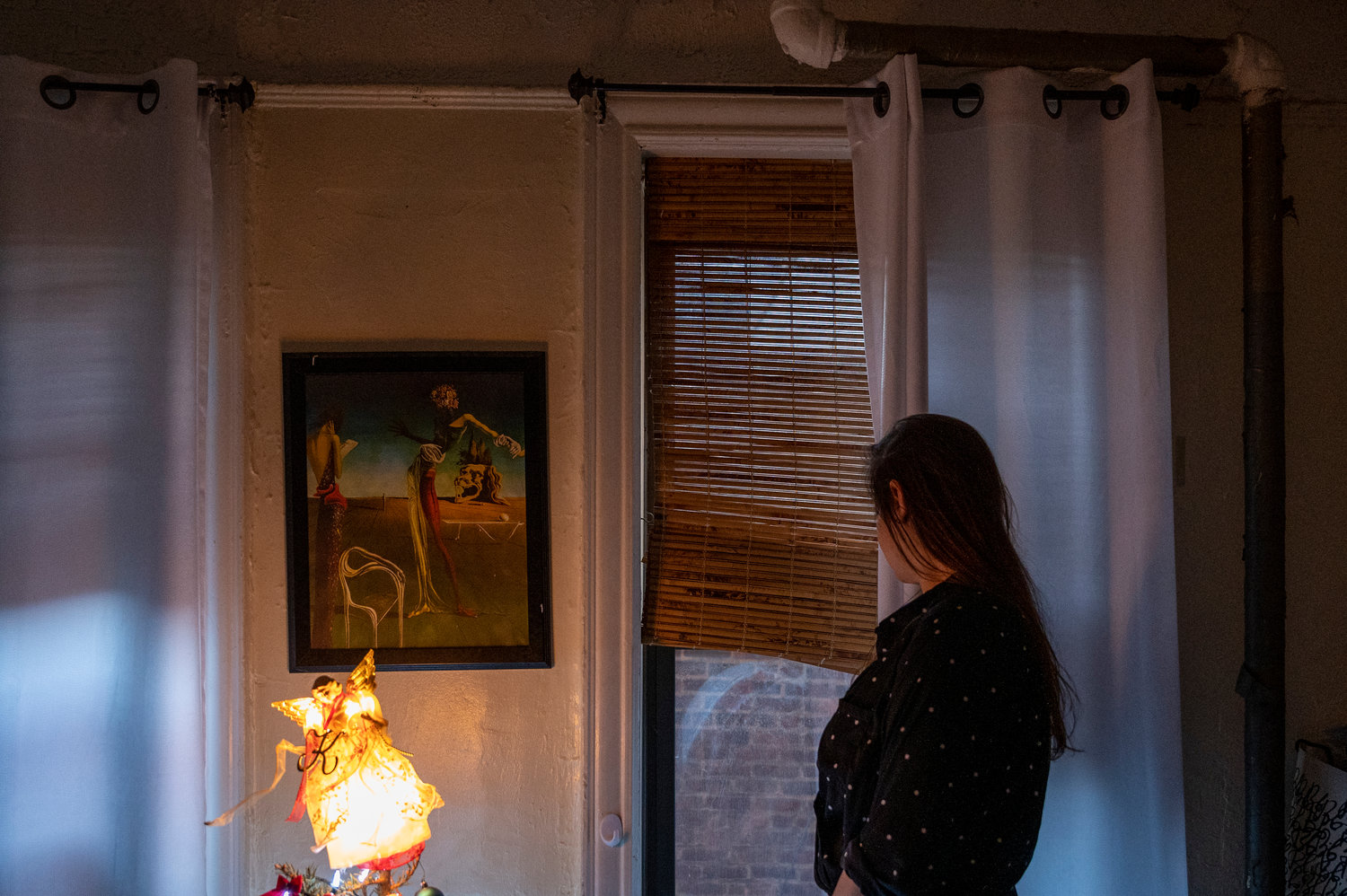 From her first-floor apartment at 3801 Review Place, Kenya Fernandez can hear rats squealing and running by in the outside garbage area. Hernandez has complained to the landlord many times about the mouse and rat infestations in the building — getting some results over rats, but not the mice.
HIRAM ALEJANDRO DURÁN 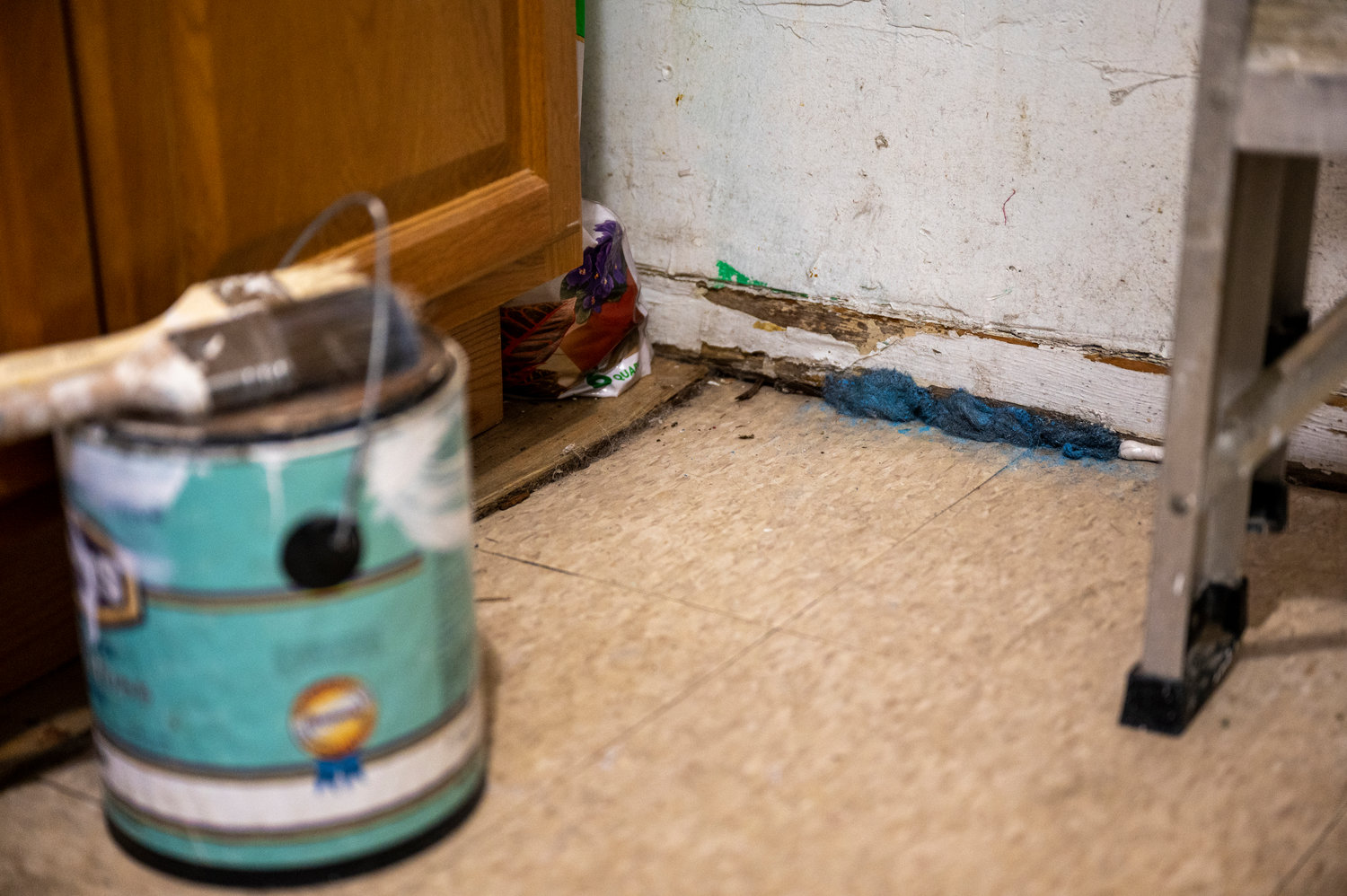 The superintendent at 3801 Review Place plugged the holes where rats crept into Kenya Fernandez’s apartment, but mice continue to be an issue.
HIRAM ALEJANDRO DURÁN
Previous Next

‘You literally hear them outside of your window all the time. You just hear the squeaks. Like you go to the bathroom to handle your business, and you literally think they’re inside your apartment.’”
— Kenya Fernandez
By ETHAN STARK-MILLER & HIRAM ALEJANDRO DURÁN

For years, Kenya Fernandez found living among mice in her 3801 Review Place apartment was something she just had to live with, despite pleas to her landlord to do something about it. But when a rat joined in on the visits a few weeks ago, Fernandez had enough.

“The night before yesterday, there was another rat, and it jumped at me in my kitchen, and I went berserk,” Fernandez told The Riverdale Press soon after her encounter. “I haven’t slept since. I’m going crazy.”

Fernandez says she reached out to the landlord many times, but all she’s heard in return is silence. She eventually closed the hole in her wall the rat used after begging for help from the building’s superintendent.

Fernandez has lived in the building for more than a decade, and from the very first day, rats were an issue — especially around the building’s garbage storage area and basement. When that area flooded late last year, Fernandez believes the water may have helped rodents find their way into the upper floors of her building.

The water has since been drained, which Fernandez hopes means an end to her rat encounters.

“I live on a ground-floor apartment, so you literally hear them outside of your window all the time,” Fernandez said. “You just hear the squeaks. Like you go to the bathroom to handle your business, and you literally think they’re inside your apartment.”

Seth Miller bought the century-old, 26-unit building through a limited liability corporation, but runs it through his Midtown-based Aegis Realty Management Corp., in 2014 for $4.4 million. Miller is no stranger to housing advocates, who have come after him about poor living conditions at 919 Prospect Ave., in Morrisania. State Attorney General Letitia James named Miller the Bronx’s worst landlord in 2016 back when she was still the city’s public advocate.

Tenants at 919 Prospect sued Miller for neglecting issues like rats and lead paint, according to reports. They claimed Miller didn’t want to fix anything, because that way he could push rent-stabilized tenants out. Miller ultimately filed for bankruptcy protection, and the court removed him from management, allowing needed repairs through a trustee.

But Miller’s exile ended last year, and 919 Prospect tenants claim he immediately reverted to his old ways of harassing them, filing a second suit shortly after.

When The Press called a listed phone number associated with Aegis Realty for comment, the person answering denied the number was still used by the company. Yet, a subsequent call connected a reporter to an answering service which identified itself as Aegis.

Back at 3801 Review Place, rats aren’t the only problem, Fernandez said. There are also mice, the rodents’ distant cousins.

“I’ve had mice in my apartment many, many, many times,” Fernandez said. “And that was always my issue to the landlord.”

One of Fernandez’s first floor neighbors, Regina Hall, said she’s also experienced a mouse infestation — a problem that has only gotten worse since Miller bought the building. Mice find their way in through Hall’s sink and from behind the stove. Her floor is covered with glue traps, but it doesn’t seem to be enough.

Hall, who’s lived in the building for 50 years, said the previous landlord used to at least bring in an exterminator to take care of the mice.

“I can’t sleep. I’ve been having nightmares,” Hall said. “Because I have a hole in my bedroom wall and I’m afraid something’s going to come out of there.”

The rats in the basement, Hall said, create a foul smell that wafts up through the floor of her apartment.

“I kept on buying stuff to take the smell away, but it smells so bad,” Hall said. “It’s from the rats that’s in the basement because they don’t take care of the garbage, and they have unruly tenants that don’t care.”

Someone living on the building’s top floor, who asked not to be named out of fear the landlord would retaliate, said he’s had a mouse infestation in the apartment he shares with his mother for the past few years, as well. They have holes throughout the apartment the landlord has yet to fix. Putting out glue traps only worked the first couple of times.

The tenant believes Miller is looking for reasons to kick out long-term tenants so he can replace them with people he could charge higher rents to. Not making repairs encourages long-term tenants like him paying lower stabilized rents to move out.

Still, any step is better than no step for Fernandez — even if there’s still a long road ahead to make 3801 Review Place livable again.

“There are improvements that are happening,” Fernandez said. “It’s unfortunate that it’s a little late. But better late than never.”