Richard Gilbert sent more than 100 op-ed pieces to The Press from the study in his Riverdale home.
File photo from 2006 by Stefan Cohen 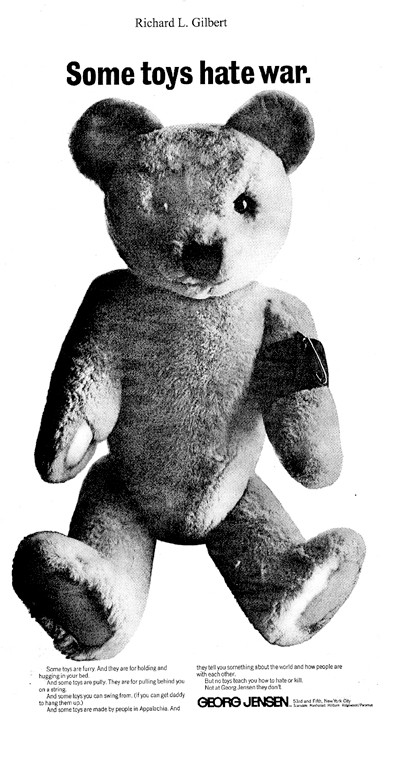 When this Gilbert-designed ad ran at the height of the Vietnam War it created a stir, but Georg Jensen, the advertiser, reported getting mostly positive feedback.
Previous Next
By Richard L. Stein

Richard L. Gilbert’s byline was often seen on “Point of View” columns in The Riverdale Press. In fact, one was published just three days before he died at home on Dec. 29 at the age of 92.

Mr. Gilbert was long retired from a successful advertising business and though he spent time in Florida every winter, Riverdale was his home. He used his communication skills to further causes like Riverdale Senior Services and to share his views on a wide range of subjects to the delight of liberal readers and the consternation of conservatives.

And Mr. Gilbert was not reticent about making suggestions to the publishers of this newspaper about improvements to advertising or editorial coverage, regularly sending notes on past weeks’ issues and freely offering encouragement and compliments.

His vision helped to shape the first of The Press’s annual Living in Riverdale magazines in 1997.

A man with a keen sense of honor and justice, Mr. Gilbert bristled when he was compared to Don Draper, the fictional lead character on television’s Mad Men series. Both were dapper and handsome World War II veterans who married beautiful fashion models and rose to the pinnacle of Madison Avenue. But that, said Mr. Gilbert emphatically, was where the comparison ended, “We didn’t drink all day, we didn’t have affairs, we had ethics.”

According to his autobiography, originally published by Behler Publications in 2008 as Marching Up Madison Avenue, Mr. Gilbert opened Gilbert Advertising in 1950 with more hopes than clients. One of his first, a sportswear company, had struck a T-shirt deal with Jackie Robinson, the first black player in baseball, and Mr. Gilbert recalled how his ads ran up against the prevailing racism of the day. He was star-struck by the great athlete, but “Outside New York City and its Brooklyn confines,” the book recalls, “Jackie was the constant target of thrown objects, bean balls and the most vicious verbal epithets.”

It would not be the last time Mr. Gilbert’s ads took positions that challenged accepted American attitudes, but they were always done with wit, style and the full compliance of his big name clients.

Among them were fashion designer Anne Klein, whose Gilbert-designed ads introduced not only the “American look” in women’s wear, but a new documentary style of advertising design with soft-focus, on-location photography made possible by new technology — the 35 millimeter single lens reflex camera.

His client list in the fashion world grew to include some of the best-known names in the business — from girdles and brassieres to America’s largest pajama company to plus size women’s dresses to After Six tuxedos to London Fog outerwear to Andrew Geller shoes.

Gilbert’s work for After Six included an ad that caused a minor international incident — and a lot of free publicity — by offering Russian Premier Alexi Kosygin a free tuxedo. “For you, we’ll make it up in red” was the irreverent tag line to wildly satirical copy. Among other reactions, Newsweek magazine, which ran the ad, received an official protest from the Soviet embassy and a stolid team of apparatchiks visited Gilbert’s office.

Looking for an edge

Looking for an edge in the competitive shoe business, Mr. Gilbert asked the New York Times if he could lock-in a large space for Andrew Geller on pages with no other advertisers. Here is how he describes what happened: “Sunday’s new ad was a suede-and-kidskin promotion, with shoes resting on the numbers of a roulette table under the headline ‘Put it all on the black.’ When I opened my Sunday paper, there was our Geller ad sitting alone… with no competing ads… We were smack in the middle of the obituary pages, with ‘Put it all on the black,’ no less.”

He called Geller to apologize, but he need not have worried — the ad turned out to be a big hit.

One apparel ad took on biblical proportions. A 1964 campaign for London Fog displayed the iconic raincoat in situations all over the world, but the agency nearly overstepped its bounds when it attempted to show Noah in a London Fog.

“The elephants are getting nervous. This better be the last take before they wreck the ark,” his book describes his photographer pleading as the sun dawned on a New York World’s Fair parking lot where the agency had done its best to faithfully recreate the entire boatload of animals — mostly borrowed from the fair’s African exhibit. Somehow he got the shot and London Fog’s founder, Israel Myers, was immortalized as Noah in magazine spreads across the country.

It was not until the early nineteen-sixties that Gilbert Advertising took on its first non-fashion client — champagne vintner Gold Seal — a company that grew, with Gilbert’s help, to include several other wineries, Denmark’s upscale Tuborg beer and Cold Duck, a sweet and sparkling wine (“Quack open a bottle”). The company’s spokesduck was decades ahead of his Aflack insurance counterpart.

Gold Seal was followed by other ready-for-the-Gilbert-treatment clients — Berlitz language schools, Guerlain perfume, Movado watches, the state of Israel, Dubonnet, Club Med, the Metropolitan Opera and even the New York Daily News among them.

The gold standard for ad agencies has always been automobile accounts and Mr. Gilbert wanted one. For better or worse the one he landed was French carmaker Renault. By the time it signed with Gilbert, its reputation was in shambles thanks to major quality control issues and a sketchy dealership and service network — Volkswagen had taken the lead among imports in America.

The Gilbert team believed that only a brash, shockingly original approach could revive the company’s prospects. Their unique ads apologized to Americans who had had bad experiences with the brand and begged readers to, at least, give Renault’s new offerings a test drive. The ads spurred a remarkable uptick in sales that continued through the company’s launch of Le Car.

Never one to shy away from controversy, in 1966 Mr. Gilbert became embroiled in an $8 million libel suit when he undertook to publish a response to a series of ads — run by the Police Benevolent Association (PBA) — decrying a ballot initiative to create a New York Police Department Civilian Review Board. He was outraged at what he considered to be scurrilous lies in the PBA ads and he rallied like-minded agency executives to co-sign a full page in the Times taking the union to task for its “appeals to passion, and the use of deceptive inflammatory statements.”

Within weeks, the union retaliated with a whopping suit, but the Appellate Division of the State Supreme Court quashed it, including in its finding, “The constitutional guarantees of freedom of speech and of the press apply as well to a paid commercial advertisement.”

Another ad, this one for a high profile client — Georg Jensen — engendered both controversy and pride for Mr. Gilbert.

The prestigious international silversmith was headed by Jorgen R. Jenk, a man with a social conscience who hired workers in Appalachia in 1969 to produce Teddy bears for sale in his flagship Fifth Avenue store.

With images of the Vietnam War on the nightly news as the Christmas holiday approached, Gilbert’s team put a black armband on Jensen’s Teddy bear under a headline that read “Some Toys Hate War.” Bears filled the stores windows and cards and posters were printed with the image. “I found myself feeling proud of the store, the ad and our profession,” he recalled.

Mr. Gilbert credits his father, Gus, a traveling salesman from Washington Heights, with igniting his creative spark and his sense of justice and his mother, Bertha, for her warmth and sensitivity.

Born on March 23, 1921, he was a graduate of DeWitt Clinton High School and City College (CCNY), where he was an editor of the school newspaper and the yearbook before the army drafted him in 1942.

Mr. Gilbert met his wife of 62 years, Marjorie, on a basketball court in Washington Heights. She passed away in 2011.

A brother, Sheldon, a son, Adam, daughter-in-law Emily and two grandchildren, Lily and Charlotte, survive Mr. Gilbert. His autobiography is available as an e-book, under the title I Was a M/Ad Man.