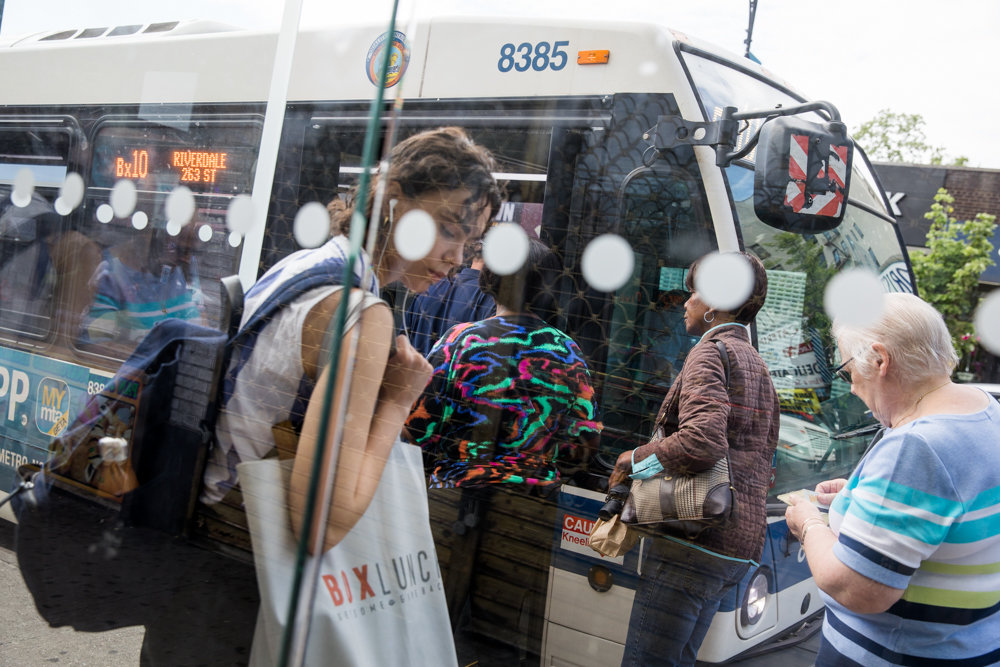 Commuters board a Bx10 bus bound for North Riverdale at West 231st Street and Broadway. Transit advocacy groups have made a series of demands for the Bronx bus network redesign, including increased bus speeds, 10 to 15 miles of new bus lanes, and better enforcement of traffic violations.
JULIUS CONSTANTINE MOTAL 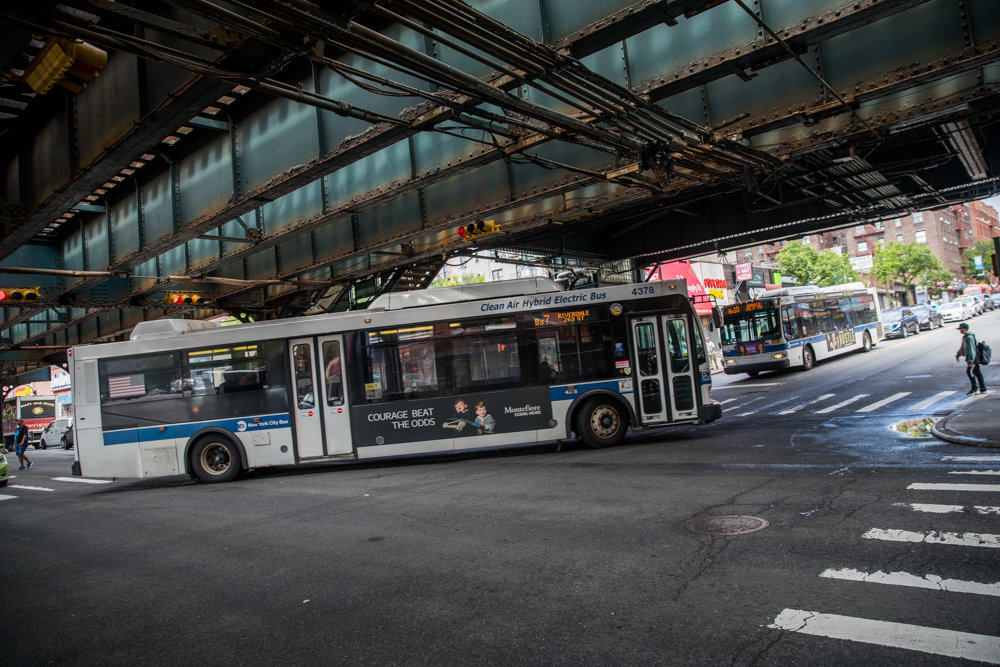 A Bx7 crosses onto West 231st Street from Broadway while a Norwood-bound Bx10 waits to cross. The Bronx has a beleaguered bus system, and transit advocacy groups are clamoring for a host of reforms to improve service.
JULIUS CONSTANTINE MOTAL 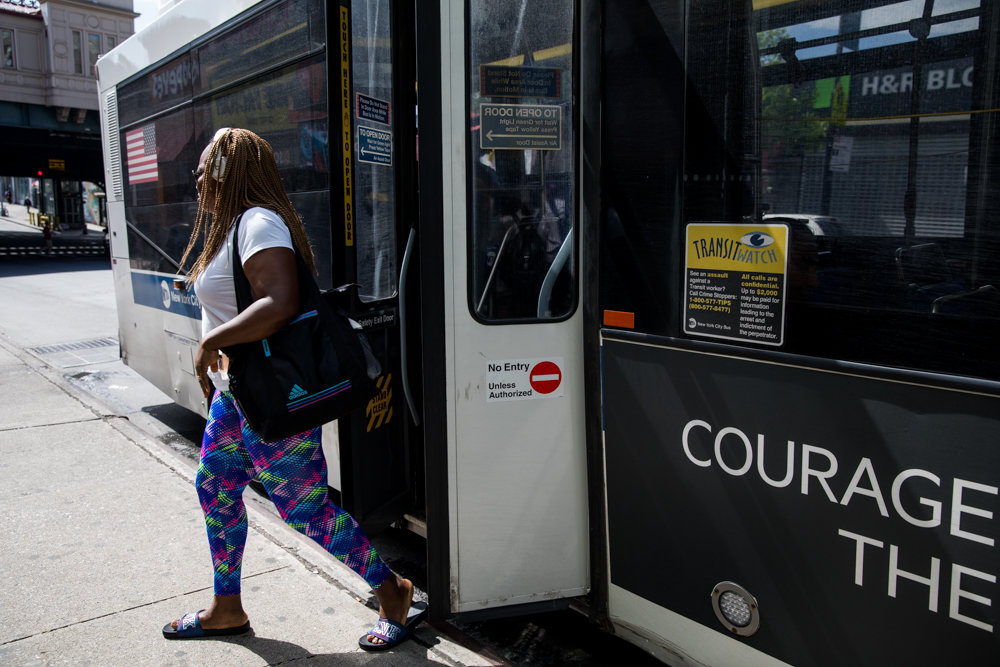 A commuter disembarks from a Bx7 bus at West 231st Street and Broadway. Ahead of a bus network redesign for the borough, transit advocacy groups have issued a list of demands they feel will improve service for commuters in the Bronx.
JULIUS CONSTANTINE MOTAL 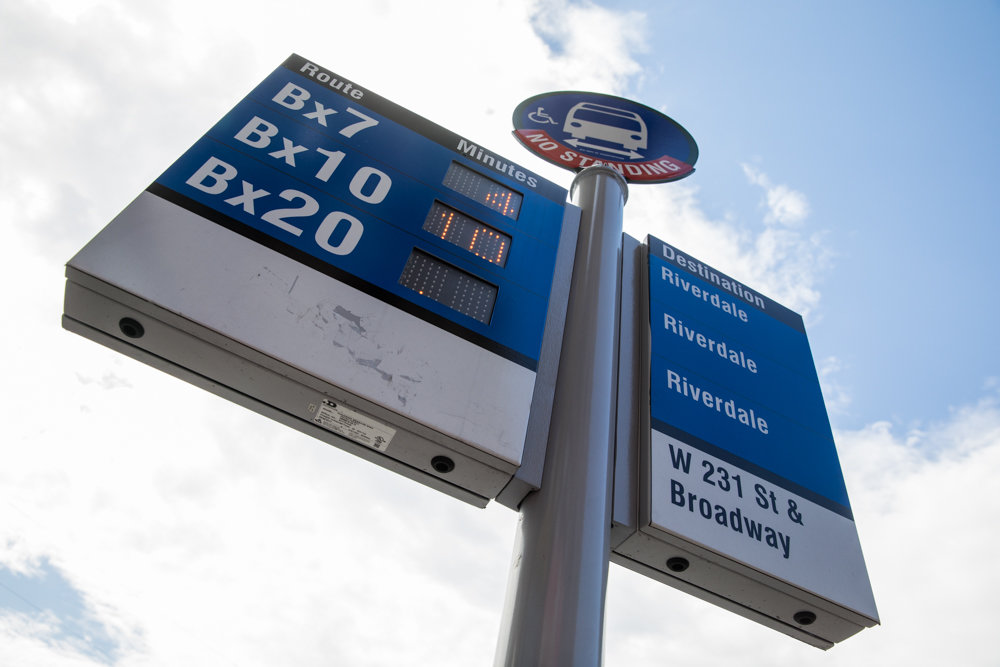 A countdown clock displays how long until the Bx7, Bx10 and Bx20 buses arrive at West 231st Street and Broadway. Transit advocacy groups have called on the MTA to speed up the borough’s bus speeds in order to cut down on wait time.
JULIUS CONSTANTINE MOTAL 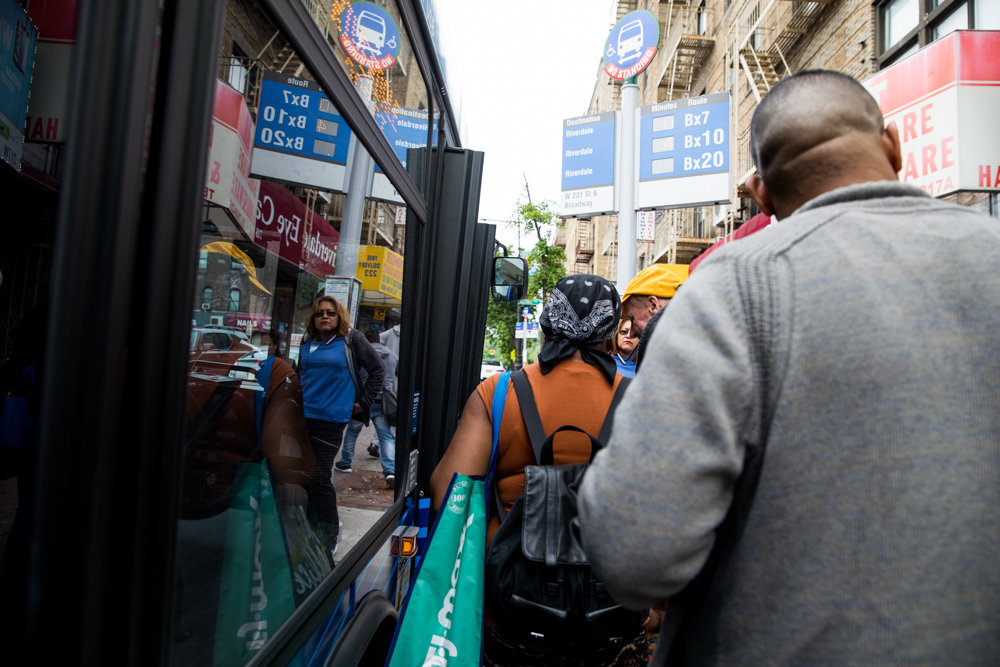 Every morning around 8:30, Eileen Remor steps onto the Bx7 bus at West 256th Street for a commute that takes her through Riverdale, down the hill, and finally to West 231st Street. There she hops off, making the quick walk toward Broadway to climb the steep stairs to the 1 train, which will finally get her to the Upper West Side.

When people complain to Remor about subway service, she asks them if they’ve ever ridden the Bx7. She describes herself as “endlessly frustrated” with the bus route’s poor service and frequency. In fact, it’s the only thing Remor ever complains about to local officials. A couple years ago, Remor made a spreadsheet tracking the wait times between each Bx7 as compared to the Bx10, which shares an identical route until West 239th Street.

“There’s absolutely nothing to complain about living in Riverdale,” she says, “except for the Bx7 bus.”

It’s time for the Metropolitan Transit Authority to change or shorten the route, Remor says, or split the northern Manhattan section of the route from the Bronx section to improve travel times.

She’s not alone. Advocates across the Bronx are calling for more efficient routes and increased service ahead of the MTA’s planned redesign of the borough’s bus network. A draft of the plan is expected to be made public by the end of May or the beginning of June, according to a timeline on the MTA’s website.

Bus riders and advocates rallied May 16 outside Hostos Community College in the South Bronx demanding the MTA’s draft proposal aim to reach goals like more bus lanes, more frequent service, and equitable access for current and future population centers. The rally was organized by the Bus Turnaround Coalition, which includes advocacy groups like the Straphangers Campaign, Riders Alliance, TransitCenter, and Tri-State Transportation Campaign.

Stephanie Burgos-Veras, a senior organizer for Riders Alliance, spoke at the rally about how bus routes were designed years ago for a much different Bronx population. The MTA should focus on service to areas of the borough with growing populations or areas where increased travel will soon be necessary, Burgos-Veras said, like the proposed Mott Haven jail location.

“We are expecting an ambitious and bold plan,” Burgos-Veras said. “A plan that takes into consideration where riders need to go, where we’re trying to get around, and making sure that we’re reflecting the needs of the Bronx today, which are very different than what it used to be 50 years ago.”

Five decades ago, Assemblyman Jeffrey Dinowitz rode the bus as a kid from Kingsbridge Heights to his aunt and uncle’s home in Flushing. Back then, he’d take the Bx20 to West Farms Square, where he would transfer to a Queens bus.

“You know what’s changed about that bus in the past 50-plus years?” Dinowitz asked at the May 16 rally. “The number. It’s now called the No. 9 bus, that’s all that’s changed as far as the bus route.”

In 1984, 15 Bronx bus routes were renumbered, but the routes themselves were left virtually unchanged, including what is now known as the Bx9. The Bx9 route was nearly identical to the streetcar it had replaced in 1948, according to The New York Times, serving businesses and a community that is nothing like it was just after World War II.

The Bus Turnaround Coalition released its annual ratings last March of every local bus line in the city. All routes in the 81st Assembly District got either a D or an F letter grade, which was unsurprising to Samantha Peller, a Riders Alliance volunteer.

Peller rides the Bx10 or the Bx20 to Broadway from West 232nd Street and Henry Hudson Parkway each morning. When she moved to Spuyten Duyvil two years ago, Peller thought the quality of life would be better than living in Manhattan. In some ways, it was. But not when it came to the buses.

“It was just the biggest headache in the world taking those buses,” Peller said. The Bx10 and Bx20 come too infrequently. One time last winter, instead of waiting in the cold for the next bus to come after 20 minutes, Peller took off running with bags of groceries after the bus she just missed by seconds. She tripped, fell, and needed physical therapy to handle her injuries.

“If I didn’t catch that bus, I was going to either have pay the Uber up the hill out of pocket, or wait 20 minutes in the cold,” Peller said. “I could’ve waited, but you kind of wear down after awhile.”