MTA proposals would cut out off-peak buses to Manhattan 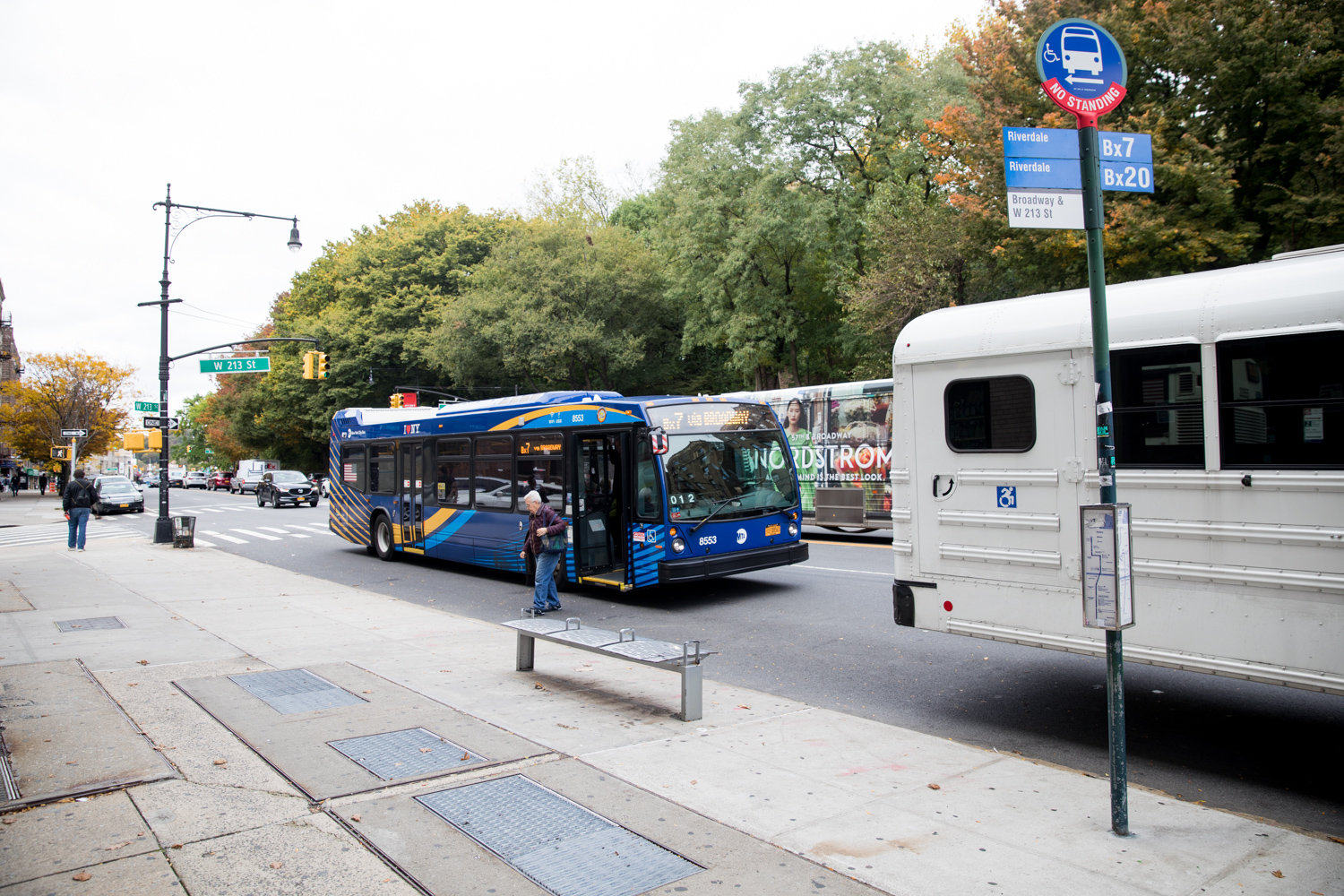 A Riverdale-bound Bx7 bus stops at West 213th Street and Broadway, a stop that will disappear if the Metropolitan Transportation Authority’s redesign of the borough’s bus network comes to fruition. A total of 13 stops are slated to be removed from the Bx7 route.
JULIUS CONSTANTINE MOTAL 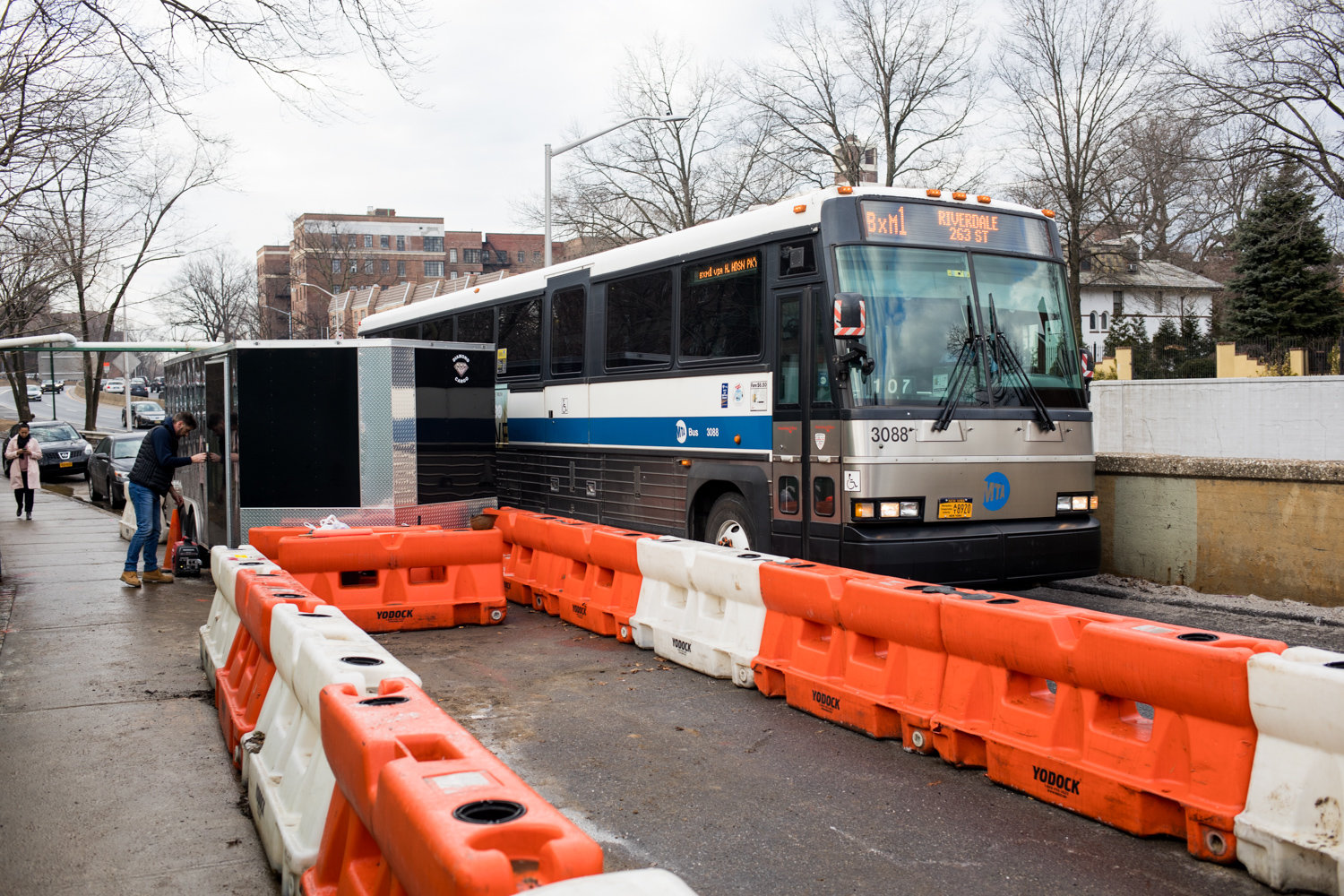 Some of the more significant changes to buses in the northwest Bronx affect express buses, which will have significantly curtailed Manhattan-bound service on weekdays and weekends.
JULIUS CONSTANTINE MOTAL / File 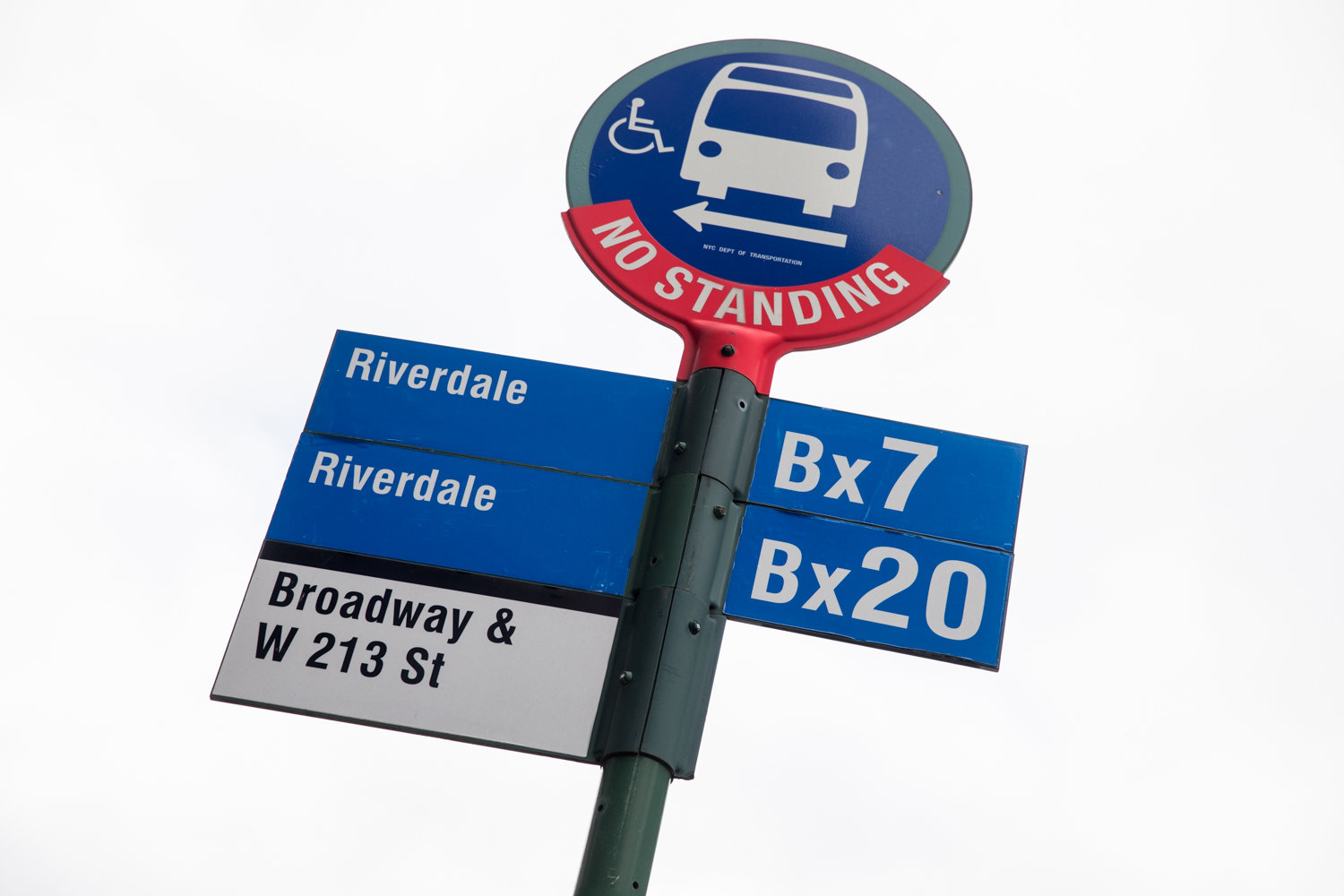 While the proposed changes to the Bx7 bus route are not as drastic as other lines in the borough, the MTA plans to remove 13 stops from the route, including this one at West 213th Street and Broadway.
JULIUS CONSTANTINE MOTAL 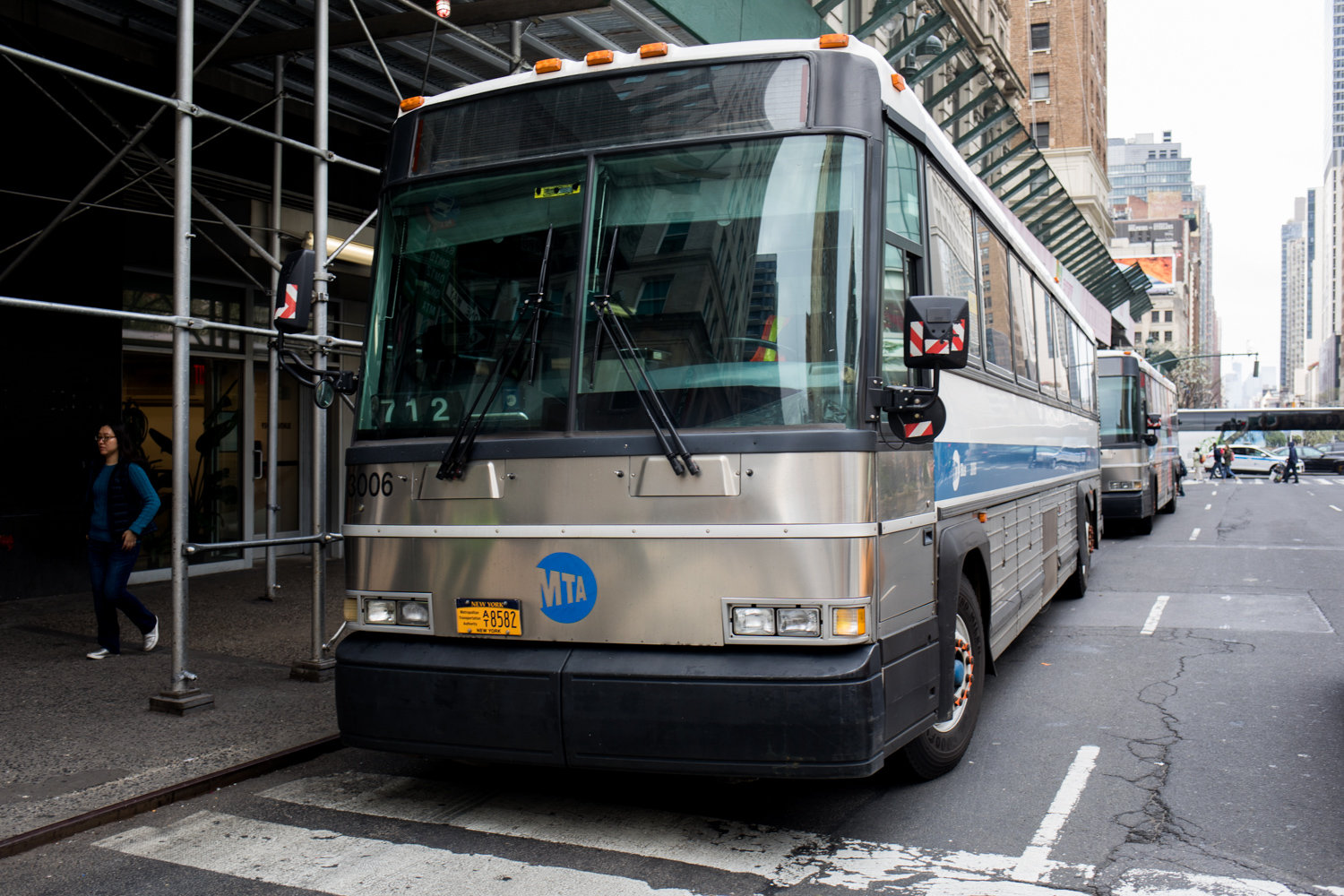 Going to the city in the plush comfort of buses like the BxM1, BxM2 and BxM18 will become impossible in the late afternoon and evening hours if the MTA gets its way in stopping Manhattan-bound service early.
JULIUS CONSTANTINE MOTAL / File 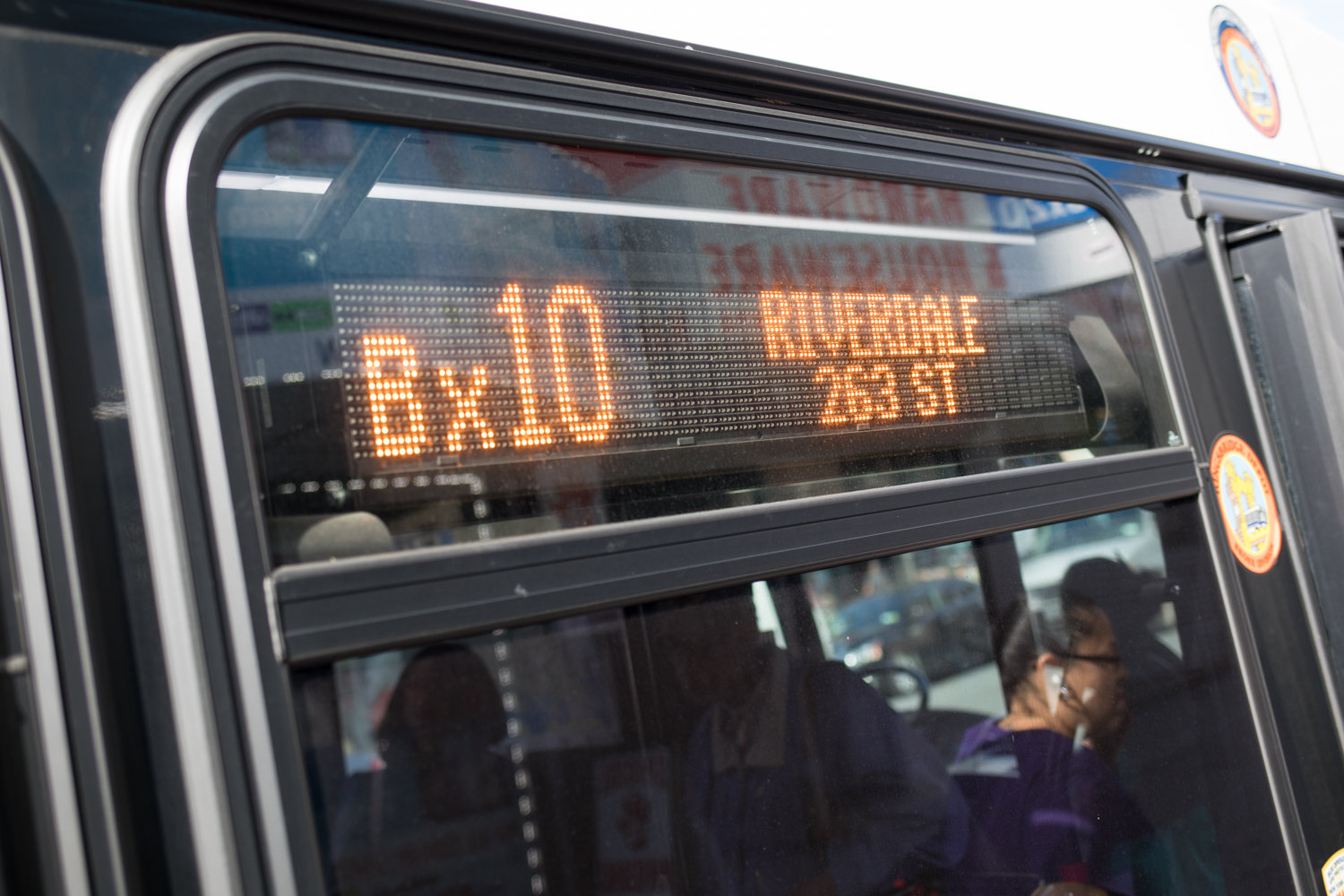 The Bx10 bus comes out mostly unscathed from the MTA’s redesign plan, with only two stops proposed for removal.
JULIUS CONSTANTINE MOTAL / File
Previous Next
By KIRSTYN BRENDLEN

It’s something Andy Byford has said for months. Bronx buses are some of the slowest in the country, averaging speeds in the borough equivalent to a brisk walk.

That’s why the Metropolitan Transportation Authority’s bus redesign plan for the Bronx is so important to the New York City Transit Authority president. But since its unveiling last week, reviews have been mixed at best.

And for anyone depending on the express bus service of lines like the BxM1, BxM2 or BxM18 — the response is pure outrage. Under the MTA’s proposed restructuring plan, express service will be severely cut, catering the lines more to commuters than simply to people who hope for a fast, above-ground trip into Manhattan.

“I moved to Riverdale because I commute to and from Manhattan every day, oftentimes during off-peak hours,” regular express bus rider Vittorio Bugatti said. “I will take the last bus of the evening on Sunday evening. The train is often knocked out, and that is a very quick alternative. No transferring or anything.”

But under the proposed changes, southbound service on the BxM1 — which runs from North Riverdale to East 34th Street and Lexington Avenue — will end at 4:45 p.m., on weekdays, while the BxM2 — which runs to 34th Street and Seventh Avenue — ends at 3. The BxM18 would run southbound to Broadway and Battery Place at 5:45 and 7:45 a.m., returning northbound back to Riverdale Avenue and West 261st Street at 4:15 and 7:15 p.m.

Pushing against the wind

Bus service is already frustrating, Bugatti said, citing regular missed or late express buses as well as poor information about when — or if — those buses will arrive. The cuts mean those still relying on that service are left without a fast route, especially when they’re coming home from work in the evenings.

“This service is not exactly cheap,” Bugatti said. “It’s $13.50 every day. They call it a premium service, but we’re not getting that.”

It’s because of those problems Bugatti founded a Facebook group focused on express bus advocacy, where commuters commiserate on their shared experiences using the buses while fighting for better service.

“The main reason why I started the group was because there was a pattern a couple of years ago where you started to see lots of missing trips,” Bugatti said. “The BxM2 runs roughly every half hour in the morning, so when there’s no bus, you’re stuck waiting for another half an hour, and it makes people late for work.”

Many transit observers expected the vast majority of changes to the bus network to affect local routes, which Byford has been the most vocal about during various presentations he’s made about the redesign plan. Winding routes, traffic, and a lack of infrastructure like dedicated bus lanes or advanced traffic signals all contribute to the snail’s pace of buses in the borough, according to the transit executive.

But while MTA has branded the plan a “final plan,” it’s not really quite final. The MTA is scheduling community meetings around the Bronx to discuss the changes, and what might be modified ahead of a wide-scale adoption.

Speeding up the buses

Because bus speed averages between 3 and 7 mph in the borough, the MTA looked at a variety of ideas including increasing bus frequency, creating more direct routes, and developing better spacing between bus stops — code for eliminating such stops.

Buses in the southern and eastern parts of the borough saw significant change, but those serving the northwest side of the Bronx will move forward with few changes. The Bx1, Bx7, Bx9 and Bx10 all run every 15 minutes or more frequently on weekdays, according to the report, and that will continue. The Bx20 — which runs only at peak times — also will maintain a roughly every-15-minutes schedule between 7:30 and 9:00 a.m., between and 3:45 and 8 p.m. on weekdays.

The routes remain mostly unchanged as well with relatively few stop removals. A stop near 2736 Henry Hudson Parkway serving both the Bx10 and Bx20 will be removed. The Bx9 will lose two stops along Broadway, at Tim Hendrick Place and West 236th Street.

Carol Radel depends on the BxM2 each day, but worries what cuts to evening service will do not just for those working in the city, but others who might not have many other options to get around.

“It’s going to be an inconvenience, but I can get around,” she said. “Riverdale in general, for people with limited mobility and seniors, it’s going to be horrible.”

There are some other options available as well like the Metro-North, Bugatti said. But returning uptown will require commuters to double back from Grand Central. The 1 train is frequently down on weekends and has few elevators, making it difficult or impossible to access for people with mobility issues.

“I’m afraid if these changes actually happen, a lot of people are going to be shut in,” Radel said. “Especially in Riverdale, where there’s so many seniors. If people can’t come visit them, if they can’t come to a show or something, it’s very isolating.”

Radel also is concerned about another demographic not talked about a lot with the proposed changes — the bus drivers themselves. Although they’re not responsible for changes, they’re the ones who get the brunt of rider anger.

If the schedule changes weren’t enough for express buses, routes are changing, too. For example, the BxM18 will no longer travel down Fifth Avenue, instead being redirected to the Henry Hudson Parkway to avoid the congestion of local streets. The BxM2 will take a similar route. That means that some uptown stops along Central Park will be eliminated.

The BxM3 will still travel down Fifth Avenue from Yonkers, as will the BxM1.

Express riders aren’t accepting these changes quietly. In fact, they’re not accepting them at all. Many already have started protesting the service cuts online, and are organizing to attend community meetings once the MTA starts rolling them out.

Bugatti is one of the leaders of that movement, putting together a flyer informing express riders of the changes, and encouraging them to contact their local elected officials to voice their concerns.

“It’s definitely a quality of life issue,” Bugatti said. “We have to really push and petition.”