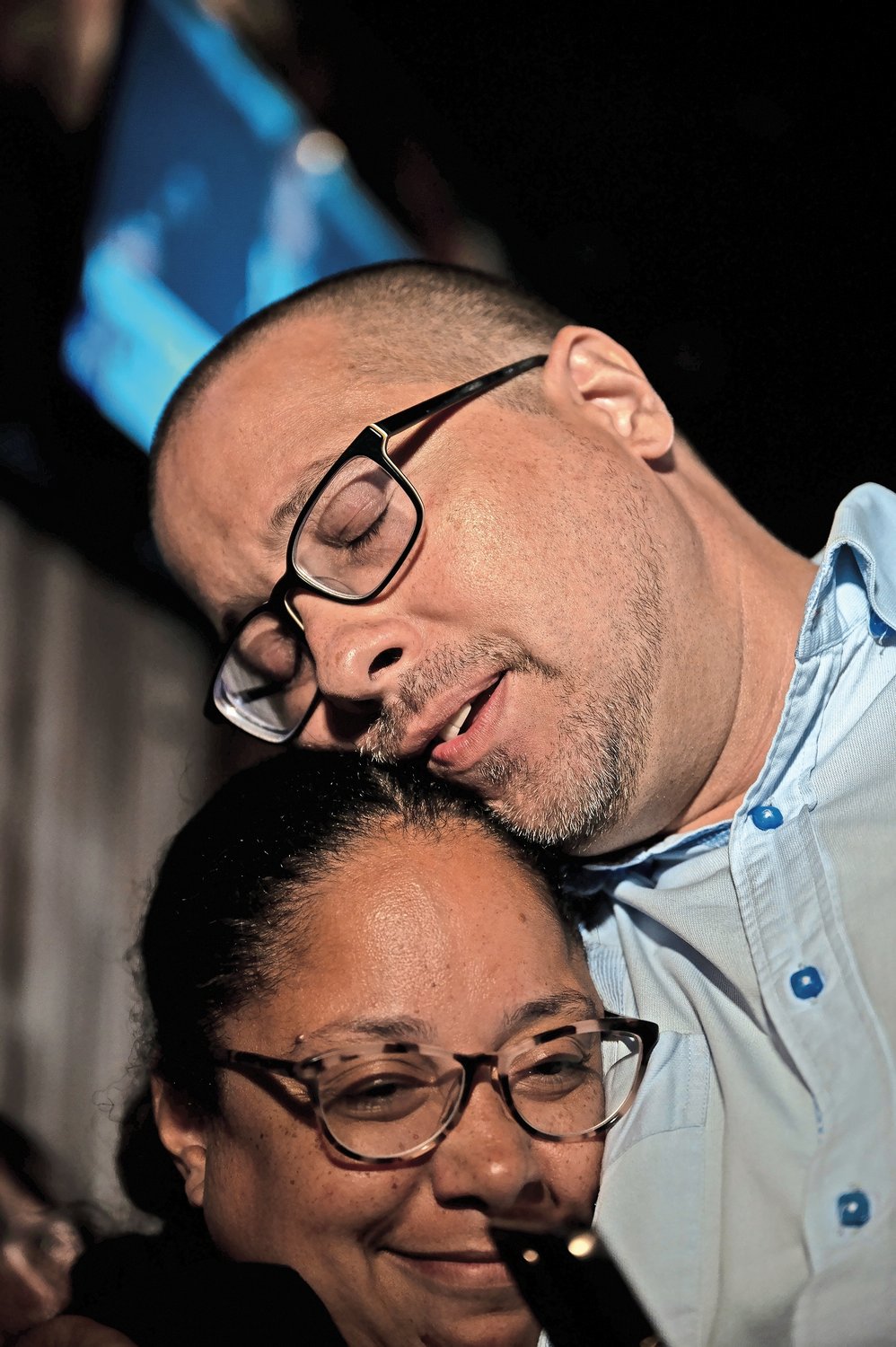 State Sen. Gustavo Rivera breathes a sigh of relief, hugging an old friend at the Bronx Ale House in Kingsbridge Tuesday night. He staved off a challenge from Miguelina Camilo to continue his long tenure in Albany’s upper chamber.
Hiram Alejandro Duran 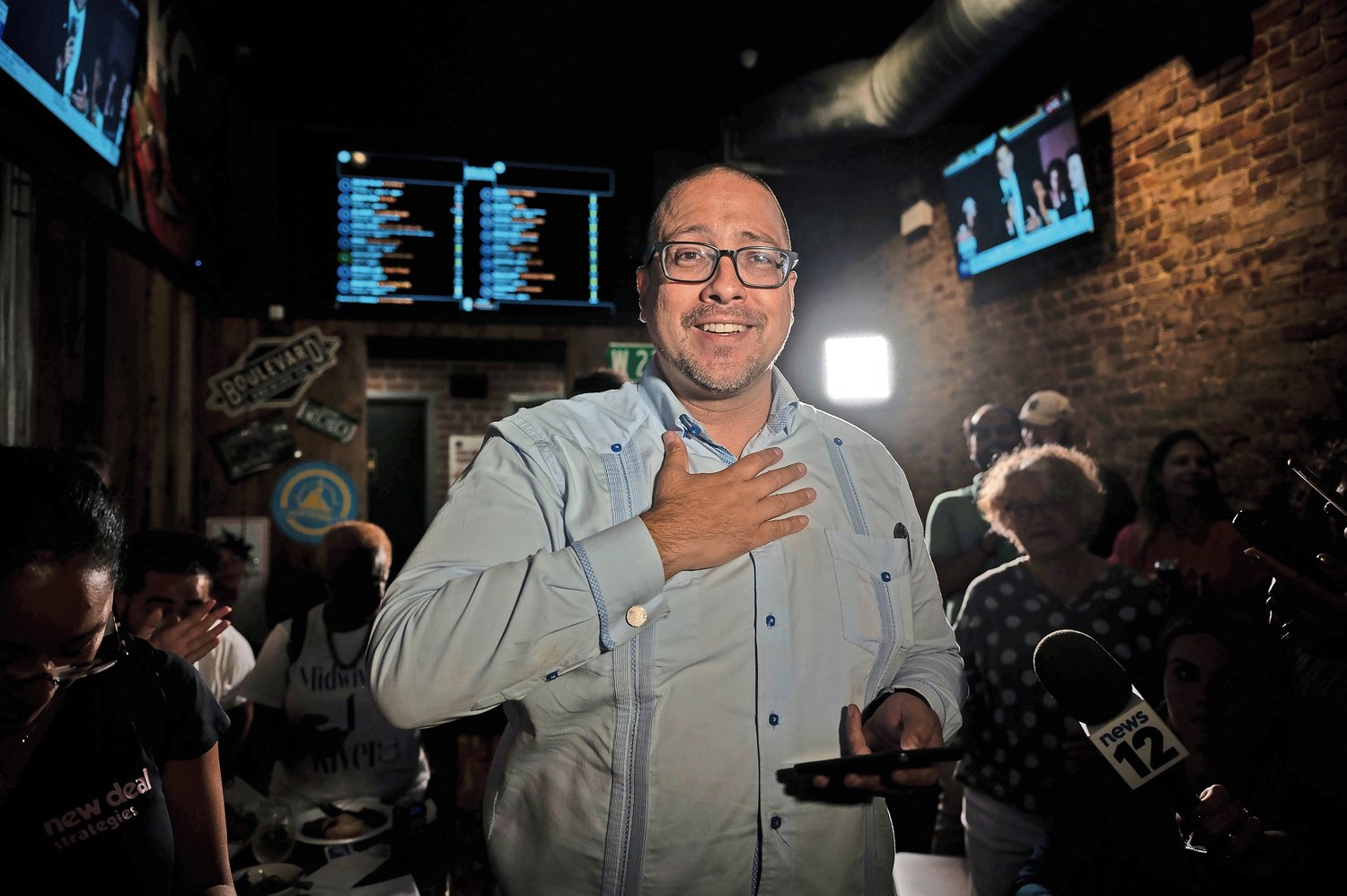 State Sen. Gustavo Rivera delivers an impassioned speech at the Bronx Ale House in Kingsbridge on Tuesday night after defeating Miguelina Camilo in the Democratic primary to keep his seat. He thanked his campaign workers, family and those who endorsed him.
Hiram Alejandro Duran 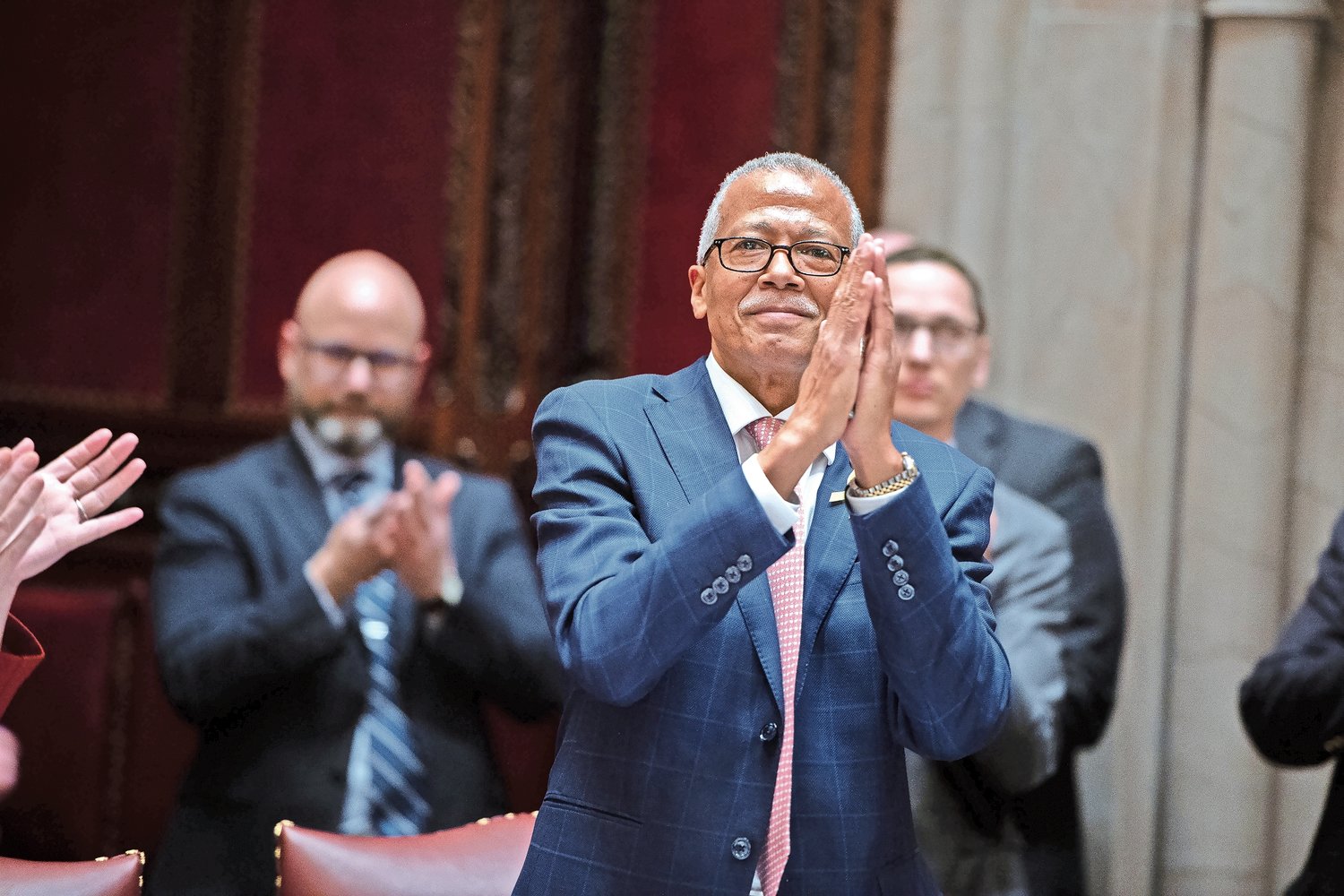 Despite its best efforts, the Bronx Democratic Party was unable to push Gustavo Rivera out of his state senate seat. With nearly a five-point lead, the embattled senator claimed victory over party-backed Miguelina Camilo on Tuesday night in the Democratic primary for the new district 33.

In a prepared statement, his campaign said: “Against a flood of special interest money — from real estate, from charter schools, and from right wing Trump donors — and against every effort by the Bronx Democratic Party machine, we prevailed.

“And we prevailed because Bronxites know that the Bronx is not for sale. I am proud to declare victory in tonight’s primary. Now, we need to unite as Bronx Democrats in the general election and keep up the fight for working families.”

As of press time, nearly 10,500 residents voted. However, absentee ballots are still being counted.

Rivera praised and thanked labor unions and fellow progressive electeds for his win despite the attacks from super PACs that used millions of dollars to defeat him.

“Sen. Rivera faced over a million dollars in outside spending from corporate interests, including the real estate industry and the charter school lobby” according to a statement he released around 10 p.m.  “And despite being heavily outspent, he won the primary election with the support of labor, elected officials like U.S. Reps. Alexandria Ocasio-Cortez, Jamaal Bowman, Nydia Velazquez, U.S. Sen. Elizabeth Warren, and progressive groups like the New York Working Families Party. “

Even though he came out on top, Rivera faced significant opposition from Camilo, with her support from the Bronx Democratic Party, mayor Eric Adams and the two local congressmen.

In the district 31 race, Robert Jackson held onto to his senate seat despite the aggressive challenge he faced from first-time candidate Angel Vasquez, who had the might of U.S. Rep. Adriano Espaillat behind him.

On the night of the primary, with 85 percent of the votes counted, Jackson took home about 8,000 votes, or 55 percent, against Vasquez’ more than 5,100 votes, or 35 percent.  Francesca Castellanos got about 5 percent and perennial candidate Ruben Dario Vargas got the rest. As of press time, more than 14,000 votes were counted.

“Four years ago, Robert Jackson helped lead a movement that shocked the state, wiped out the IDC, and brought real, progressive change in Albany,” said Richard Fife, Jackson campaign spokesman. “This year the special interests poured hundreds of thousands of dollars into this race to defeat him. But Robert again proved that ordinary people working together driving a cause is still the most powerful force in our political process.”

Fife added that “today the people’s voices — parents, teachers, seniors, immigrants, progressive activists and those struggling to get by — were heard.”

Camilo’s campaign said Tuesday night they would not comment until all the votes were in.

Her support wasn’t just political, it was financial, too. As the primary drew closer, her campaign coffers began to swell. In the latest campaign filing report, Camilo raked in more than $100,000 in contributions, compared to Rivera’s $73,000. Notable contributions include $10,000 from Assemblyman Jeffrey Dinowitz’s campaign, $7,500 from Robert Granieri of Jane Street Capital, and $7,500 from Jay Jacobs, chair of the New York State Democratic Party.

Camilo’s challenge to Rivera was also buoyed by two super PACs, which cannot coordinate with campaigns but are not limited by more traditional political spending caps. According to their latest disclosure reports, pro-charter school New Yorkers for a Balanced Albany and pro-police Common Sense New Yorkers spent more than a combined $300,000 in advertisements, polling costs and mailers to tip the scales in her favor.

Just days before the primary, residents of the district were bombarded with flyers, television and newspaper ads as well as phone calls, some of which likened the senator to an antisemite for bills had voted against in the legislature some seven years ago. Concomitantly, there were digital ads on social media praising Camilo.

Rivera, as well as several other local political groups, called on Camilo’s campaign to denounce the outside spending, which she declined to do.

Despite that momentum and support, she was unable to upset a lawmaker who had represented a significant portion of the new district throughout his 10 years in office.

Still, even in defeat, the first-time candidate was proud of her campaign.

Yet, as The Riverdale Press reported, Rivera does not live in the district any longer. With his victory all but assured, his main focus now will be finding a new place in the district he will soon come to represent.

Jackson holds
onto his seat

This was no easy win for Jackson. Soon after Vasquez launched his campaign, several other establishment politicians began lining up behind him — including Espaillat, who is known to largely support other Dominican, candidates.

He’s also known to want Jackson out of office, or at least that’s what Jackson would have you believe. “They want me out,” the senator told NY1 earlier this month. “Because they see me as the one person in northern Manhattan that can challenge Adriano. And Adriano does not own upper Manhattan.”

Back in 2014, Jackson took on Espaillat — who is one of the most powerful political players in upper Manhattan and the Bronx — when he was a state senator, losing narrowly in the primary.

Vasquez’ campaign was also buoyed by super PAC spending. As of Sunday, the pro-charter New Yorkers for a Balanced Albany threw more than $70,000 into the race in the hopes of ousting Jackson. Vasquez, as The  Press first reported, is a board member of a charter school in Harlem.

On the flip side, there were factors that may have held Vasquez’ candidacy back, most notably his ties to the Independent Democratic Conference.

In 2017 and 2018, Vasquez served as Marisol Alcantara’s chief of staff while she was in the senate. Alcantara, soon after winning her 2016 primary, joined the IDC, which was a group of legislators who often sided with Republicans in the senate to bolster the GOP’s power.

Jackson would go on to take her seat in 2018, a victory fueled in part by a wave of anti-IDC sentiment that was sweeping through the state at the time.

Jackson wasn’t without friends of his own in this race. He had the support of the Working Families Party, the United Federation of Teachers and Sen. Gustavo Rivera, who himself faced a tough primary.

In the end, neither the support from the establishment nor the super PAC spending was able to hoist Vasquez into the senate seat.