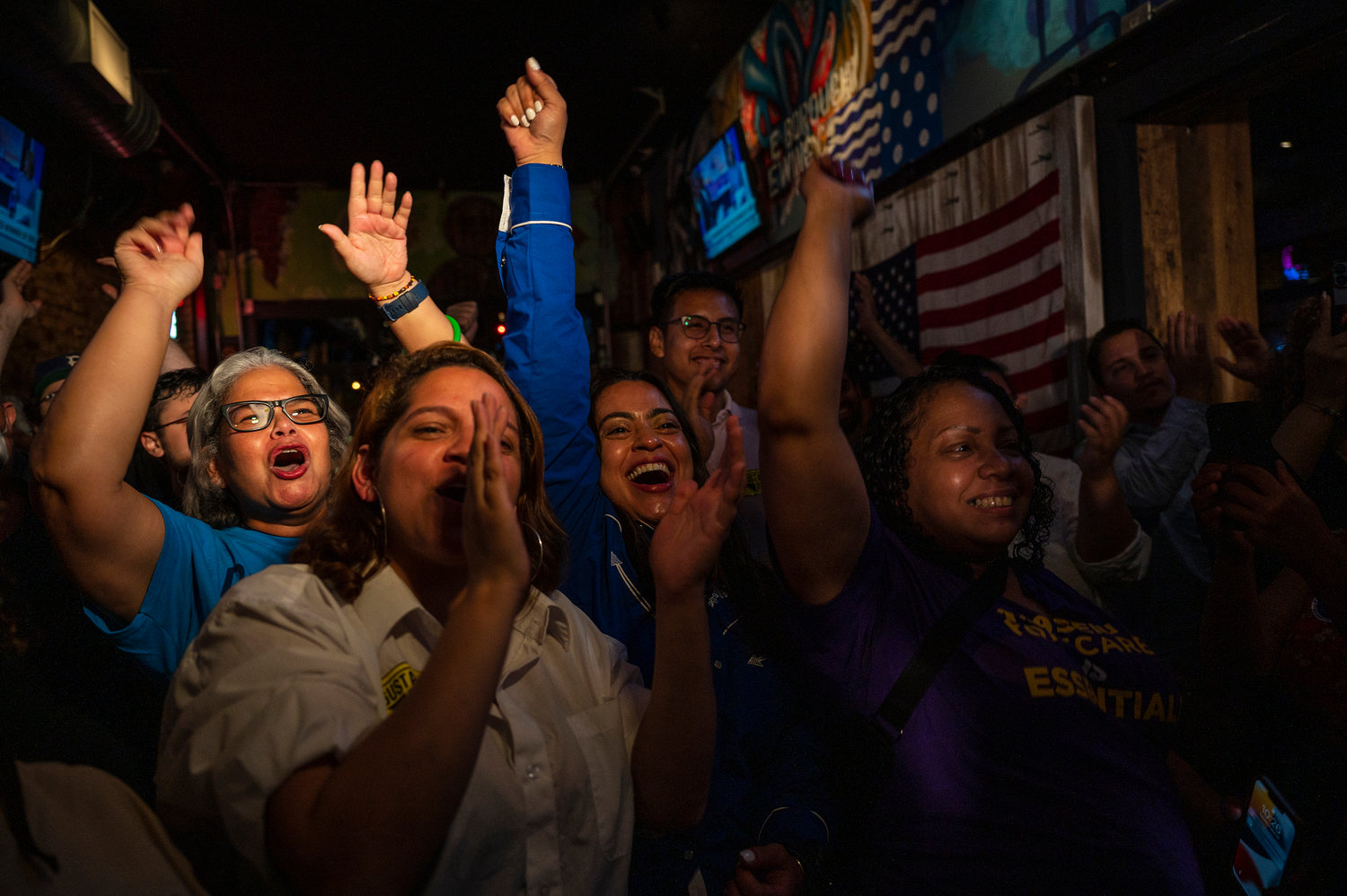 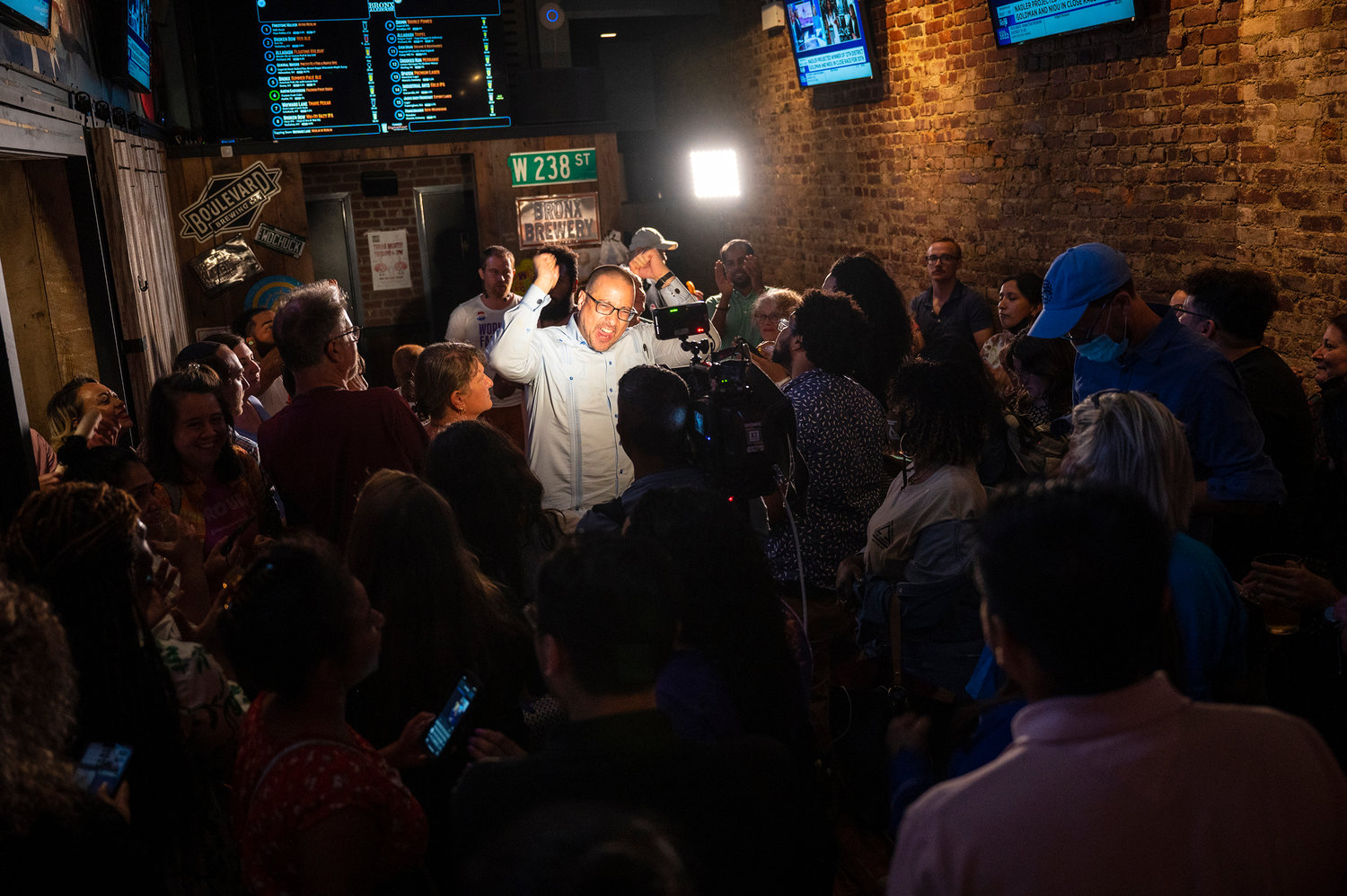 State Sen. Gustavo Rivera breathes a sigh of relief, hugging an old friend at the Bronx Ale House in Kingsbridge Aug. 23. He staved off a challenge from Miguelina Camilo to continue his long tenure in Albany’s upper chamber.
Hiram Alejandro Duran
Previous Next
By Sachi McClendon

“You come for the king, you best not miss,” Gustavo Rivera told a cheering crowd on a late Tuesday night last week.

The embattled senator had just defeated Miguelina Camilo, who had all the might of the Democratic Bronx machine behind her, for his seat in Albany. His opening line — a quote from lone-wolf gangster Omar Little in HBO’s “The Wire” — underscored the stakes in the primary.

Yet, Rivera won. The margins of victory were slim, though. As the total stands now, Rivera pulled in 5,700 votes, Camilo just under 5,200.

Eli Valentin thinks a combination of factors led to Rivera’s victory — including his past legislative record, his surprising success in the district’s largely Dominican section, and his independence from the Democratic machine.

“I think that in many parts of this senate district, that resonates with voters,” said Valentin, a political analyst and lecturer at Union Theological Seminary. “Gustavo is kind of like a lone wolf out there in the Bronx.”

But what gave Rivera the edge?

The new senate district overlaps with seven Assembly districts, but the vast majority of voters — nearly half — came from the Assembly district represented by Jeffrey Dinowitz, who worked overtime to see Rivera kicked to the curb.

In the lead-up to the primary, Dinowitz — arguably the most powerful politico in the area — and Rivera were going political tit for tat. Rivera backed Dinowitz’s challenger in the Assembly primary in June, Dinowitz insinuated Rivera was a carpetbagger. Dinowitz said Rivera was pro-boycott, divestment and sanctions against Israel. Rivera called him a liar.

At the same time, the Assemblyman did everything he could to push Camilo to victory. Days before the election, he wrote a letter to The Riverdale Press lauding Camilo and her values. And on Aug 23, he could be seen out campaigning for the first-time candidate.

Combine the sway the entrenched Assemblyman holds in the district with his support for Camilo, and it becomes clear why Valentin and others expected Dinowitz’s district to not be Rivera’s stronghold.

“I thought Gustavo would not have performed as well there as he did, considering the Dinowitz influence,” Valentin said.

What’s more, Rivera had never represented a large portion of that district, including Riverdale, North Riverdale, Fieldston and Spuyten Duyvil. Instead, that was led by Alessandra Biaggi, who last week lost her bid for Congress.

Yet, by Wednesday, it was clear Rivera held more than his own in the district. He and Camilo were all but tied, with barely a full percentage point separating the two divvying up more than 5,000 votes.

“I thought Gustavo would have needed to hold his own in the 81st in order to win,” Valentin said. “And that’s exactly what he did.”

Even more surprising for Valentin: Rivera enjoyed a huge win in the Assembly district represented by José Rivera, winning with 62 percent of the vote. Over the years, the district — which includes neighborhoods like Belmont, University Heights and Fordham Manor — has shifted from a Puerto Rican- to a Dominican-dominated electorate.

“The assumption by many is that shift will parlay into more voters voting for Dominican candidates,” Valentin said. “And I think largely that will be the case.”

The result of the demographic shift revealed itself in the June primary after a Dominican challenger — George Alvarez — handily defeated José Rivera, a longtime incumbent from Puerto Rico.

“I thought that Miguelina would do much better in the 78th because of those dynamics,” Valentin said. Yet, “it’s clear that voters are just voting for who they believe is the better candidate, irrespective of their” origin.

Taken together, Valentin thinks Rivera’s win is a sure sign of the Bronx Democratic Party’s waning influence.

“I have felt for some time that the Bronx county machine is a paper tiger,” he said. “Put a good candidate with some decent amount of money, and they can take county out.”

Michael Heller, who is a current state committee member and former president of the influential Benjamin Franklin Reform Democratic Club, thinks the preliminary results prove the opposite.

Camilo, a first-time candidate who came into the race with zero name recognition, was just inches away from ousting the longtime legislator.

“He had a record,” Heller said. “He’s an incumbent. He had strong support from many powerful unions.”

Heller, who supported Camilo in the race, also notes that most of the wins throughout the city and state went to incumbents.

“He won. But his margin, I believe, was the smallest of any existing person running for election,” Heller said. “He was not a runaway winner.”

Heller, however, was the only Bronx Democrats-supported candidate to win election to a party support position locally in the June primaries, while other positions — including district leaders — were won by anti-machine candidates.

There are still a handful of votes left to be counted, but it’s unlikely numbers will shift too drastically. That said, Camilo’s team has not conceded the race, saying she is waiting until every vote is counted before making any determination.

The elections board is expected to release the certified results Sept. 9.