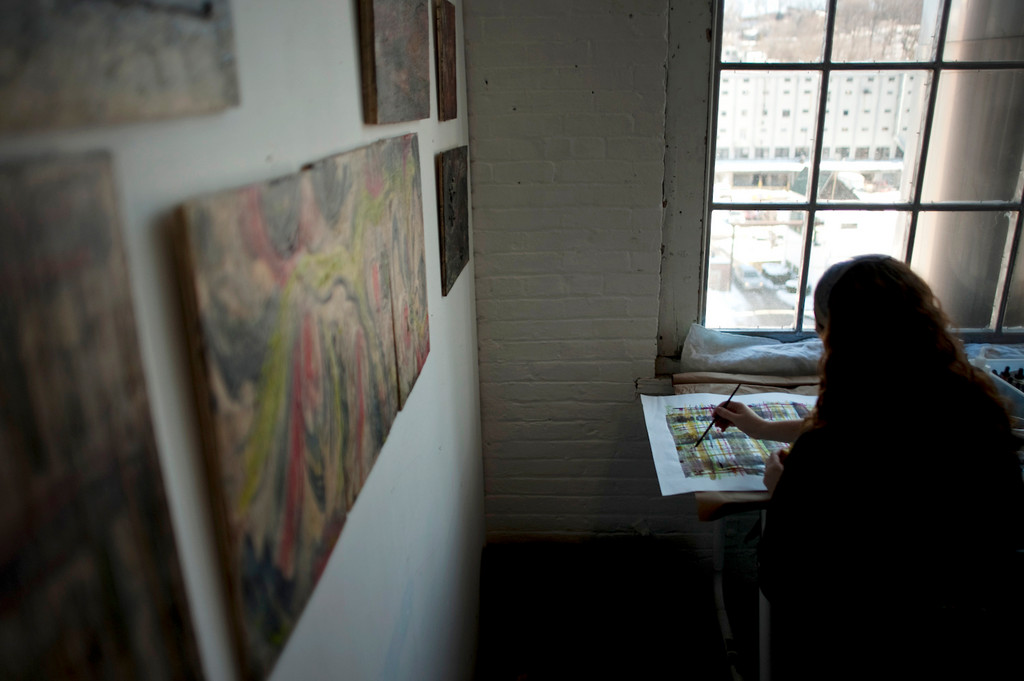 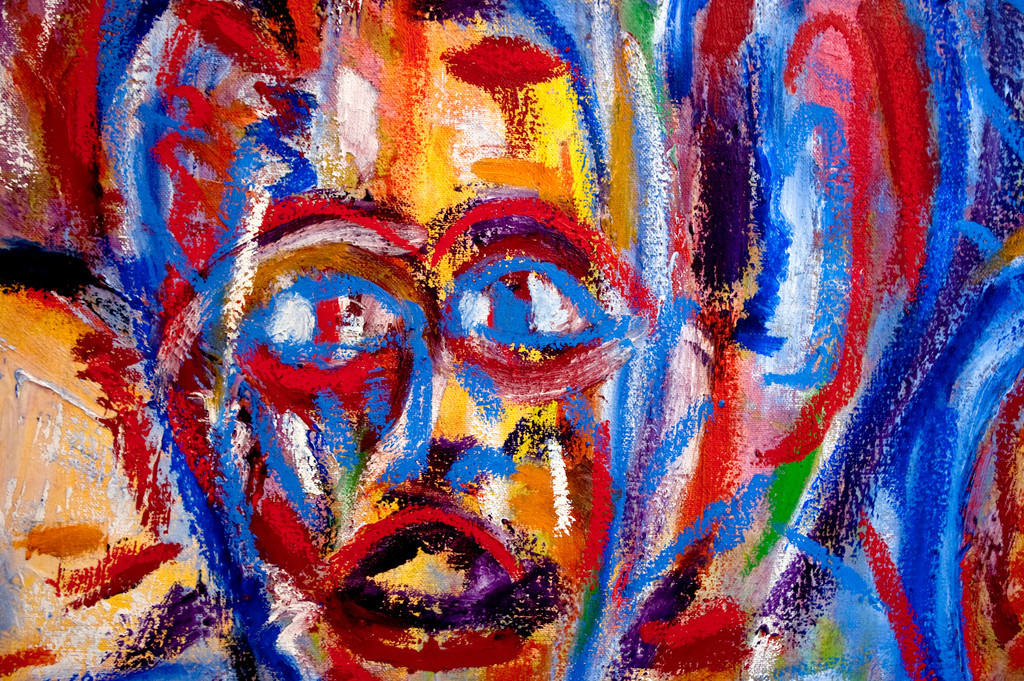 Works on display include Peter I. Siegel's oil stick on canvas piece titled 'Inspiration,' a detail of which is pictured above. 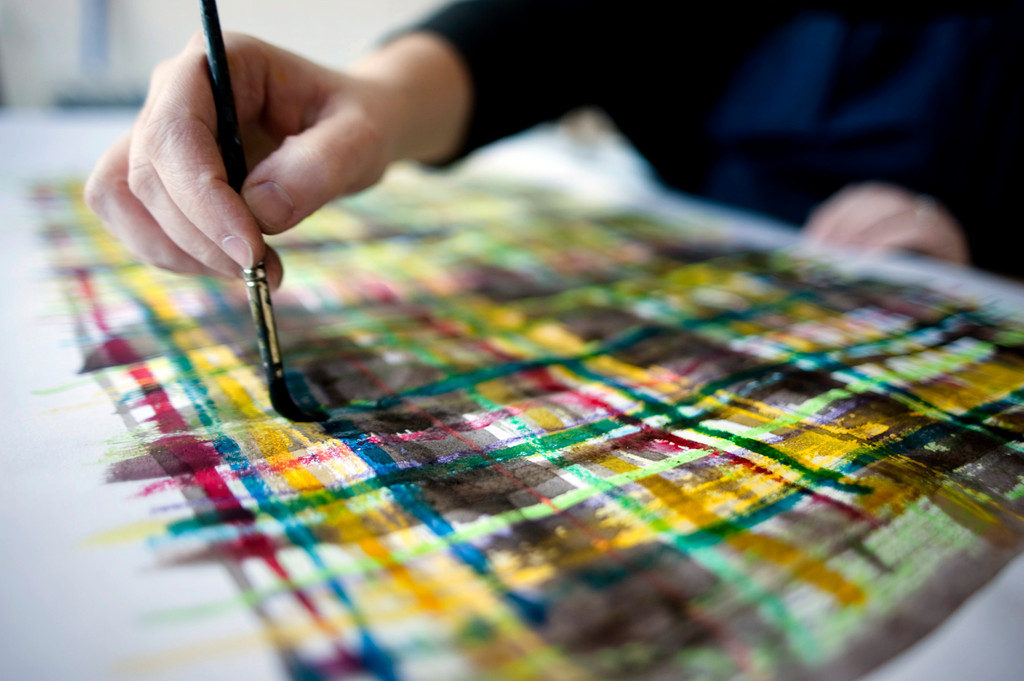 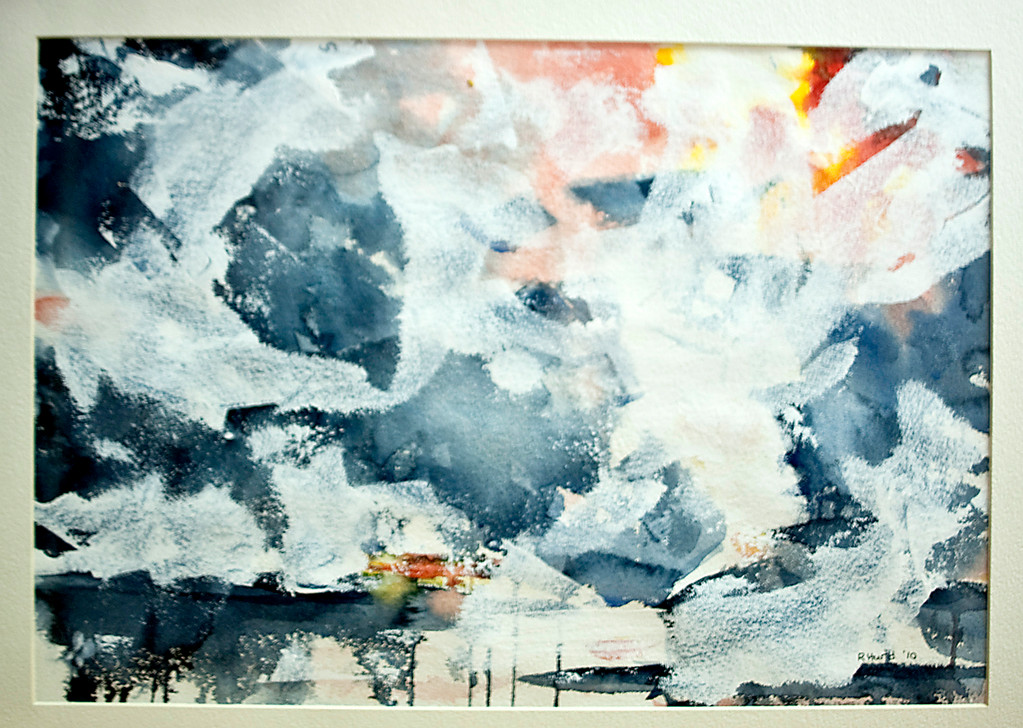 Riverdale watercolorist Ruth Hurd's piece, Winds of Change, which was inspired by the Deep Horizon disaster, is on exhibit. 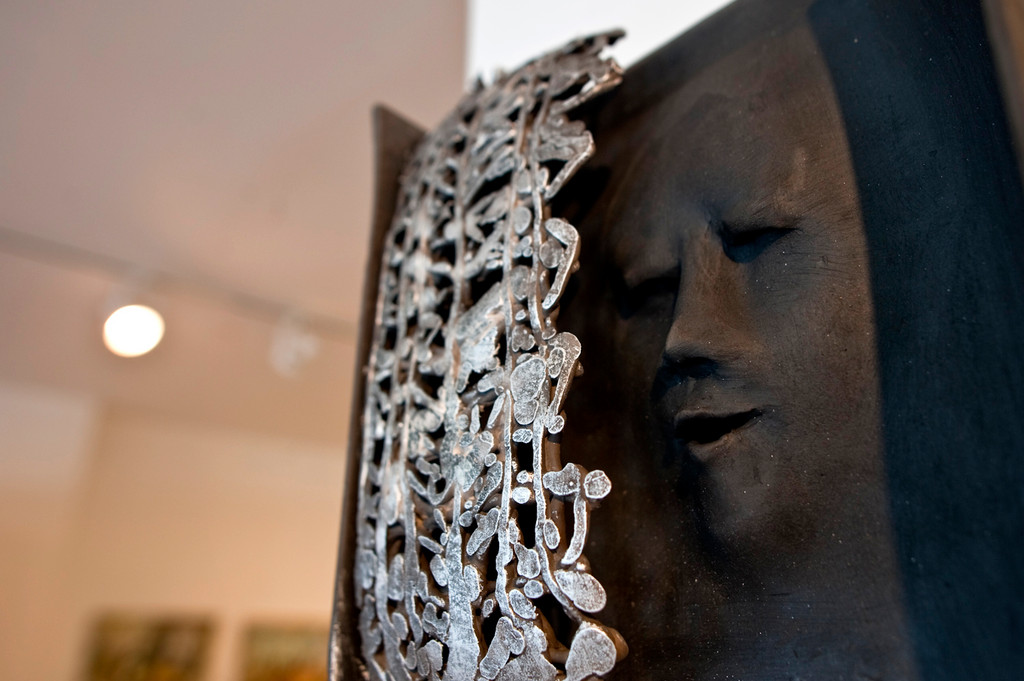 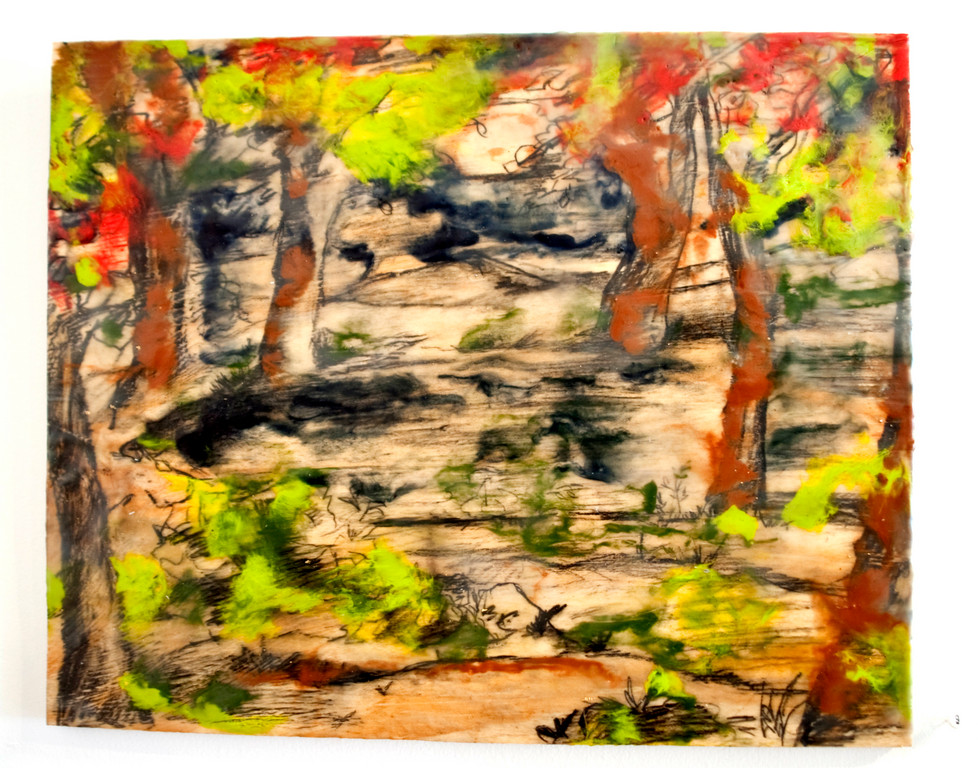 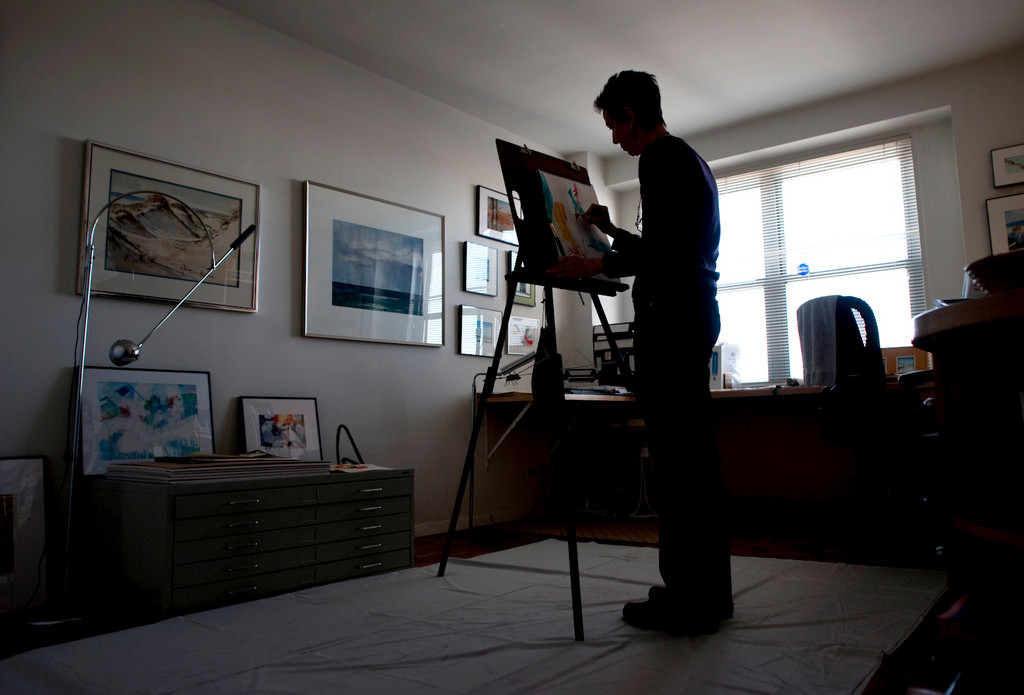 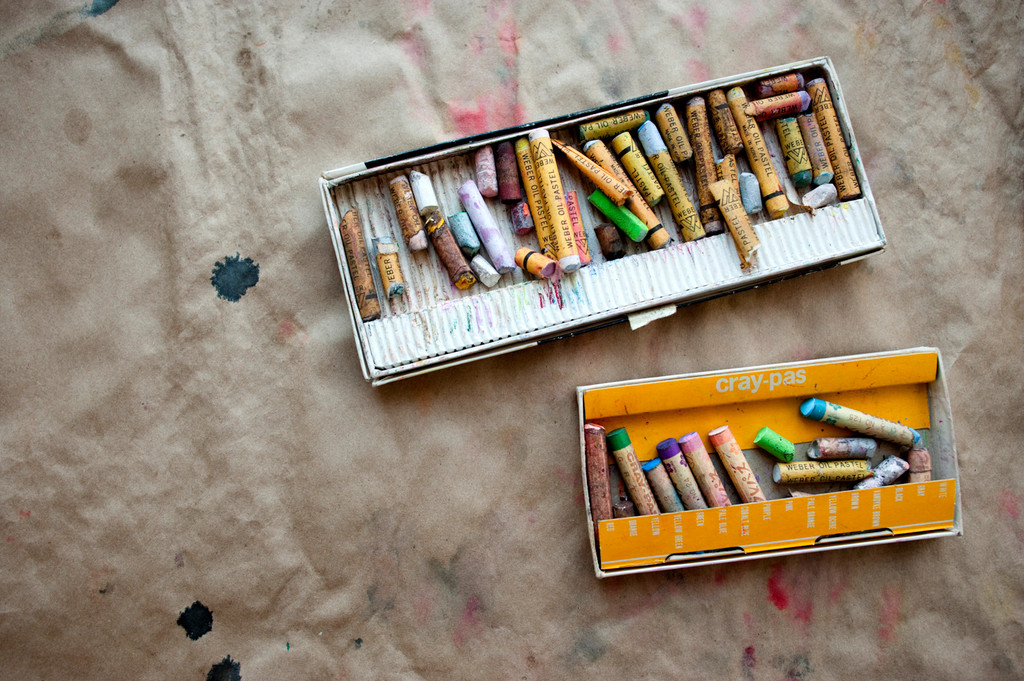 The bright, airy space inside the Blue Door Gallery was filled with an eclectic mix of art ranging from an orange dinosaur sculpture with action figures climbing up its back to an image of cascading water covered in glitter.

Riverdalian Deborah Yasinsky’s “Early Fall,” inspired by her walks in local parks, stood apart from the others as a calming piece featuring subdued colors to depict a quiet, natural scene.

“The landscape in Riverdale … the trees and especially the river views … just walking in the parks, it’s all inspirational,” Ms. Yasinsky said during a recent interview at the gallery in Yonkers.

Ms. Yasinsky, who paints with melted, pigmented wax in order to create textured drawings, was just one of more than 20 artists from the tri-state area featured in the Blue Door Gallery’s annual juried art show. The exhibition, which opened on Jan. 8 and will run through Saturday, Feb. 5, displays works by members of The Blue Door Artist Association.

Ruth Hurd, who also lives in Riverdale and paints at Wave Hill on Tuesdays, also had a piece in the show. Her watercolor, “Winds of Change,” depicted a bright orange light breaking through ominous masses of gray clouds.

“She’s amazing,” gallery manager Krista Faist said of Ms. Hurd, enthusiastically pulling out a thick binder from a nearby closet and flipping through pages of the artist’s landscapes.

Although the Blue Door Gallery, located at 13 Riverdale Ave. in Yonkers, has been open for about three years, Ms. Faist is trying to change it for the better. She taught art in an underserved community in Baltimore at an organization featured on the fourth season of The Wire and has now moved on to spreading the word about Blue Door.

She said she is trying to get more artists involved in the gallery, putting up fliers to promote shows and doing outreach and social promotion via the Internet. So far, she said, it’s been a success. The exhibit’s opening reception on Jan. 9 attracted 60 to 70 people, a far better turnout than at the last show, Ms. Faist said.

“It was packed,” Ms. Yasinsky said of the opening reception. “We were having trouble moving around.”

Gallery director Arlé Sklar-Weinstein said this is only the beginning. On Sunday, Jan 23 there will be a writing workshop called ArtSpeak at 1:30 p.m., followed by an open mic at 4 p.m. There will be an opening reception for Out of Africa, an exhibition inspired by African cultures, landscapes and materials, on Sunday, Feb. 13.

“The gallery [is] here to serve both the community and the artists,” Ms. Sklar-Weinstein said.