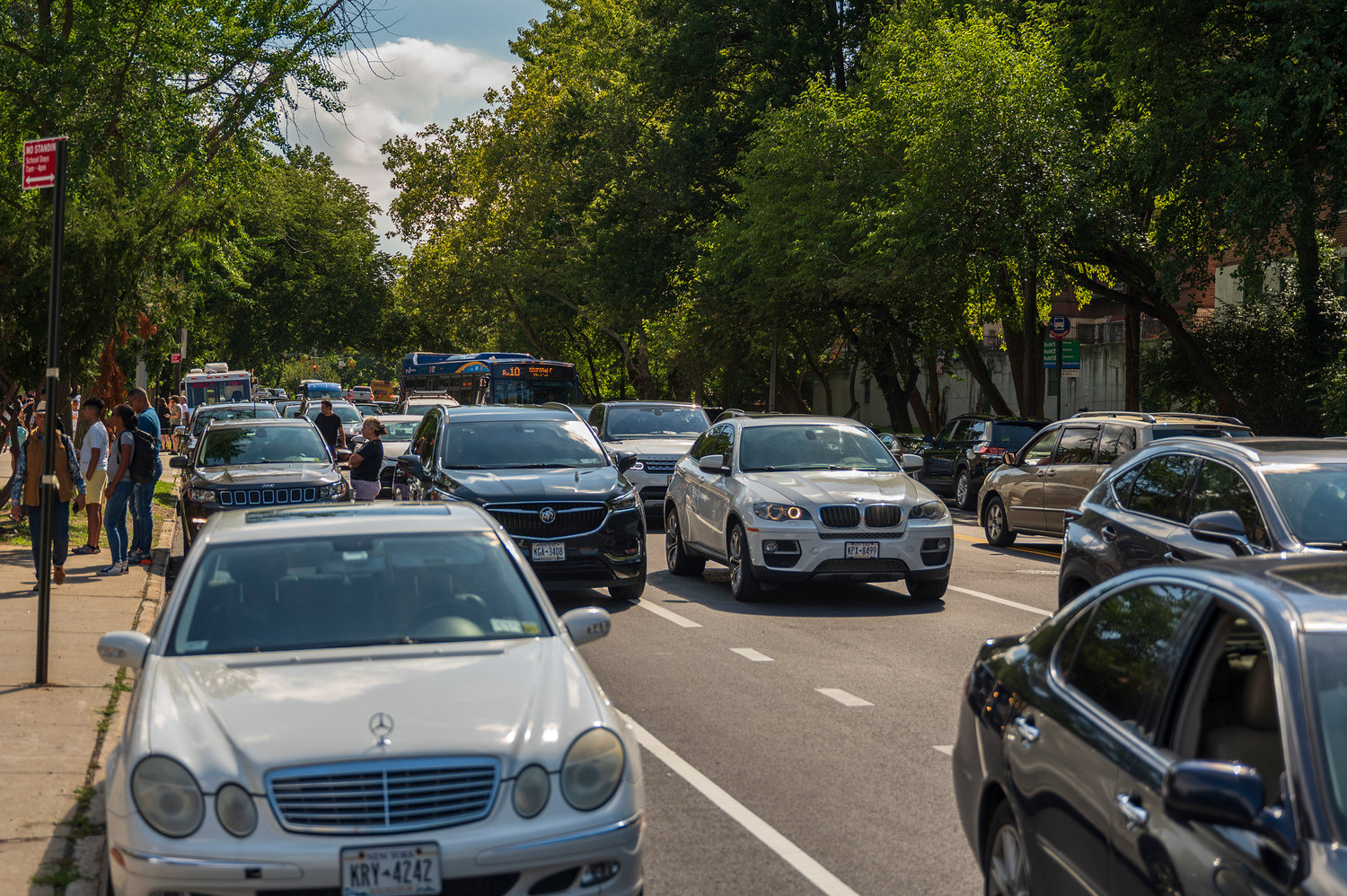 Outside of P.S. 81 Robert J. Christen at dismissal on Sept. 12 several days after the first day of school, nothing has changed from previous years or perhaps gotten worse. Double-parked cars are stationed on bike lanes preventing a safe ride for cyclists. This comes after the newly paved redesign project proposed by the DOT less than a year ago.
Hiram Alejandro Durán 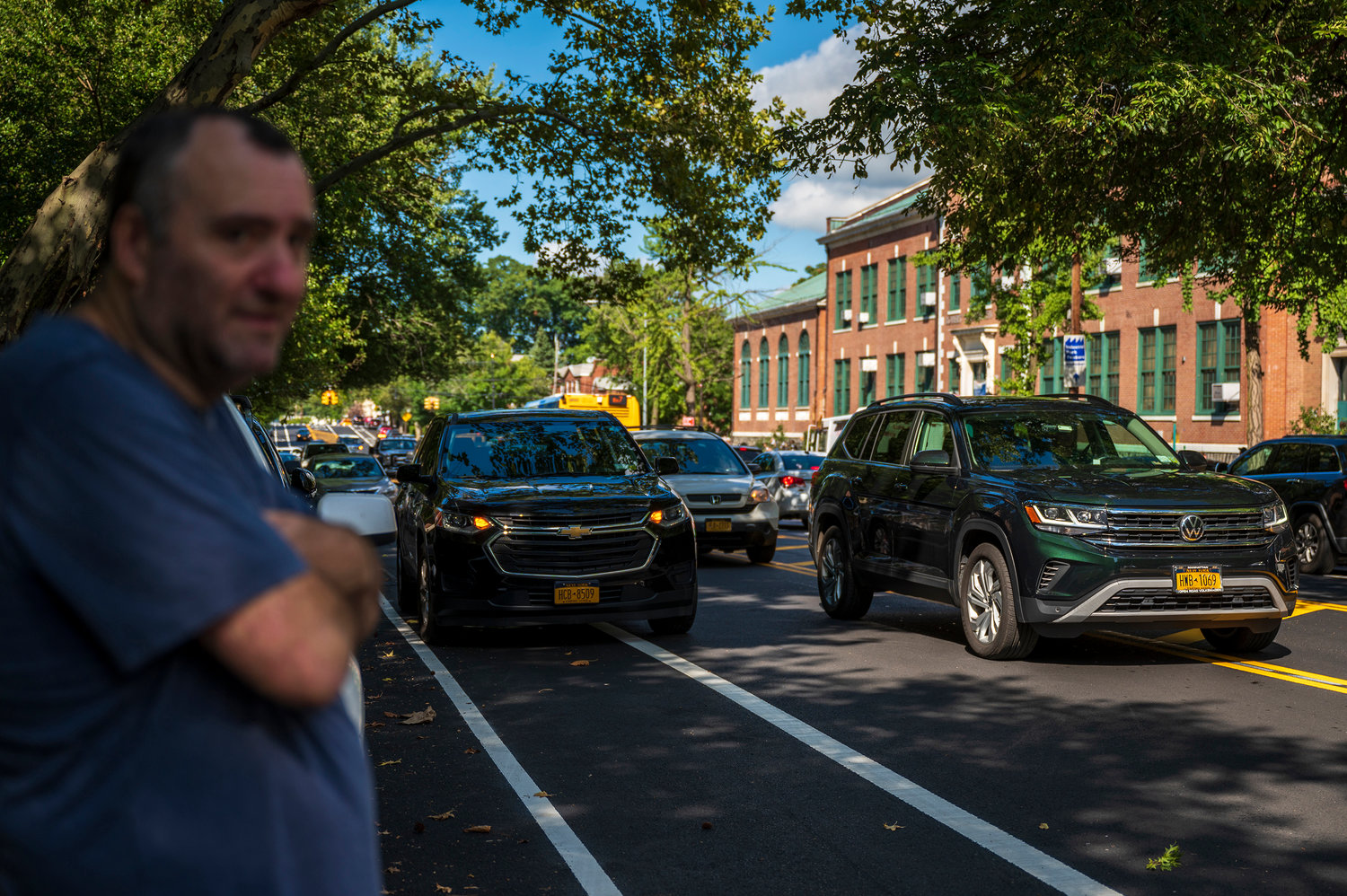 Outside of P.S. 81 Robert J. Christen at dismissal on Sept. 12 several days after the first day of school, nothing has changed from previous years or perhaps gotten worse. Double-parked cars are stationed on bike lanes preventing a safe ride for cyclists. This comes after the newly paved redesign project proposed by the DOT less than a year ago.
Hiram Alejandro Durán
Previous Next
By Stacy Driks

Greater Riverdale will see two traveling lanes for the next year or so on Riverdale Avenue.

“I’m here to discuss the project’s point,” Forgione said. “We know there are concerns.”

The hour-and-a-half meeting held in St. Margaret of Cortona School on Riverdale Avenue and West 260th Street with around 20 people turned into a series of attacks on the commissioners.

“You did a darn good job on decreasing traffic, because it completely stopped, and now the exhaust is going into people’s bedrooms,” Deirdre Burke, a resident, said facetiously.

While the DOT planned on slowing traffic and decreasing the chances of accidents, there were three minor accidents within the first week of the project’s completion. Residents who live in Riverdale Avenue Gardens say they smell exhausts as the cars and buses are backed up on Riverdale Avenue.

Assemblyman Jeffrey Dinowitz made that clear—although he mentioned, it is also unclear if it was because of the street modification.

The DOT has gathered a series of traffic studies within the Riverdale Avenue project, including accident reports. However, a few of the greater Riverdale residents and officials have no faith in those studies.

Assemblyman Jeffrey Dinowitz said confidently, the agency wasted its time performing this project. He claims that there is no proof of accidents that were caused by four travel lanes.

He added that during the first week of the project, there were was a total of three accidents on Riverdale Avenue.

“People should feel like they are being listened to,” he added.

He was not only speaking on behalf of the residents but also for himself, as he argued for left turning signals on Riverdale Avenue going northbound and southbound.

Finally, both commissioners listened and directly took notice of his plan.

To Dinowitz’s surprise, not only are they going to revisit Riverdale Avenue within one year to analyze the traffic flow and a decrease in accidents.

But after claiming it was not “rocket science” to add a turning signal and the inexpensive cost of a light bulb within six months, the transportation department will plan on investigating this idea by visiting the streetlights.

Since the April’s CB8 traffic and transportation meeting regarding the lane elimination plan, many petitioned that the project should be stopped immediately.

Concerns over emergency vehicles were something that residents wanted answers for. How will an ambulance pass Riverdale Avenue?

The commissioners responded that the median lines on the ground are a safe space for emergency vehicles to travel.

Yet, those are blocked by cars driving around those who double park. While the turning lane is directly in the middle as well.

“There are people who like this plan,” Forgione told The Riverdale Press.

This is true too — several people believed this was an excellent target to slow traffic down. It also gave more breathing room for cyclists.

Before the completion, residents argued that there are already bike paths on Mosholu Avenue that are never used.

“It boggles my mind that people say, ‘no one bikes on Mosholu as if the incessant double parking has nothing to do with it,” said Johnathan Cane, a former parent of a student at P.S. 81 Robert J. Christen.

He is neither confident nor optimistic that parents or guardians will stop double parking on West 256th Street in front of his son’s former school.

“We know you have three schools on the corridor, and we are very familiar with the craziness that occurs at schools, especially during drop-off,” said Forgione.

P.S. 81 was a significant topic of discussion over concerns over traffic.

Besides P.S. 81, there is St. Margaret of Cortona School and Salanter Akiba Riverdale High School. But the public school has stood as the greatest concern because of the number of students.

Dinowitz said it is not a shock that parents double park. Although he doesn’t support double parking, he considers police enforcement should be a higher priority.

Two years ago, Jimenez’s picked up her son from P.S. 81 and was relieved he doesn’t attend the Riverdale Avenue school anymore. To her, the pick-up was already full of traffic. Picking him up now would be a disaster for her, she said.

Camelia Tepelus, who works in Morris Park , is not against the modification but considers her neighbors of greater Riverdale to give it a chance.

In 2019 the transportation department announced the beginning of its safety improvement plan along Morris Park Avenue between Newport Avenue and Adams Street in the Bronx.

This project installed a painted center median with left turn lanes while adding one bike lane and reducing one travel lane in both directions.

The first deputy commissioner told The Press they will do whatever improvements they can to increase safety.