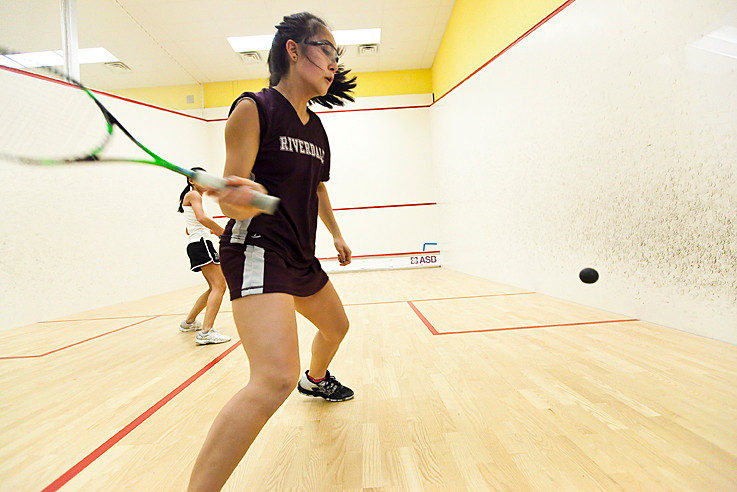 Sarah Horne has been playing tennis since she was 3-years-old, but finds something liberating about whacking a squash ball as hard as she can.

“You don’t have to worry about it going into the net or going too far,” said Horne, the sophomore co-captain of Riverdale Country School’s girls’ squash team.

Horne’s spunk is true to form. She played squash last season as a freshman and is the only female player on the Falcons’ coed team.

“I liked the experience, because my game got better by always competing against players who were better than me,” she said.

But, when John Pizzi, the school’s new athletic director, decided to expand the squash program to include separate male and female teams, Horne was a natural choice to help lead the new girls’ team.

She is joined by fellow co-captain Jacqueline Laret, another sophomore, who seems equally as enthusiastic about the sport.

“It’s a great workout,” said Laret. “There is a lot of lateral movement and lunging. You have to move quickly and efficiently.”

To the uninitiated, squash is the most esoteric of all the racquet sports. It mixes long-necked racquets with tight, strictly defined courts.

While the average racquetball court is a fully enclosed space measuring 40 by 20 feet, with a height of 20 feet, a squash court is 32 by 21 feet, with clear outlines at the top of the court and on the front wall.

Unlike a racquetball, which measures 2.25 inches in diameter, a squash ball is only 4 centimeteres.

When cold, this ball is virtually dead to the bounce, but once energized by play, it is like a miniature Spaldeen with attitude, inviting some of racquet sports’ fiercest, delicate and oblique exchanges.

Predictably, the fledgling team is still finding its way, having been shutout in its first two matches.

On Jan. 18, the Falcons were shutout 7-0 in matches against Hackley.

Horne was defeated by Amelia Debronyi, Aditi Ahuja lost to Charlotte Clapp, Monique Reichenstein to Kelly Saxton, Laret to Annie Wechsler, Marion Goldberg to Charlotte Wechsler, and Amanda Simpson to Danielle Pettiti. All of the matches were 3-0 in game scores.

“Natasha, a ninth grader, had a particularly good match and was the first girl in the squad’s history to win a game in a match,” said Gaspar Epstein, who coaches both the boys’ and girls’ teams at Riverdale Country School.

The games are all played to 11 points, with the winning player required to have a two-point advantage. The matches go to whoever has the best three games out of five.

Despite the loss, Epstein said that he can already notice improvement in the team’s play.

“They were able to play longer rallies due to their improved shot selection and solid hustle,” said the coach.

The Falcons opened their team against Poly Prep, another longtime school rival, losing 7-0 in matches.

When officials of RCS’s athletic office announced that they were holding tryouts for the school’s new girls’ squash team, 13 students showed up to fill the team’s 10 spots.

“I was really pleased with the turnout, especially since most of the players have little or no experience with the game,” said Epstein, noting that the team has no seniors and only two juniors.

“The squad has improved a lot this year and I see us getting significantly stronger as we build on experience,” he said.