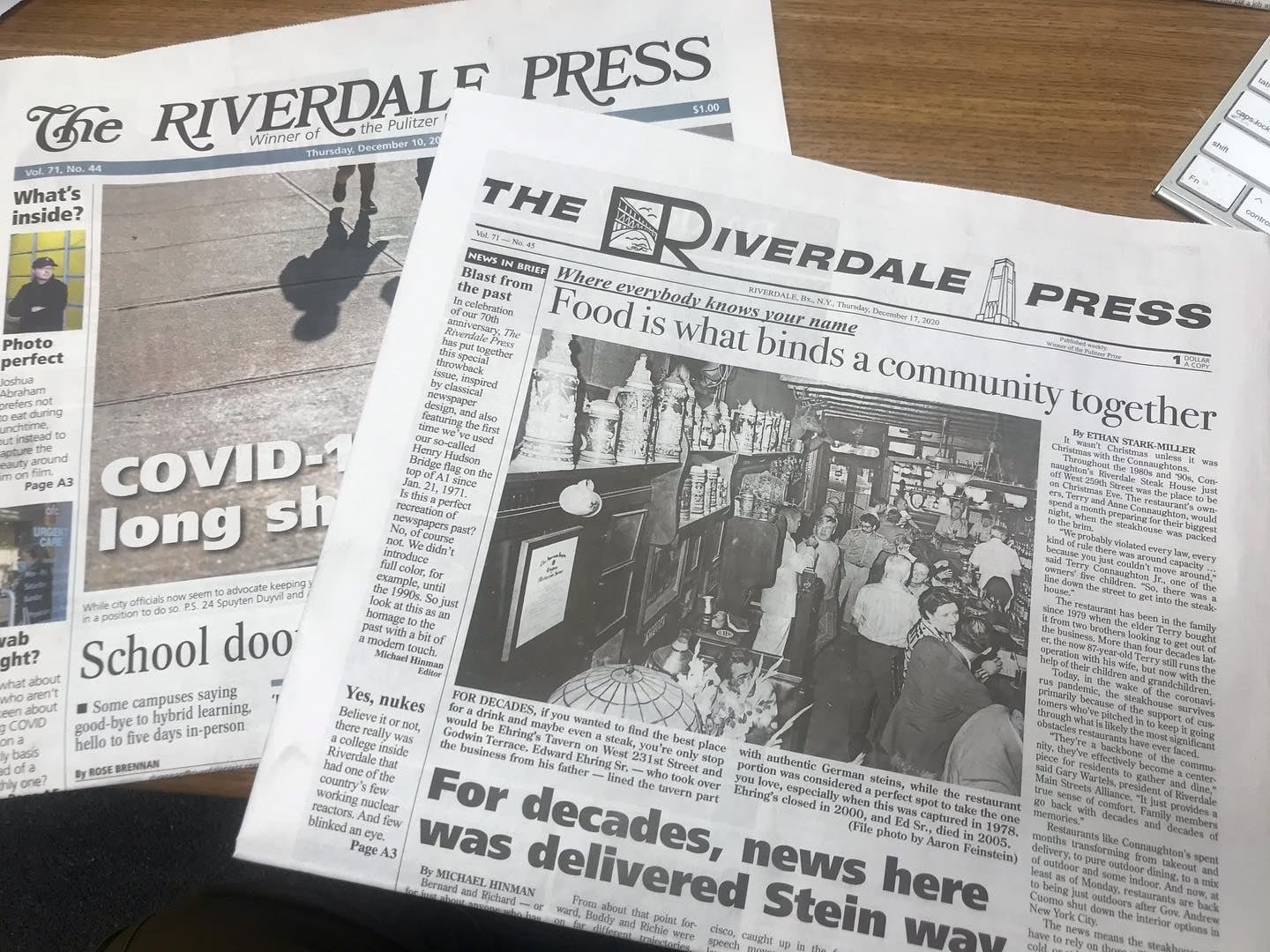 The Dec. 17, 2020 edition of The Riverdale Press was a 'throwback' issue celebrating the 70th anniversary of the paper. It was the first time since 1971 an edition of The Press was delivered to homes without its iconic flag designed by Richard L. Stein.
MICHAEL HINMAN
STAFF REPORT

It's always a great day for community journalism, but Friday was even more special for The Riverdale Press team after winning eight statewide awards at the New York Press Association's Better Newspaper Contest, including one of the organization's most prestigious: the Past Presidents' Award for General Excellence.

"This newspaper showed a strong combination of good writing and reporting on community issues, robust editorial pages, great diversity in voices, and attractive, reader-friendly layout," judges from the Pennsylvania Newspaper Publishers Association said about The Press.

Two stories really stood out for the judges as they looked through 2020 editions of The Press — an Oct. 22 story by former reporter Kirstyn Brendlen and editor Michael Hinman about how businesses in Kingsbridge were recovering post-pandemic lockdown, and a July 23 story by Brendlen that explored alternative ways for mothers to give birth.

The stories "examined important issues through real people, as well as official and expert sources," according to the judges.

The Press earned two other first-place wins as well. A group of stories by Rose Brennan, Hinman and former reporter Raphael Lassauze earned the newspaper the top slot for coverage of the arts.  Lassauze previewed a gallery of Thomas Cole works at the Hudson River Museum. Brennan profiled photographer Joshua Abraham on an exhibit focused on New York City architecture.  Hinman shared details of a virtual gallery last winter hosted by Hostos Center for the Arts and Culture as well as the Bronx Council on the Arts.

The other first place award went to Hinman for last year's "throwback" issue celebrating the 70th anniversary of The Riverdale Press. Using a different flag at the top of the paper for the first time since 1971, Hinman tried to recreate old-style newspaper layout by celebrating some of the stories from the community's past.

"I love this," one judge said about the throwback issue, "What a creative idea. I feel like I'm back in the 1950s. The front-page photo (of inside Ehring's Tavern) sets the tone for the entire issue. What a great way to celebrate the newspaper's 70th anniversary."

Hinman also earned second place for best news story on his coverage of nursing home deaths during the height of the coronavirus pandemic. He picked up an honorable mention in the feature story category for his look into the impending demolition of the Moller Mansion in Kingsbridge.

And one more honorable mention for Hinman's columns on spending time with his family during the pandemic,  fear of what it would be like to live without community newspapers, and his own battles with the coronavirus early in the pandemic.

The team of Hinman, Brendlen and former reporter Anthony Capote won third place in coverage of local government for stories addressing how elected officials were dealing with the homeless problem in the wake of the coronavirus pandemic,  a deep dive into the new ways to search for complaints against New York Police Department officers, and  when several city council candidates spoke out against the Benjamin Franklin Reform Democratic Club, among others.

And finally, The Press earned one more honorable mention in NYPA's best news or feature series category for the tale (and its followup) of building fire hero Josh Pizarro's efforts clearing out the building of 215 W. 242nd St., before getting injured himself. Those two stories were written by Brendlen and former photo editor Julius Constantine Motal.

Winners for this year's Better Newspaper Contest were chosen among 2,440 entries submitted by more than 150 publications.

The eight awards won by The Riverdale Press contributed to a record 34 total awards won by all of the Richner Communications newspapers, including its Herald community group on Long Island.

Those papers won several first-place awards as well, including spot news photography by executive editor Scott Brinton for the Merrick Herald; advertising excellence for the Long Beach Herald; best obituaries by Mike Conn at the Sea Cliff-Glen Herald; feature photo by Brian Stieglitz from the East Meadow Herald (as well as best special section for the publication); and best online static advertisement for the Nassau Herald.

The Riverdale Press has now won 29 state awards since 2017, including top honors for design and for news coverage.

Kingsbridge on brink of recovery? Not so sure
Changing how we look at childbirth
Changing world, changing art
Attorney by day, photographer by lunch break
A dozen artists, a massive river, a new kind of gallery
Dec. 17, 2020 edition of The Riverdale Press
Nearly 5,000 have died in facilities across New York
Moller mansion on brink of extinction
You'll never regret surrounding yourself with love
Our most chilling headline? One saying, 'We are history'
Discovering pretty quickly how much coronavirus hits home
Hero braves smoke to warn neighbors of blaze
Hero almost didn't live to tell story
Shedding new light on NYPD complaints
Candidates band together versus Ben Franklin Club