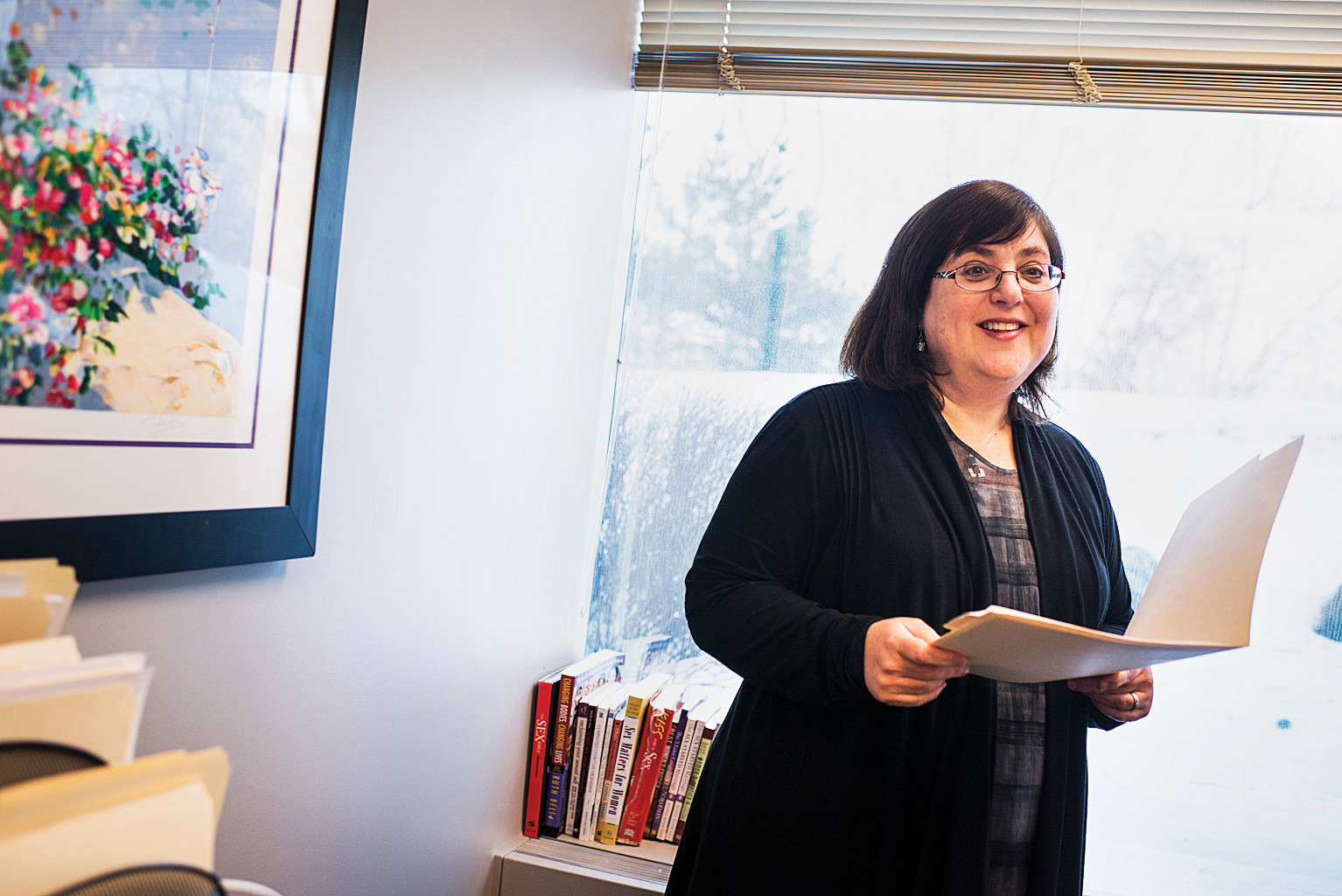 Bat Sheva Marcus, a clinical director at the Medical Center for Female Sexuality in Purchase, NY, at her office on Feb. 16.
Adrian Fussell / The Riverdale Press
By Nic Cavell

The idea of sex therapy might seem incompatible with Orthodox Judaism. But Dr. Marcus, who grew up in Philadelphia, has found a way to merge the two since moving to the northwest Bronx 25 years ago and joining the Hebrew Institute of Riverdale (HIR).

The Riverdale community, Dr. Marcus says, is a “hotbed for Orthodox feminists.”Her clients here and elsewhere strive to recover the “transcendence” of sex from the shame and repression many Orthodox women struggle with.

“I like to say that I sort of fell into Riverdale,” Dr. Marcus said. “It’s really hard to find that Orthodox feminist spirit anywhere else. And it’s had a huge impact on my own life, on my kids.”

She brought that spirit to her partnership with Michael Werner, a urologist she met on HIR’s playground in the mid-1990s and who co-founded the Medical Center for Female Sexuality with her in 2000. Dr. Marcus also called on her community’s unique vision of feminism to found the Jewish Orthodox Feminist Alliance (JOFA) with three other Riverdale women in 1997.

She brings their philosophy to bear on her work with patients, saying everyone deserves a “full, meaningful and fun sex life” like anyone else.

Calligraphy manuscripts and colorful abstractions line the walls of the Medical Center’s Westchester office. At one end of the hall are the rooms where Dr. Marcus prefers to conduct therapy. She described the atmosphere as “girly,”with pink artworks and warm lighting. At the other end of the site, a sketch of an autumnal warbler from Audubon’s The Birds of America marks the entrance to a sperm bank.

Although she can seem casual about sex in conversation at her slightly cluttered office, the ideas Dr. Marcus retains from her childhood in Philadelphia are anything but. She highlighted one tale as an example of the mentality she grew up with. A Jewish woman facing execution by the Cossacks foresees the possibility of indecency as she is dragged through the streets to her death, so she contrives to stitch the fabric of her dress into her lower legs.