RKA gets message, prepares for postseason 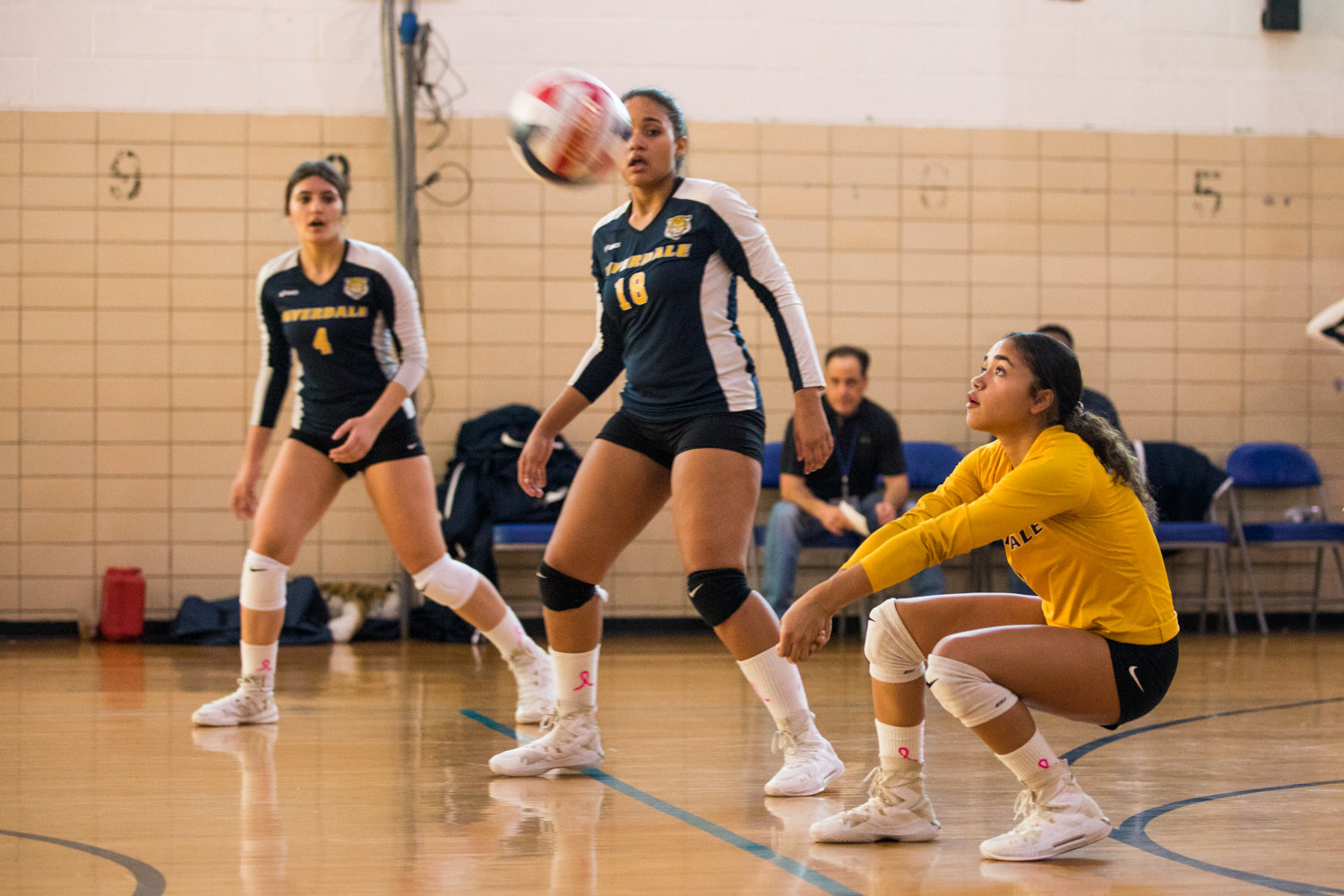 Riverdale/Kingsbridge Academy’s Julianne Fernandez records one of her 17 digs in the Lady Tigers’ straight-set victory over Lehman that clinched the Bronx A-2 Division title.
JULIUS CONSTANTINE MOTAL 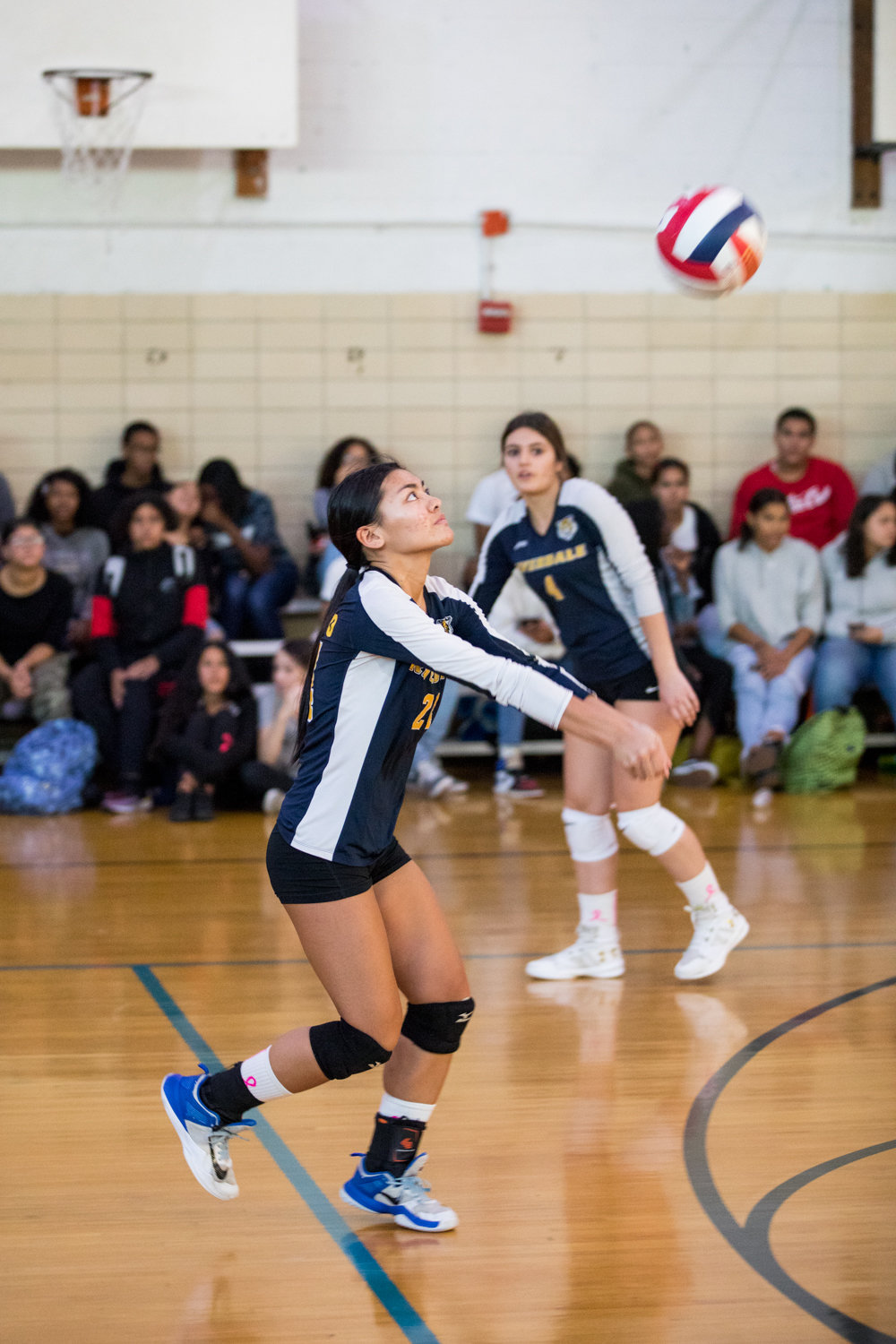 Riverdale/Kingsbridge Academy senior co-captain Patricia Casino sets up a Lady Tigers’ teammate with one of her 16 assists in RKA’s 25-13, 25-10 victory over Lehman last week.
JULIUS CONSTANTINE MOTAL
Previous Next
By SEAN BRENNAN

The Riverdale/Kingsbridge Academy girls volleyball team had just closed out its first set over Lehman in typical dominating fashion. But head coach John Reingold was not exactly pleased with his Lady Tigers’ performance.

Sure, they had cruised to a rather uneventful 25-13 first-set victory and were halfway home to clinching the Bronx A-2 Division in their first season in the Public School Athletic League’s A Division. But, still, Reingold was peeved at what he saw on the floor — his Lady Tigers going through the motions to win the game with a PSAL volleyball official in attendance.

To paraphrase Reingold, it didn’t matter that the Lady Tigers just win, they needed to dominate their opposition if they wanted to grab a high seed in the upcoming postseason and earn some much-coveted home playoff games.

Another set like the first one would just not be tolerated.

Apparently the Lady Tigers got the message as RKA needed just 18 minutes to dispose of Lehman in the second set, cruising to a 25-13, 25-10 victory that locked up the division title for RKA.

But afterward, there was no celebration as these Lady Tigers have their eyes on a much bigger prize down the line.

“In the first set, our energy was low and our responses were slow,” said junior Julianne Fernandez, who registered 17 digs in the win. “I think in the second set we picked it up more, but we were still off. Coach had a good point when he said we didn’t show a lot of effort today.”

To be clear, RKA never appeared in danger of losing the first set, jumping out to a 13-2 lead after a kill by Erika Hoti that led to a Lehman timeout. In fact, the Lions never got closer than eight points. But RKA regrouped and proceeded to go on a 10-3 roll to close the set.

“Coach was right, we were a little rocky,” said senior co-captain Patricia Casino, who recorded 16 assists and four digs in the win. “We really need to step it up. We’ve already lost to Bronx Science (RKA’s only league loss of the season), and that might have knocked us down a little in the seeds. So I think to get the best seeding we can, we have to push harder and show the PSAL that we’re still at the top. Just because we lost that one game doesn’t mean we don’t belong to be in the top 10.”

Larry Ellis has been Reingold’s trusted right hand man for quite a while and the veteran coach has been through the ride that saw RKA reach three consecutive PSAL B Division championship games, winning two. So he knows it’s time for the Lady Tigers to get into postseason form.

“We need to keep our energy up, and that’s very important because this is a high-energy game,” Ellis said. “If we do that, we’ll do very well the rest of the year.”

Reingold’s message seemed to find its mark with his team as they blew out South Bronx, 25-7, 25-10 last Friday to improve to 10-1 on the season. So with just two games remaining before the regular season concludes, it’s all about the Lady Tigers’ padding their resume to impress PSAL officials.

With a division title in their back pocket and a playoff berth locked up, it already has been a spectacular first season in the A Division for RKA. But no one on the Lady Tigers’ roster is satisfied. These Tigers always want more.

“I think we have a good run in us,” Fernandez said. “Our expectations are very high this year. We expect to dominate and be on top.”