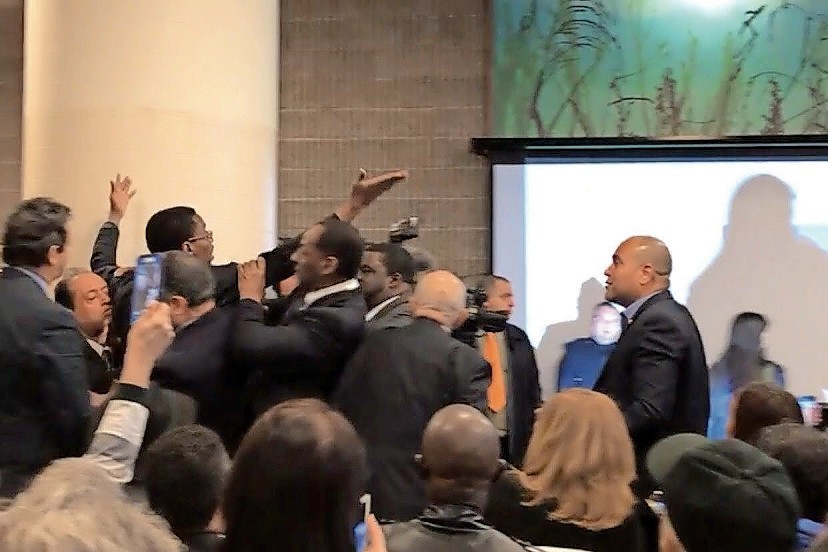 Self-proclaimed journalist and activist Sami Disu is escorted out of a speech by U.S. Rep. Adriano Espaillat after he rushed the podium. The congressman stopped security from doing so and answered Disu’s questions during the event last week at Tracey Towers.
Anthony Capote
Rough Year for IDC

As far as policy issues are concerned, the Independent Democratic Conference — the group of eight breakaway Democrats who hold an informal majority coalition with Republicans in the state senate — has had a great year.

The group was integral in passing legislation to raise the age of criminal responsibility, and lessen sentences for minors who commit nonviolent crimes. They also secured legal aid for immigrants, and increased health accountability for school cafeterias.

Despite those advances, an increasing number of political activists have expressed discontent not only with the IDC, but some of its members, including state Sen. Marisol Alcantara.

Groups like Rise and Resist, True Blue NYC and Indivisible have staged protests and demonstrations in front IDC members’ offices, including Alcantara’s on April 28.

It seems that anger toward the IDC has even spread to U.S. Rep. Adriano Espaillat, who endorsed Alcantara when she first announced she would run for the senate seat he vacated.

Since the inauguration of President Donald Trump, elected officials — particularly GOP members of Congress — have regularly faced off with protesters and angry questioners at town halls.

The internet is filled with videos of congressmen either refusing to answer questions, or outright leaving public events because protesters have either taken control of the event, or they face hostile questions from both the public and the media.

But not Adriano Espaillat.

The rookie congressman just gave a speech at Tracey Towers at 40 W. Mosholu Parkway summing up his first 100 days in the House of Representatives, and had just started taking questions when a self-proclaimed journalist, Sami Disu, was handed the microphone.

Disu, who writes for a website called Truth Against the Machine, asked Espaillat if he would be willing to shut down the House floor over immigration issues similar to how Democrats did it last year over gun laws. He also wanted to know why Espaillat endorsed Marisol Alcantara in the race to fill his state senate seat, only for her to join a breakaway group of lawmakers known as the Independent Democratic Conference.

Espaillat started to answer the questions only to have Disu shout over him with “Will you shut it down?” repeatedly. Mere seconds later, Disu rushed Espaillat’s podium in the crowded community room.

Screams burst from the audience as Disu stood inches from Espaillat’s face, shouting his questions and “We just want results!”

But as security tried to pull Disu out of the room in the midst of jeers from the 100 or so people in attendance, Espaillat did something unexpected.

The congressman appeared in the middle of the crowd of security guards and police officers, his arm on Disu’s shoulder, walking the questioner toward his podium.

The crowd, still in uproar, began to die down as Espaillat — who succeeded 46-year congressman Charles Rangel in January — walked back to the podium with Disu standing next to him, and answered the question.

“I am not here for a beauty pageant,” Espaillat said. “I am here to answer tough questions.”

He went on to call Alcantara “the most progressive member of the state senate,” adding that in her freshman term thus far, she helped secure funds for immigrant aide, and even brought funding to her district, which includes Marble Hill.

“If you look at her record, you will see that she took all progressive votes, not once aligning with Republicans,” Espaillat said. “Until she does, she has my support.”

That answer, however, didn’t seem to be enough for Disu, who later wrote on his website the outburst fell in line with the “intensity I sometimes conduct myself with.”

He later told The Press, however he did not rush the podium but instead only walked up to it to further pressure Espaillat on his questions.

“I am certainly not apologetic, because I have nothing to apologize for,” Disu said. “I lost my sense of composure, if you will, on that second question.”

Even with Espaillat trying to calm the situation, Disu wasn’t done. He shouted down the congressman, claiming his comments about Alcantara were “outright lies.”

Disu was so upset because he felt Espaillat’s support of Alcantara left him somehow responsible for her joining the IDC.

“I felt very betrayed,” he said. “The person he shooed into that office has joined the IDC.”

Espaillat first endorsed Alcantara after he won a crowded primary race to replace Rangel in 2016. After she was elected to fill his seat, she joined the IDC — who hold an informal majority coalition with the Republicans in Albany — and faced protesters herself outside her Inwood office April 28.

Alcantara refused to comment on Disu’s outburst at Espaillat’s speech when asked by The Press, but her spokesman, Michael Carter, said in a statement the senator “has had a long and effective relationship with Congressman Espaillat.”

“She looks forward to continuing this work in the years to come,” he said.