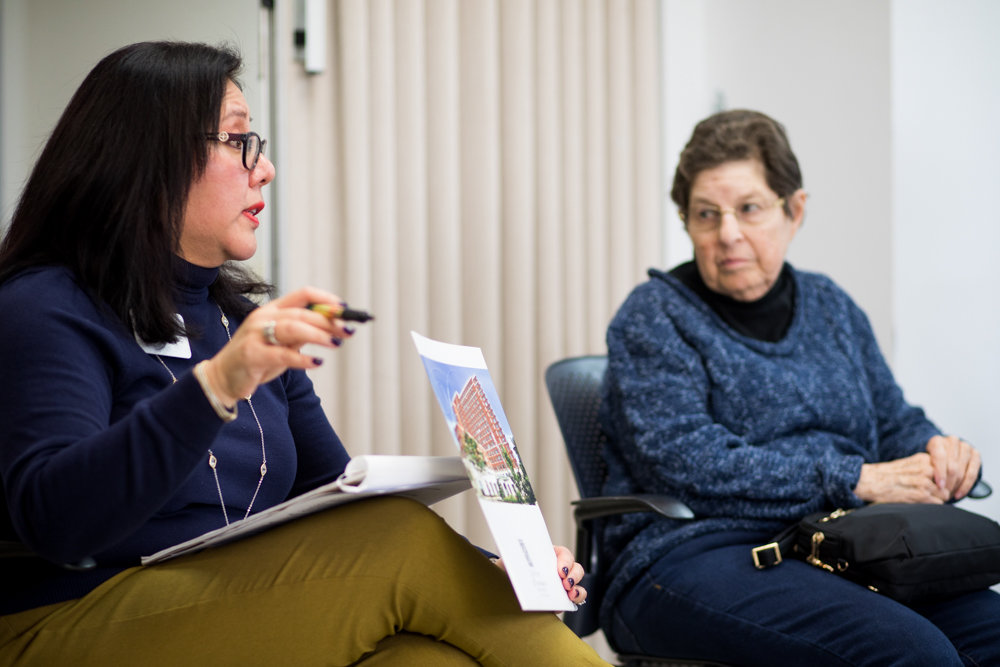 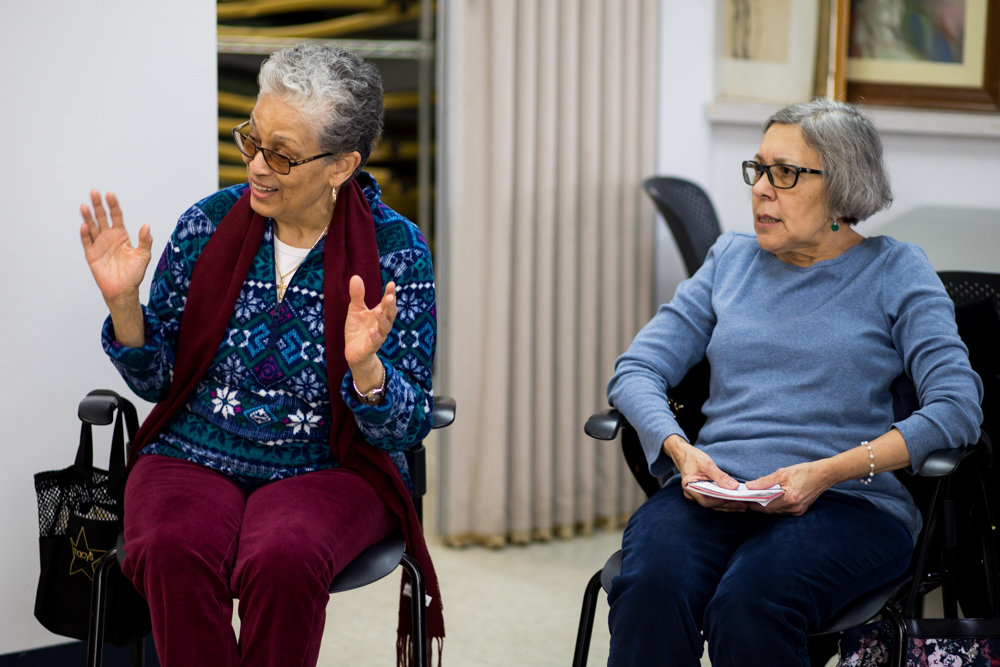 Mary Fernandez, left, talks during a meeting of the Savvy Solos Club at RSS-Riverdale Senior Services. The recently created club provides a forum for RSS members to share issues that matter to them.
JULIUS CONSTANTINE MOTAL 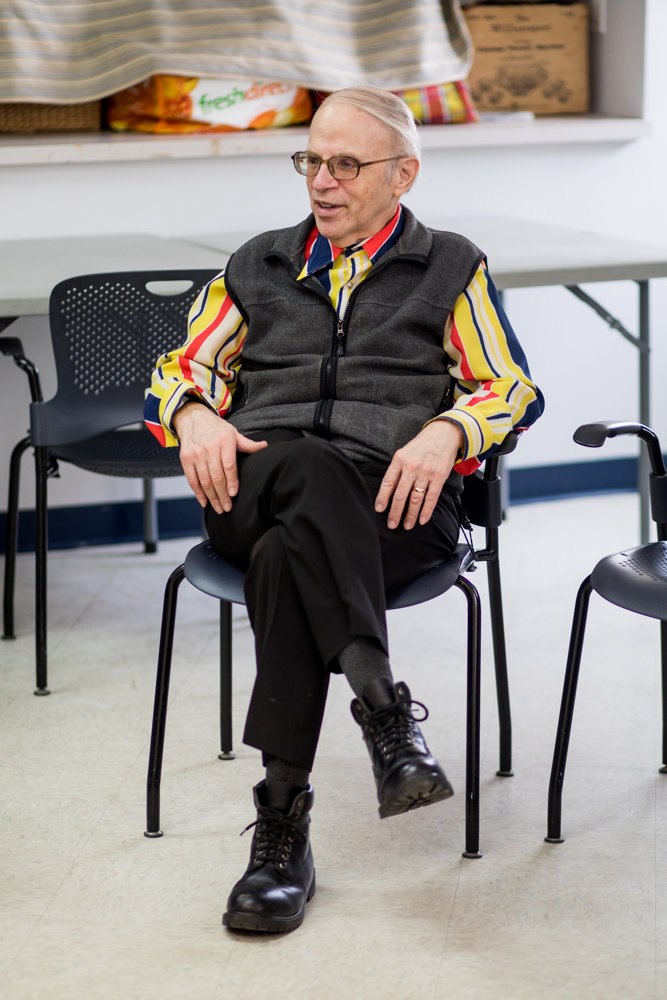 Robert Stein talks during a meeting of the Savvy Solos Club at RSS-Riverdale Senior Services, a club which provides a chance to talk about problems they've recently experienced.
JULIUS CONSTANTINE MOTAL 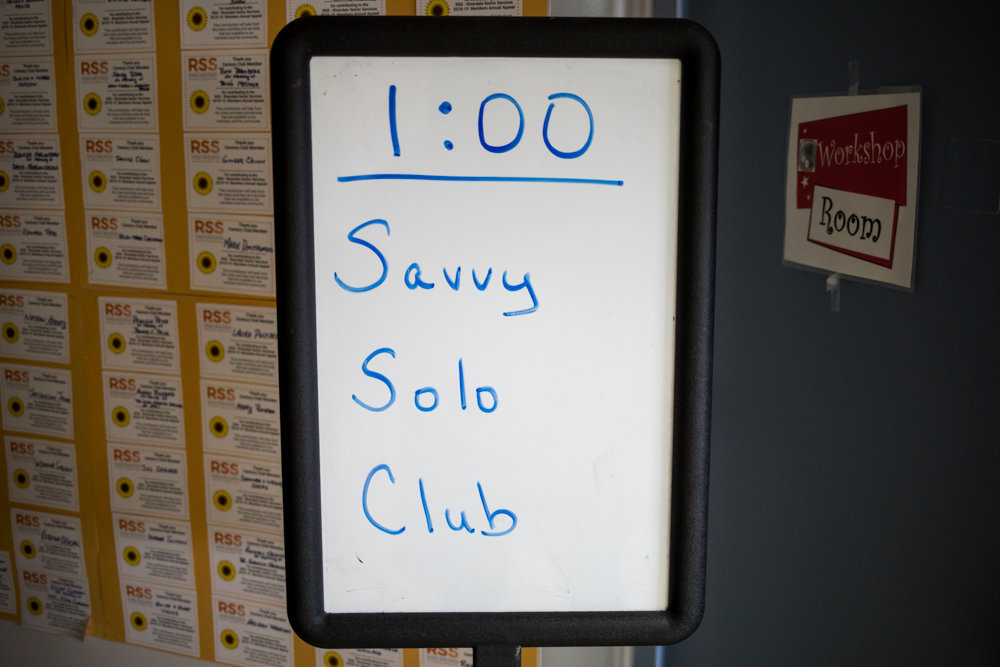 The Savvy Solos Club meets every other Wednesday at RSS-Riverdale Senior Services. The senior center recently convened the club to give members a forum to discuss quality of life issues affecting them, and to collaboratively figure out solutions.
JULIUS CONSTANTINE MOTAL
Previous Next
By TIFFANY MOUSTAKAS

Mary Fernandez had no idea what her blood type was, but something pushed her to call and find out.

That push came in the form of the Savvy Solos Club, a group for senior citizens who live alone and sometimes don’t have any family or friends nearby. The club provides them with tools to use in the event of an emergency while also encouraging them to socialize with others, meeting every other Wednesday at RSS-Riverdale Senior Services, 2600 Netherland Ave.

It was at those 1 p.m., meetings Fernandez learned all about things like how to create a living will and how to complete a power of attorney document allowing someone else to act on her behalf in case she becomes unable to make decisions.

It also got her thinking about what emergency workers or doctors might ask her if she needed medical attention, like her blood type. Savvy Solos inspired her to be prepared for anything.

“I knew I had to do these things,” Fernandez said. “But by going there and talking with other people, it gave me that impetus to do it.”

Margie Schustack and Selina Ng have run the group together since last November. Schustack is the communications and marketing director for RSS, while Ng is a social worker. Ng realized the need for such a group while talking with seniors one-on-one.

“She was finding that she was working with more people who had little family, or family that lived far away,” Schustack said.

They got inspiration from other clubs similar to Savvy Solos, quickly focusing on providing resources that make it easier for seniors to live on their own, and encourage things like putting important contact information and medication information on their refrigerators because it’s the first place paramedics will go if there’s an emergency at home.

“We’re trying to help people with things that are extremely practical in nature,” Schustack said. “So these kinds of things are tools that we give to people.”

By providing these resources, both Schustack and Ng agree it allows seniors to make important decisions now, and then focus on relaxing and having fun.

“If you deal with having your advance directive, or your living will, or your power of attorney, then you don’t have to worry about that all the time,” Ng said. “You’ve done it. You’ve taken care of the stuff that feels hard, and now you can just enjoy yourself.”

Group attendance at Savvy Solos varies between 15 and 20 each session. When the meetings first began, Ng made it a point to not only provide seniors with essential emergency resources, but to give them a chance to discuss what they wanted to learn or talk about as a group.

“It’s just basically trying to get an idea of what they do to make the time pass and how to socialize,” she said. “It’s really, really positive, and we just allow them to tell us what they’re interested in learning about.”

The added feature was an instant success.

One member shared she was unable to be with her family on New Year’s Day for logistical reasons, Schustack said. Instead, she made the most of her day by making plans with someone she met from RSS.

“There happened to be somebody else from the center that wasn’t doing anything on New Year’s Day, and they decided to just go to Manhattan and hang out,” Schustack said. “They went and saw the (Rockefeller Center) tree, they traveled all over Manhattan, and she hadn’t done any stuff like that in years.

“And it was just a wonderful, kind of empowering feeling because that’s part of what we’re trying to do is empower people to enjoy their life.”

No one is lonely

Fernandez finds herself getting to that point here in the Bronx after spending more than 50 years in Manhattan.

“When I moved to Riverdale, I sort of left my life behind,” she said. “It’s not that easy when you move to another location, especially when you’re older.”

So when she found out about Savvy Solos, she was intrigued.

“I felt somewhat lonely, and I felt I didn’t have a support group,” Fernandez said. “And when they started the Savvy Solos, I said, ‘Well, let me check it out and see how it is.’”

Since then, Fernandez has found she is more assertive. It even motivated her to meet another senior in her building after not knowing any of her neighbors.

“I really didn’t have anybody that I could say, ‘Well, I know this person in case something happens,’” she said. “And as a result of attending the meetings, I made it my business to try and touch base with somebody, and now that person has my number and I have her number.”

Robert Stein had Savvy Solos come into his life at the right time. His wife passed away more than a year ago and he was looking “to be with other people who are alone” and living alone.

And he found them.

Based on his positive experience, Stein hopes more seniors in the community who live alone will want to join.

“I think we need to have more people,” he said, “because I’m sure there are a lot of people out there.”

Looking ahead to the future of the Savvy Solos Club, Schustack and Ng hope to bring more of a social aspect to the group by providing opportunities for members to do things on the weekends, like a see a Broadway show.

But for now, the club serves as a way for people like Stein to prepare for the future, while also appreciating the present.

“It has benefited me in meeting different people, giving me different ideas on preparedness in case of any emergency,” he said. “It has given me some hope that I don’t have to be alone or lonely.

“Alone is something by choice. Lonely is not by choice.”