A call to end police brutality

Rumors swirl, but no one knows from where 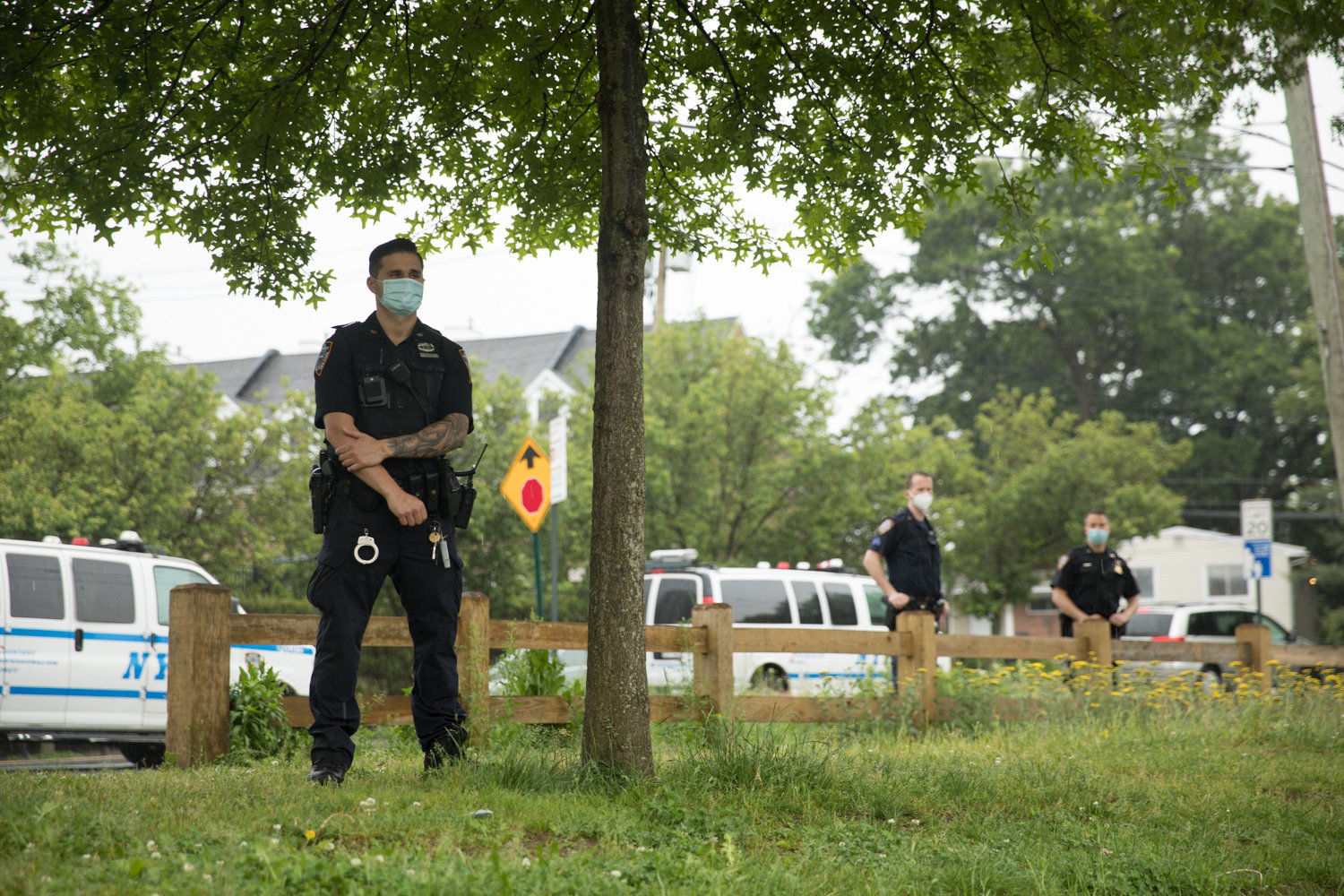 Police officers watch a vigil at Seton Park remembering those who died as a result of police brutality. Initially, there were rumors of a violent protest planned for the Riverdale park, and to that end, local co-op boards sent out warning letters to residents. The rumors, however, were unsubstantiated, and Sasha Kessler organized a peaceful vigil in response.
JULIUS CONSTANTINE MOTAL 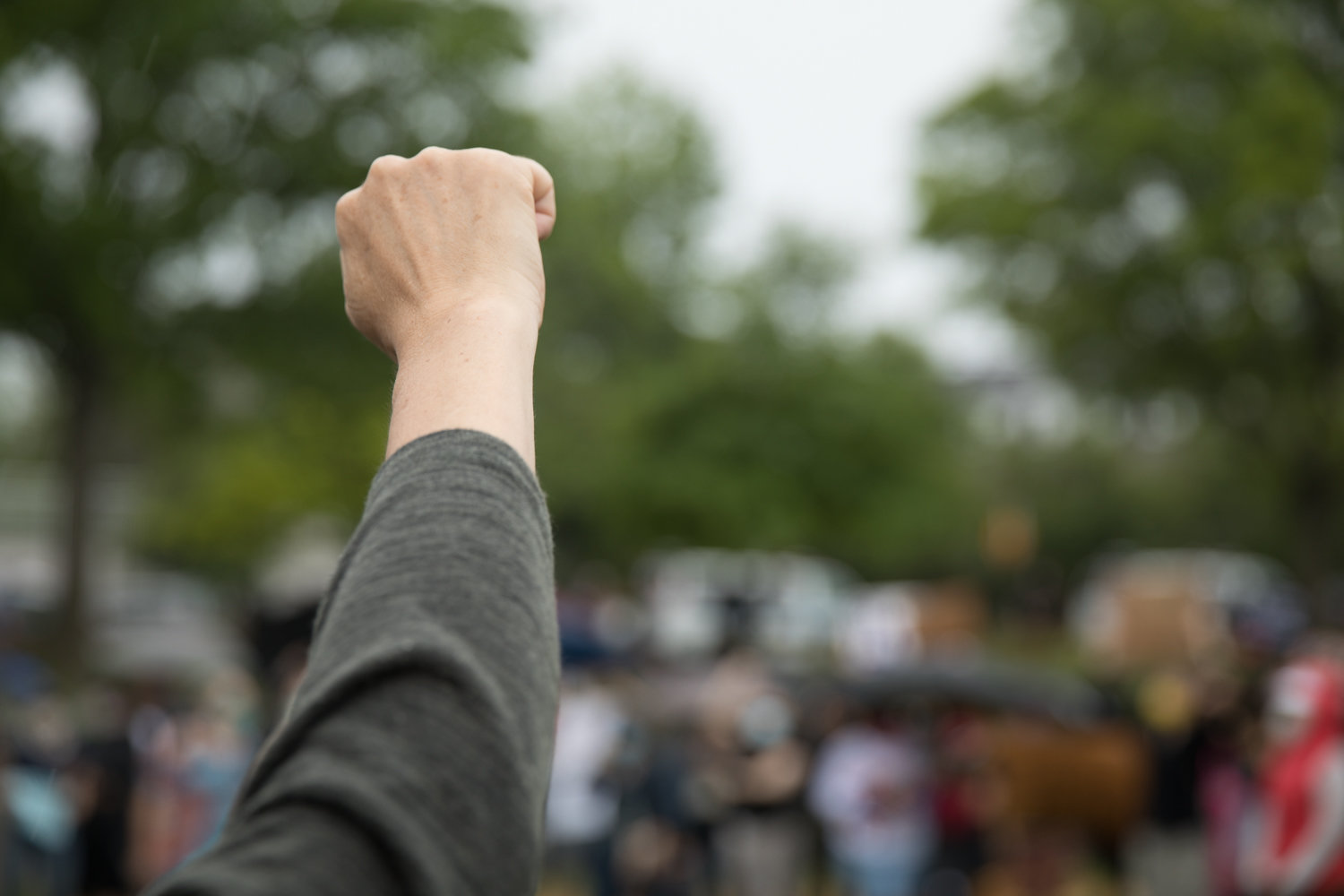 A community member raises her fist at a vigil in Seton Park honoring the lives of African Americans who died as a result of police brutality. The peaceful gathering was organized following rumors of a violent protest planned for the park that turned out to be untrue.
JULIUS CONSTANTINE MOTAL
Previous Next
By ANTHONY CAPOTE & KIRSTYN BRENDLEN

Fear and panic swept across the community early last week as rumors swirled through co-op boards and then social media about a violent protest planned for Seton Park.

It started on Tuesday, June 2, when several of Riverdale and Spuyten Duyvil’s co-operative housing communities sent out letters warning residents of a planned demonstration at the Independence Avenue park. Many of the letters, including one from the Whitehall Club — the spa and health club attached to the co-op of the same name — warned residents of increased police presence, street closures and barricades.

“There will certainly be a greatly expanded police presence in the area, and possibly extensive media coverage of the event,” according to the letter. “Whitehall management is taking steps to enhance our building security, including security guards to be stationed as needed, and possible entry and exit door closures.”

The Whitehall, located between Seton Park and the Henry Hudson Parkway, was not the only building to distribute such letters. They were joined by Briar Oaks and the Skyview Apartments in North Riverdale also sent out notices explicitly warning residents of potential violence at the protest.

On social media, a post on a popular Riverdale Facebook group about the Whitehall Club letter garnered 165 comments. Many simply questioned the veracity of the demonstration and why members of the co-op boards from the various buildings who sent notices expected such an expansive police response.

Others, though, called for residents to arm themselves in the event of protesters trying to invade their homes.

Many other group members, however, questioned why people were so scared of a few protesters in a nearby park.

Jennifer Scarlott, a local activist who also is the director of the North Bronx Racial Justice group,  took issue with what she called racially charged implications of both the warnings from co-op boards and the comments she saw online.

“The notice, for example said, ‘Make sure to remove your valuables from your cars,’” Scarlott said.  “I’m sorry, but that’s an overtly racist implication that there may be folks of color coming to our neighborhood. It’s not far off as dog whistle for white fear.”

But no matter how people responded to the posts from local co-ops, there was one gaping hole in all of that discourse: No one knew who was organizing the protest that had many up in arms. In fact, it’s possible no one was organizing anything at all. Beyond the letters from local co-op boards, the only publicly available place where the protest was mentioned was on the Instagram profile JusticeForGeorgeNYC, which has more than 177,000 followers.

Since mass protests began in New York on May 30, JusticeForGeorgeNYC has posted daily updates on where to find demonstrations in all five boroughs. On June 3, the page uploaded a photo claiming the Seton Park demonstration had been canceled. That post has since been deleted, but not before Sasha Parsley Kesler commented on it, saying there would still be a vigil in the park that day — but not anywhere near the fashion the co-ops and apartments had warned about.

Kesler and her mother both received warnings from their apartment buildings near the park, and she saw the rumors circulating on social media.

“I am decently connected into a lot of the organizing work in New York City,” she said. “I was like, ‘I feel like I would have known something, it seems very odd, I can’t figure out who this is from.’”

Ultimately, Kesler realized there was no protest planned — no organizer ever materialized, and she could never track down the origin of the plan.

Angry at the response she was seeing from her neighbors, Kesler used social media to pull together a vigil of her own in just a few hours Wednesday morning, posting on Instagram and creating a Facebook event. Those plans paid off, attracting an estimated 200 people to Seton Park.

But none of these strange and visceral reactions to the initial rumors of protest at Seton Park ultimately get at the fundamental question: Was there ever a protest scheduled at Seton Park before Kesler got involved? And if there wasn’t, where did the various Riverdale and Spuyten Duyvil co-operatives get that idea?

Each co-op board notification sources the news to the New York Police Department. When pressed further by reporters from The Riverdale Press, nearly every organization who sent out a notification said they had received their information from someplace other than the 50th Precinct.

The first co-op to break the news of the “violent” protest was the Whitehall Club, which also sourced the NYPD. But Jeff Moerdler, the president of The Whitehall’s co-op board, said someone else told him and the board about the protest, and it was that person who said they had spoken to police.

Moerdler would not name his source, who prompted the Whitehall Club’s letter, but maintained that neither he nor the letter he sent to residents ever mentioned potential violence.

“We sent out that letter the same way we would send a letter about any event in the park,” Moerdler said, adding the Whitehall Club makes it a habit of informing people of events in the neighborhood that may or may not impact those who live there.

Meanwhile, the 50th Precinct maintains they never informed anyone of any protests at Seton Park. Much of the police department’s information on upcoming demonstrations and protests come from social media, Officer Mercedes Conejo said. Police would hesitate to call any protest potentially violent because it is virtually impossible to predict that in advance.

“It’s not like some kind of organization that goes out and fills out a permit in order to have an event or some kind of rally,” Conejo said. “It’s nothing organized, nothing that we’re aware of.”

Kesler called the 5-0 twice on the morning of the protest to make sure they didn’t need a permit.

“It seems like from their impression, all they knew about were these rumors,” Kesler said. “They never called The Whitehall, nor did they call the businesses. So that to me really confirmed that this has all been some kind of viral rumor.”

Even the JusticeForGeorgeNYC Instagram account — which has kept track of protests as they’re organized across the city — wasn’t sure where the rumor started.

“The person who’s running it was just like, ‘No, we heard a rumor that there was a protest, so we posted it,’” Kesler said. “But they never had concrete information, either.”