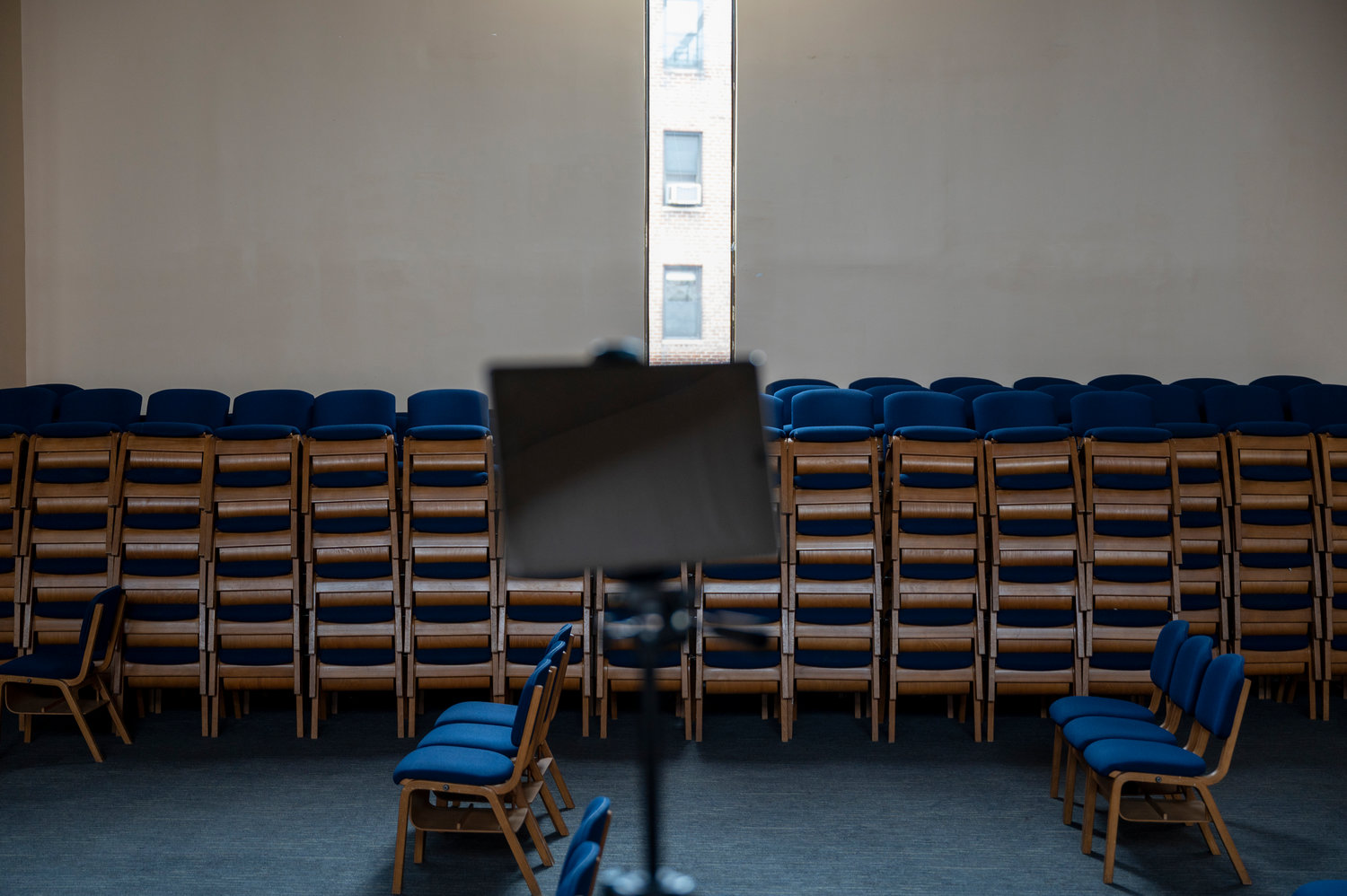 Technology has been a key part of getting the Hebrew Institute of Riverdale through the pandemic, says Richard Langer, its executive director. Langer believes holding more programs online has helped his synagogue expand its geographic reach beyond the neighborhood.
HIRAM ALEJANDRO DURÃN 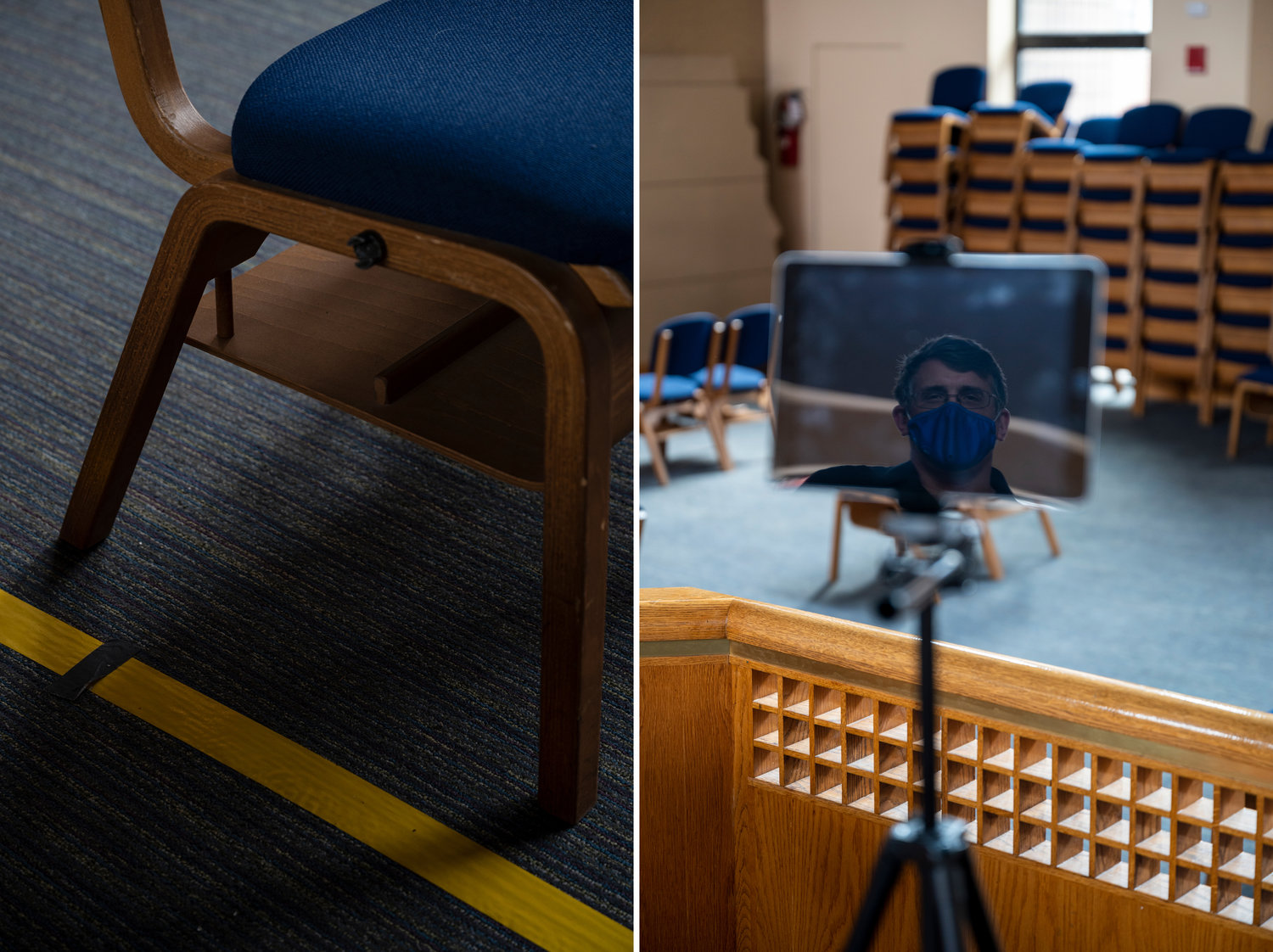 Richard Langer, executive director of the Hebrew Institute of Riverdale, says people are allowed to pray in person at his synagogue, but only at 10 percent capacity and everyone socially distant.
HIRAM ALEJANDRO DURÁN / Illustrator 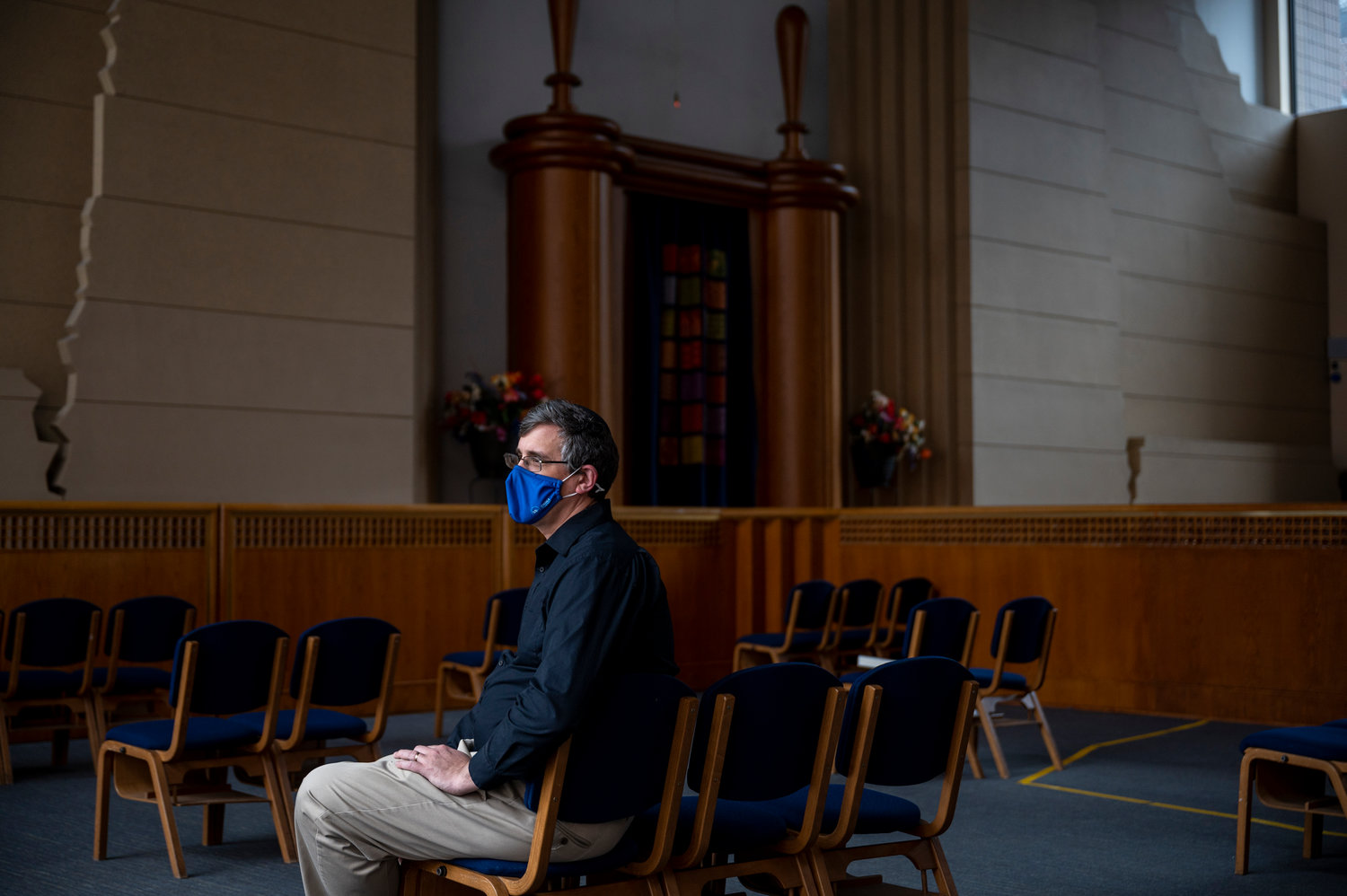 The Hebrew Institute of Riverdale has expanded its geographic membership because its hosts programs through online video streams, Executive Director Richard Langer says. It’s one of the ways the pandemic has pushed Langer’s synagogue to change for the better, he says.
HIRAM ALEJANDRO DURÁN 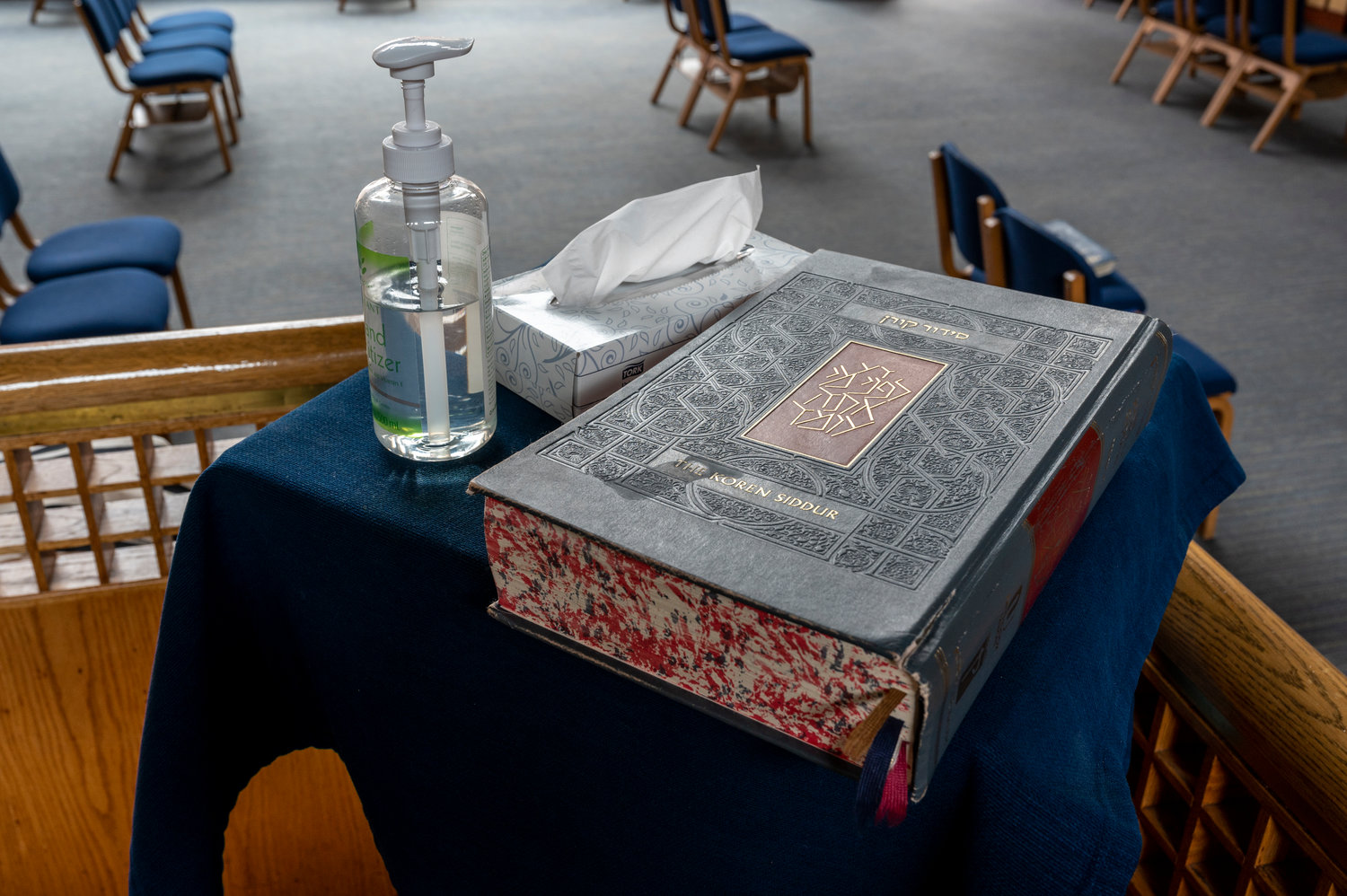 One way members stay safe from the coronavirus during services at the Riverdale Jewish Center is by not sharing prayer books, says Oren Hiller, the synagogue’s executive director.
HIRAM ALEJANDRO DURÁN
Previous Next

‘There’s something different and nice about seeing people who might not have connected otherwise with the community because they don’t live here.’”
Richard Langer, Hebrew Institute of Riverdale
By ETHAN STARK-MILLER

That’s a question on the minds of many seeking pre-pandemic normalcy inside a society that may have been permanently changed.

It was certainly a question on the minds of Richard Langer and Oren Hiller during a recent conference with other Jewish leaders. Langer runs the Hebrew Institute of Riverdale. Hiller, the Riverdale Jewish Center. And both networked with their counterparts from 400 other Orthodox Union synagogues from across the country wondering aloud what 5781 — or 2021 for most everyone else — will bring.

Yet, while some might expect this to be a long dialogue of “troubling times,” Langer instead trumpeted one silver lining in the dark COVID-19 cloud: Allowing synagogues like his to evolve in meaningful ways.

“It’s an opportunity, as we restart, to question things that might have been done by habit before,” Langer said.

More recently, with synagogue doors allowed to reopen again, The Bayit on Henry Hudson Parkway adapted to multiple smaller services, Langer said, instead of one larger one. Each service is able to put together a minyan — a minimum of 10 Jewish men that is traditionally required for prayer among many Jewish congregations, especially Orthodox ones.

Yet, that does mean a lot of empty seats in a space that typically holds up to 500 people, Langer said. Now, the Hebrew Institute can welcome only 50 at a time.

But even that has a positive note, Langer said. Smaller services make it much harder to hide in a large crowd. That means it’s far easier to become more active in a service.

Both synagogues hold in-person services with a remote option, except on Shabbat, while the rest of their programs are exclusively remote. This has allowed the Jewish Center to expand its reach geographically because the internet provides no physical limitations, as long as someone has a way to sign on.

“We had a whole series of classes that we did, it was three Wednesdays in a row. We had over 100 people on that,” Hiller said. “But they were not only from Riverdale. They were from all over the country, and even from Israel and some other places.”

The Hebrew Institute also has witnessed a rise in participation from people outside of the community thanks to virtual programming.

“There’s something different and something nice about seeing people who might not have connected otherwise with the community because they didn’t live here,” Langer said.

A lot of this increased engagement is coming from word-of-mouth, Langer said, and from those who used to live in the neighborhood and belong to the temple but have since moved away. It’s not thousands of people — but it is a significant number.

However, Langer said it’s still an open question whether this growth from outside the community will continue after the pandemic ends.

In addition to holding multiple spaced-out prayer sessions, both synagogues have taken a number of other steps to ensure congregants can pray in safety.

One requires attendees to register for specific prayer times in advance to ensure the Jewish Center doesn’t go over capacity.

And there’s also the outdoor rooftop playground area, Hiller said, which is the perfect place to pray for those not comfortable enough with going inside.

“I have to give a lot of credit to the people that still … want to daven (pray) with everybody together, but they don’t feel comfortable coming inside,” Hiller said. “And they show that commitment by still being outside davening in full winter coats and hats and gloves. You know it’s 15 or 20 degrees outside, but they’re still there.”

And then there are the holidays like Purim coming up in a couple weeks, which outside of a pandemic would have attracted significant crowds. The Jewish center will close off West 237th Street between Independence Avenue and the Henry Hudson to host a larger open-air outdoor celebration.

But that won’t be so easy when the High Holy Days like Rosh Hashana and Yom Kippur roll around in the early fall. Hiller hopes enough people will be vaccinated by that time, allowing larger services to return inside the synagogue.

Synagogues aren’t the only houses of worship contending with the “new normal” and life after the pandemic. Riverdale Community Church, a Spanish-speaking non-denominational congregation on Albany Crescent, has dealt with many of these same questions.

The church holds two services on Sundays instead of one, Pastor Gonzalo Rodriguez said, and those wanting to travel to the Kingsbridge church need to call ahead and ensure there’s enough socially distanced space in the sanctuary. For those who don’t feel comfortable praying inside, there are online offerings through both the videoconferencing app Zoom and on Facebook.

While the adjustments at Hebrew Institute of Riverdale have been working, Langer believes nothing can replace the energy that comes from bringing a large group together to pray in a physical space. It’s almost like a theatrical performance, where every congregant has an important role to play.

Similarly, physical contact is an important part of prayer for Rodriguez’s congregation — something he’d like to bring back the moment public health officials give a thumbs up.

“That’s really the goal,” the pastor said. “We have to go back to where there’s contact and when you pray, you can lay hands on (other congregants). That’s how we believe. So, those are the types of things that we would love to see.”