School doors reopen, for some all week 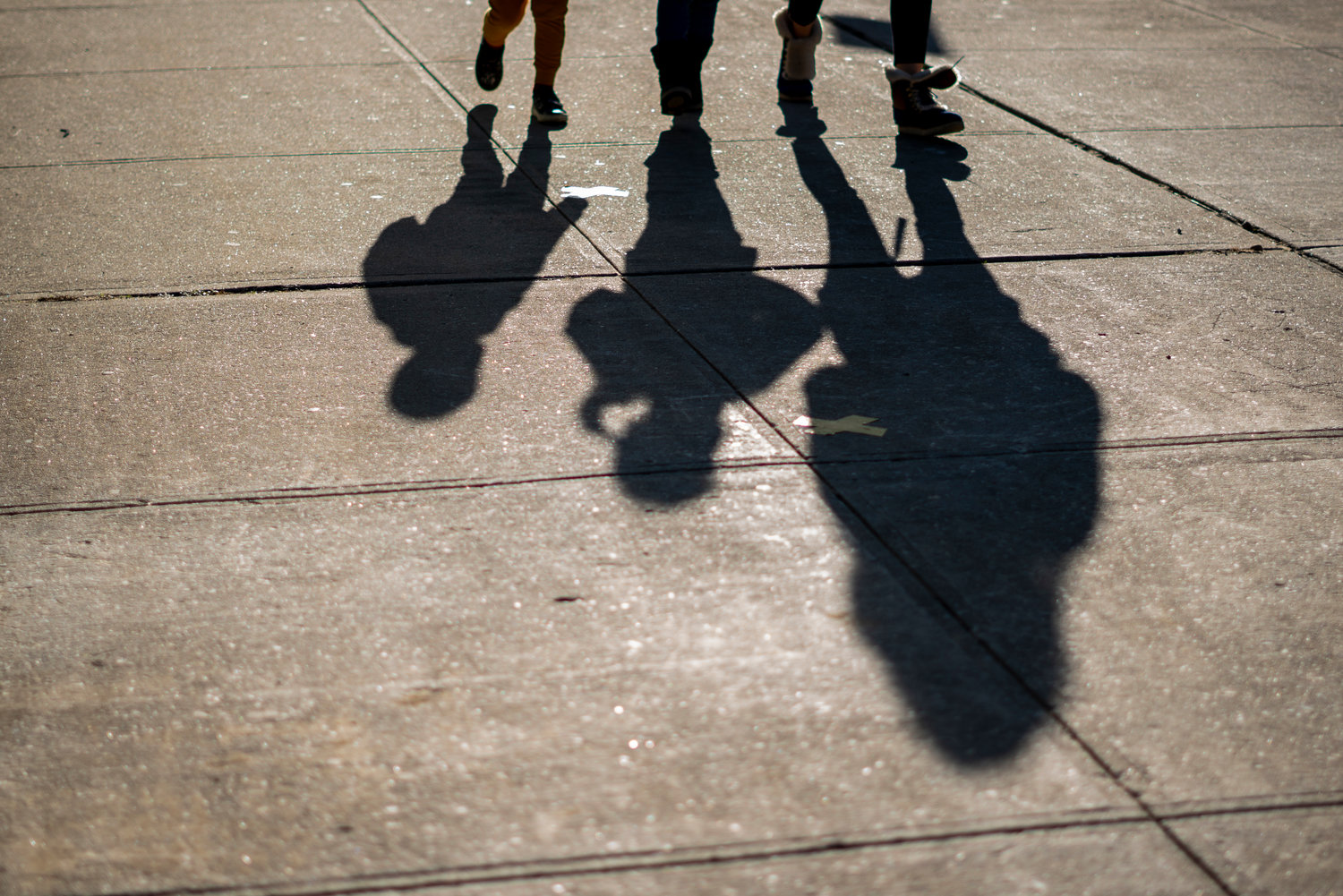 While city officials now seem to advocate keeping younger students in classes on physical campuses five days a week instead of just two or three, some schools aren’t in a position to do so. P.S. 24 Spuyten Duyvil and AmPark Neighborhood School — both of which reopened Monday — will not offer this option for the immediate future.
HIRAM ALEJANDRO DURÁN 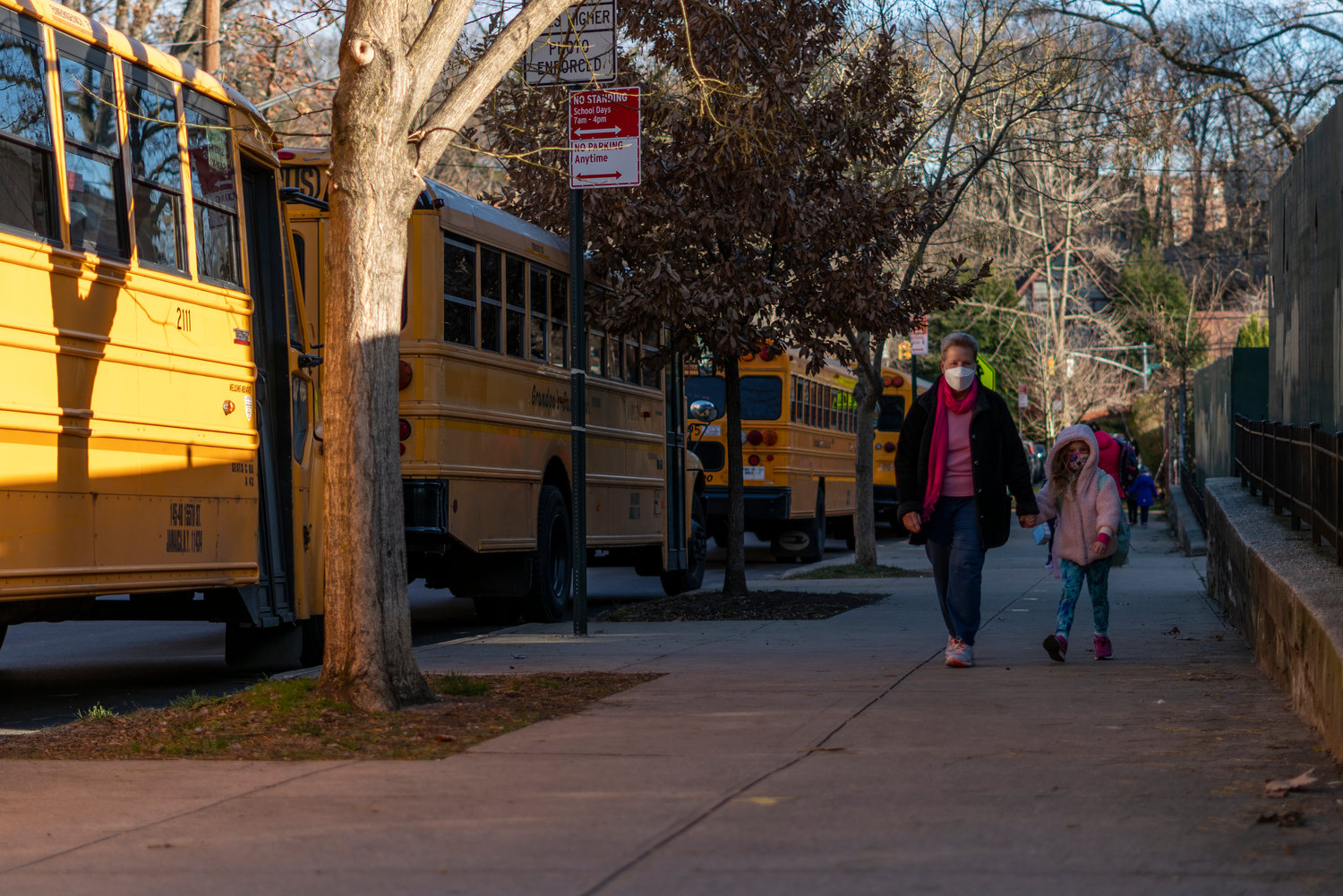 The city’s latest school reopening plan ushered in several changes to coronavirus policies and procedures. Among them are increased coronavirus testing, and five-day-a-week in-person learning in schools that can accommodate it.
HIRAM ALEJANDRO DURÁN 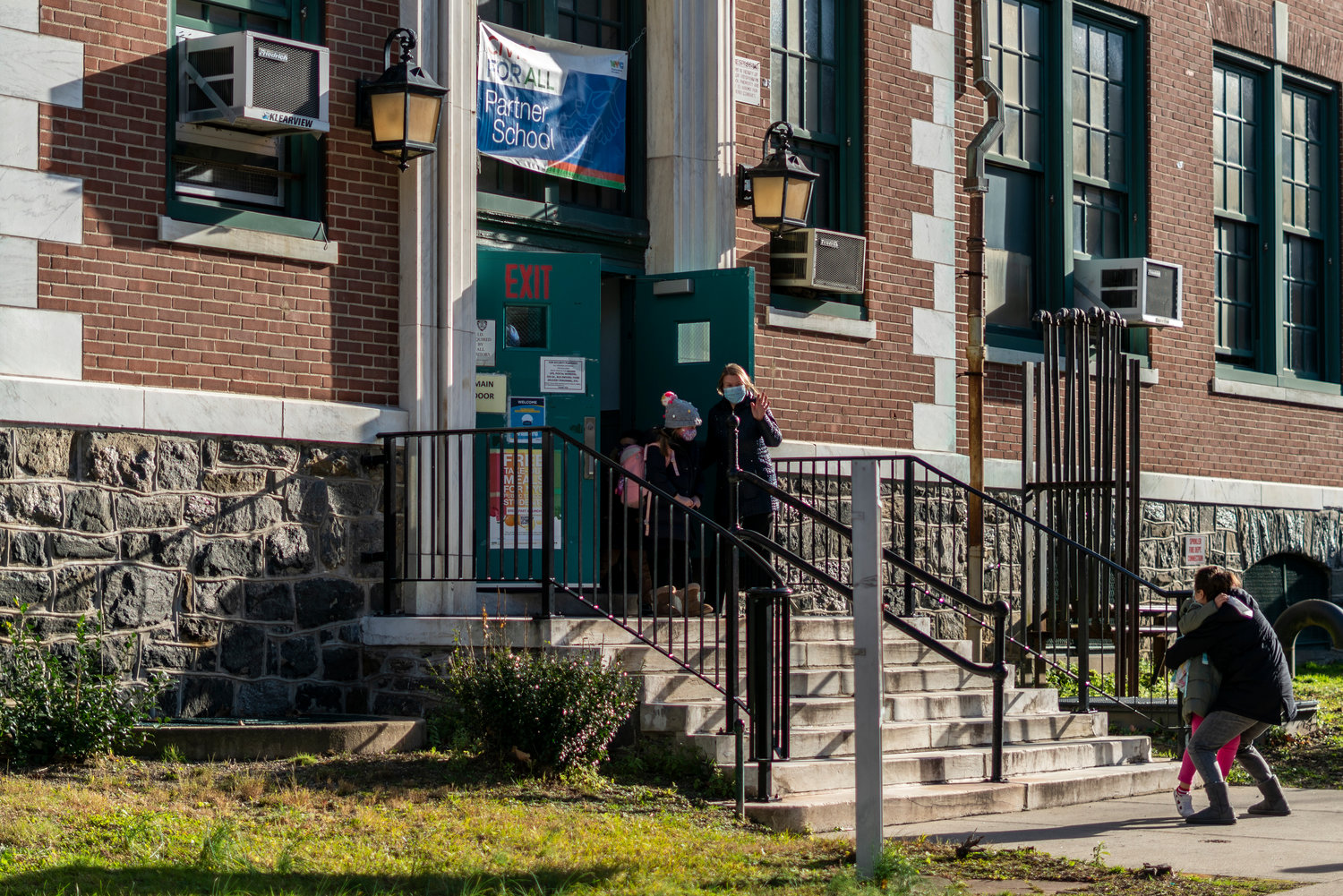 Many parents — and now even some city leaders — believe offering as much in-person classroom time for younger students and those with disabilities should be the immediate goal of school reopening. Preschool, elementary and District 75 school buildings reopened this week, but there’s no reopening date in sight for the city’s middle and high schools, which are continuing fully remote in the wake of rising positive coronavirus infections in the city.
HIRAM ALEJANDRO DURÁN 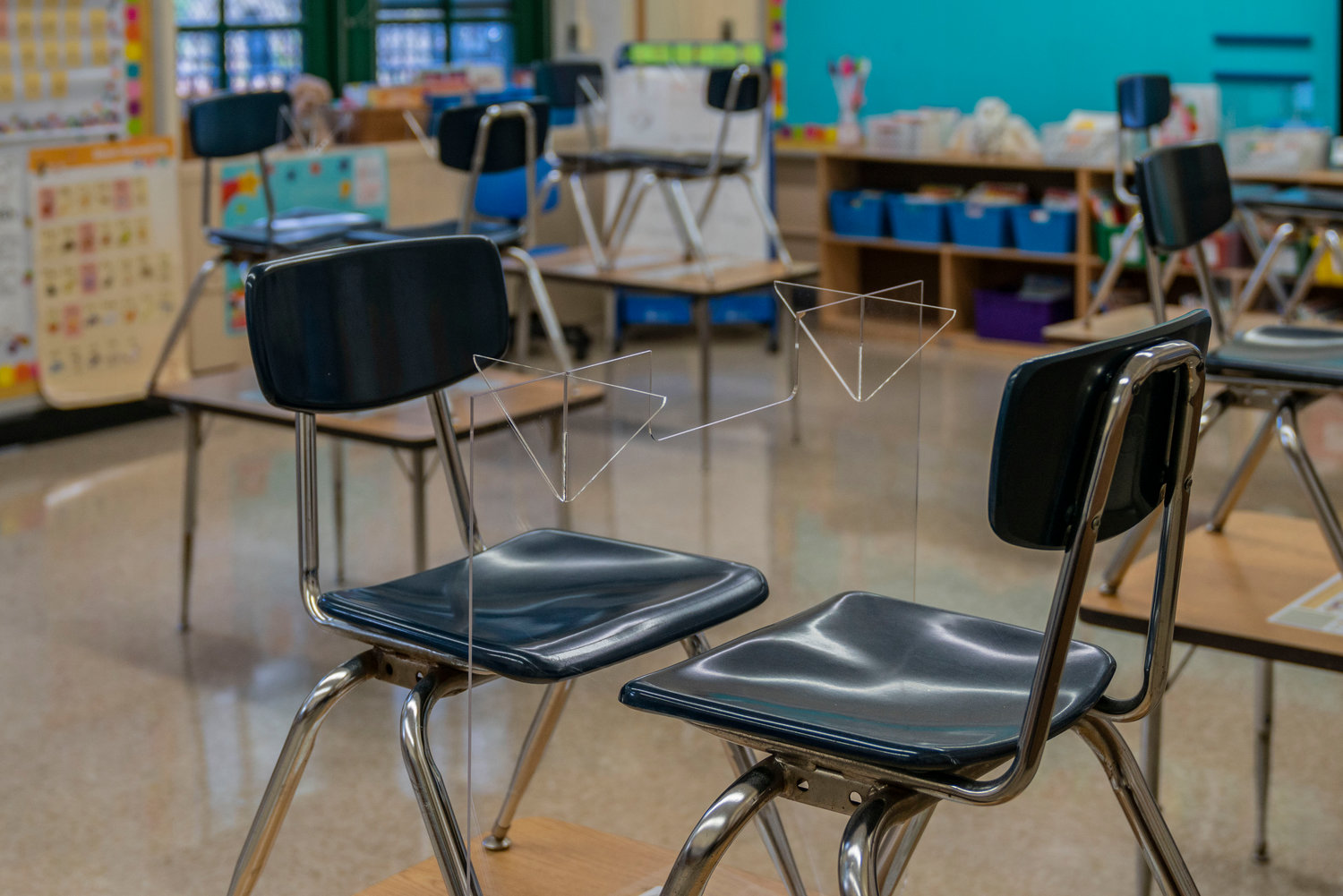 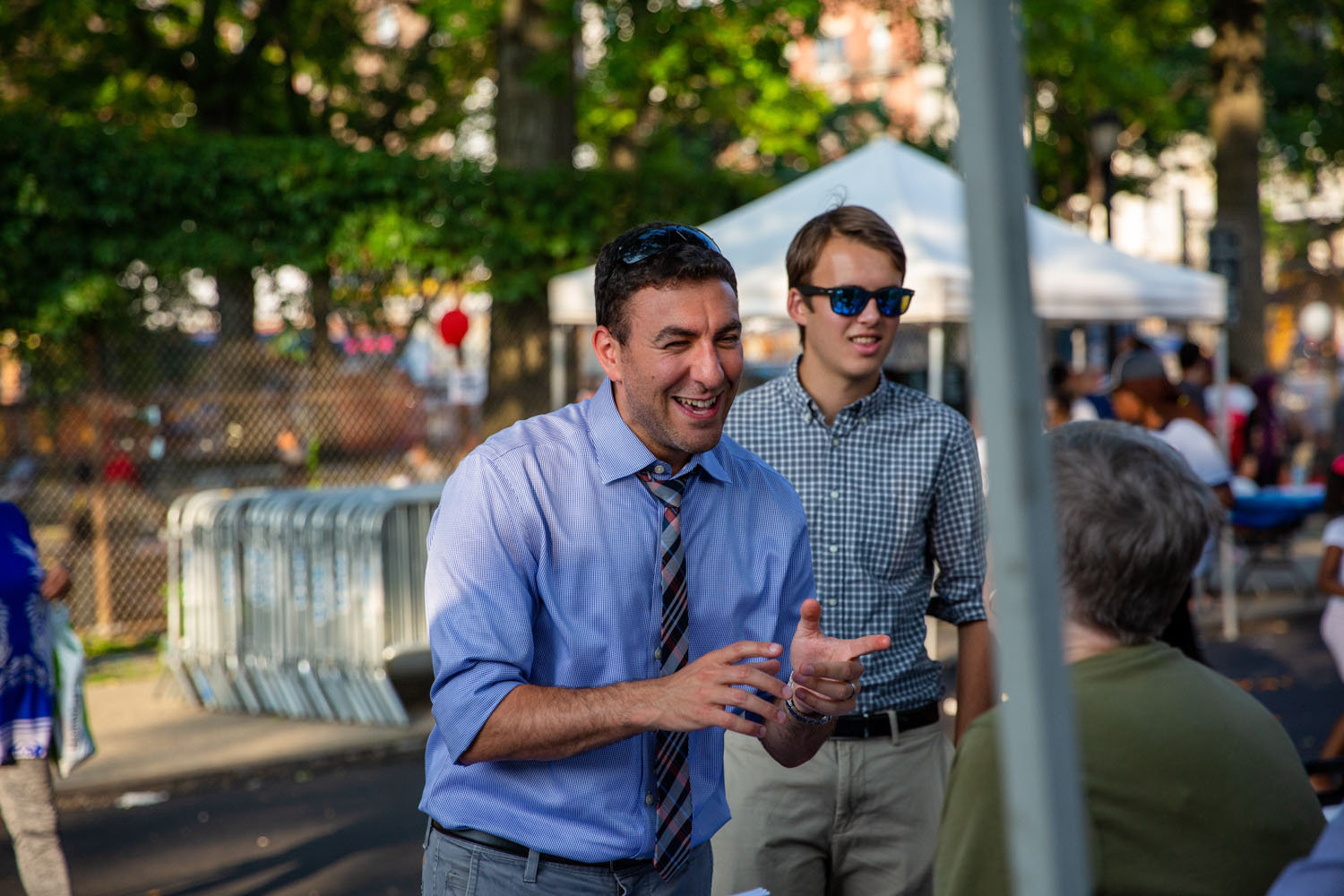 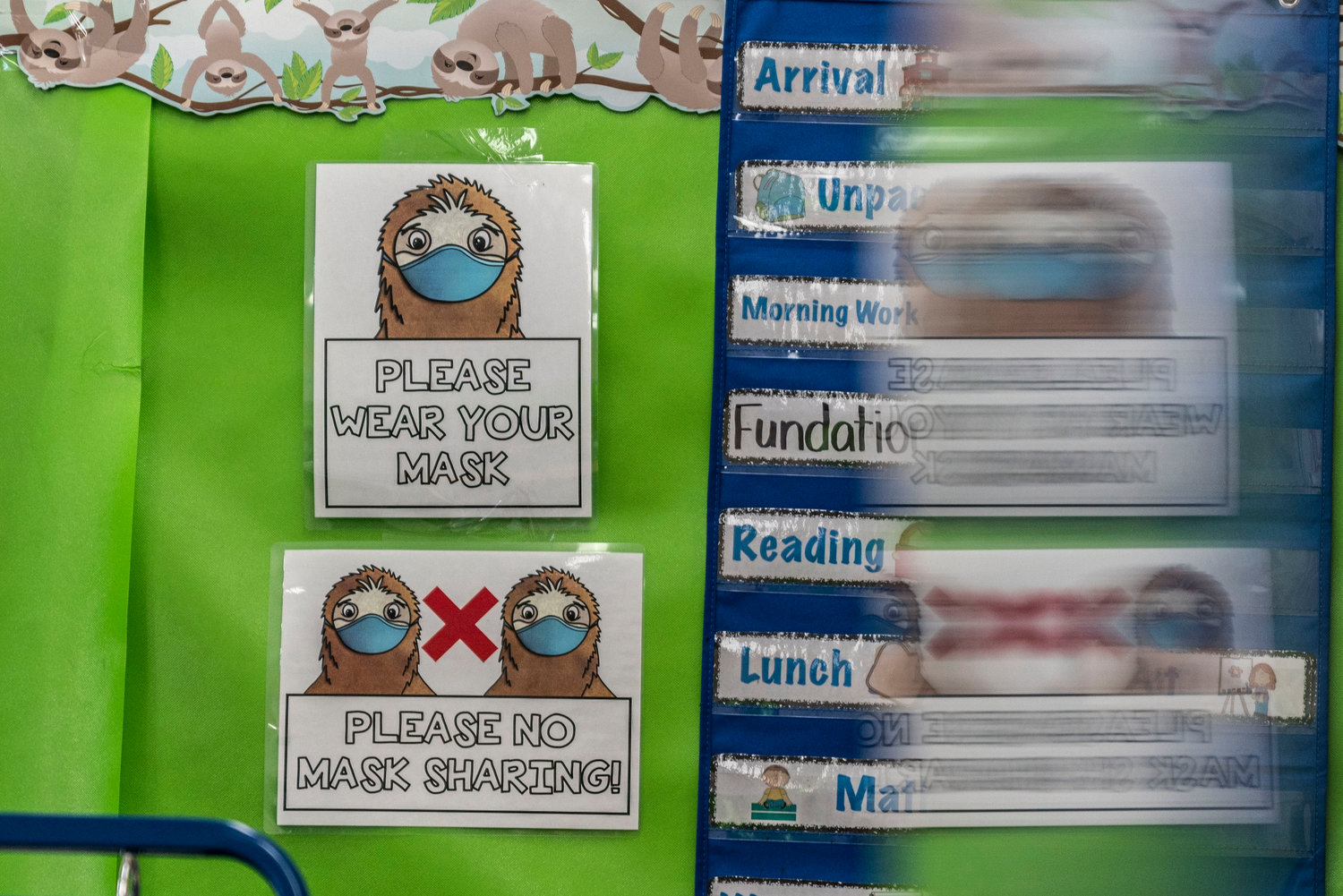 The city’s latest public schools reopening plan encourages campuses to offer in-person classes five days a week instead of two or three — if they can do so safely. This mirrors a proposal from several parents at P.S. 24 Spuyten Duyvil last fall who petitioned city’s education department to do just that for kindergarteners, first graders and students learning under individualized education programs. P.S. 24 has no immediate plans to offer in-person classes five days each week.
HIRAM ALEJANDRO DURÁN/ File 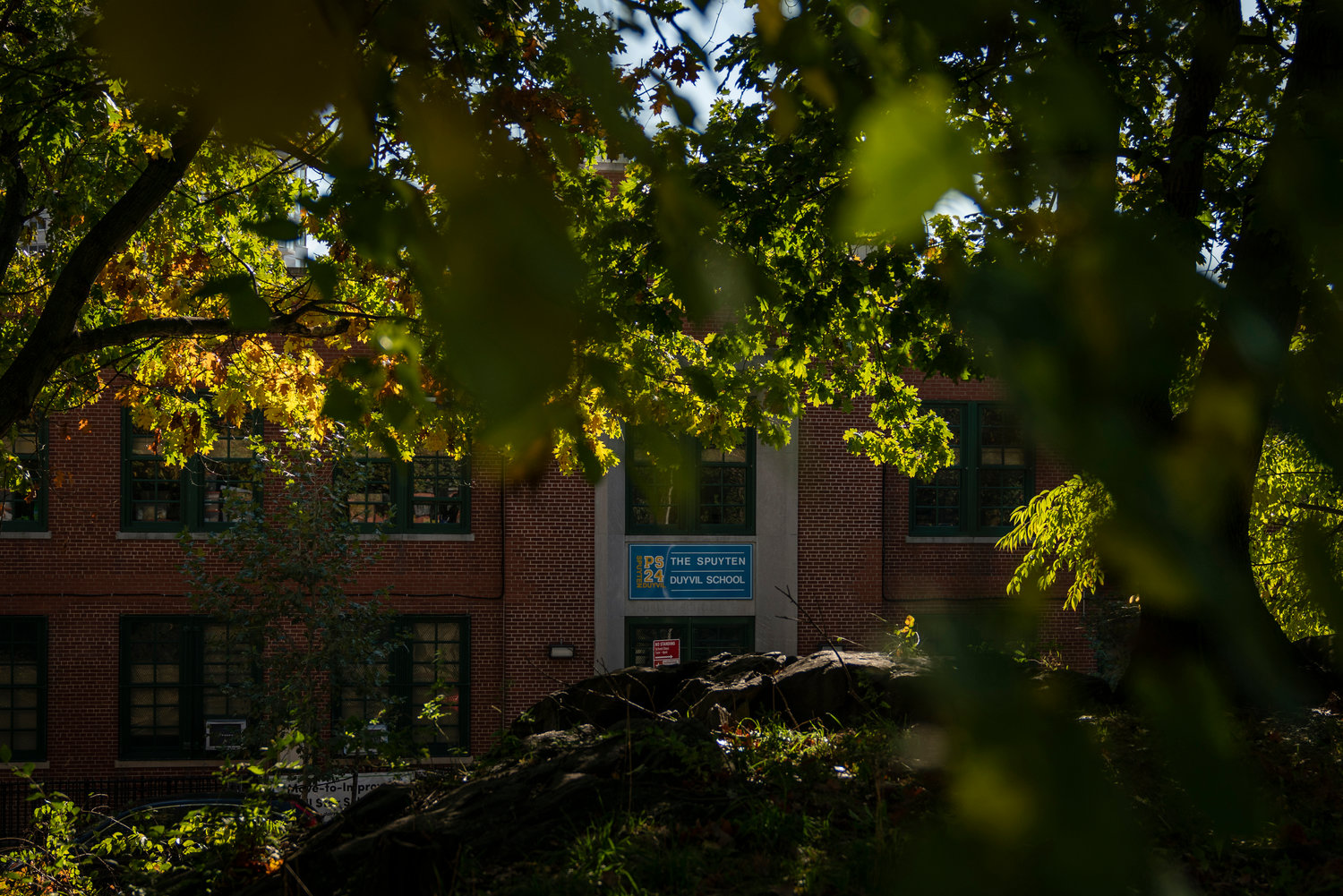 Preschool and elementary school buildings across the city reopened Monday following a nearly three-week fully remote period ushered in by the city’s rising weekly positive coronavirus test rate. But with the latest reopening came new guidelines, including one encouraging schools to offer in-person classes five days a week instead of two or three.
HIRAM ALEJANDRO DURÁN/ File
Previous Next

‘For any school that does have the space and the ability to move to five-day-a-week in-person instruction, that will now be the preferred model.’”
Mayor Bill de Blasio
By ROSE BRENNAN

After a little over two weeks of schools offering nothing but remote learning after a spike in coronavirus cases, Mayor Bill de Blasio remains committed to finding a way for some schools to reopen physical campuses. Even encouraging schools that can to let students travel to school five days a week, instead of the two or three found in the existing hybrid learning models.

Campuses have reopened under de Blasio’s “phased-in” approach — a plan that as of right now seems somewhat incomplete. Only students in preschools and elementary schools returned to their physical classrooms on Monday. Students in specialized District 75 schools are set to return Thursday.

But there’s not really a plan on deck for the city’s middle and high school students, although de Blasio hinted they might not see the inside of a classroom until the new year.

The plan to return to campuses has ushered in some new policies and procedures for the city’s public schools, especially as positive coronavirus cases in the city — and across the country — continue to rise. First, the 3 percent threshold for the city’s weekly positive coronavirus test rate that shuttered the public schools last month is going out the window — as preschool and elementary school students returned Monday with the weekly positive test rate hovering around 5 percent.

Second, the city called for more extensive coronavirus testing in public schools. While they’re still working some logistics out in terms of how that will happen, two components of the plan are set in stone.

First, random coronavirus testing will happen weekly as opposed to monthly. And second, only students whose parents consent to such testing will even be allowed back on campus. Those not willing to be tested will continue to attend classes, just remotely.

But it’s de Blasio’s encouragement of school administrators to let students return all week instead of just part of the week that’s making some waves in the city.

While this call for expanded in-person learning happened on the city level, there were hints of it far more locally long before. A group of parents at P.S. 24 Spuyten Duyvil led a charge for five-day-a-week in-person learning last fall — but just for kindergarteners, first graders, and students with individualized education programs.

The city, however, calls for such learning across all elementary school grades, not just the youngest ones. Ironically, P.S. 24 parents already have been told in-person learning five days a week for all students just can’t be accommodated.

Nevertheless, Djelena Blair, whose son attends P.S. 24, believes maximizing in-person learning is best for elementary school students. To her, it isn’t just about overcoming the academic challenges of remote learning — it can also prompt social interactions younger students might be missing out on when learning from home.

Younger children are “not subjected to a variety of other people in their free time, while teenagers go out without their parents (and) hang out,” Blair said. “Meanwhile, the younger children benefit a lot from being in-person.”

Not all ideas were implemented

The new reopening plan also mirrors some other calls from the city’s high school students. Before the academic year even began, a group at Bronx Science asked Gov. Andrew Cuomo to make all high school instruction exclusively remote. That would allow physical high school campuses to instead be used by students with greater educational needs — like younger pupils and those with disabilities.

Gabriel Lipschutz, one of the Bronx Science students who authored the letter, is somewhat satisfied with the mayor’s latest reopening plan. He believes it prioritizes in-person learning for the groups that need it most, but seemingly fails to use the largely vacant high school buildings to accommodate more in-person learning for students returning to the physical classroom.

Nevertheless, Lipschutz is happy some of the students who need more in-person instruction will get it, even if it means less time in the building for him and his peers for what’s supposed to be his senior year.

“I know there are some people who miss it,” Lipschutz said. “But I guess we all have to make compromises during these times. And the important thing is getting the younger ones back.”

While some think the mayor’s plan is a good start, others argue it doesn’t go far enough, especially for students with disabilities. While the included District 75 schools also are slated for in-person learning all week where possible, their school buildings reopened later in the week than preschools and elementary schools.

Furthermore, not all of the city’s students with disabilities attend District 75 schools. Some of them attend non-specialized public schools, and if they happen to be in middle or high school, they’re not going back to the physical classroom any time soon.

Eric Dinowitz is running for Andrew Cohen’s city council seat, but he’s also a special education teacher at a non-District 75 high school. He’s worried about the long-term effects remote and hybrid learning might have on his students.

“Our children with special needs are very often struggling to begin with,” Dinowitz said. “Introducing an entirely new system with less contact with their support services is going to have an outsized impact on them.”

Dinowitz believes more transparency and communication is needed between school officials and teachers, families and students when major decisions like reopening are on the table. If that happens, parents and teachers can make plans that best suit the needs of their students and children — whether it’s opting into in-person learning, having access to support services, making child care arrangements, and acquiring computer devices and internet access for remote learning, among other things.

If that doesn’t happen, the impact could be devastating. Especially for the city’s more vulnerable students.

“The parents I work with are all figuring out how to best support our children,” Dinowitz said. “But it’s very clear that, to me, children with special needs are going to suffer the most through this.”